I woke up with the sun on Monday morning. It trickles in my windows as it rises over the hills that surround my new home.

I now live in the middle of nowhere.

But today, I would drive to Austin- a place where I am much more comfortable- to see a living legend. I don’t quite feel ready to start being HRC again, but seeing Robert Plant for my first show back here felt like it should be part of my story.

I fumbled for my phone lying next to me, and turned on ‘Tangerine’. It’s one of my favorite songs of all time, and it’s been showing up on the setlist. I saw that it had been played at the last show, so I figured chances were slim to hear it that night. But I laid there with my eyes closed and willed it to be played. My soul needed it.

Me and my new hot rod cruised to Austin in the rain, which I also willed away before the show. Cue ‘The Rain Song’. Stubb’s is an outdoor venue with a dirt floor, and that does not mix well with rain. Luckily the sky cleared and it actually made the evening a pleasant temperature, which was great for me, since my body is still adjusting from San Francisco’s chilly summer evenings.

The show was sold out, but I was lucky to snag tickets online for way below face value the day before. The line wrapped around Stubb’s by the time we arrived. While I would have normally waited in line for this show, I took the leisurely approach tonight, grabbing dinner at the soon to close Jaime’s Spanish Village across the street and a drink at my old favorite, Club de Ville. It felt so good to be back in Austin.

Walking into the packed Stubb’s, we grabbed a spot on a bit of an incline so that I could see over the crowd. A mere minutes after arriving, the crowd cheered and I could see those golden locks emerge on the stage. 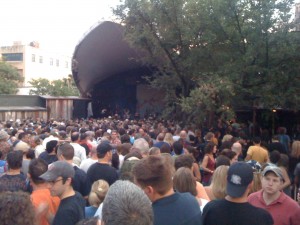 As they launched into the first song, and Plant lifted the mic stand sideways and tossed his hair, I thought it fortunate that I could not see every detail of his aging frame. So for the rest of the show, I projected 1969 era Plant onto that stage.

Band of Joy, which was the name of Plant’s pre-Zeppelin band with Bonham, has an album due out this Fall. So while the first song played- an unfamiliar track presumably from the album- I looked around at the crowd. Mostly middle aged couples surrounded me, out for a rare date night to see a musician that impacted their youth. While the Americana music fit the profile of the crowd, you could almost hear the collective willing of them for a Zeppelin song as he launched into song two. I experienced this same feeling when I saw him and Allison Krauss perform at Golden Gate Park a couple years ago.
The Band of Joy material definitely appeals to the same audience who are fans of his work with Krauss. While I don’t mind it, I will fully admit that I was there to hear the few Zeppelin songs that would make it into the setlist.

Cover songs peppered the set, and first were ‘Angel Dance’ (Los Lobos) and ‘House of Cards’ (Richard Thompson). And then, Plant mentioned pulling out songs from the past 40 years, and it took a second to recognize ‘Misty Mountain Hop’, which had been heavily folk-ized. I was not a fan of this version of the song; it lost it’s bite, and felt like it never took off. I kept telling myself that this was an age appropriate version, both for him and perhaps the audience, and let my brain fill in the gaps.

The sun was setting on the summer day. I was handed a giant Foster’s can of beer to drink, which was so comical I couldn’t stop thinking about it through the next song. I literally had to drink it with two hands like a sippy cup.

And then I heard it. The first two strums of the guitar for ‘Tangerine’.

There aren’t many people in this world that I’ve met that understand the place I go to when I hear the perfect song live. I’m just wired differently. There’s something chemically that becomes altered in me, I can feel it. Perhaps it’s a feeling of ownership of the moment; that I’m hearing the song I most wanted to hear, that somehow made it onto the setlist for that particular evening. Misty-eyed, I listened intently, hanging on every note. ‘Tangerine’ tells so much in so few words. In that moment, all was right in my world. And this was made even better because I was holding the hand of someone I care for the entire time.

Measuring a summer’s day,
I only find it slips away to grey,
The hours, they bring me pain.

Tangerine, Tangerine,
Living reflections from a dream;
I was her love, she was my queen,
And now a thousand years between.

Thinking how it used to be,
Does she still remember times like these?
To think of us again?
And I do.

(From the Houston show)

I could have left then and been happy. ‘Houses of the Holy’ was given a heavy country bent. ‘Gallows Pole’ became very folksy. Surprisingly one of the songs that most channeled a Zeppelin vibe was the somewhat bizarrely chosen cover of Low’s ‘Monkey’. A cover of Townes Van Zandt’s ‘Harms Swift Way’ fit nicely with the vibe of the other songs.

(From the Tulsa show)

For the encore, the back to back dose of ‘Thank You’ and ‘Rock and Roll’ could best be described as teases. Nearing the end, Plant unleashed the upper register of his voice at moments, making us ache for times past. The set closed with ‘And We Bid You Goodnight’.

(From a different show)

As we filed out of the venue, I couldn’t stop thinking about how seeing this set actually just made me lament the fact that I never got to see Zeppelin live. I wish I could have felt the energy in the room when they played, to let the notes seep into my skin and look at them with love in my eyes.

The next day, as I drove back through my small town and out to my parent’s house, I started getting that sinking feeling in the pit of my stomach. Dread. The previous night’s affairs had distracted me from the reality that is my life, but here I was to face it again. It’s a feeling that makes me afraid to experience the good, because it makes coming back to the bad so much worse.

The hours, they bring me pain.