schism (skzm, sz-)
n.
1. A separation or division into factions.

As I watched my couch- the last piece of furniture to go on Craigslist- leave my apartment this morning, I thought about what home means.

I also thought about all the things that happened on that couch. Some of my best work was written while sitting on it.

Tonight would be my final show in SF before moving back to Texas. And I couldn’t have chosen a better send off than Tool. 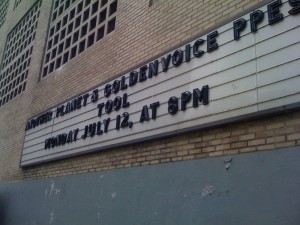 I can remember listening to Undertow in 1994 and and thinking it was scary. We used to love listening to it in the car on our traditional roadtrips on the backroads of small town Texas late at night. Inevitably we would forget the end of the album, only to be scared when ’69’ would come on. In fact we created this whole mythology around ’69’, including a stop on one of the backroads that we named after the song where someone in my friend group swore there were once animal sacrifices. One time we told everyone to meet out there for a party….and this was purely done word of mouth day of- before cell phones!

Since I’m now unemployed, I was able to go early and wait in line with my NIN friend Flower. She got there around 1p, and I arrived around 3…which is nothing compared to the time we’ve spent waiting in NIN lines. We were about 30 people back, which seemed like we would probably get rail no problem. It was fun to do the line thing again, that shared experience and excitement is something special. 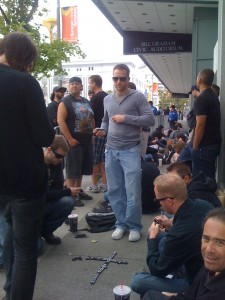 But you never know; so as time neared we went through the usual nervous jitters. We each went to a different security line, and I chose poorly…but Flower got in and we ended up with an awesome spot on the left side of the stage.

Before long we were treated to nearly a full set from Jello Biafra and the Guantanamo School of Medicine. It was a perfect final opener for me….I watched so many shows where Jello was either in the crowd with me, or a special guest, or have seen him perform during my time here. The crowd was a bit mixed on his music and politics, though.

There is really no way to describe the feeling I get when I am merely minutes away from seeing a great band from a great spot. I’m not a fan of this venue, but when you’re close, the venue doesn’t usually matter. Tool had a photo policy like Danzig’s a few weeks ago– no phones were even allowed to be visible. But at least I know great pictures are incoming from Ray, who I was able to say goodbye to from the rail, just like it should be. 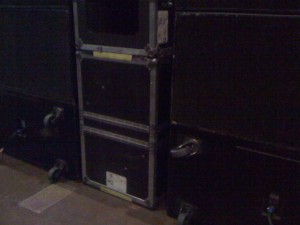 When the band came on stage, I was dazzled by being so close to Adam Jones and that we had an unobstructed view of Maynard. The visuals, the volume- it all wrapped me up into the experience. And then there was the crowd, crushing me from behind. I tried to take it like a big squeeze goodbye, but that quickly turned into an uncomfortable mess. I know from prior rail experiences that you just need to ride it out for the first few songs…but this was pretty unrelenting. I should have know considering the female to male ratio was very off balance. At one point, I thought I might fold in half vertically…not the best feeling. 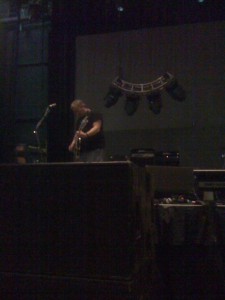 But damn was it worth it. The visuals alone are worth the price of admission….which is part of why I respect Jones so much, since he creates a lot of them. And I will never talk shit about Bill Graham Civic again; the sound was perfect. Militant Maynard was maniacally moving to the music, swigging from a bottle of his own wine (Sensei? That’s the good stuff). And Danny Carey peering out from behind that huge kit….I was able to watch his precise timing and sense the strong jazz influence. Occasionally I could peek over at Justin Chancellor, generally when he was perfectly lit up by lights on the floor, crouched down fiddling with something; making me want to grab my phone and take a picture.

I didn’t quite get the whole religious experience feeling last time I saw Tool, but this time I did. It was mostly a function of where I was both physically and mentally, but I think it was also because I further understood a notion about watching the band perform that only caught me off guard last time. There is a certain efficiency of motion in each member’s performance, an effortlessness that seems almost unreal. And then there are the drugs, and the crowd partakes in lots of them, making the pit into a sea of crazy eyed fanatics. The music and the visuals definitely evoke that type of experience…with the glowing eyes of the faces pulsating to the music, and the screens moving ever so slightly to make you question what you saw.

You also question what you hear sometimes. Each song takes on a life of its own. Even though I would say I’m pretty familiar with Tool, I would get lost in the music. But that’s the best thing; that’s how you know it is live.

The setlist was fantastic. With extended solos and a teaser of another song or two, Maynard even turned his megaphone to the crowd at one point for people to sing along. The short drum solo was followed by a funny keyboard solo by Maynard.

Standing there at the rail, with the guitar tones washing over me and Maynard’s voice meandering into my ears, I thought about that notion of home again. They say home is where the heart is, and my heart is with the music….at shows like this. And even though I will not have a home of my own anymore in the next 24 hours, I can always go to a show and feel in my element again.

After the show, the floor had some hair and blood on it. That’s when you know it was good. 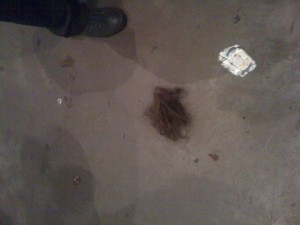 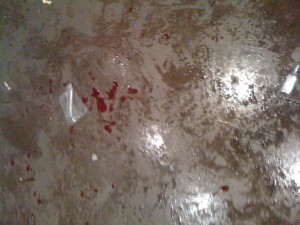 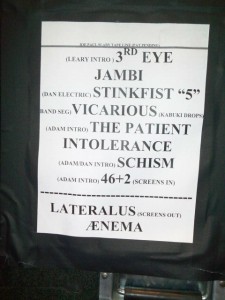 So there you have it. My final piece for HRC before moving into the ‘beyond’ part of my bio line ‘…chronicles her musical adventures in San Francisco and beyond.’ I’ve truly enjoyed being a tiny blip in the SF music scene these past three and a half years, and look forward to new adventures in Texas at some point in the future.