‘Among the Living’, Anthrax

When I was eleven, I played the violin, rode horses, and went to ballet and jazz classes multiple times a week.  I was an honors student.  I lived in Houston and was an only child.  I spent a lot of time alone listening to the radio and sneaking MTV.

We got our first CD player and I was taken to Sound Warehouse to buy some CDs.  I got The Beatles Sgt. Pepper’s Lonely Heart’s Club Band, a Bach comp, Guns N’ Roses Use Your Illusion I, and Metallica’s “Black Album”.

And that was the beginning of the making of a metalhead; a DSM-worthy affliction where you chase heavier, faster, darker music until you hit a certain age, and then everything in the genre one day instantly sucks, has been done before, and you have seen it all, heard it all, and are loathe to hear it again.

Any metalhead will tell you that it’s not just the music, it’s a lifestyle. You’ve got to buy the merch- and it better be the right merch- no knock off, reissued bullshit!  And you’ve got to collect a lifetime of live music experiences.  My first metal concert was seeing Ozzy Osbourne, Type O Negative, and Sepultura at Southpark Meadows in Austin, TX in 1996.  I was 16! A couple months later, I would see Pantera, White Zombie, and EyeHateGod. And I was hooked.

As I’ve gotten older, I’ve spent a lot of time reflecting on the sacred little things of yore that peppered my music memories… especially the things that will never, ever exist again.  Inconsequential, un-iconic venues to no one but the people who lived in the area at the time will remember, like the Backroom in Austin or the White Rabbit in San Antonio.  The importance city weeklies had for show planning.  CD long boxes.  Street teams.  Actual tickets… With age these dusty little memories become like warm blankets even though they were once illustrious badges of self-identity and dangerous acts of rebellion…

I was standing outside the Brooklyn Bowl in Las Vegas and it was drizzling and I was not in the best of moods.  The security lady pulled some shit… and if you are a frequent reader of this site you will know that I don’t do well with this ever so it doesn’t go well.  I mean really, we can’t waltz in with an expensive Great Frog wallet chain while everyone else sidles by with cheap chains listlessly dangling like fool’s gold uninterrupted while you scold us?! BULLSHIT! Anyway, we go around the corner, hide it, flip her off after we walk in, and proceed with our night.

We missed Hatebreed because- get this- a stranded train blocked our route from Joshua Tree to Las Vegas.  What is this, the old west? Maybe. We had to backtrack to a different, unfamiliar way in, which made us late.  We decided to stay at the nearby Linq which was also a giant fucking mistake- there’s NO VALET, NO ONE to check you in to your room which is a super bad sign these days, and most of the elevators were dysfunctional.  There was no time to eat.  Whine whine whine whine wine wine wine can we get on with the show already?

That girl that bought those GNR and Metallica CDs always knew she wanted to be involved in music… but not in a band. I wanted to be an MTV VJ. Well, I missed that boat, but when the internet happened I just made my own path and by 2009 I was documenting concerts and interviewing bands all on my own!  In fact 2009 was the first time I saw Black Label Society play The Fillmore in San Francisco, and I was quickly obsessed with how many $185 vests were walking around the room. So well merchandised! I can’t turn my business brain off to rock sometimes.  To my dismay there were 0 vests at this concert but it was hot as Hades.  I have now seen BLS play like a hundred times and interviewed Mr. Zakk Wylde a few times on different carpet occasions, but it had been ages since my last show.

BLS took the stage and launched into “Funeral Bell” – one of my faves.  The crowd started grooving, as Wylde perched above them, flanked by the longstanding JD DeServio and newcomers (to me!) Dario Lorina and Jeff Fabb.  Now officially a battle-worn veteran, I stood at the back while the kids scrapped in the pit and the adventurous ones jockey for rank up at the very front.  I’m just in such a different place these days it’s wylde.  I used to have to be right there up front so I didn’t miss a hair flying from the fan pointed at Wylde’s head to write about, to feel, to everything.  We’re at “You Made Me Want To Live”.  Now I’m just fine to even be there.  Honestly (AF) I was kinda looking around to see if Wylde’s wife was present because I’m a big fan of her podcast.  The backline was stacked with Wylde Audio equipment… because…  why not? Every guitar god needs their own line.  I used to always play around with Wylde’s signature guitars in the Gibson room at NAMM but this is a whole other level.  Yes I know all about guitars now because my husband plays them and we have them allllll over the house.  Funny how that happens? OK we’re onto “In This River”… a couple days before this show it was announced that a Pantera reunion of sorts would happened with two people playing at this evening’s show filling in the empty seats.  As a huge Pantera fan, I am thrilled!  I’ve already bought the ticket in my mind. Now there have been all sorts of walkbacks since this announcement but I remain optimistic.  Finishing up with “Suicide Messiah” into “Stillborn” was a strong ending.  I love BLS and being in an audience at their show again felt like the world was really getting back to normal.  Well, at least the rockers kind of normal, anyway. 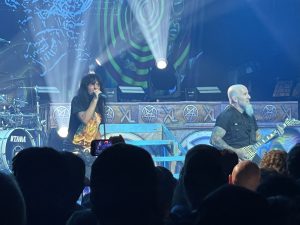 It is Anthrax‘s 40th birthday party tour!  The set kicked off with a fun rockstar-filled video where everyone spoke about how important Anthrax is… as if you need to whip this crowd up into more of a froth!  When the curtain lifted, the roof might as well come with it.  Oddly enough this was my first time seeing a full Anthrax set… if we’re gonna talk Big Four- I’m a Metallica and Slayer gal, my other half is a Megadeth and Anthrax dude. Peas and Carrots? Anyway, “Among the Living” rattled my bones.  The stage setup was cool, it felt like a big show in a relatively small space… ramps and set pieces.  And so much energy! They’ve been a band for 40 years and I’m exhausted!  “Caught in a Mosh” always tempts me to get in the pit but instead the pit came for me; also- I know better and was running on fumes at this point.  “Antisocial”… now here’s a song I can get behind… everyone’s screaming along however I am sort of going into deep thought about this alternate reality where I didn’t quit my site for 5 years.  But pre-influencer times were gnarly for a female rock and metal brand like mine on the internet.  It was hard to take the vitriol.  “I Am the Law” is a personal favorite; comics and metal are like peanut butter & chocolate, yeah?  And it’s where Belladonna really Belladonnas IMO.  I heard somewhere (isn’t that just the ultimate series of words to make you tune out… anyway, here goes) that the nineties was ‘Peak Humanity’ and I don’t disagree which brings me to “Bring The Noise”; a groundbreaking track that is just one more reason the decade was such an interesting and iconic one for music.  I heard LA actually got Chuck D but WHATEVER, I don’t miss that arms folded, let-me-take-my-insta-shot-and-bounce industry-laden boring ass crowd for anything.  Back for an encore with “Indians”, the typical closer but just my unsolicited feedback I think it’s odd, but WTF do I know.

Merch line time and as a poster collector I wanted a signed poster.  Guess what, they ran out right before my turn.  So we said- give us the one on the board!  “You don’t want that one, it’s all fucked up”.  Nope, we’ll take it.  Finally we convinced the guy to sell it but seriously I have the worst luck with this.

THEN! We try to find a sit down place to eat and NOTHING is open.  Vegas is no longer a 24hr city?! So we go back to the venue to In-N-Out Burger.  As I’m waiting for food, clutching the poster, looking like a starving, drenched, alcoholic, this massive person says, “hey! you want me to sign your poster?”. I glare. And they add “…Bassist for Hatebreed…” And I add “Haha NOOOOO!!” all sarcastically because I am tired, hungry, pissed off, and think this person is joking and more importantly THIS IS NOT A HATEBREED POSTER!

The next day I see that a blue checkmark account liked a photo of mine and realize that was actually the bassist of Hatebreed being kind.  Sorry! I am a bitch when I am hungry.