dev@hard
April 15, 2022
5
0
Share Blog on
“It’s early morning, the sun comes out
Last night was shaking and pretty loud
My cat is purring, it scratches my skin
So what is wrong with another sin?
The bitch is hungry, she needs to tell
So give her inches and feed her well
More days to come, new places to go
I’ve got to leave, it’s time for a show”
“Rock You Like A Hurricane”, Scorpions
This is the year of seeing a bunch of bands that somehow I have missed for whatever reason… and as someone who used to attend at least 100 shows a year for about 10 years, I really don’t know how this happened with some of these bands forthcoming, but… better late than never!
I saw an ad somewhere for this Scorpions and Skid Row residency, and I thought this was a perfect contender!  Though I had seen Sebastian Bach hanging out around the Strip when I was a staple there enough times that it became unexciting, I had never seen Skid Row.  Well, cue the week before the show when husband says “babe, you know Sebastian Bach isn’t even in the band anymore?”  “WHAT?!”  I used to know everything and now I know nothing… about some things at least.
I had also celebrated my birthday the month before and got a stick and poke scorpion tattoo just like that Scorpions album cover.  I would not even categorize myself anywhere near a massive Scorpions fan but I thought it looked cool and I was in the mood to get it.  Let me tell you, I have a lot of tattoos at this point but this was my first stick and poke and it hurt like a BITCH! 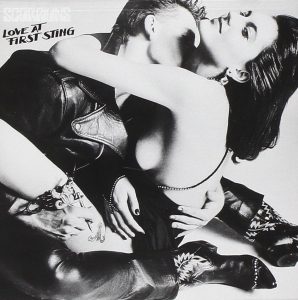 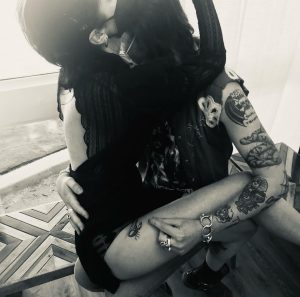 So three weeks after seeing Judas Priest we found ourselves on the barren, winding road driving through the burnt Joshua Tree forest to Vegas again on a Sunday.  It’s starting to get hot out. Vegas has always been a somewhat desperate city, but as we indignantly squat in this “Post Covid” era, Vegas reeks of desperation like never before.  It also suffers from shortages more and more every time I go there…. it was entirely self check in this time, nice restaurants were shorthanded; Vegas used to be about spoiling yourself no matter how you defined that, no matter what socio-economic level you were at; now it’s struggling so much it’s almost like Atlantic City.
Back nestled in at Zappos, Skid Row trekked around the stage, complete with catwalk.  Clearly Skid Row are a band I know nothing about but you could easily tell which ones were original members and which were not.  A quick Google tells me they are now fronted by a winner of Swedish Idol- and he was really good!  The audience skewed old for this show, so they were mostly sitting even though this sign told them not to: 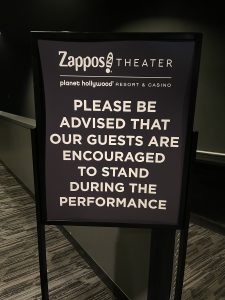 I’m currently listening to Nöthin’ But a Good Time because I am for some reason just super into that era of music right now.  There are some bands that I have always been into (Mötley Crüe, Van Halen) but for some reason I am just binging that era.  Maybe because I am watching a lot of bad reality TV (Rock of Love- all of them!) and I loved Pam and Tommy…. but I also think there’s something socio-political about it.  Like I was always interested in the gender bending, ‘poodle’ rock of the Sunset Strip, nestled into its misogynistic ways.  Plus I always wanted to be a video vixen!  But on a more serious note, history happens in cycles, and I think my mind is trying to grasp at making sense of what the fuck is going on by teleporting to another area of Russian conflict, inflation, and gender fluidity- the Eighties.
People had come from all over the world for Scorpions – I met two from Canada and Italy.  Lots of superfine in attendance, and you could tell many of them had dragged along their wives.  Scorpions, to me, belongs to my elders…. haunted me on late night commercials for Monster Ballads, yeah you remember it:

Let me tell you, if you want to listen to a lot of bad, off key crowd singing… go see Scorpions!  Seriously though, it was a fun show, but the highlight for me was really probably seeing Mikkey Dee drum again.  They dedicated “Winds of Change” to the Ukrainian people, as they should- because this song has a storied political history– though it may not be the one you’d expect.  Often associated with the fall of the Berlin Wall because they are German, it was specifically written after performing at the Moscow Music Peace Festival… which also featured Skid Row!  This was the first time Western heavy metal acts were allowed to play there.  You can watch the most of the festival here!

I was far on the side for this show, so I couldn’t see all of the cool effects going on the back screens.  But everyone I told about this show asked the same two things: “Does Klaus still wear the hat and throw the tambourines?”  Yes and yes.  I always find these trademark DNA of a live show interesting; apparently he used to throw the tambourines into the crowd, but now they are specifically thrown into what I would call a Designated Tambourine Zone Area.  Times are tough, man- we need to recycle them!

So this was definitely one of those shows where I definitely felt like I was watching it and never became a part of it; that said, those can be fun to in that I could see a bunch of people teleported to other decades, enjoying the lighter side of heavy metal.  I’ve always felt like Scorpions occupies an interesting space in the heavy metal genre; beloved by all, but so unique in tone and mood.  Guitar-forward, vocal-positive…. their anthemic songs were built to be fodder for soundtracks.  And on this night, watching these guys slang their axes down this catwalk, amidst this semi-circled, graying crowd hanging on every hymn- I was witnessing this feel-good frenzy that I just couldn’t quite partake in.

Perhaps it was because in an odd coincidence the GRAMMYs were taking place next door, and my storied history with the event made me really feel the passage of time… not unlike everyone at the concert.  So afterward we continued the party at Spearmint Rhino late into the night, as any good rocker should, where I had deep conversations about Euphoria and Nihilism with strippers while they waited to see if Drake showed up.  He didn’t.