In my first post on HardRockChick.com, I told the story about how ‘I Love Rock ‘n’ Roll’ was the first song I remember hearing. Here we are three years later, and I just finished reading a copy of Joan Jett, which was sent to me for review.

Despite this important memory, I was never a huge Joan Jett fan, meaning that I never really dug below the surface. I know all the songs, and I appreciate her image, but it was all at face value. But after reading this book, I’m kind of baffled as to why. 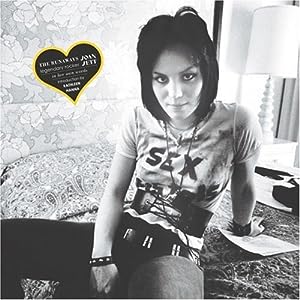 First of all, the book was made for someone exactly like me. It’s not super in depth- I finished it in about three hours- but it gives you enough to really appreciate who Joan Jett is and all that she has accomplished. It’s a very pretty book- there are tons of pictures, and the text is well spaced out amongst them.

That said, it did feel a little scattered at times. In the grand scheme of things, it’s a chronological life story, but there are some parts that felt out of order. The same goes for the placement of the images. The writing is simple and straightforward, which kind of bugged me at first, but then felt fitting for Joan’s voice once I got into it.

The story is of a self-made musician and accidental trailblazer. It’s about a person who understands that it’s always about the music, and to never forget your fans. My favorite part was in Chapter 12: ‘I Live For This’, where she talks about how comprehensively she toured the states, and what it means to play for her fans. This chapter gave me goosebumps; she gets it. Sometimes I feel like 99% of bands out there don’t understand what a fan like me feels when they stand in a crowd. Joan Jett is in that 1%.

The important thing is that when you finish reading this book, you’re in awe of this person. And that’s not because it’s a slick Hollywood version of her story, but because of the things she’s accomplished told in a matter of fact way in her voice.

Buy this book on Amazon

“Rock ‘n’ roll is an attitude, it’s not a musical form of a strict sort. It’s a way of doing…

Humble beginnings. Family hardships. The kid that got picked on in class. Doubts. Music as a savior. Amazing luck. Front…

I received this headscratcher of a press release…really really bad. Just awful. This is not a promotion of these books-…

It was nice to read that Acrassicauda, the band featured in the documentary Heavy Metal in Baghdad, is living their…

Wow, what an interesting story. Asher Roth, who has been named one of MTV’s MCs to Watch in 2009, will…

NYT Article: Songs From the Heart of a Marketing Plan

The New York Times recently featured an article discussing music licensing, and its potential effects on the creative process of…

This is messed up on so many levels. Is this seriously some laid off music exec’s job- to pick out…

from blabbermouth: Several rock and metal musicians were quick to hail Barack Obama’s election victory as a boost for the…

To blog or not to blog

I’m getting mixed messages. Wired is telling me that blogging is so 2004, that I should live twitter my reviews,…