Once upon a time, back in 2006, I was in the midst of a live music binge that would end up being the precipitating factor in starting this site. I think I went to 5 shows in a week, a bizarre mix of Bob Dylan, a Bridge School Benefit, She Wants Revenge, and Snoop Dogg. Back in those days, I had a boyfriend, and I would drag him to these shows. In return, he would drag me to his occasional show. From this, I learned that I will never ever ever date anyone with such different musical tastes; seeing Jack Johnson so many times in our 5 years was damaging.

Anyway, one of those shows during that binge was Gomez, and opening for them was Rodrigo y Gabriela. I remember being very impressed, and that after their set it was all downhill with Gomez. I had not seen them since, but knew that they’d become very popular, to the point of selling out Stubb’s this past Friday. 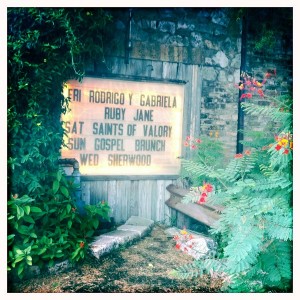 My concert buddy Mel happened to be visiting me for this show, and I was excited to take her to one of Austin’s most unique venues. We ate BBQ before, admittedly at Ironworks and not at Stubb’s (too crowded), before making our way into the crowd in search of a good spot to perch.

The previous evening we had been to the Austin Machete premier, so between that and this we were getting our Latin culture lesson. After what seemed like a long time to set up two guitars, the duo emerged on stage to an excitable crowd.

When you first see Rodrigo y Gabriela play, you tend to do two things: 1) look for a drummer hiding in the back and 2) become hypnotized by how fast their hands move. Their precision and speed, as well as the dynamic between the two and the rawness of their sound leave the audience mesmerized. There’s nothing to hide behind here- yet this isn’t a folk guitar jam band performance. Gabriela is often bouncing around like a rabbit, and Rodrigo moves around the stage as if dancing with the guitar. The two seem to almost be wind up toys in their movements.

Personally, I have trouble with instrumental sets- after the initial ‘wow these two are talented’ thing wears off, my mind starts to wander. But I come back into focus with their cover of ‘Orion’, which was introduced by Gabriela stating their admiration for Metallica.

My ears perked up again when Rodrigo played ‘Master of Puppets’ into ‘South of Heaven’ followed by Zeppelin’s ‘Stairway to Heaven’, which made me think of my last show here: Robert Plant.

Two drunken guys in front of us had been balancing their drinks on a rafter above us, and then would inexplicable hang their hands up on the rafter causing drinks to fall off onto unsuspecting bystanders’ heads more than once. I don’t think I’ll ever stand in this area again. We also had someone pass out flat on the ground next to us- it’s always interesting to watch what the crowd will do when this happens. There were way more drunk people at this show than at my typical metal show….or perhaps metalheads just handle their alcohol better. 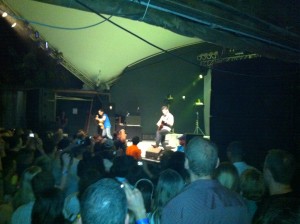 Towards the end of the set, I overheard someone say, “this makes me want to pick up the guitar- but I know I’d never be this good’. This brought the entire set into perspective for me. There aren’t two people on stage playing classical pieces that were written ages ago. They are relevant and fresh, using an old method of delivery to present pieces inspired by new classics: Metallica, Zeppelin, Pink Floyd, Hendrix, Pantera. They are also presenting their metal tinged guitar work to an audience that would probably not normally listen to those kinds of bands. Therefore, Rodrigo y Gabriela have carved out a unique space in the music world; something that’s so difficult to do these days. And even if I got bored at times, I appreciate their artistry.

As they closed with ‘Buster Voodoo’, I thought about Jimi Hendrix in relation to this duo, and how many different types of Guitar Gods there are.