The first time I had even heard of Porcupine Tree was almost exactly one year ago. It was the final Nine Inch Nails show, and because I went straight from the airport to waiting in line, a guy near me let me put my things in his car. While getting my things after the show, we were discussing what was next for us, and he mentioned the next tour he was following was Porcupine Tree. Generally there is a lot of common territory in terms of bands that NIN fans are into, but this was new to me. So when the opportunity presented itself to check out the band, I jumped on it.

I had also never been to, or even heard of, the venue Sunset Station. Apparently it’s been there a long time. As you walk up, you pass a historic train and walk through a historic part of downtown that looks like the nicer parts of Mexico. And then as you walk up to the venue, it appears you can hear- and see- the entire show from outside the gates. Tucked into the shadow of the Alamodome, the venue is a giant carport of sorts, with a surprising amount of tiers and nooks and crannys to watch the show from. 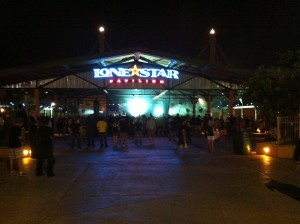 I immediately noticed that the crowd was quite different from Sunday’s metal show. But while the crowd may have been smaller and skewed either much younger (C&C fans) or older (PT fans), you could sense the cultish dedication.

Whenever a press release uses the terminology ‘unclassifiable’ I become immediately skeptical. But after experiencing the set, I’d have to say that I agree. In the same vein as NIN, Opeth, and Pink Floyd, there are elements to Porcupine Tree’s music that make them a truly unique band. The vocals are in a mellower rock style, the guitar- sometimes psychedelic, sometimes metal, the drums- anywhere from jazz rhythms to blast beats. At times they had me in the palms of their hands, at others I was thinking about my to do list.

The band came out to wild applause. After playing their first song to an impressive projection with perfectly choreographed, almost too literal imagery, a few songs went without until it was picked back up again at the end. Immediately I started tripping out on 2 older guys in from of me, who were having the time of their lives. One was filming- and the film WILL come out horribly because he was banging his head the whole time singing along. The other was singing back up parts and holding the drinks, placing his friend’s straw in front of his mouth so he could take a sip at times while he filmed. Another guy jumped up and down and sang along the entire time. I always trip out watching people geek out on seeing their favorite band…it reminds me of the feeling I get when I see mine….and it’s been a while since that has happened and I’m starting to forget. 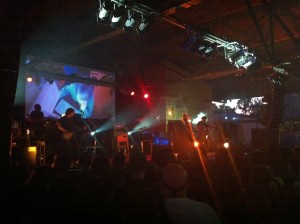 “Gracias”, singer/guitarist Steven Wilson would say between songs. “We’re not used to this weather….we’re from London, where we get one week of sunlight a year”. The crowd was silent, as if baffled by the idea. Wilson- despite his meekish John Lennon meets Evan Dando exterior- was as believable pulling off big riffs as sitting down at the piano. When the visuals came back for the end of the set, I drew comparisons to Tool as we were shown stop motion i-Robot figures. Then an emo girl with an iPod on the train tracks took me somewhere else, as did the showers of colorful pills. 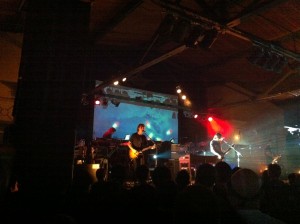 Porcupine Tree appears to be one of those bands with a small but very hardcore fanbase, but is a bit perplexing for outsiders to get into. As the set ended, a certain demographic left.

And I was not far behind them. I was pretty sure I wouldn’t like Coheed and Cambria- though I know some people are crazy about them- but as soon as that lead singer’s shrill voice emerged from that mop of hair and the girls shrilly screamed back…I was done. There are just some voices that don’t agree with my ears. 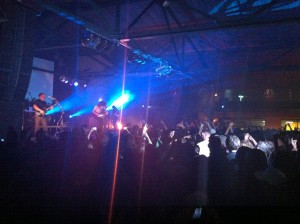