There have been many times in this space where I have lamented the fact that my life is a rollercoaster; a series of highs and lows with little in between.

The highs and lows in my life go beyond good times/bad times…but can also describe the sort of multiple personalities I have. I can start my day at a luxury hotel in WeHo and end it in mud boots feeding chickens in the middle of nowhere.

2011 is the year where I learn to embrace that.

It started when the year did, celebrating NYE in Marfa, TX, drinking Veuve and narrowly escaping what we discovered are the real Marfa lights…the ones attached to a cop car. Of all things, name dropping daddy’s business kept me out of trouble. Then, a close friend and I embarked on a spontaneous journey dubbed the ‘hillbilly roadtrip’. Like me, he splits time between Austin and LA, and before we both left for our ‘glamorous’ LA lives in the coming week, we found ourselves roaming around places we went as kids and buying a membership to a bar so that we could drink in the dry county that Uvalde resides in.

It’s great to be in touch with your roots and then to pull as far away from them as possible. I’m finally realizing that, while my life may be less than typical….completely erratic, in fact….I’m finally, at 30 years old, comfortable in my own skin.

My first show of the year would be no exception to this high/low theme. The evening began with a nice bottle of wine and cheese with The Booker, after which we made our way in the rain over to Red 7. It was ‘Free Week’, and tonight the indoor stage was to be graced with the presence of Brent Hinds of Mastodon fame in not one, but two bands.

For those unaware, I’ve lost track of how many times I’ve seen Mastodon over the last few years (I lie – it’s 8). They are one of my favorite bands. I was excited to see Brent in a tiny venue, and to see what he would be like outside of the scope of Mastodon. I resisted familiarizing myself with either side project in favor of my preferred method of in person initiation.

When I entered the venue, I could sense a strange vibe. It was a bit later than I had anticipated arriving- the conversation and the wine were too good- but I had the distinct feeling that I had missed something. At first I just chalked it up to the weather and the usual high level of intoxication at this place. I walked over and perched myself by the Skee-Ball machine…which was being used as a load in ramp for the band. 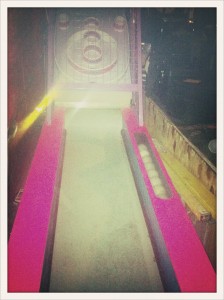 It should have been the time slot for West End Motel (BH side project #1), but instead Fiend Without A Face (side project #2) took to the stage. The four members were wearing Shriner’s hats and black hose covered their faces. I could tell one was Brent by the tattoos and familiar looking guitar. He also most definitely shared DNA with a guy in the front row….the Hinds profile is as distinctive as the Barrymore one. The set begins with Hinds apologizing for ‘touching that guy’s drums’. The phrase, “I’d like to apologize for touching that guy’s drums’ would be uttered by him at least 20 more times throughout the ‘set’. I thought this was part of ‘the act’, but I would later discover that- by Hinds’ request- the order of bands was changed as to accommodate his drinking agenda- and this somehow resulted in him going on stage while one of the openers played and having some sort of physical interaction with the drummer’s kit. As the band continued to play between his sarcastic apologies, I couldn’t help but think that this whole thing has to be a joke. It didn’t sound like real music to me…as I listen to their MySpace, I can’t recall hearing any of these songs. I had just settled on the notion that this must be performance art when the set abruptly ended, and the drummer stormed off, as did Hinds. Second or third hand hearsay is that Hinds quit the band, then and there. 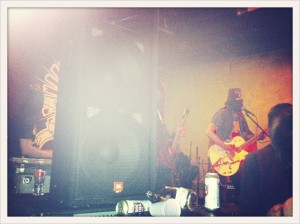 I can’t say that, after following Hinds’ career, and seeing him explode at people both on and off stage, that this surprises me….but I was a little disappointed.

Luckily, I was treated to a set outdoors that I didn’t intend on seeing. I braved the increasingly inclement weather to watch The Roller play the outdoor stage. Despite their seemingly excessive setup time and too long pauses between songs to drink and fiddle with their equipment, The Roller gave me a serving of Doom Metal that I’d been missing for quite a while, with a twist of black metal to boot. Similar to EyeHateGod, there are times when their music slows down so much that you think the song may have ended. It was heavy and grating, and fit the weather perfectly. 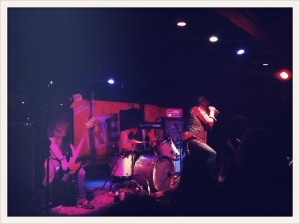 Out of the 2690 songs on my iPod, ‘Iron Tusk’ shuffled on as I started the long drive back to The Compound.

The hot rod had to double as a boat to get me home. Do you have to worry about being able to make it over a low water crossing to get to your house when it rains? Didn’t think so.

HRC’s first show of the year wasn’t the best. So I’m looking forward to the next one, even though I’m not exactly sure what it’s going to be yet. The past is history, the future is a mystery….onto the next high I go.