When my alarm went off at 4:30am, I would have never imagined what the next 24 hours would hold for me.

Soon I found myself in a cab on the way to the Austin airport to catch the now familiar too early flight that’s direct and gets me to LA early enough to enjoy a full day. The cabbie is blasting some old school hip hop which he swiftly turns down as I slide into the backseat. I ask him to turn it back up. “Are you sure?” Yes, I say. It’s 5:45am.

After being whisked through the VIP security after a fortuitous run in with a friend who has enough miles to be able to do that, I’m sitting on my flight thinking about what this weekend will be like. I literally have no solid plans. It used to be that, for me to get on a plane somewhere, I had to have an eloquently planned schedule with everything double confirmed. In 2011, my outlook has changed. I’m learning to go with the flow, to see what comes to me. And so far, it is working splendidly.

The main purpose of this trip was to go to NAMM. It was a goal I set for myself last year, but despite having at least a dozen industry friends looking for a badge for me, it proved to be difficult. But I booked the trip a couple weeks out thinking that I’d at least hang out at some of the auxiliary events if I didn’t get a badge. Then, about a week before the trip, a badge magically appeared in my inbox.

I stepped off the plane in LA and immediately started shedding clothing. It was in the 20s in Texas. Here it was sunny and nearly 80 degrees.

The day before I left, a friend tipped me off to the premier of the Lemmy documentary. I’ve been wanting to see it for at least a year. But I couldn’t see any place online where you could buy tickets. So I hopped in The Challenger and called my hotel to confirm my early check in. No room was ready yet, so I decided to head over to the Vista theater where the premier would be happening to check it out. No one was there, no one answered the phoneâ€¦so I started to realize it’s an invite only affair. I called about my room againâ€¦.still not ready. I decided to waste some time walking around Melrose. Bad idea. Finally I get a call that my room was ready. Come to find out, because of the wait, I was upgraded to a suite. There was something very rock n roll about this to meâ€¦.it was a lovely suiteâ€¦.but it did feel kinda weird for little me to have that giant of a hotel room. 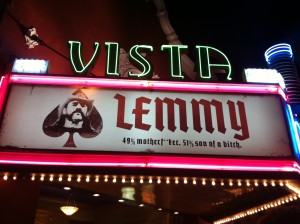 My friend and I decided to try our luck and go to the premier early and then try to sneak in. When we arrived, the sun was setting and a small but significant cast of characters was assembled in front of the theater. A small red carpet lined with press was already interviewing Lemmy. Danny B. Harvey, Robert Trujillo, Steve Vai, and Duff McKagen made their way down the carpet as the press and other rock n roll types watched from the side. I’m starting to think there’s no way we’re getting into this, when someone walks up to us and asks if we’d like to come in and sit front row. We’re a bit surprisedâ€¦it can’t possibly be this easy. But sure enough, a few minutes later we were being handed wristbands, walking inside, and taking a close seat in the theater. We went to buy some refreshments and were in line next to Trujillo.

It’s pretty surreal to be in a theater that only seats a couple hundred people, and be sitting in such famous company. Before the movie even began, we were invited to the afterparty at the Rainbow. The night had just become quite unbelievable.

I had high expectations for this film, and they were absolutely exceeded. From the beginning scene of Lemmy in his apartment making food, to the end where he’s telling the cameras to go away, we were treated to stories and insights about the man, the myth, and the legend. The documentary tells you everything you could learn about him, but somehow Lemmy still manages to emerge with the same mystique that surrounds him pre-film. Well, maybe except for the shorts part.

I think the most important thing about this documentary is that it truly celebrates and highlights the fact that Lemmy represents the very ideal that rock n roll was built on- that sense of a rebellious spirit. It covers what an authentic person Lemmy is, and helps the viewer appreciate that when many of us have been raised during a time when flashiness is celebrated and musicians are often manufactured. The interviews with other musicians were all really solid and well integrated into the film. There is also a good amount of concert footage included.

There were three scenes that stole the film for me. One was when showing off the collections in Lemmy’s house, the filmmakers asked what the most important thing in the room was, and Lemmy said, ‘my son’. Another part was when Lemmy was talking about the one girl he was really in love with, and he stated that for a woman to be attractive, she’s got to be just a little bit of a bitch. And finally, Lemmy driving around in a tank that he owns was a priceless piece of cinematography.

Afterward, we made our way over to the Rainbow. Once inside, I started drinking Jack ‘n Cokes in honor of Lemmy. Let’s just say the night started to get really crazy from there. We were given the ‘ocean view’ booth at the front for dinner, heard some of the MotÃ¶rhead crew’s Lemmy stories, took a photo with Ron Jeremy, and then ended up at Soho House wreaking havoc in the infamous photo boudoir and running into the likes of Don Draper at 1:30am. Lemmy would be proud of the rock ‘n roll spirit we embodied that evening. If only that helped my hangover the next morning….