The red and blue lights are the only kind of lights you don’t want to see this time of year. I pull over. The officer is nice but not nice enough to let me off the hook. I was going 84 in a 70….and I was slowing down. As he writes the ticket, I’m starting to laugh so hard the car is shaking. In the back seat, a bottle of tequila and a container full of Evile gingerbread men and brownies (not special brownies…). In the passenger seat, The Guitarist. Welcome to Texas. 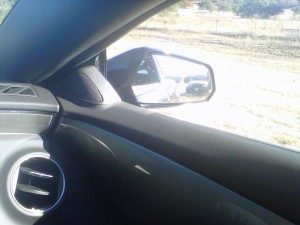 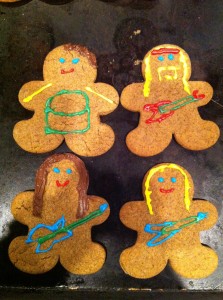 A speeding ticket on the way to a thrash metal show is kinda perfect.

I saw Evile and Bonded By Blood at the beginning of their tour 2 months ago. It’s hard to believe that they’ve been on the road for that long. And here they are again, on their second trek through Texas before they finish out their North American odyssey in a few weeks.

I’m a fly on the wall at Emo’s as the bands soundcheck, set up merch, restring guitars, and meet the press. This is what the merch table had written on it before the t-shirts went on top: 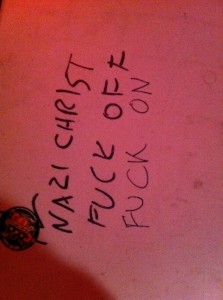 I watched a bit of Austin’s Birth A.D., but their more hardcore leaning metal was not my thing so I returned to the back patio with the English and the Irish. I ventured back inside to catch the end of Bonded By Blood‘s set. Mauro is now fully integrated into the band after taking on vocal duties just before embarking on this tour.

The shrieking vocals of Philly Byrne as Gama Bomb began their set really got me in the mood for the rest of the night. The Irish brought a different attitude with their set. The five of them barely fit on the stage as their frantic motions invaded the crowd and their hair grazed the ceiling. Someone bought them shots, as a welcome to their first show in Texas. Gama Bomb are a fun live band….I mean, come on…who doesn’t want to shout ‘Hammer Slammer’?

The intro to ‘Infected Nation’ stands out amongst the rest of the music of the evening as Evile begins their set. Then it quickly escalates to ludicrous speed. It mellows out again for ‘We Who Are About to Die’…and then after everyone screams “Hail Caesar!”, they’re off speeding again. An Evile set is like a rollercoaster, well-paced speed wise, giving them extra depth. ‘Now, Demolition’, ‘Time No More’, and of course, ‘Thrasher’ continue the ride. When it comes time for their final song, they are told they only have three minutes left, so they decide to speed up ‘Enter the Grave’- a five minute song- to fit with in the final time. What proceeded was pure awesomeness…”feel the adrenaline rush“. And the minor visual interruption would be the hand of the Irish guitarist.

Forbidden are a classic Bay Area Metal band, but I never caught them while living there. I watched about 4 songs. The set just didn’t really gel for me…the music sounded good but the vocals didn’t do it for me. I did notice how the old metal crowd replaced the young kids at this point…the Municipal Waste shirts gave way to Kreator and Hellhammer denim vests. 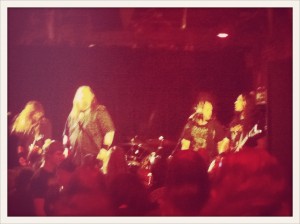 This always makes me realize how my life kind of straddles the old and the new. I was there for a bit of the old stuff, and I’m here for the new as well. I can say “back in the day” a bit as well as “have you heard this new band called ______”. Some people stop listening to new music when they hit my age. I hope that never happens to me. I never want to rule something out because so-and-so did it first ‘back in the day’. There will always be new takes on old things…that’s the cycle of creativity. And I will always continue to look back and learn about old bands that I missed…the sources of inspiration..because it’s always better to do something late than never.

I said goodbye to the Englishmen for the final time in 2010. The next time I see them will probably be on their turf.

And then I drove home….slowly.