As soon as we walked into Red 7, I thought something was…a little wrong.

Come to find out, the Austin School of Rock was performing Beatles hits on the inside stage before the metal show started out back. I looked at the little girl up there helping sing ‘I Wanna Hold Your Hand’ and thought about how one day she could grow up to be the next Grace Perry. This is where it begins.

This was another night of hanging with friends in town before the show. I baked more cookies…because I love to bake but not to eat them. Something tells me my cookies might outshine my writing one day. 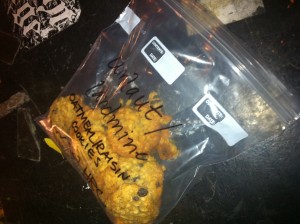 Red 7 is a great space, but for some reason I haven’t made it to a show here since before I moved back, at SXSW. And just like for SXSW, it is freezing out there. Well, freezing to me. At least between the searing hot metal, you can go inside and warm up. I never pretend to be a badass.

After a couple of beers at Casino El Camino with the blogger, the booker, and the bassist, it’s back to Red 7. A local band is finishing up…I can’t remember their name and not much of their set because I was too busy LMFAO-ing at this guy running circles around the floor like a crazy person, videoing. Like that is going to turn out.

Landmine Marathon! We drop everything and rush to the front of the stage. I will always remember my first Landmine show, where I was completely caught off guard. And then there was the last time, at Hoek’s Death Metal pizza during SXSW. Now, Landmine has a new drummer, Andy, as well as more space to work with than I’ve ever seen them with before. It was much easier to watch the whole band work this way, rather than just focusing on Grace like many do. Andy seems to be a phenomenal addition to the band. If I had to sum up Landmine in one word it would be fury. It’s always interesting to watch the crowd go ‘whoa’ and step closer, try to figure it out.

I went to the restroom after the set, and discovered an interesting scene. First, a toothbrush on the floor. Then, blood in the sink. Now, either a kid from the School of Rock just lost a tooth, or someone got it in the face during the set outside. It will remain a mystery. 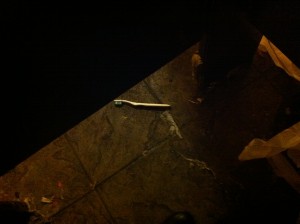 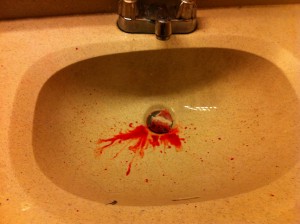 After warming up a bit, I caught the end of Withered‘s set. Wow, was it intense. It’s interesting how their set could be intense in a completely different way from Landmine’s. Occasionally I watch a set and the best way I could describe it was already done within this old classic ad. My ears went ‘ouch’ and ‘ooohhh’ at the same time. They also keep the stage very dimly lit, so all you can really focus on is the sound.

Trap Them are a band I think I’ve heard about for ages but have never seen. Maybe in the midst of a different line up I would have enjoyed them more…but after Withered it seemed to be taking a step back. 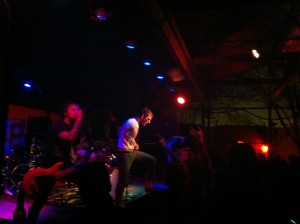 I could almost say the same about Skeletonwitch. They’re like…party black metal. They definitely don’t take themselves too seriously. I love lead singer Chance’s antics, but I really really love the symmetry of the guitarist and bassist. It’s like they work as one unit. This was my third time seeing them, and the first time as a headliner. The crowd was exuberant, playing into the palm of Chance’s gauntleted hand. I really enjoy Skeletonwitch more every time I see them….they are fun, in their own black metal way. 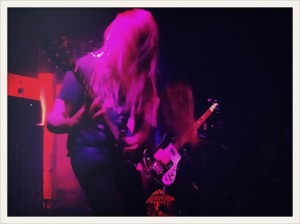 It was nearing 2am as I made the long journey home. As my iPod played on shuffle as it almost always does, I thought about how interesting my life has become over the past couple years. As the songs go from Nine Inch Nails, Jane’s Addiction, Alice in Chains and Rage Against the Machine….to Bison B.C., Evile, Landmine Marathon and Threat Signal….these are more than songs on an iPod for me now. I’m just a small town girl with a small time blog, but I’ve somehow made my life more rock ‘n’ roll than I ever expected. And I don’t know how I’d exist without it.