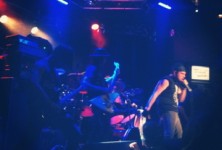 It would be my last show on The Strip for a while.

I was already getting sentimental as I drove there, speeding as my car hugged the familiar curves of the convenient 15 minute trek. As I got to the parking lot I always use, the attendent that I’ve become friendly with over the past 5 months motioned me into ‘my’ front row space. He is one of many friendly faces I see every time I’m down here…all part of my LA experience.

There were all sorts of technical issues amuck this evening, so I found myself loitering outside the Whisky with friends until it was time for White Wizzard to go on. It’s that time of year where the warmth of the day is in stark contrast to the coolness of the night…and the temperature differential between outside on inside The Whisky was enough to make you break a sweat as you walked through the door. 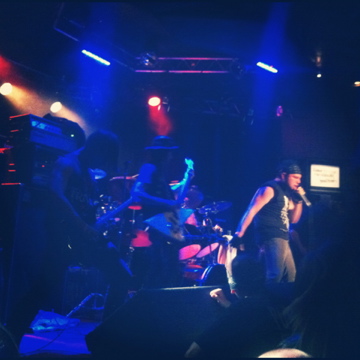 I had never seen White Wizzard before. I’ve been listening to them off and on for a few years, but I think they are one of those bands that has gone through so many lineup changes that I’ve been left a little confused about what is going on with them. And this is apparent when they walk out on stage; they look like a patchwork band made up of members that don’t look like they would be playing the music that I’m hearing. I was admiring the guitarist’s purple flying V when I went to take a photo with my phone and was tapped on the shoulder and told that photos weren’t allowed this evening. OK…looks like we can add Firewind to the list with any Maynard James Keenan project and Danzig as being anti-photo. 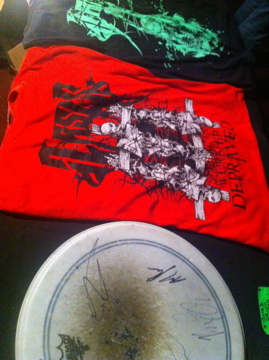 Arsis were on next, and their thrash tinged death metal got the crowd going. Arsis are one of those bands where I watch the guitar work and my eyes can’t even keep up with their fingers. Unfortunately I spent a lot of the set wincing at the crunchy sound coming from one of the speakers…somehow my ears have become more sensitive over the years. I can tell you that Arsis won over that crowd and it was nice to see so many people wander up to their merch booth to buy shirts after their set. Since I couldn’t take a photo of Arsis, I got one of their merch booth. 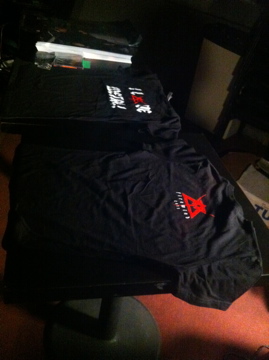 Firewind kinda seems like they’ve become The Gus G Project, since his fame has risen substantially as the guitarist for Ozzy. Coincidentally, I found myself having dinner at a table next to Ozzy and Sharon earlier this week. Melodic power metal is just not for me, though I did have a lot of fun air keyboarding. Gus G’s guitar solos are as lengthy and frequent as they are impressive. At the conclusion of one solo, he actually said, “Piece of cake”. Uhhh…don’t you mean Baklava?! Since Firewind are Greek, and Greek food is one of my favorite things, I also had great fun growling things like “Spanikopita” and “Kalamata Olives” between songs. Since I couldn’t take a photo of Firewind, I got one of their merch booth.

Afterwards, we did the usual hang at The Rainbow, where there were a lot of people already in costume. It was scarier than I could describe to you. 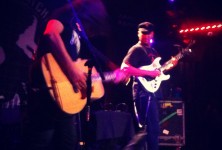 One Man Revolution: The Nightwatchman, Stoll Vaughan @ The Troubadour, 10/25/11 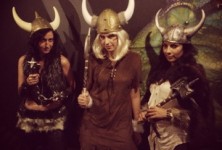