One Man Revolution: The Nightwatchman, Stoll Vaughan @ The Troubadour, 10/25/11

Once upon a time, I was a very politically-minded individual. Throughout school I was heavily into activism, whether it be letter writing for anti animal experimentation in the cosmetics industry, being on the winning debate team for legalizing marijuana and in support of Kevorkian’s assisted suicide, and various pro-choice campaigns and efforts in support of first and second amendment rights. I presented at city council to get them to implement a recycling program that I designed. I tutored kids at a very underprivileged school. I adopted a stretch of highway in my hometown on behalf of my family’s business. I used to truly believe that one person can change the world. 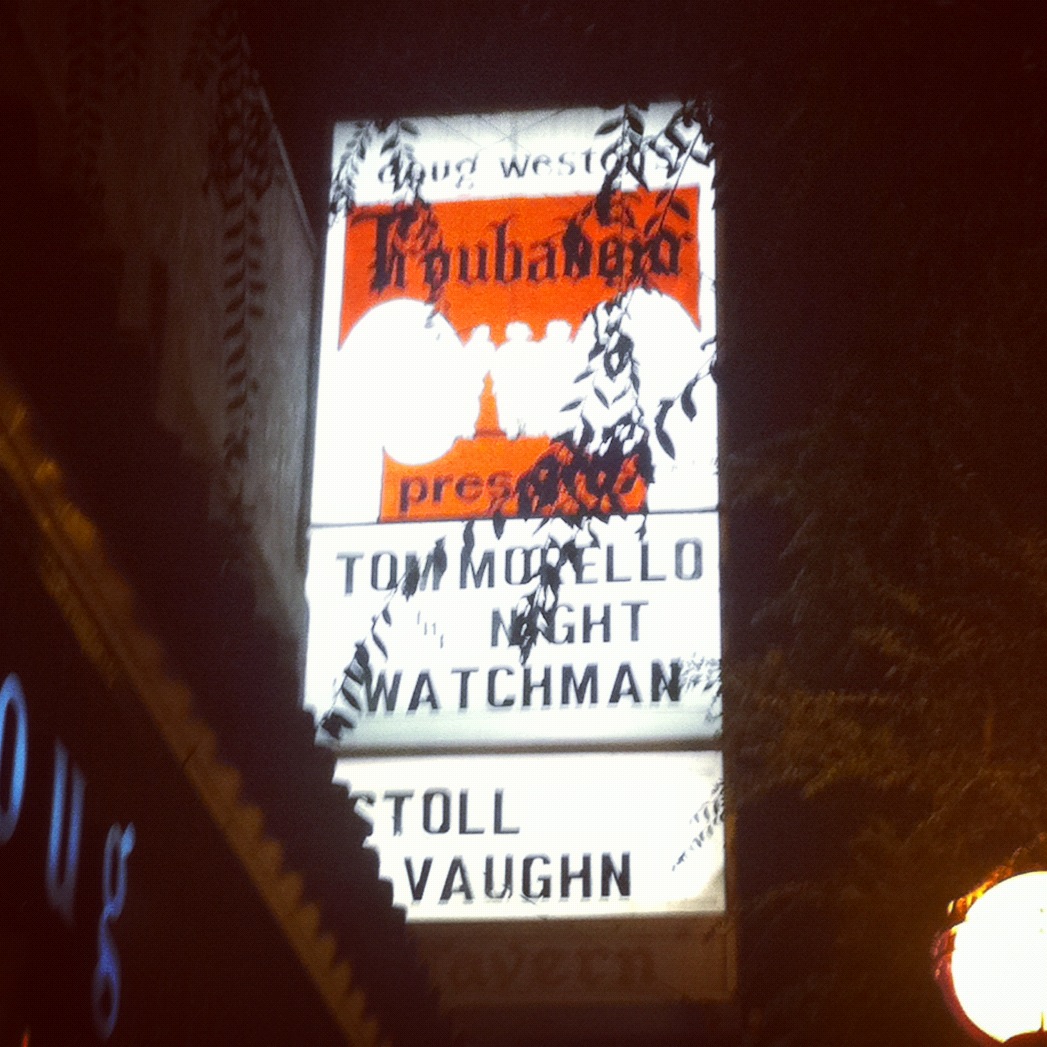 To say that everything changed after 9/11 is an understatement; over the 10 years that followed, each year I think I grew more disgusted with the world we live in. Instead of it motivating me to do something, like a lot of my friends have, I slowly found myself paying less attention to the news, withdrawing from any related discourse…especially when my mom got sick last year. That’s when I realized I physically can’t handle thinking about the world’s problems anymore, it induces panic attacks and deflates my motivation to do anything that requires future planning.

But while I focus on my own little form of philanthropy: being generous with my friends and writing things that entertain a few people and maybe help out a few bands…I have a greater admiration for those who still have the fight in them. And one of my favorite people in that spectrum is Tom Morello.

Morello is probably my favorite all around musician. I’ve seen every project he’s been involved in; I think he’s a very important person in our generation. I respect that, even when he is voicing his political message, he always keeps it about the music.

This show started very strangely…I had noticed that there were quite a few people who looked like they had come straight from Occupy LA…and some of them looked very desheveled. Come to find out, Morello and Co. handed out a bunch of tickets to the Occupy LA crowd, hence the presence of some atypical concert goers in line. Two of those were so wasted that they ended up starting a fight with some guys in suits by the door. As the yelling and screaming were going on, the girl behind us admitted to having ridden to the show with these drunk-os…like as in went with them to Bev-Mo and watched them down crazy amounts of alcohol while she proceeded to ride with them (strangers to her, mind you). Then the fight got physical, and I’m not sure what happened to the drunk duo as they stumbled across the street, hitting the window of a Bentley while en route. Of all the shows I go to…a fight breaks out at this one?!

Once safely inside, the first person I ran into was Carl Restivo, an HRC interview alumnus. After saying hi, I settled in with my friends who were in full force tonight!

Singer/songwriter Stoll Vaughan opened the show. His biographical songs with intricate intros spoken in a Kentucky accent charmed the crowd. I rarely just go to shows where it’s a man and his guitar; it reminds me of where everything begins. He seemed slightly nervous, thanking Morello often and chatting it up with the crowd. This might have been the first time I’ve ever seen someone tie their shoes onstage..twice! During his set, I noticed a very exuberant girl opposite me in the front row, working on a sign for Morello’s set and drawing on herself with the sharpie. 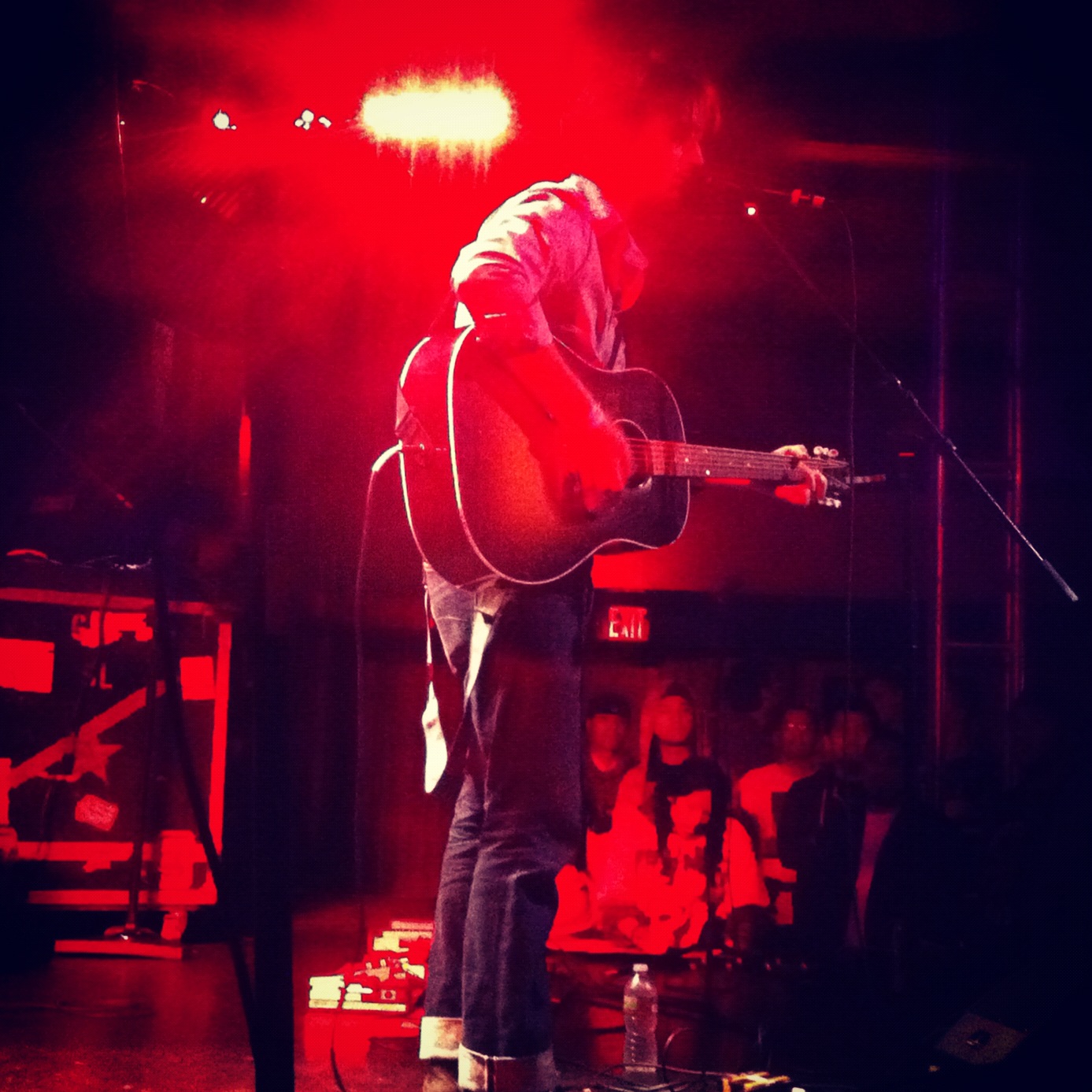 As Tom Morello, The Nightwatchman, walked onstage, the crowd cheered for him, whether he be their musical or political hero. He began to play, just him and the guitar, and the crowd was rapt with attention. As he played, he stomped on a box to give us the most rudimentary beat to get behind. Between songs, he spoke with that perfect balance of conviction and ease. As I listened to his brand of folk metal…I thought about how much it differed from Rage, Audioslave, Street Sweeper…but how perfectly it fit him. If Rage’s music represents the power of the loud masses, Nightwatchman shows the quiet power of one.

Morello is joined a few songs in by Carl Restivo. I’d never heard Carl sing more than backup…he’s got quite the rock ‘n’ roll voice! In the moment where Morello quickly trades his acoustic for the Arm the Homeless electric, the crowd volume rises with the sound of the guitar. Morello tells us a few backstories on the new songs; like writing “Save the Hammer for the Man” with Ben Harper, or introducing his new guitar, which sports the name from the song “Black Spartacus Heart Attack Machine”. 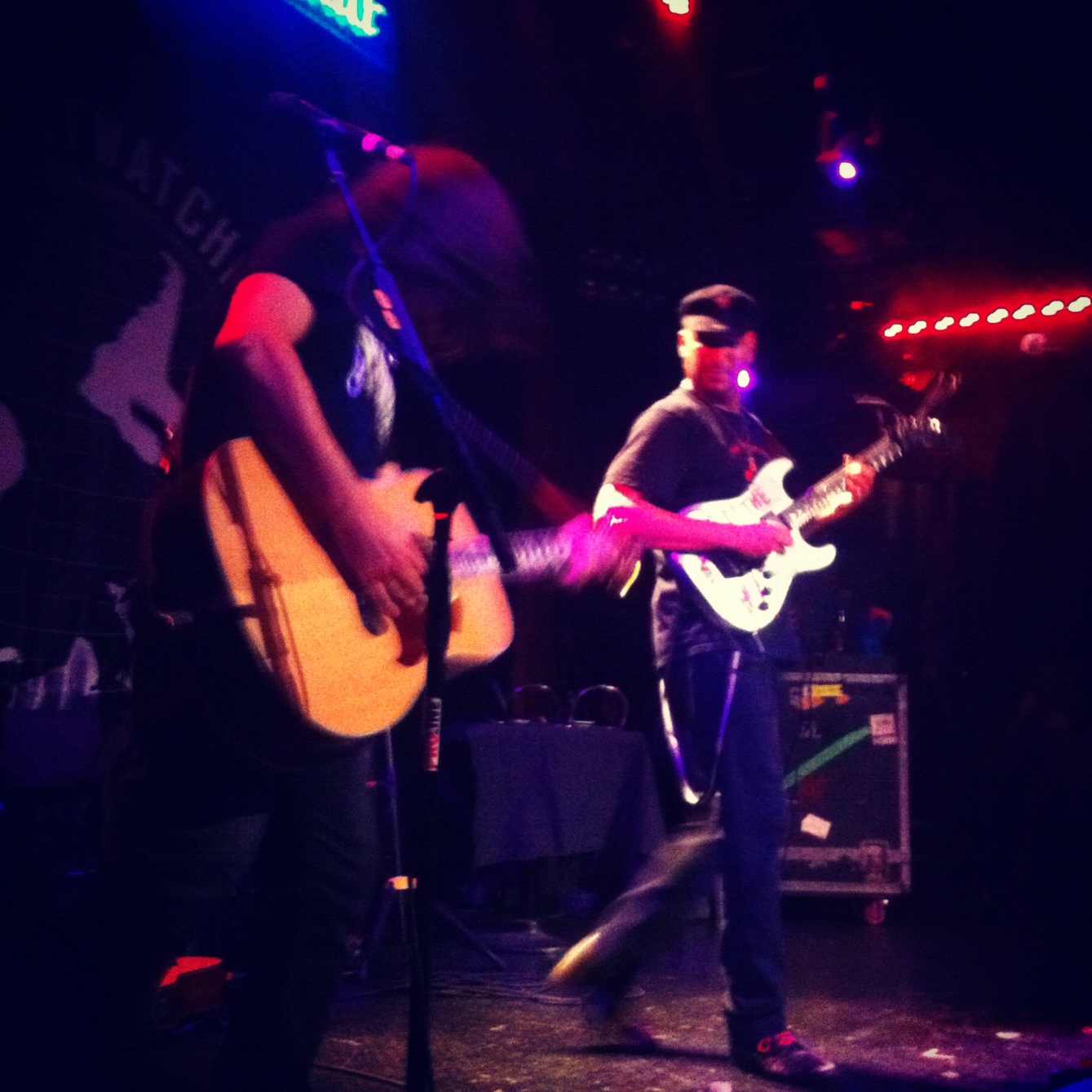 The crowd looks forward to their participation in “This Land is Your Land”, but they really lunge for the stage when invited up for “Worldwide Rebel Songs”. I got kicked in the head as a guy scaled the scaffold at the front corner of the stage, and Morello and Restivo were swarmed by slightly star struck, power drunk, and just plain drunk individuals.

As we all sang along til the end, I felt the motivation to do something bigger than myself come back. 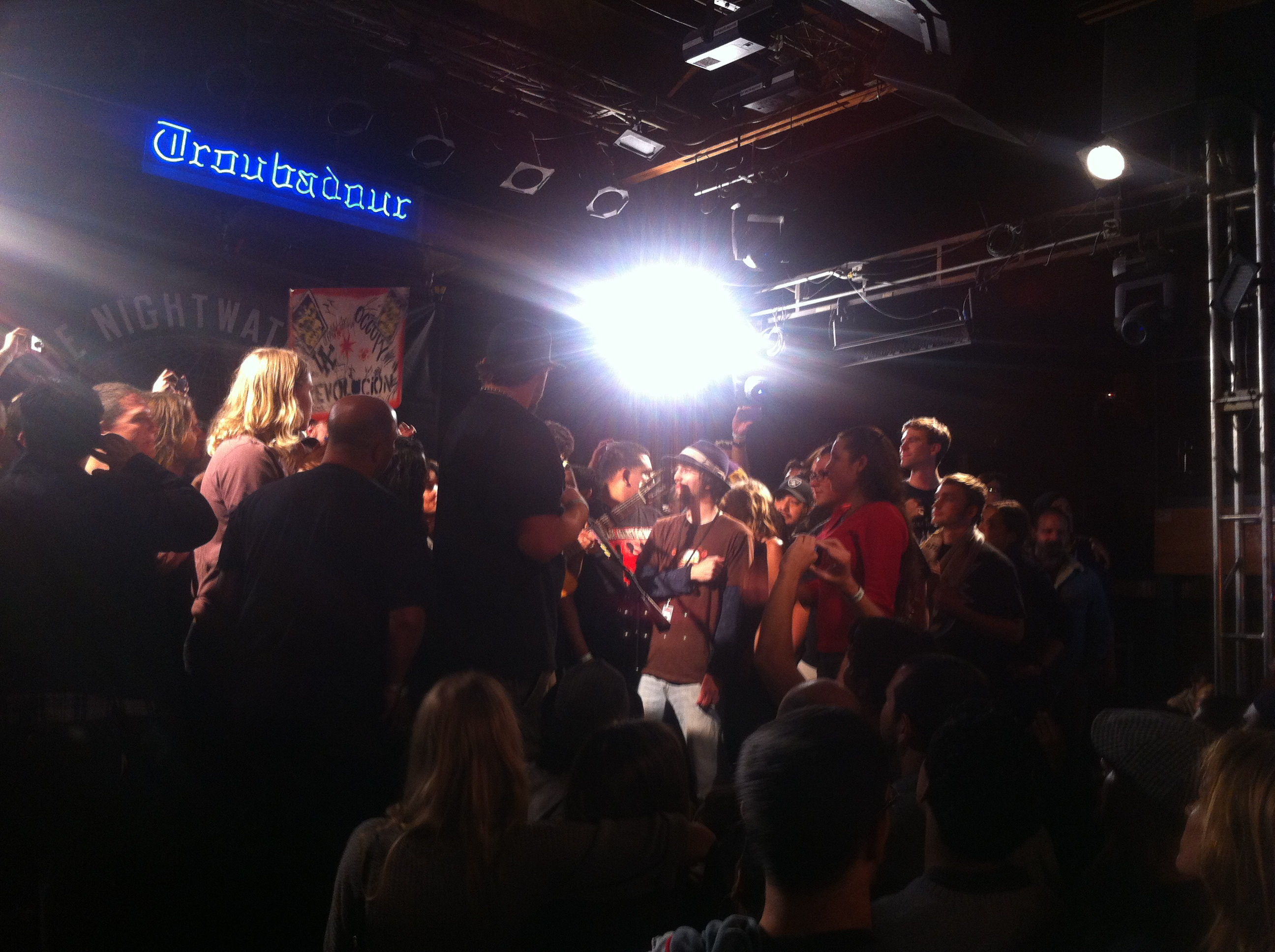 “In my nightmare, the streets are flamed
And in my dreams it’s much the same
And on the streets of LA they know my name
And if you come this far mister maybe we’re one in the same”

~”One Man Revolution, The Nightwatchman