My final show at SXSW would end at the same place it began.

I walked over to the Scoot Inn, my calves quivering from traversing West, South, and now East on this day alone. I heard the low murmur of doom as I approached, but I did not feel it.

$10 later, I was inside watching a band finish up, laughing at the statement, “I don’t know if you’ve ever heard of Pentagram, but they sound a lot like The Sword.”

The floor in front of the stage was fairly empty as people lounged in the corners, treating their sunburns with Lone Star and PBR. Naam began their set, and it was SO LOUD. I could see their mouths moving but I couldn’t even pick out their vocals from everything else. It was like I was listening through foam. Now that I’m hearing them online it sounds much better, but that night I just focused on the bassist, who had the same beard and very similar moves to Troy Sanders of Mastodon, who’s one of my favorites. 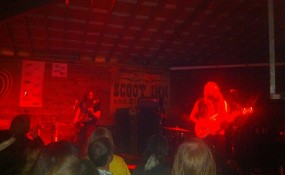 The crowd packed in for eyehategod. When the band was about to begin I saw Pentagram frontman Bobby Liebling pop out on the stage. The last time I saw EHG was incredible, so I knew it was going to be hard to beat that and sure enough it didn’t. Not that it was bad. I think during this set I was really distracted by the crowd, which became like a Saturday Night Live skit. The band erupts on stage, and the guy next to me lights up a joint. Then someone else lights up a blunt. Then a group shares a pipe while someone shields them from the pit. Someone off to the side has a mini bong. Seriously, all we were missing was a vaporizer….which was probably being used somewhere towards the back. So then things turned into a stoner pit….which is a bunch of stoned dudes stumbling around and losing their balance with their backpacks to carry their paraphernalia in hitting people. I found it all highly entertaining to watch. Honestly the crowd seemed more fucked up than the band this time around. 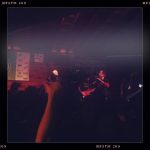 Before Pentagram came on everything hit me and I became incredibly exhausted and couldn’t stop yawning. It was slightly after 1am. I was hoping they would play ‘Forever My Queen’ first like the last time I saw them– my favorite song- so I could bail early, but then I got so excited I ended up staying until the end. Liebling’s moves and facial gestures scared me as usual, yet I could not look away, as usual. 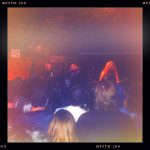 Then something strange happened. I received a note on twitter to be careful leaving because a riot had broken out. Then my girlfriend who I would be heading out with afterwards called, but I couldn’t hear her. So I went on twitter and found out that the riot had broken out at her show- Death From Above 1979. And then, blue and red lights start reflecting off the ceiling over the venue. So I’m starting to think that something really major is happening, and the end of the show is a blur. Once we went to leave, it turns out the lights were an ambulance hauling off someone who had been injured at the show and was unrelated. My friend, on the other hand, sustained a burn on her arm and while she wasn’t close to the pepper spray the cops used her eyes still burned for a day.

So the end of SXSW was kind of dramatic, as we got stuck in terrible traffic and drove all the way back to my Compound that night, arriving just as the sun rose.