Chapel Club were another must see band for me. I’d had one unsuccessful attempt already….a BADGE ONLY show….but this time they were playing their final SXSW set in the parking lot of Waterloo Records for free.

I can remember the moment I heard about Chapel Club. I had just arrived at our condo for Sundance, and my friend who is pretty much the biggest audiophile I know asked me if I’d heard of them. When I said no, he played the song ‘Bodies’ and continued to evangelize them for the rest of the trip. He was the one who showed me a few audiophile turntable reviews and got me hooked into buying one and thanks to him I am able to make a living out of it today.

The Waterloo records set up was great, and they had an impressive line up of free bands over the course of the festival: Meat Puppets and Trail of Dead to name a couple. Not only that, but the stage was sustainable…solar powered! And the shows were streamed live on the Waterloo site. 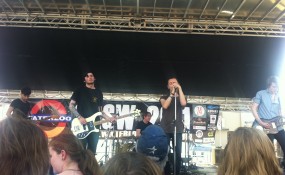 Chapel Club are very influenced by The Smiths and Echo & The Bunnymen. It’s depressing, melancholy music for sure. You could tell that the Brits had had quite the Texas experience….they looked sunburnt and maybe a tad hungover, and the vocalist was having some voice issues. But it was a nice set nonetheless. It was one of those things where I enjoyed it and fully realized that they have more commercial appeal than any other thing I saw at SXSW. Like when the vocalist introduced a song by saying that the girl it was written for was sitting inside the restaurant because she’d heard it enough times already…and all the young girls in the audience sighed. They have just enough conspicuous tattoos to seem rebellious to the good girls. I suspect they will be a huge success this year.