dev@hard
March 22, 2022
7
0
Share Blog on
“We hold each other closer, as we shift to overdrive
And everything goes rushing by, with every nerve alive
We move so fast it seems as though we’ve taken to the sky
Love machines in harmony, we hear the engines cry.
I’m your turbo lover
Tell me there’s no other
I’m your turbo lover
Better run for cover”
“Turbo Lover”, Judas Priest
We looked like we had either just stumbled out of the Sunset Strip circa 1988 or Folsom Street 1993, but we were actually coming from a really nice restaurant at the Cosmopolitan where we had a multi-star meal and too many drinks and, because we watch a lot of ’80s/’90s era professional wrestling, we though it was appropriate to take turns making Nature Boy “WOOOOooos” as we made our way over to Planet Hollywood.  It was time to let loose. Live a little!

About a 100 years ago, we had planned to go to this show in Texas before moving back to California. I don’t go to nearly as many concerts as I used to, and my main focus now is seeing the artists that somehow I hadn’t seen yet.  Yep, it’s true: I HAD NEVER SEEN JUDAS PRIEST BEFORE.  TAKE MY METAL CARD!
Let me explain: this has to do in part with the fact that when I was coming of age, Priest sounded, well… cheesy as hell to me.  Maiden, too.  This was the metal that your friends bad uncle who had done some time listened to, and while you let him buy you beer, you did not like the way he made you hug him for it; also, it was just not cool at the place and time where I was forming my musical tastes.  Ugh, this is embarrassing to admit.
Many years would pass, and I would try, and try again… and sometimes it would sound ok, but there was always so much else to listen to and see.  It just wasn’t a priority.
Then I turned 35. Some people start thinking Yacht Rock suddenly sounds good; this was when what I used to call the “cheesy metal” started sounding really good to me.  Then I got my ’78 Bandit Trans Am and….

….YOU HAVE NOT LIVED UNTIL YOU’VE TORN ASS DOWN A BACKROAD IN A TRANS AM BLASTING PAINKILLER!
So, I’ve been making up for lost time.  We listened to the audiobook version of Rob Halford’s Confess when it came out, and I have to say, it was really difficult to get through (even though I highly recommend listening to him read it).  It made me incredibly sad. 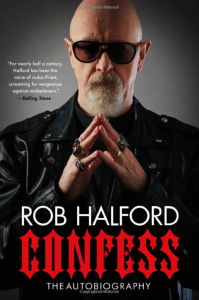 The encore featured three songs with their original guitarist Glenn Tipton.  Halford’s energy noticeably piqued when Tipton entered the stage for “Metal Gods”, “Breaking the Law”, and “Living After Midnight”.  It was an awesome way to end the show.
I have to say that, while the show was great, it was a “show” and it did not have that wild, I’m-at-a-metal-concert energy that I was kind of looking for/needing.  I know, I know… I’m old, he’s old, maybe these days are over?  Nah… no way.
“He is the painkiller
This is the painkiller
Planets devastated
Mankind’s on its knees
A savior comes from out the skies
In answer to their pleas”
“Painkiller”, Judas Priest
Someone recorded the whole show and you can watch it here!
Newer Post