Recoil: A month off in Asia and Australasia

Well, the two month sabbatical is over. With the exception of writing a couple GRAMMY blogs from Cambodia and New Zealand, I kept off the computer as much as possible. Did I completely escape from thinking about music like I was going to write about it for two months? Hell no!

– As I was leaving for Cambodia, a twitter follower pointed out that Robert Been from Black Rebel Motorcycle Club had recently been on a trip there in association with a benefit concert that I saw them play in LA. I saved the link but didn’t have time to read it before I left. Upon returning, I finally read it. The cat in one of his photos appears to be the same one we encountered while visiting Beng Mealea as well!

– After a little over a week in Cambodia and Thailand, I was in Koh Lipe, a very small island off the southwest coast of Thailand in the Andaman Sea. Besides seeing one Suicide Silence shirt in that entire time, I had not seen anything to remind me of music. In fact, in Cambodia, I asked our driver if rock or metal music was popular there, and he didn’t even know what I was talking about. We found a tiki bar in Koh Lipe called Tattoo, and when the bartender turned around I noticed he was wearing…a Carnivore shirt! I could barely contain my excitement.

– While on a speedboat traveling from one Thai island to the next you can only listen to metal! It fits these chunks of islands so perfectly it makes the music sound exactly how I imagine its creators intended it to.

– In Bangkok, the street vendors who sell bootleg t-shirts have Slayer shirts next to Bullet For My Valentine next to Justin Bieber….

– My friends started a metal networking site called Metalluminati, which I’m a member of. Through that site, I was hooked up with some new friends to hang out with in Australia. Major thanks to 4ARM and Recoil v.o.r. for showing me around Melbourne and Sydney!

I even got my own little montage! 🙂

– In Sydney I did end up going to one show at The Gaelic. I saw locals The Dead Love play a good set of grunge rock, followed by TheART. TheART apparently opened for NIN on their Australian tour in 2005. This is also where I learned that Australian shots come in tiny little cups. As we left this show, we intermingled with everyone leaving a huge Eminem/Lil Wayne concert down the street…. 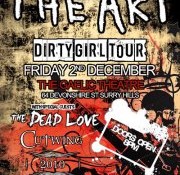 – In Auckland, I went to the historic rock venue The Kings Arms and watched some local, young metal bands play while they barbecued outside. It’s funny how once inside a venue it’s easy to forget that you’re halfway around the world, especially when there are Slayer shirts around you and Metallica on the speakers. On my final night, I stumbled upon an interesting duo in Father Ted’s Irish Pub in downtown Auckland. One looked like an older Jerry Cantrell, the other, Dio’s grandson…and they played covers on an electric mandolin with distortion. It was pretty neat. When my friend asked the mandolin wielder how he came up with that, he simply said “take risks”. And the next day before hopping on my flight, I did just that.

I’m lucky to have traveled all over the place this year. Did it solve all my problems? Not really. But it did give me perspective into what’s important in this world, and how music plays a huge part in bonding some of us together.