The Clive Davis party is one of the most exclusive nights in music….so me being there feels weird all on its own. But nothing….NOTHING…will ever top this year.

I was watching Exhumed at The Roxy when I received a text that Whitney Houston had died. Now, I think somewhere in the back of all of our heads, we were expecting it. But then I realized that merely hours later, I would be at the party I saw her perform at last year. And then I found out that she died in the very hotel that the party would be in that night…because she was going to be there. 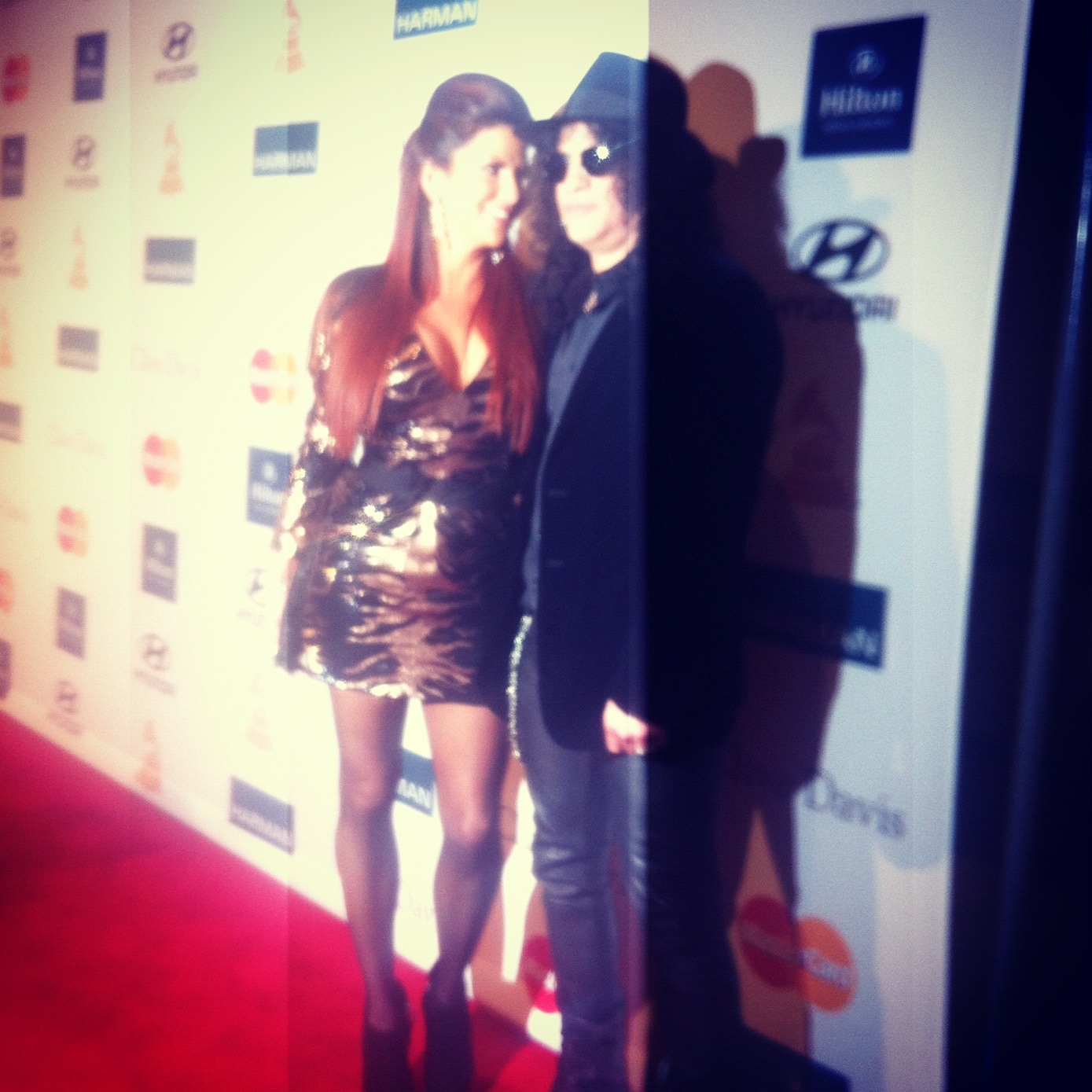 After thinking about whether or not I should go- which is what everyone went through who was attending this party- I decided that I would go ahead and attend. I went there expecting the worst, and in many ways that’s exactly what I got.

The entire property on the Beverly Hilton was encased in media trucks. As I parked my car, there were reporters doing news stories on the lawn, which is where I learned that she had died on the fourth floor and that her body was still in the building. As someone who is highly affected by the energy of my surroundings- this was about as bad as it gets. 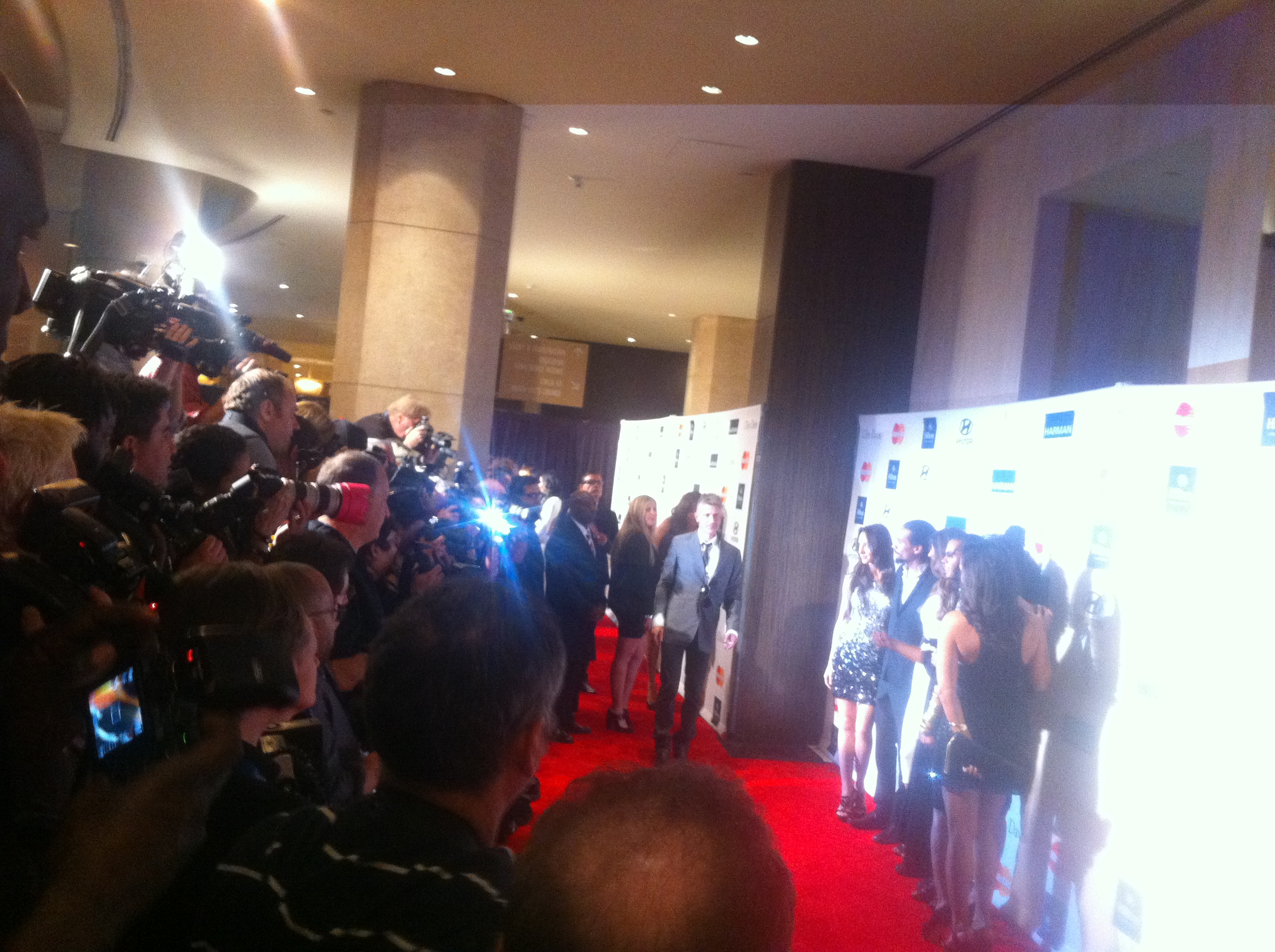 But this did not stop the gawkers looking to get cell phone pics of celebrities walking in from focusing on their goal, which distracted me as I walked in right in front of Larry King. Then I had a list snafu which left me in lobby limbo for nearly an hour.

When that was figured out, I was able to be on the red carpet for the last hour, walking in right in front of Slash and Perla. I also gotta see one of the nights honorees- Diana Ross- walk down with her family. 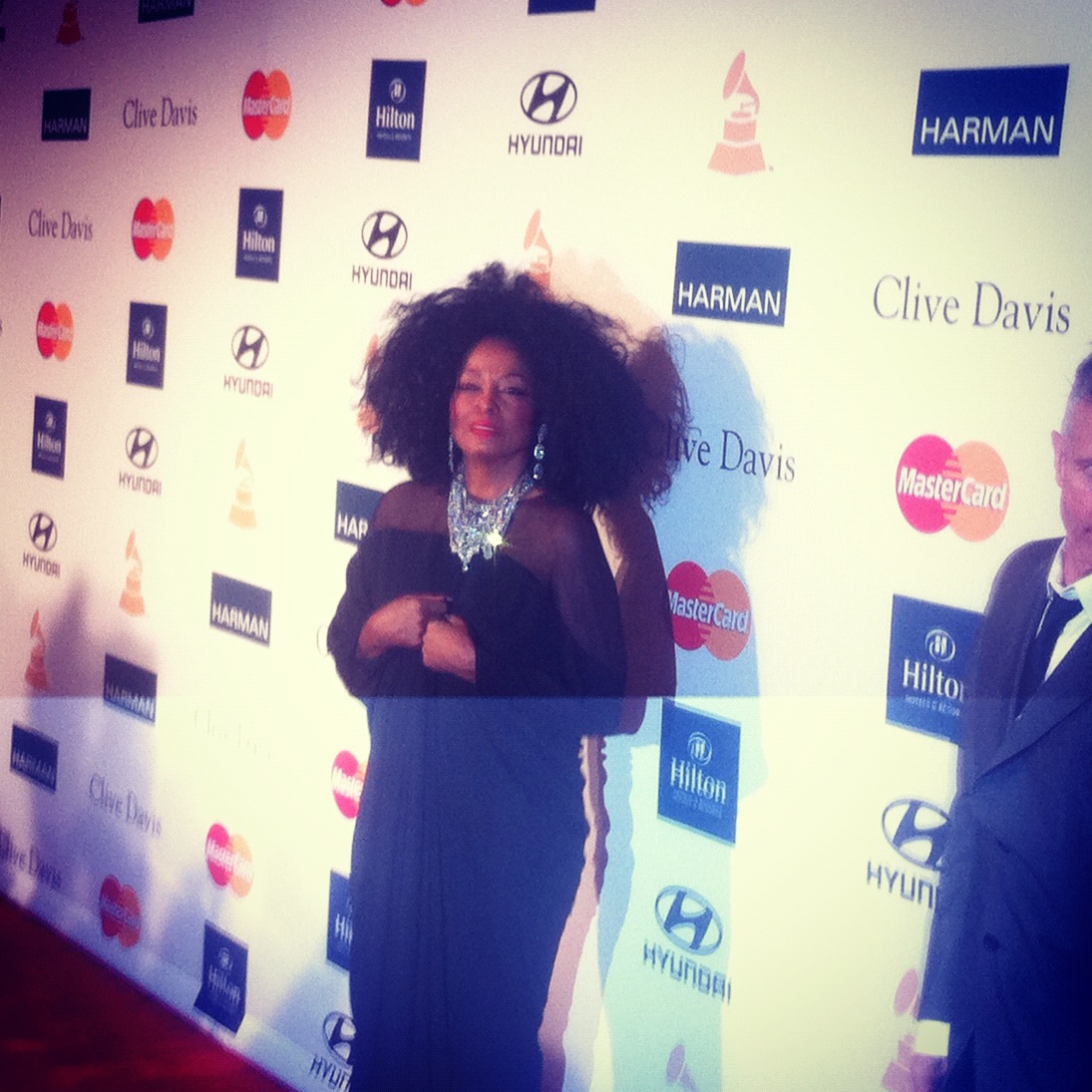 Off to the media room for the show, it was odd to be surrounded by the media I’ve consumed and dreamed of working for my whole life scrambling to put together their Whitney Houston stories. The mood was this odd combo of somber and frantic…until the live feed of the party began, and it just became flat out somber.

Clive Davis emerged at the podium, and could barely speak. We weren’t sure he would even attend, but he handled it with grace. He spoke of his relationship with Houston, and said that her family asked that the party go on. We all had a moment of silence.

Tony Bennett, who was intertwined with the death of Amy Winehouse due to their collaboration, made an unexpected statement about the need to legalize drugs so that we can control them better. 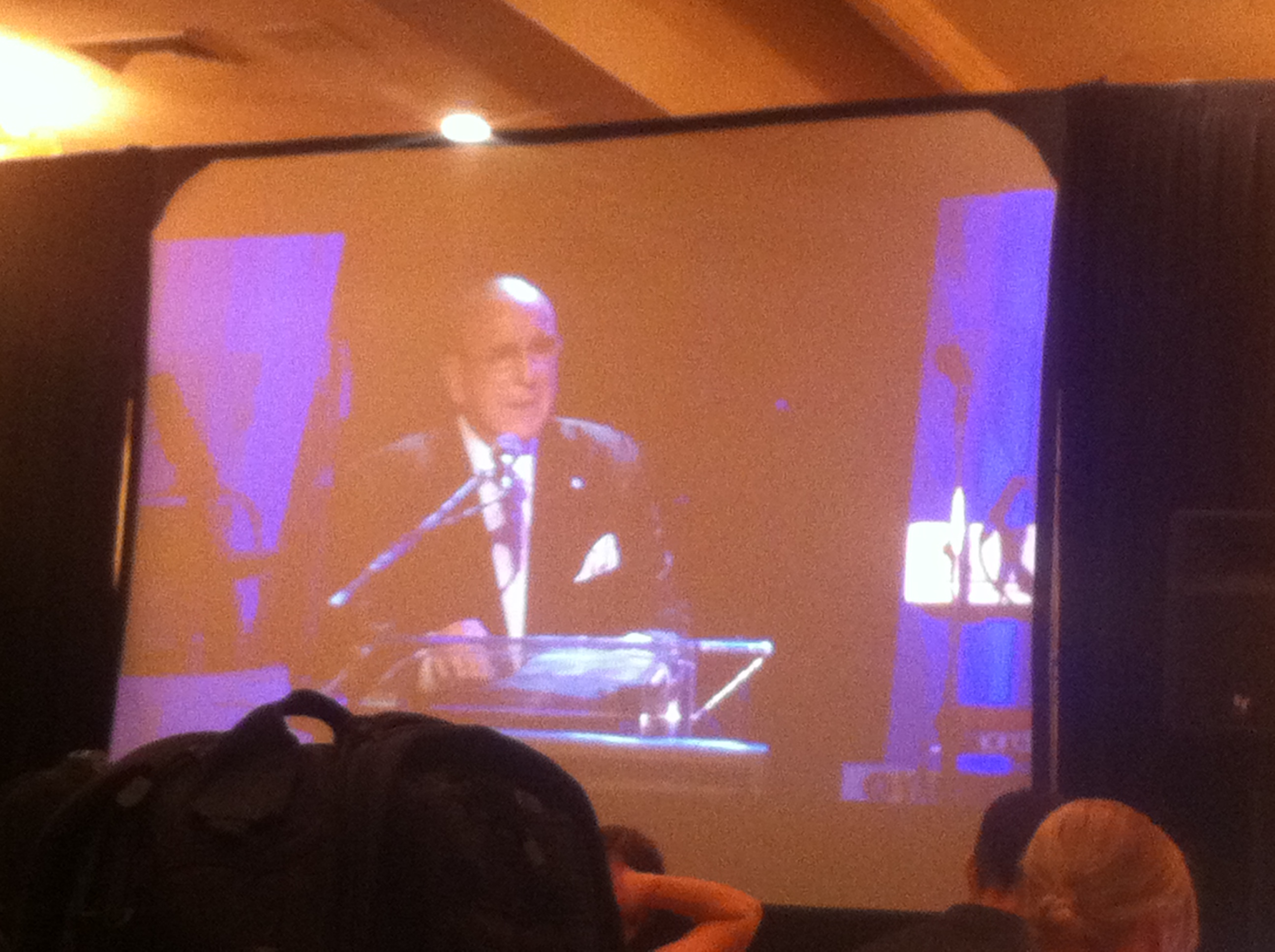 Neil Portnow spoke of how when they considered canceling the party, he heard her saying “the show must go on”. Tonight’s party was apparently her favorite night of the year, making the timing of this entire thing more difficult to take in than the actual death itself.

But the best speech came from Diddy. His heartfelt, seemingly off the cuff words about Houston touched us all, and I loved that he balanced that with finishing with parts of his original speech. It shows the talent of a true entertainer when they can handle something like this properly.

The tribute to The Kinks lightened the mood, as they played a longer than anticipated set, including collaborations with Jackson Browne and Elvis Costello. It was wild to hear some of those classic rock songs live for the first time….the raw, unpolished energy was such a stark, meaningful contrast to most of the other stuff that I had been hearing. “All Day and All of the Night” went into a medley of “Waterloo Sunset and “Celluloid Heroes”, followed by “Lola” and “You Really Got Me”. 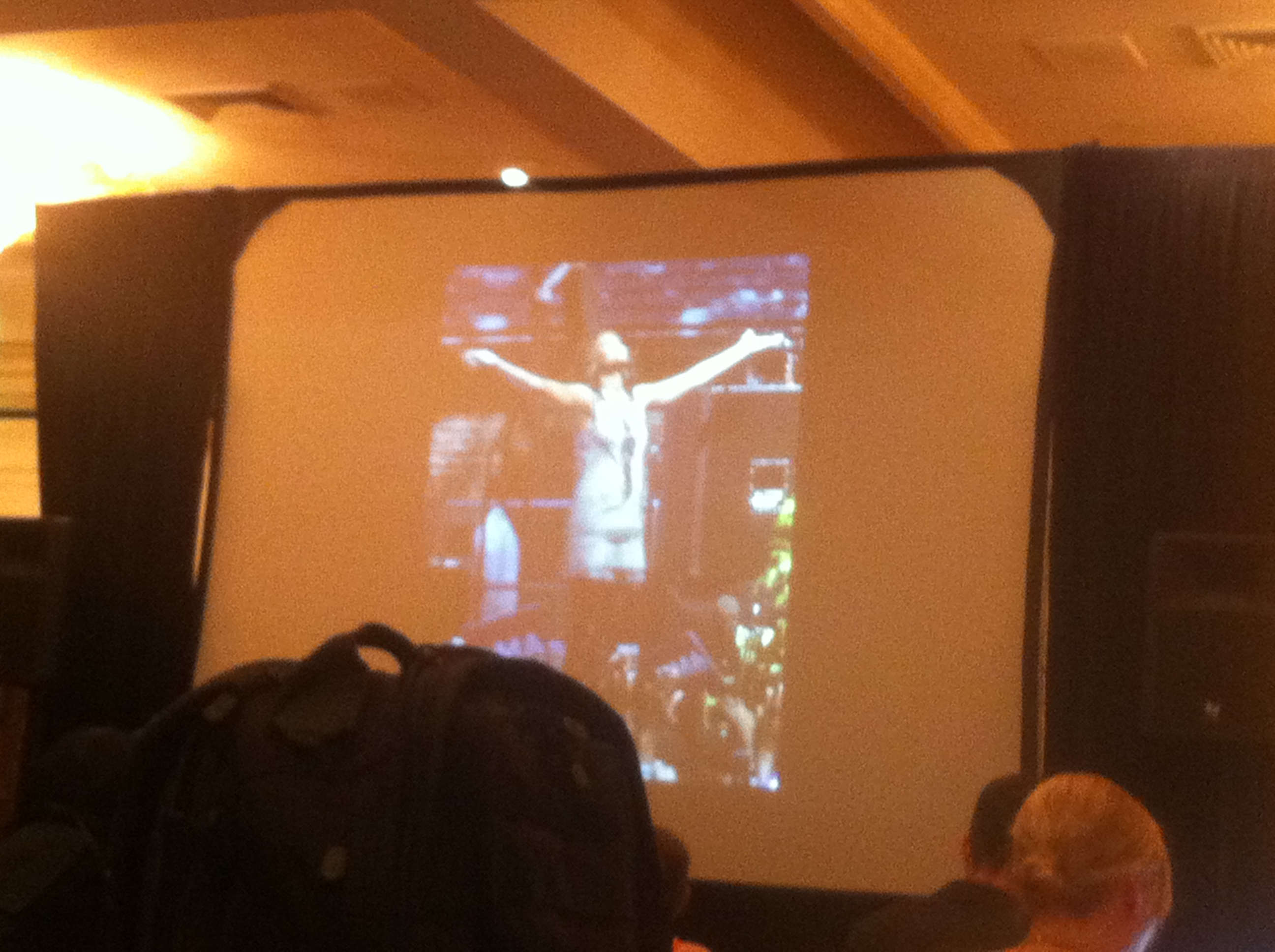 Part of the Clive Davis party includes a call out of the attendees: Joni Mitchell, Neil Young, and John Fogerty were all at the same table…Donovan, Sly from The Family Stone, and Dr. Dre at another…Tom Hanks at another…Daniel Ek of Spotify and Sean Parker of Facebook at another…Danielle Steele and Jackie Collins at yet another. It spoke to the diversity of this party and how the music industry draws from other corners of the entertainment industry.

Diane Krall played piano and sang quietly, as did Alicia Keys, who had some heartfelt, distraught words to say, including breaking out a line of “I Wanna Dance with Somebody” before singing “New York State of Mind.”.

Pitbull and Ne-Yo performed, as did Wiz Khalifa (you know that “Black and Yellow” song), and an up and coming singer Jessie J.

Jane Fonda introduced Lifetime Achievement Award honoree Richard Branson, who in turn told an embarrassing story about his painful memory of Fonda- which had to do with a late in life circumcision and watching Barbarella shortly after the surgery. Virgin Records signed everyone from Devo to the Sex Pistols…and Branson, to me, is a rock star himself considering all of the crazy adrenaline junkie things he’s done.

Diana Ross was also honored with a Lifetime Achievement Award. Jamie Foxx started singing “Ain’t No Mountain High Enough”, which was soon taken over by Ross herself. This had the party ending on a high note, but as the crowd trickled out of the room and I walked by Kathy Griffin and Dwight Yoakum, this quickly led back into the vicious paparazzi, looking for the coroner, who had apparently been spotted around the building.

I remember being a little girl, dancing to Whitney Houston when life was so carefree. From there to now, it reminded me of the harsh path that life can take.