GRAMMY Foundation’s Music Preservation Project: “One Night Only”: A Celebration of the Live Music Experience

There’s been one thing that has remained completely consistent on this blog since it started five years ago, and that’s my focus on the live music experience. Since I can remember, I’ve been infatuated with live music, and have made it my life’s mission to be able to say “I was there” to a lot of spectacular things. I’ve done crazy things in the name of this love for live music, and I was ecstatic to be at an event celebrating the preservation of something so near and dear to my heart. 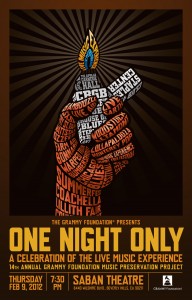 My night began on the red carpet, where I was pretty proud of little old me stepping it up and asking for interviews with some of the biggest names in music. I’m more of an in depth interview gal, so these short little mindless questions were a bit of a switch up for me…but it was pretty amazing nontheless. I spoke to Steve Vai about his favorite show- his first one, Led Zeppelin at Madison Square Garden from the back row at 14 years old- a story he later shared during the show, and then his thoughts on sharing the concert experience via YouTube and Twitter. 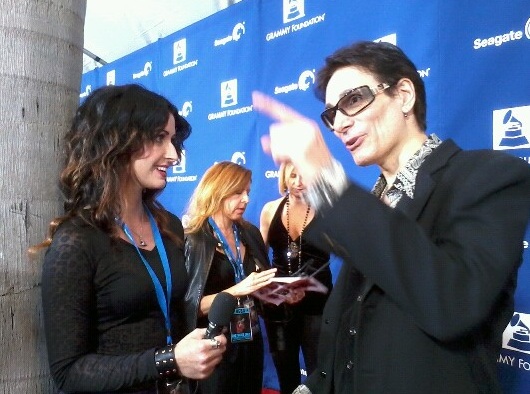 Next I spoke to Sharon Osbourne, who, despite the current Black Sabbath reunion controversy, was charming and complimented me on my Vivienne Westwood necklace. When asked about her favorite live music moments, she- rightfully so- couldn’t chose, and just spent a minute or so naming a slew of musicians she saw in their heydey that sounded like a Rolling Stone retrospective: John Lee Hooker, Led Zeppelin, Black Sabbath, and on and on. She said she understood the desire to share the concert experience on social media as long as it’s positive, talking about how times are changing and that is just a part of it. 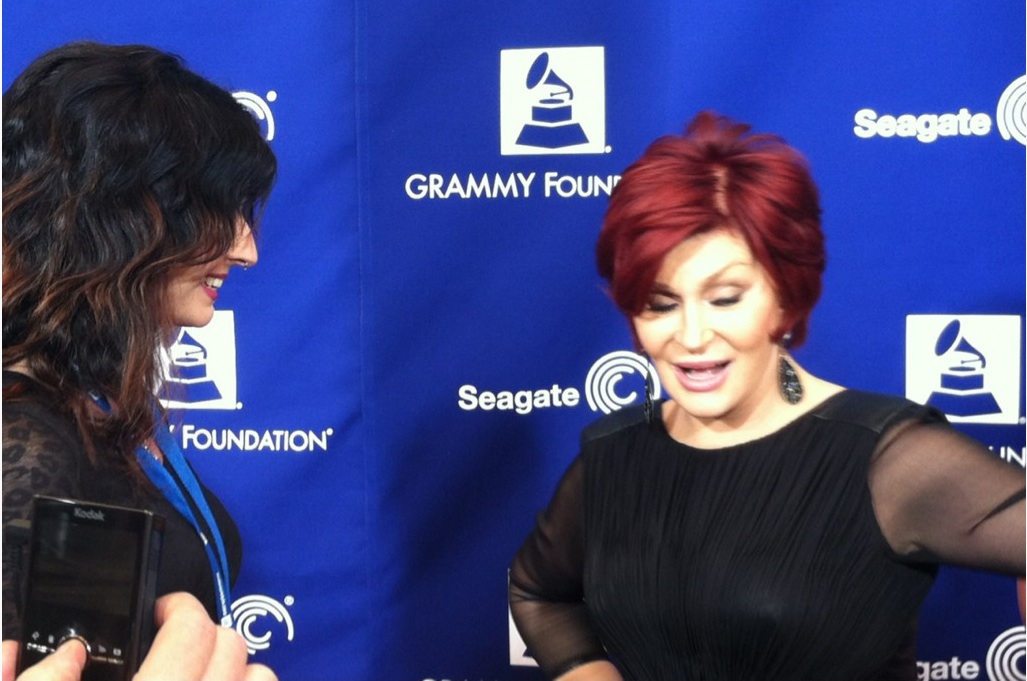 Jonny Lang, being the rager on guitar as he is, was so softspoken as he told me about seeing a local blues musician in his hometown that made him instantly made him realize what he wanted to do.

Bret Michaels spoke of his first arena show- Foghat and Sweet- and gave a great multi-sensory description of loving every element of it from the smell to the pyro, and how it made him want to be a rock star. He went on to describe how his style as “a combination of AC/DC and Heehaw” because of his parents’ love of country music. 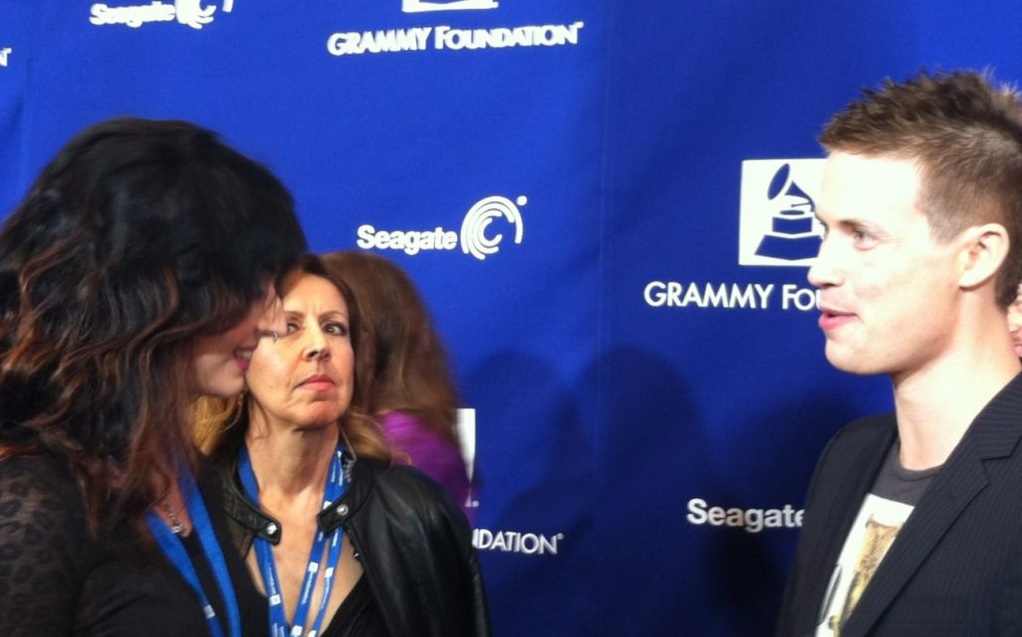 Once inside and the show began, we were treated to a retrospective of music through the filters of different iconic music venues: The Apollo, The Opry, The Troubadour, Crocodile Cafe, The Paramount, The Savoy, and BB Kings. Sharon Osbourne and Steve Vai co-hosted the evening, and their respective expertise both behind the scenes and on the stage gave a heartfelt homage to live music.

The Colburn Orchestra began the evening, and then the performances explored so many different spaces in music, all equally fantastical. Trombone Shorty and Dave Koz dazzled in the brass department- Trombone Shorty held a note for so long at one point we wondered if it would ever end. A Fine Frenzy delicately played the piano and mesmerized the crowd with her angelic voice. Ledisi doled out her stylish soul, followed by the charming Mavis Staples and then a collaboration with Ledisi, Koz, and Trombone Shorty had the crowd on their feet. 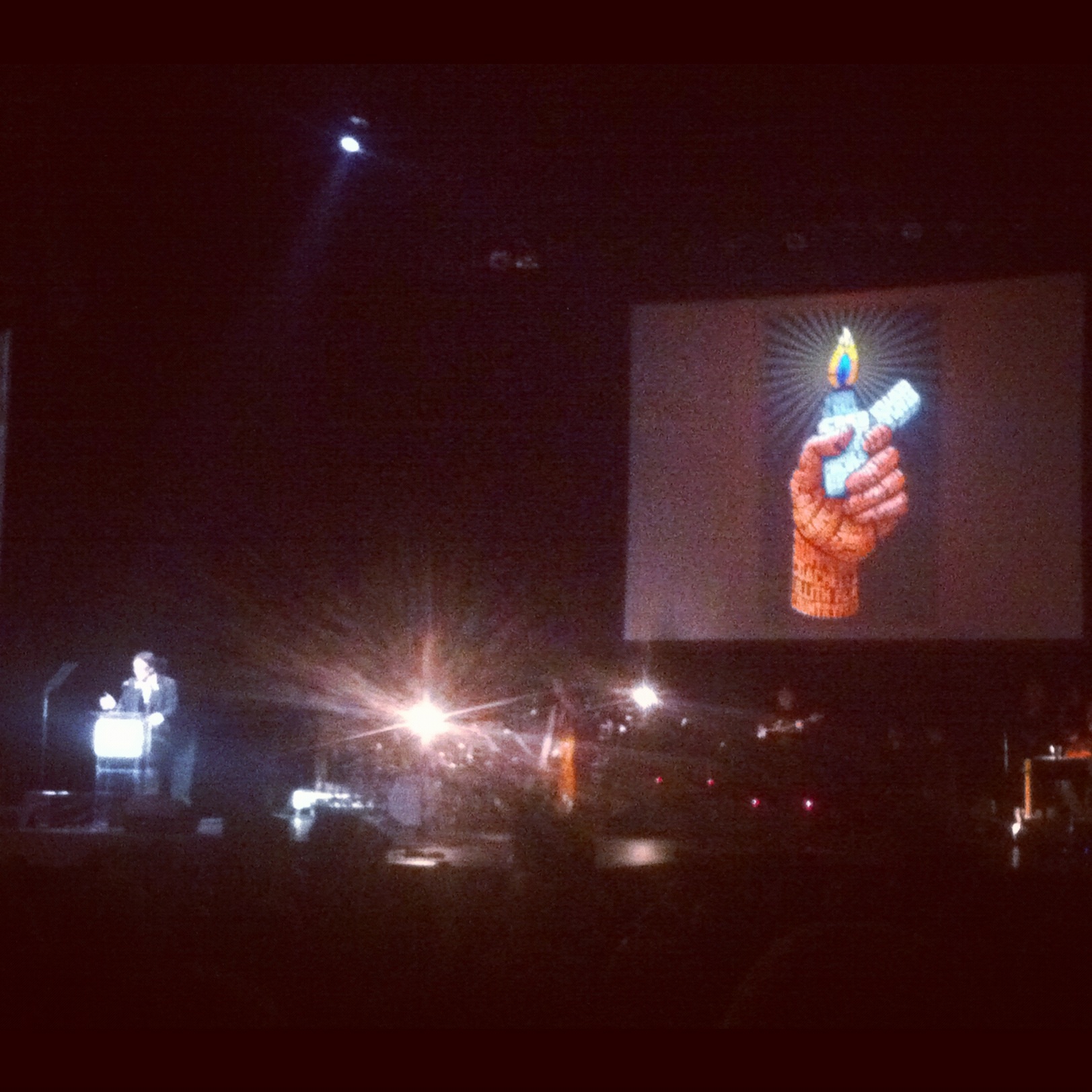 Shelby Lynne performed a heartbreaking rendition of George Jones’ “He Stopped Loving Her Today”. Then LP- who I was not aware of prior to this- came out and completely blew my mind. She performed a cover of Radiohead’s “Creep” that gave me chills and completely mesmerized the crowd. It was great to have a moment like that in this kind of setting- I generally only experience that at my rock or metal shows.

Robert Cray sang us the blues, and Jonny Lang played a smokin’ blues guitar. Then Beverly McClellan from The Voice sang a killer Janis Joplin cover, and Marc Martel, winner of Queen Extravaganza, channeled Freddie Mercury for a medley to celebrate charity and live music, specifically Live Aid. As he sang Bohemian Rhapsody, I couldn’t help but headbang along, even if the rest of the crowd was not.

Closing the show was Bret Michaels of Poison fame, who played a few songs, including “Nothin But A Good Time” and the song that “changed his life” – “Every Rose Has It’s Thorn”. Upon Sharon Osbourne’s instruction to get out of our seats, we sang and danced along as Michaels wooed the crowd with his signature split kicks. “This is the closest I’ve come to winning a GRAMMY” he said.

As I left the show, I thought about how much live music has meant to my life, and how by having this little blog, I’m doing my best to preserve the memory of live music in my own little way.