It was the kind of day where the music addict in me took over, tried to do multiple crazy things, and failed to get it’s fix.

On Thursday, it was leaked that Soundgarden would be doing a secret show Friday night in Seattle. I was thisclose to hopping on a plane with no idea of how I would get into the show. They are one of my favorite bands…I never got to see them back in the day…and ever since their reunion was announced at the beginning of the year, I had concocted that part of HRC’s ‘story’ was that I would be there the first time they played. But I decided to take the responsible route.

Then, I thought I would go see Dead Weather again, since last night was so good, and it ended early enough that I could catch my originally planned show at Slim’s. But it was completely sold out, and Craigslist didn’t yield any reasonable ticket opportunities.

I was walking through the empty, industrial area that lies between my apartment and Slim’s thinking about things. There was actually something that made a lot of sense about me going to this show. For one, Wolves in the Throne Room recently played a large role in helping out John Cobbett of Ludicra when his appendix burst at the beginning of their tour. It is an awful situation (musicians->no insurance) that mimics the current health care crisis. It was cool to see the metal community come together to pitch in to help, and now that Wolves were playing Ludicra’s town, it made sense to go show them respect. Also, Dylan Carlson of Earth is perhaps best know for being the person that purchased the shotgun that Kurt Cobain used to kill himself. I found it very interesting that while one of the Seattle bands was coming back to life that very night in Seattle, I would be seeing a Seattle band whose member had a small role the death of grunge.

I walked in and Lori Goldston was playing cello onstage. It was very slow and atmospheric, and the crowd was kind of like ‘whatttttt?’ but I found it soothing. In the middle of the stage next to her were several pieces of wood pieced together as a centerpiece. Since I had the Pacific Northwest on the brain, it made me think of this. 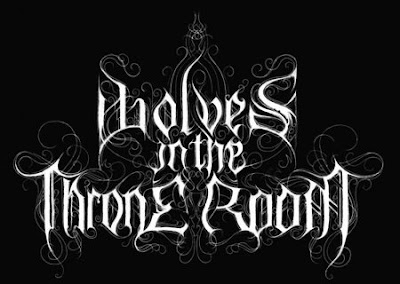 As Wolves in the Throne Room began, the room was shrouded in darkness and the smoke thickened. It became very crowded, and as their black metal filled the room, I actually felt a bit claustrophobic, which is rare for me. They sounded great, and it was exactly what I needed. They had tapestries framing the back of the stage, the white art lighting up against the black background. The bassist, who was nearest to me, faced the drums and kept his back to the crowd the entire time. Since there wasn’t much to look at on stage, I kept noticing how one of the small lights at the front of the stage cast shadows on the back corner of the stage. It looked like someone was doing shadow puppets, so I imagined it was some satanic skit involving wolves and a forest. I could occasionally see the drummer, who is quite amazing, as he should be since the drummer in black metal is what makes or breaks the band. At one point, when I was moving my head along to the beat a bit, the guy next to me looked over and grabbed my shoulder excitedly, lifted his hand in the claw, growled and smiled at me. Hahaha, this is why I love going to metal shows….the passionate, energetic crowds.

Earth came on stage close to midnight. Before even beginning, Carlson introduced the band, which included Goldston on cello. Then he gave a short introduction to what they’ve been doing before launching into the first song, ‘The Bees Made Honey in the Lion’s Skull’. I’ve never had a set start out like that; it felt very old school. The slow, spaced out music was such an incredible contrast to Wolves’ faster, Faster, FASTER, that I immediately wished they had played before them. I’ve always heard that it’s harder to play slower like this, and watching them definitely reminded me of the skill in timing that they have. However, the space between notes allowed me to hear some metal equipment boxes vibrating near me, and it was as irritating as a blown speaker. They moved on to a new song that will likely be on an album they are about to record. The music was lulling me into a trance that kept being interrupted by the vibrating sounds and people leaving all around me. I made it about 40 minutes before I decided I needed to leave to make the walk back home. I much prefer listening to Earth at home than seeing them live. As I turned around to leave, I noticed that all of the people that had been near me in the beginning had been replaced by guys with beards. It was kind of trippy…