As I approached the sprawling metropolis of the place of my birth, I began to feel weird. Partially because I’d been going nonstop, partially because I had just driven three hours to see a show, and partially because I was exiting the freeway to take a trip down memory lane. The house I grew up in….my elementary school…the first location of my family business…my middle school. Looking at those places and feeling those memories was surreal; so much of life is already gone…so many intentions set in those places have gone awry….so many people that were there are no more. 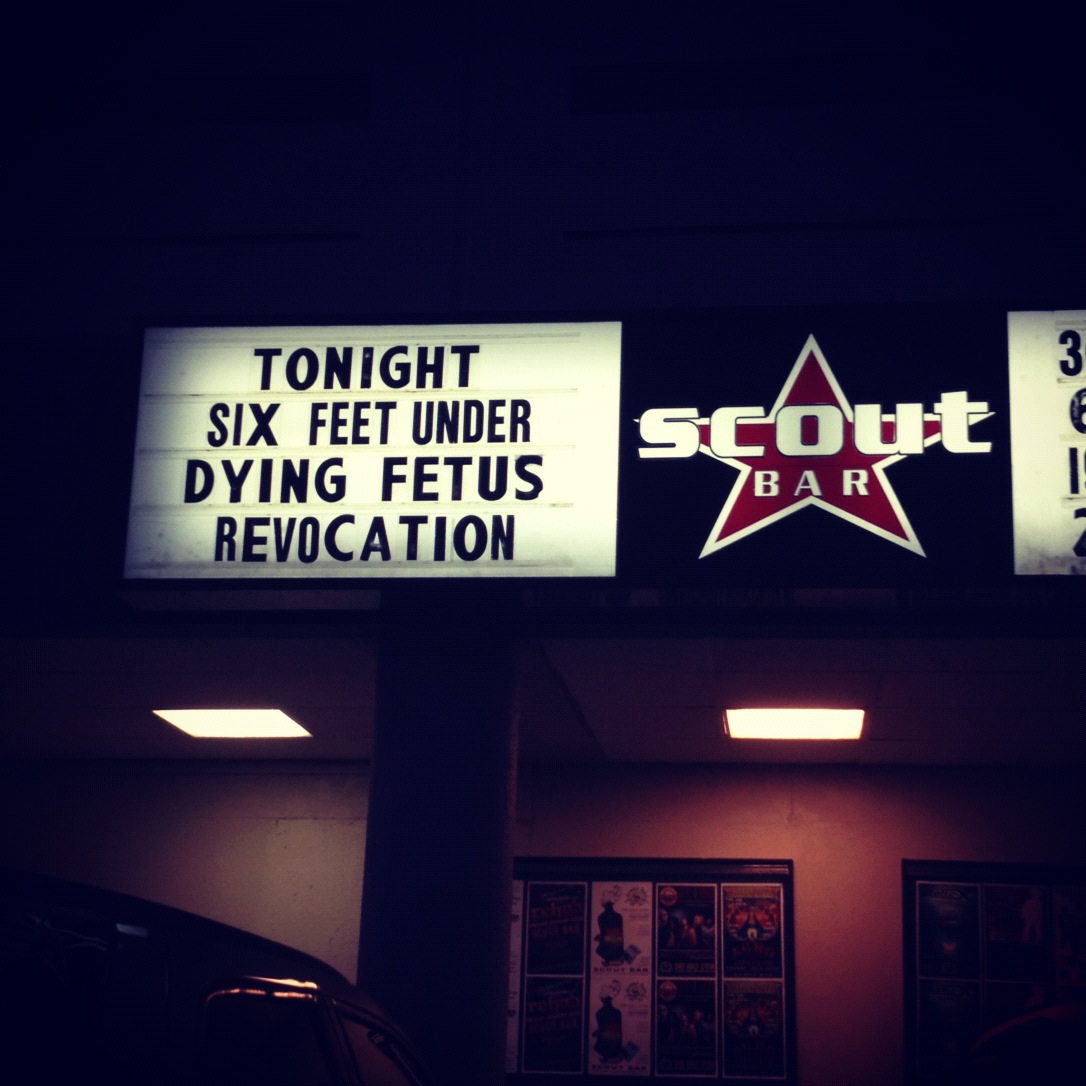 I had only been to one show in recent years in Houston, when I first followed Mastodon all over the place. I had no idea what to expect from Scout Bar, which was one the far side of Houston, close to NASA. A mid-sized space with similar decor to a Hard Rock Cafe, I felt a little bit of a Cheers vibe as I walked in by myself. 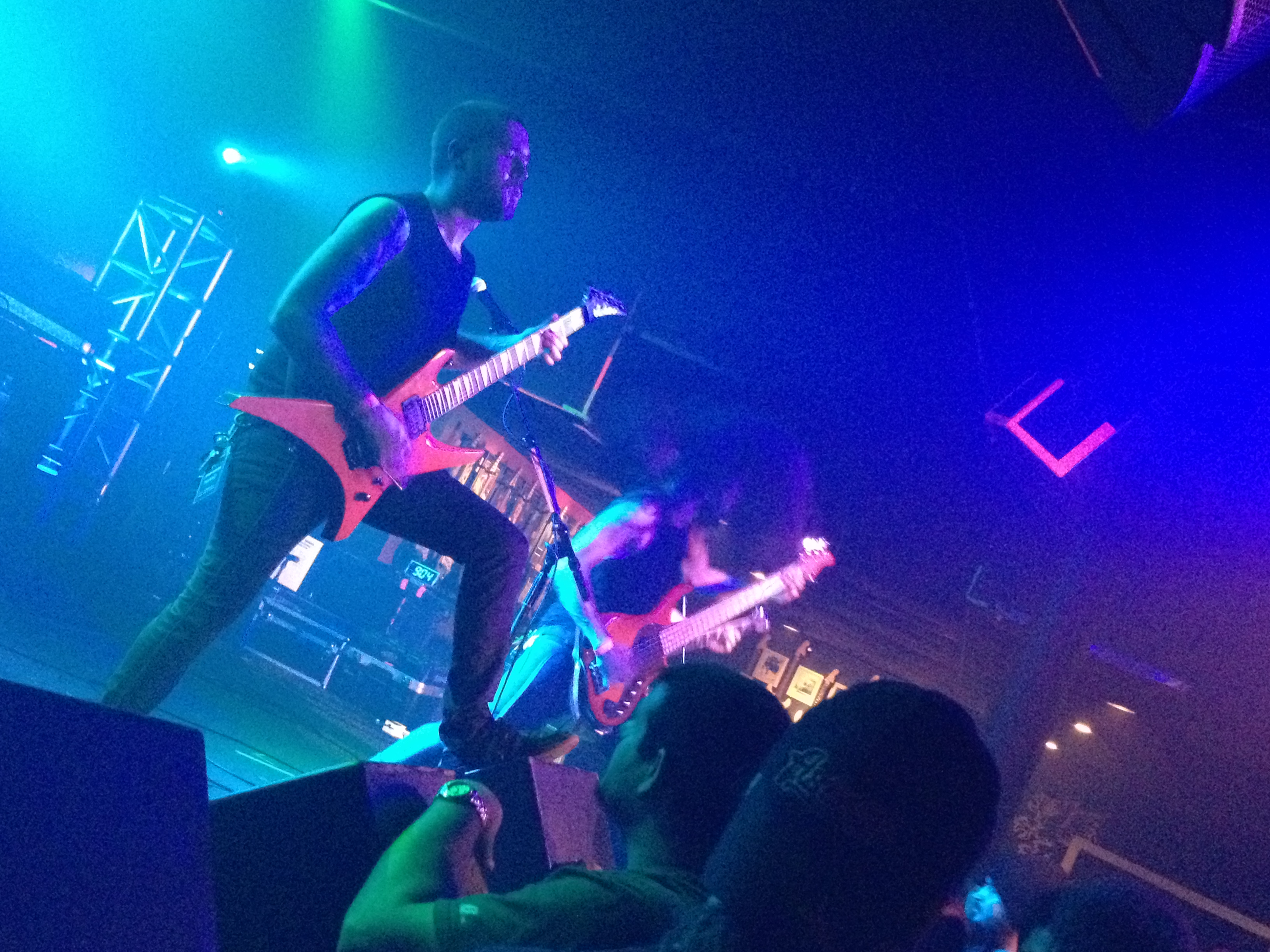 Considering the long drive and my meandering flashback cruise, my timing was perfect as I walked in right as Revocation began their set. This is the third time I’ve seen them this year, and every time, I’m impressed. I’m not sure why I don’t listen to them more often, but that is going to change. Their prog-leaning death metal is unique, and they put on an engaging show. I’ve learned to look forward to the introduction of “Conjuring the Catacylsm”, which varies oh so slightly each time. The gist: you are supposed to envision that you are summoning demons for an army, and there are some female ones that come along and give handjobs. It’s kind of an awkward scenario for me, but whatever. 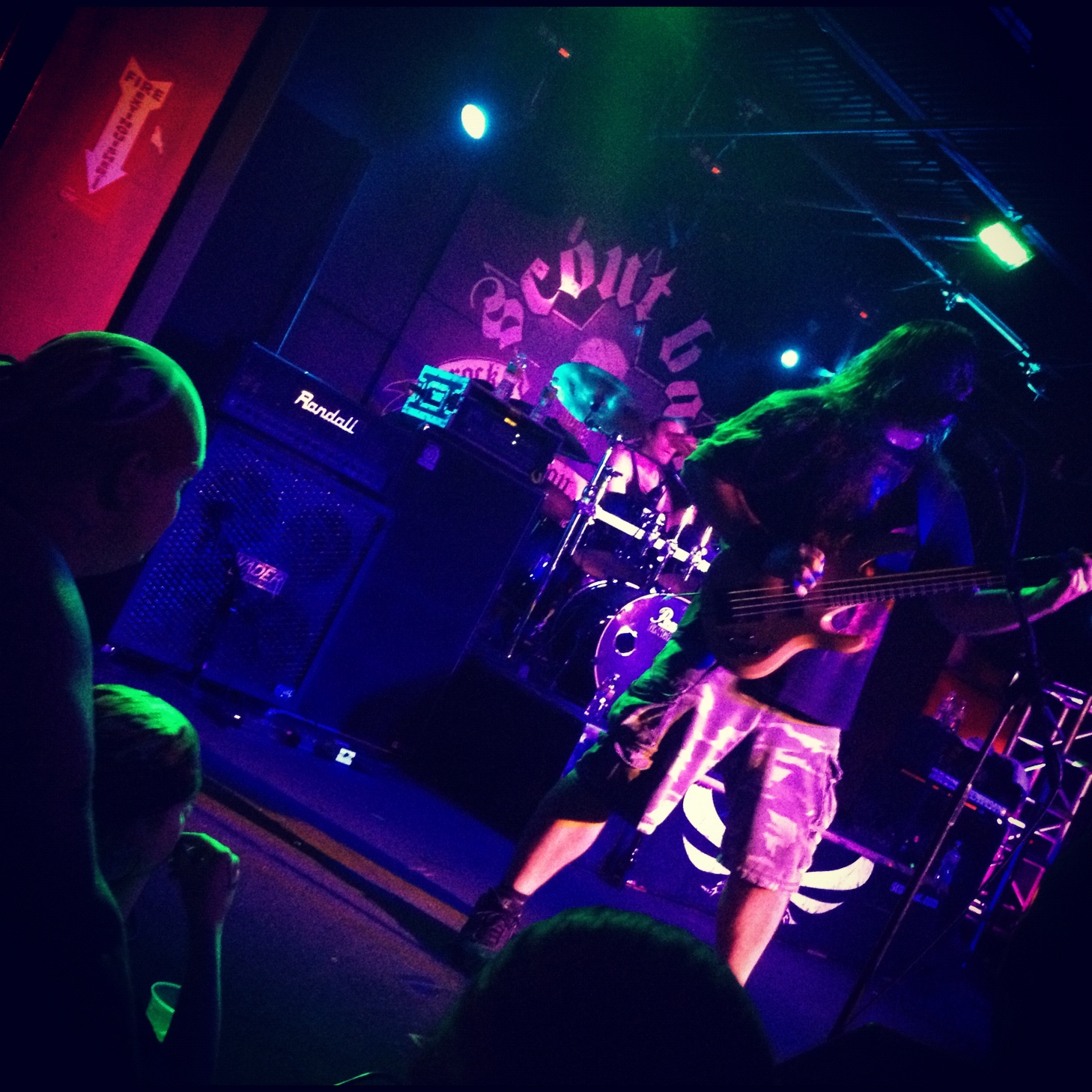 It had been a long time since I’d seen classic death metal trio Dying Fetus. I was standing there thinking about how the band name fit with my experiences in my own homeland that day…and it just so happened that I was standing next to a father and his probably 9 or 10 year old son rocking out. Dying Fetus were a perfect opener for Six Feet Under; similarly, once you get beyond the cacophonous sounds of the guitars and growls, there is a groove to fall into. And perhaps it was this that prompted a stripper type to jump onstage and start grinding around before setting sail over the crowd with the many other surfers that evening.

Awaiting Six Feet Under to take the stage, I had the usual conversation with a couple of well meaning guys who probably thought it odd that a girl was here by herself, especially one that had driven across the state for this show. These conversations evolved around frontman Chris Barnes’ iconic status within the genre, not only for his music, but also as a proponent for legalizing marijuana. I love listening to fanboys geek out, and it’s fun to watch how the moment the show begins, all efforts to attempt to chat up a girl are transferred into the swirling, cathartic chaos of the pit. 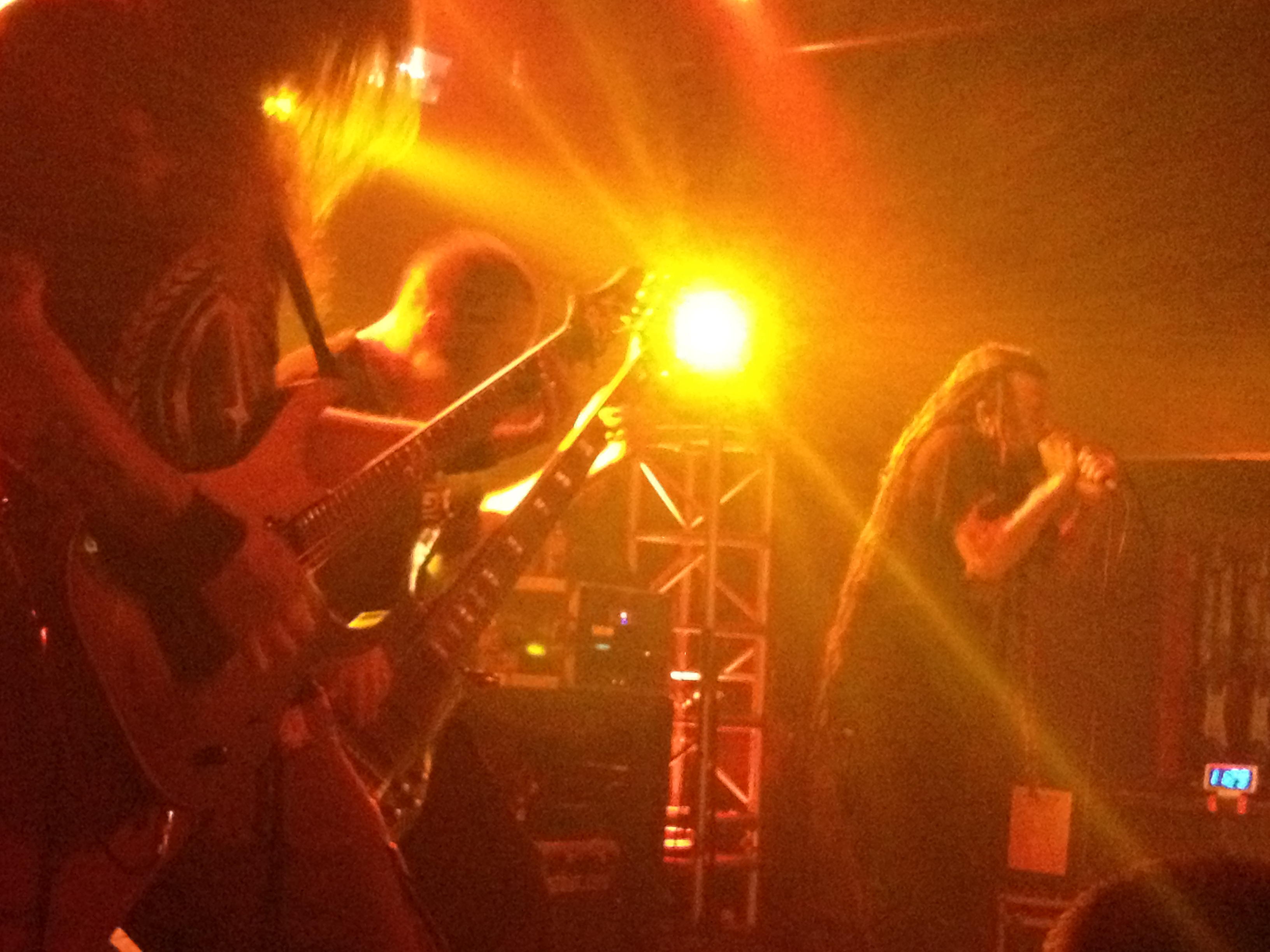 Listening to the original growler is hearing evil in it’s purest form; everything else sounds like a duped tape losing character along the way. His screeches, when experienced live, cause a physical reflex in me of a whistle being blown, making me go rigid at times. The musical embodiment of anger and despair, the grooves in this death metal reach out and stab your repeatedly. The undercurrent of the music is so loud and consuming, it was fitting that NASA was down the street; it sounded like a rocket engine.

The Scout Bar’s stage is relatively small, but somehow the two guitarists and bassist are the perfect distance away from Barnes’ dreadlocked headbanging explosion. Like tentacles from a deadly giant squid, the spectacle trumps any lighting show that could have served them as accompaniment. As evil as it all was, all the musicians catered to that little boy at the side of the stage from time to time, showing the lightness in the dark.

Apparently SFU had been busted by the cops around El Paso for weed, and this provided an ample launchpad for some pro-legalization rhetoric. West Texas is like the Bermuda Triangle for musicians…be it drug busts, detainment for some sort of legalese, or breakdowns…that place sucks them in and gives them the coal in the stocking equivalent of a welcome or parting gift from the TX. 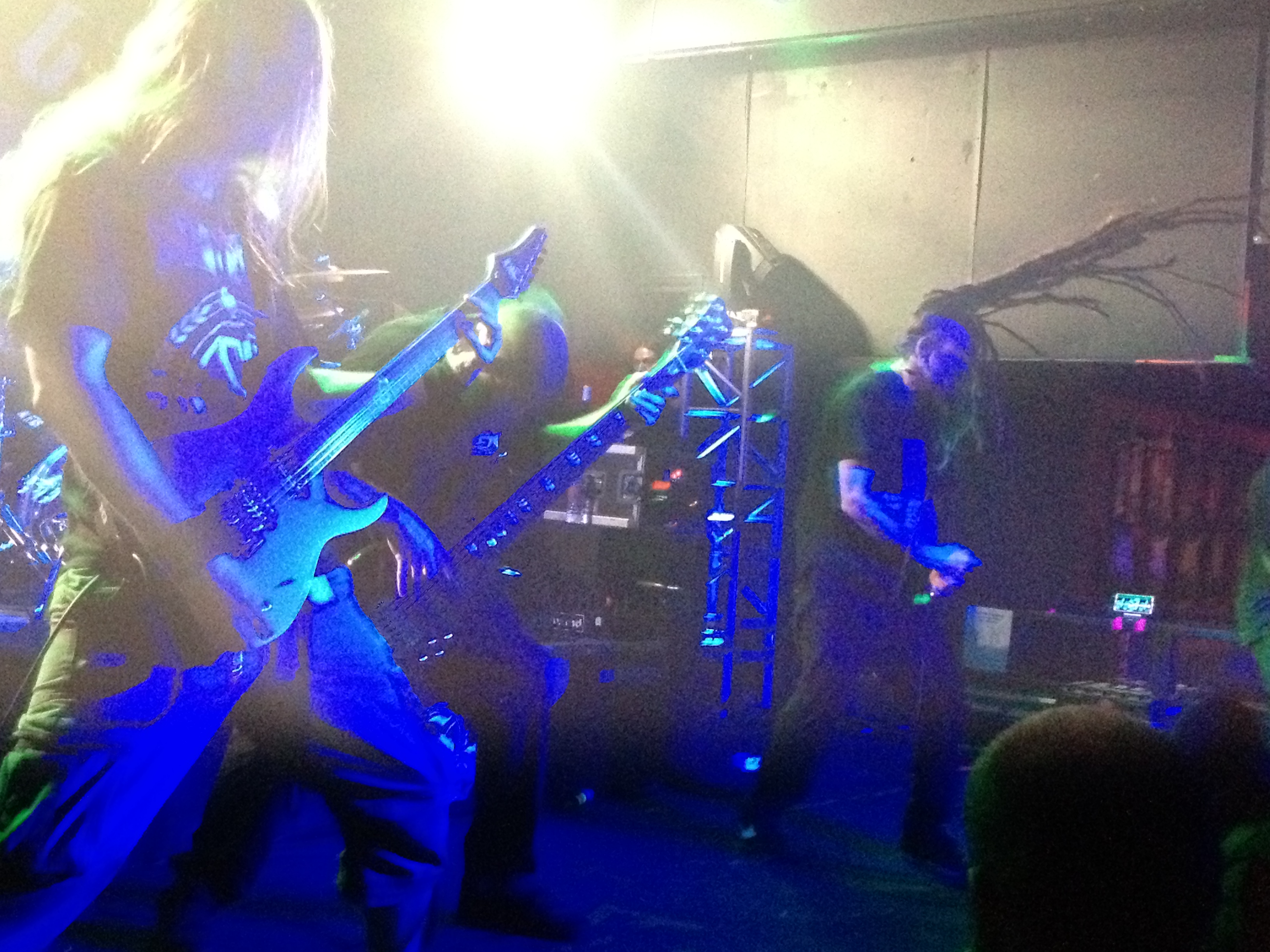 The setlist bounced around throughout SFU’s career, including Barnes-era Cannibal Corpse tracks “Hammer Smashed Face” towards the beginning and “Stripped, Raped, and Strangled” at the end. Tracks of the recently released album Undead sounded great tonight, but the highlight for me was probably “Seed of Filth”. After being at such a huge, mainstream festival the past weekend, it felt extra good to be back in the smelly, hot, dark depths of a small, intimate venue.

As they closed the set with “Stripped”, a guy jumped onstage and I’m not sure what happened, but he pissed off Barnes badly. He pushed the guy offstage, and the intruder came around the venue towards the exit where I was and sort of hid behind me. Barnes had kept an eye on him, and promptly came over to that side of the stage, picked up a a cup or beer can, and threw it at the guy, right past my head. I’m glad he has good aim or else I would have been nailed. Barnes proceeded to give the guy the middle finger as he screamed: 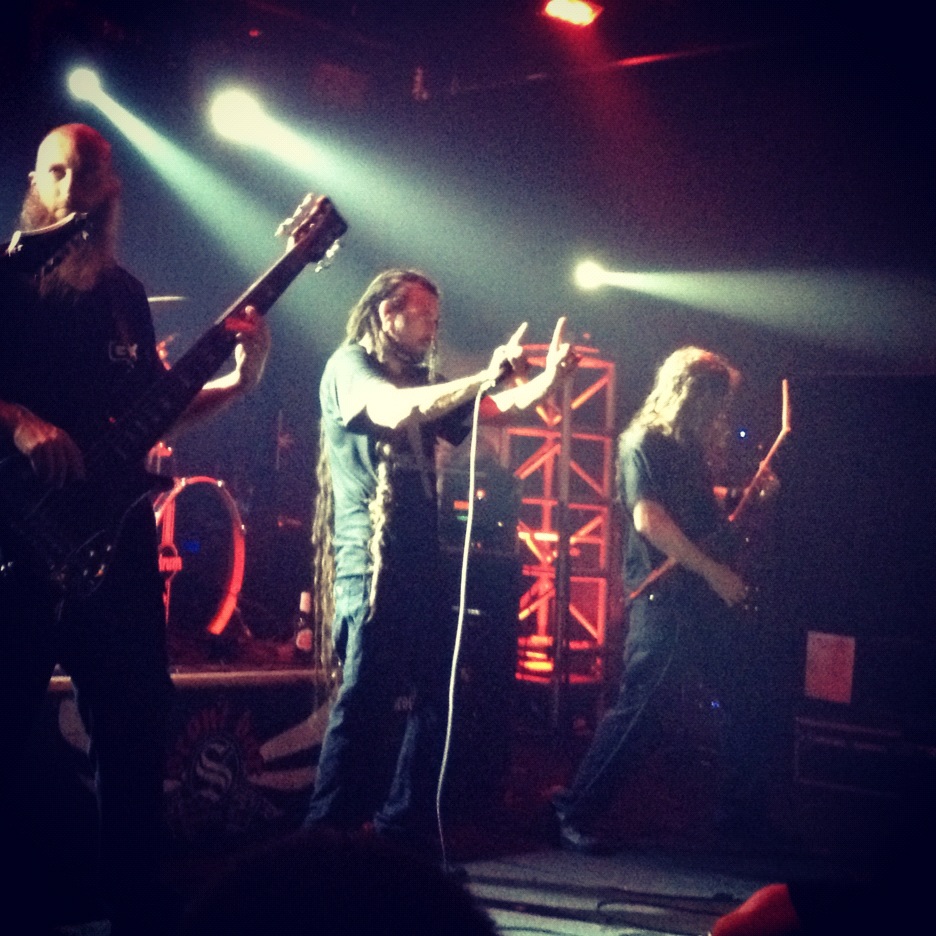 “They think they know who I am
All they know is I love to kill
Face down, dead on the ground
Find me before another is found

She was so beautiful
I had to kill her.”

As the song ended, I slipped out of the venue and back into the unknown.