Well, you come in baby,
you will get burned.
Because I am just what I am, I’ve learned.
I slowly become some “why” that you live with.
And mama told you that you would get this.
Hey, I lost you when you took me in, my friend
Now against my will, I still stay out.

It wasn’t until I was ‘home’ for 48 hours that I realized something was really wrong.

There have been times in my life where I’ve thought, ‘wow, I’m depressed’, or ‘maybe I need therapy’ or something like that. But really when I look back they were all pretty minor bumps in the road. I woke up Sunday morning and looked around and realized that after two months of telling myself, ‘I’m ok’….I’m really not. I’m normally a person that really has her shit together, but I’ve spent so much time running this past month or so that everything is starting to unravel. I can’t unpack my suitcase, I forgot to pay the one bill that I have, I can’t write the thank you notes for everything everyone did for me for the funeral. As I laid there, I thought about how poorly I was taking care of myself, how I keep trying to be in love to replace the feeling of emptiness even though it’s not the right time, how I can’t bring myself to do the simplest of tasks but can sit here and write 1000 words about a band…

So I went outside and sat by my mom’s grave and told her everything.

I still have a long, lonely road to recovery ahead of me. I hate that as the shock and relief fades into grief and sorrow it has to be the holidays, which I hate enough already. I thought about how she’d laugh at the stories and tell me what an exciting life I have. I remembered how she looked at me a few days before she died when I asked her if she was proud of me, even though I never got married or had kids, and how her response was, “Of course I am! People may think you’re kind of weird but I know you’re just a normal girl”.

As I walked back to the house, I knew I needed something comforting. And that would be the one thing that has always been and will always be there for me- music.

La Zona Rosa is one of my favorite venues, but I rarely get to go there. It’s a weird space- an L shaped garage- but the sound is great, the stage is great, the people who work there are great. It’s decidedly Austin with out being too in your face about it.

Hopewell opened the show. A five piece from New York, they served as a fantastic fit as a opener for The Dandy Warhols. Fuzzy guitar, keys, occasional tribal drumming, dreamy vocals…I wallowed in it all. The vocalist sounded a lot like one of the guys from The Rapture. As a band, they don’t look the most cohesive, but each one was so into their role that it didn’t really matter. At the end of the set, the vocalist kicked over part of the drum kit and then threw his guitar at the drummer, who didn’t seem to be expecting it, so it hit something before being rescued by him. Good thing the axe looked a little beat up anyway. 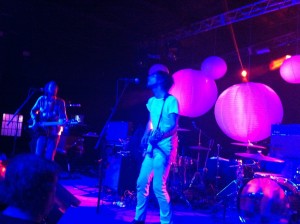 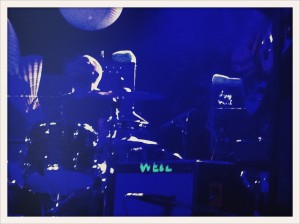 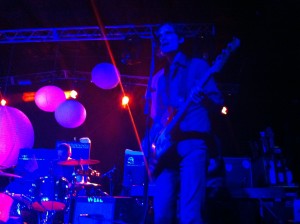 It had been over two years since I’d last seen The Dandy Warhols. I’ve see over 200 shows between now and then, and they had slowly slipped off my regular iPod rotation. But about one minute into the first song, I remembered how much I love them.

One of my all time favorite records is The Beach Boy’s Pet Sounds. The Dandy Warhols’ sound is a modern version of this in my opinion; there are these happy/poppy elements coupled with an eerie tone. It’s the sound of someone who’s seen dark places but doesn’t live there anymore.

I was standing in front of guitarist Peter HolmstrÃ¶m in all his rock ‘n roll fervor (who appears to wear the same skull ring on the same finger as me), a stark contrast to Courtney Taylor-Taylor’s laid back Pacific Northwest style, which was even more of a contrast to the button up shirt and tie wearing Brent de Boer. And then there was Zia McCabe, of course, who I would like to trade places with, just for one show.

Starting with the easy rocker ‘Be In’, I was reminded of the effortless flawlessness of the band. How the whole crowd goes into a zone, even though we all appear to be from vastly different walks of life. ‘We Used To Be Friends’ has the audience clapping along, and CTT does a little jump to finish it at the end. ‘Junkie’ makes me think about the friends I’ve lost, how the last 3 guys I’ve been involved with have been recovering heroin addicts. I guess I have a type.

‘You Were The Last High’ is one of their best songs. It’s a bit controversial what it’s actually about, but I have my own meaning for it and really connected with it this night. There was a point in the set here where I believe Zia and Brent each had to take bathroom breaks. So we helped sing ‘Everyday Should Be a Holiday’ while they took a break. Apparently they’d had a rough night…coining the phrase ‘Texas Wrecks Us’, which they promised would be a song on the next album.

‘You Come In Burned’ is one of those songs that discombobulates as it progresses, which is to me part of the beauty of psychedelic rock. It makes you feel like you’re on drugs even when you aren’t. It’s one of my favorite songs of theirs. As each player worked their own part, you could see the four different zones that make this track so multi-layered. 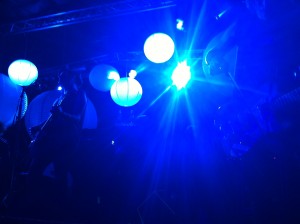 ‘The New Country’ was another one of my favorite moments of the evening. My focus was somewhere else (the set was pretty strobe-tastic), before I looked in front of me and realized HolmstrÃ¶m was bowing the guitar. This immediately takes me to Jimmy Page fantasy land, and I think I may have drooled a bit as I watched him play. 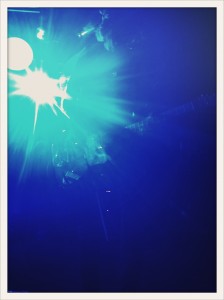 ‘Good Morning’ is another one of my favorites. When it began, you could hear an echo of sighs across the room- I was not alone in my sentiment. It’s really about the haunting vocal harmony here for me.

My eyes were on the beautiful Gibson set out for HolmstrÃ¶m, but I started to giggle when a very metal looking confederate flag print guitar was handed to CTT along with a matching shirt. He performed ‘Trucker’ in this, explaining it’s Texas roots. ‘Horse Pills’ had Zia out dancing much to the crowd’s delight. ‘Bohemian Like You’, their most commercially successful song, is catchy yet so shallow compared to their other songs. On ‘Godless’, I watched HolmstrÃ¶m use the e-bow to make those amazing sounds on the guitar. 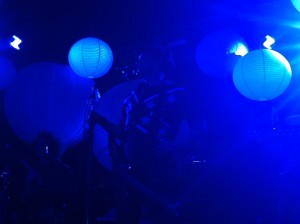 A request was taken from the audience- someone kept shouting for it all night- and Zia got the band to agree to do it. ‘White Gold’ is apparently about their first visit to Austin, where they ended up at some old school record producer’s house where there were piles of coke and handguns. It was amusing that Austin has had such an impact on the band- they reminisced how their last time playing at La Zona Rosa they were dressed as the Wizard of Oz. At first I thought it was pandering to the crowd, but by the end of the night, which was the final show of the tour, Zia remarked that this was her personal favorite, the other top two being Chicago and NYC, which the rest of the band agreed on (except for CTT, who substituted Asheville for Chicago).

As the last bits of fuzzy guitar echoed through the venue, the band left the stage, seemingly happy to have ended their tour on such a high note. The crowd was definitely happy; me included. I got sucked into this set in a different way than I have in a while, partially due to the environment, the emotional purging done earlier that day, but mostly due to the band.

And I left with goodies 🙂 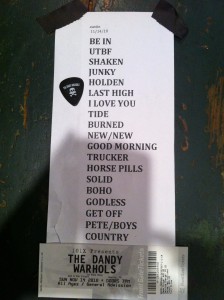