The Time to Kill is Now: Summer Slaughter- Cannibal Corpse, Between the Buried and Me, The Faceless, Periphery, Veil of Maya, Job for a Cowboy, and Goatwhore @ White Rabbit, 7/27/12

It began as one of those days where I couldn’t bear to hear another piece of bad news; every ding of a text, ring of a call, or chime for an email led to a disappointment. And on top of that, In two days time I’ll be doing the most goth thing I’ve ever done: put myself through a second funeral of sorts for my mom by throwing a gathering in her memory for what would have been her 60th birthday.

But instead of retreating into a dark room of solitary confinement for the 5th night in a row, I instead found myself walking into a dark, hot room packed full of people at the early hour of 5pm.

I’d been looking forward to this tour for months; I think this is the first time I’ve ever been able to attend Summer Slaughter. But Cannibal Corpse was headlining; and that’s a band I see pretty much once a year like clockwork…and it’s something I very much look forward to. However, as I read the initial press release, I said to myself, “PLEASE don’t let this be at the White Rabbit” while scanning the dates…and of course, it was. Late July Texas heat + extreme metal in there would be like a pressure cooker. And it was. 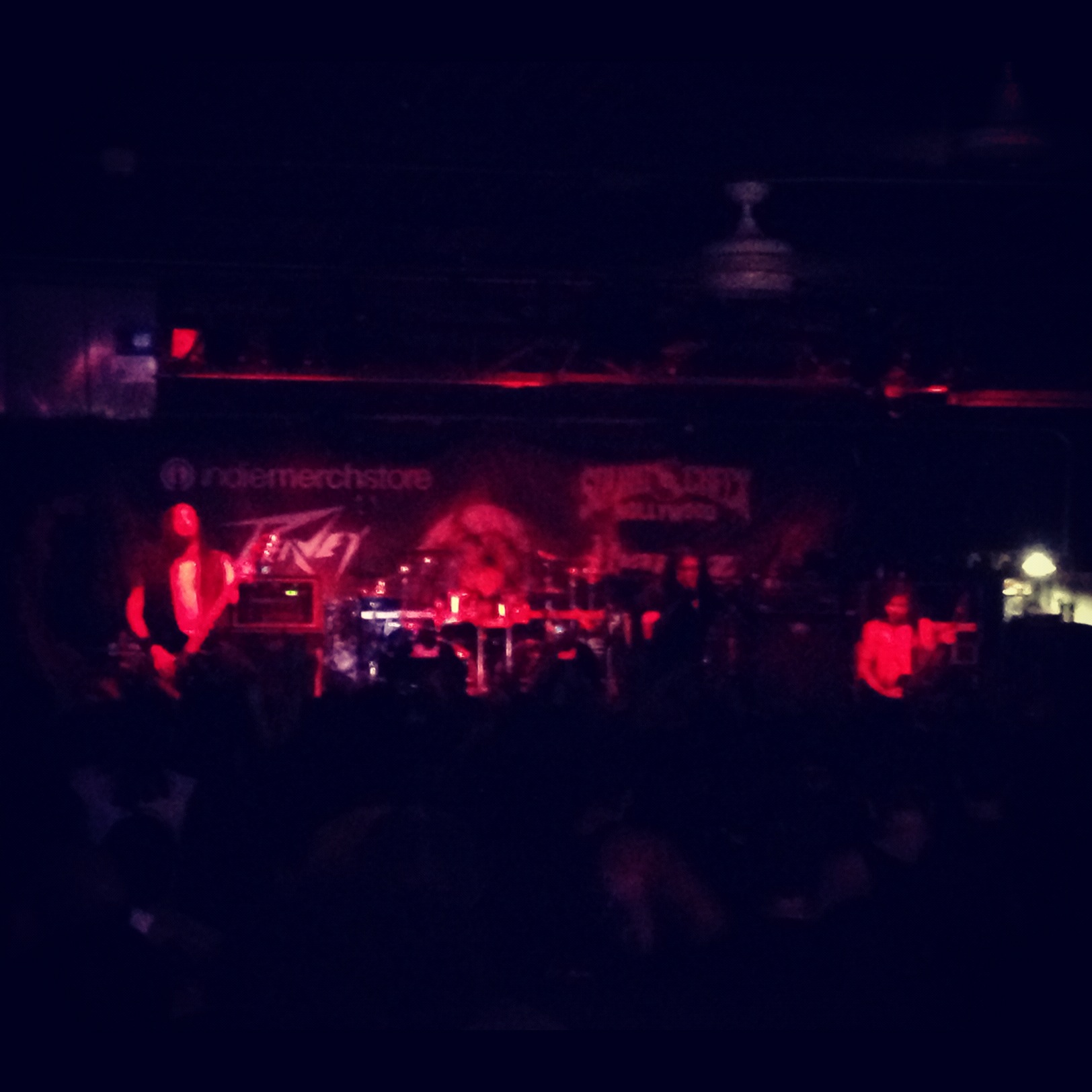 I walked in just as Goatwhore began, who was one of the bands I most wanted to see. I think this was my sixth time seeing them– they are one of my favorite newer bands. I was pretty shocked how packed the venue was already at such an early hour, so instead of moving closer I watched them from the farthest away I ever had. Ben Falgoust’s command over the audience is always impressive, and paired with Sammy Duet’s grooving riffs the band’s unique southern black metal sound captivated the audience. Since I was back with the crowd that was probably wondering what kind of band would call themselves Goatwhore, I had no less that two guys completely turn around and stare at me when I would raise my fist and scream along to the words. 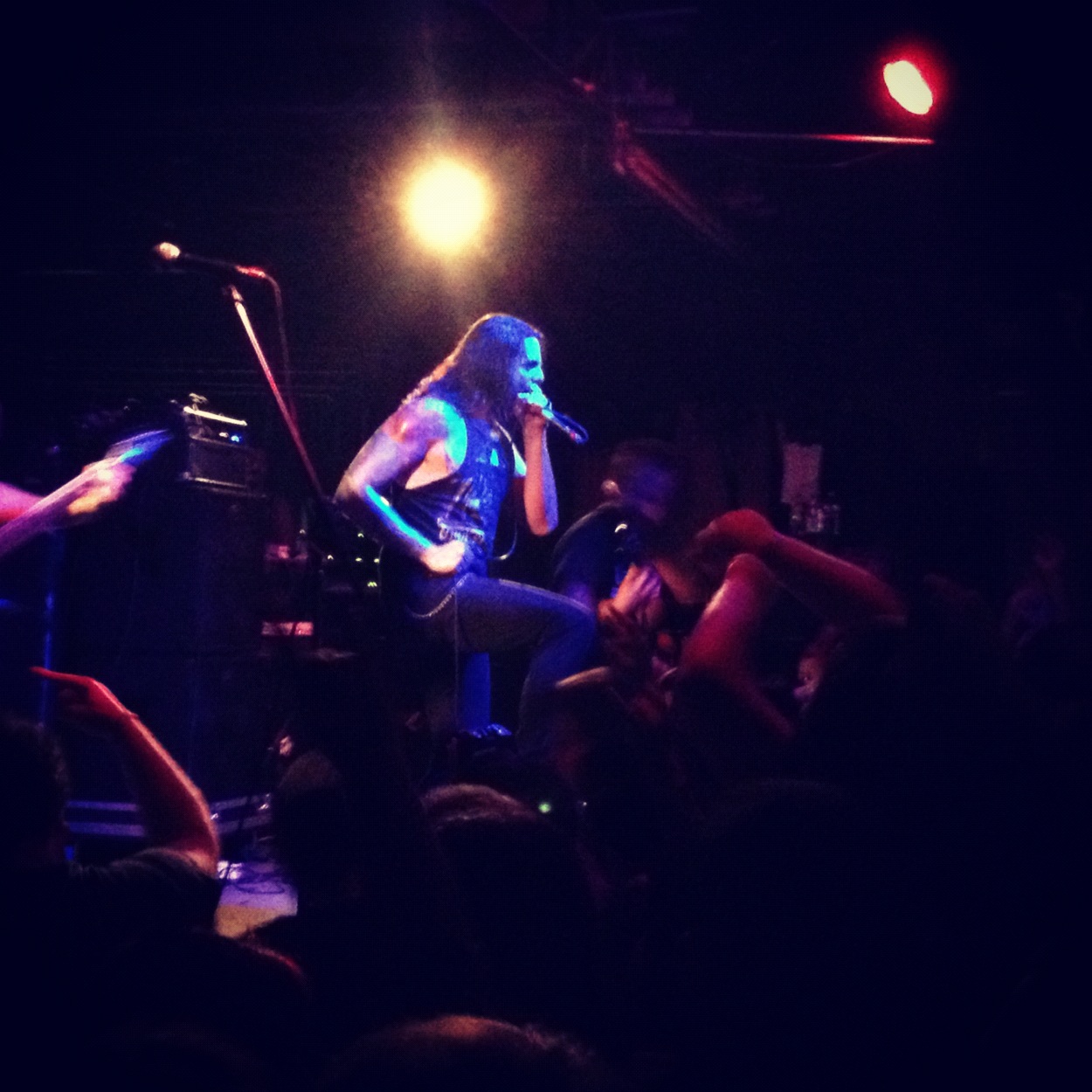 I was interested in seeing Job For A Cowboy again because it had been almost 3 years since I last saw them, opening for GWAR. I’ve always been a little mixed on them….but this ended up being the surprise entertaining set of the night. From the first note to the last note, their set had the craziest crowd. Frontman Jonny Davy had to not only perform vocal duties, but he was also security for the set, helping no less than 50 stage infiltrators land safely on the stage. I couldn’t help but think about the Randy Blythe situation while watching this go down. Being that this is summer break, many of these were fearless, inexperienced kids in their mid teens…and I’m pretty sure I gasped a few times when I saw some of them bend in odd ways before flopping onto the stage with Jonny’s cradling assistance. I’m getting a mommy complex without even having kids. But at the same time, the vibe in there was perfect….this was, indeed, Summer Slaughter. Everything was on the verge of become a catastrophy; which is often a fun space to play in.

The next four bands would occupy the progressive/melodic metal space, a genre I have a deep love/hate relationship with. Dillinger Escape Plan = love…..Cynic = not love. The following four bands I had very little opinion about, but on that particular night I wasn’t really in the mood for any esoteric progressive stuff. You see, to me, metal is kind of like sex: sometimes you want it long and drawn out and emotionally complex, and other times you want it straightforward, hard and fast. I was in the mood for the latter. Veil of Maya and Periphery each had one or two songs that grabbed my attention that were on the heavier end, but other than that I watched the guys around me geek out. I remember giant water guns brought out during the Veil of Maya set, and that Periphery were pissed enough about the blue snow cones outside being coconut and not blue raspberry that they spent a good minute bitching about it. I’ve seen The Faceless quite a bit over the years. I recall that they played a song off of their upcoming album that was very new Opeth sounding. There were a lot of clean vocals sang by Michael Keene and it completely ducked out of the metal genre for the majority of the song. The crowd was very “huh?” about it, but ultimately it intrigued me to listen once it’s released. It had been ages since I’d seen Between the Buried and Me; I forgot how weird some of their songs get. The last time I saw guitarist Paul Waggoner, he was playing with Lamb of God…and I saw them at LoG’s last U.S. show. At some point during one of these sets, I started getting tunnel vision and feeling weird, which I know means I’m about to faint, so I had to go outside and down a bottle of water for fear of having to miss the headliner. And there was NO WAY I was doing that.

I had been pretty impressed with the crowd being infinitely more likeable than Mayhem Fest earlier this month. This was a solo show for me, and usually that really invites the creepers…but the one kid that asked for my number was actually pretty respectful. Even though I had lost my sea legs nary an hour before, I approached the stage for Cannibal Corpse. I will probably die at a concert, that would be my preferred way to go. 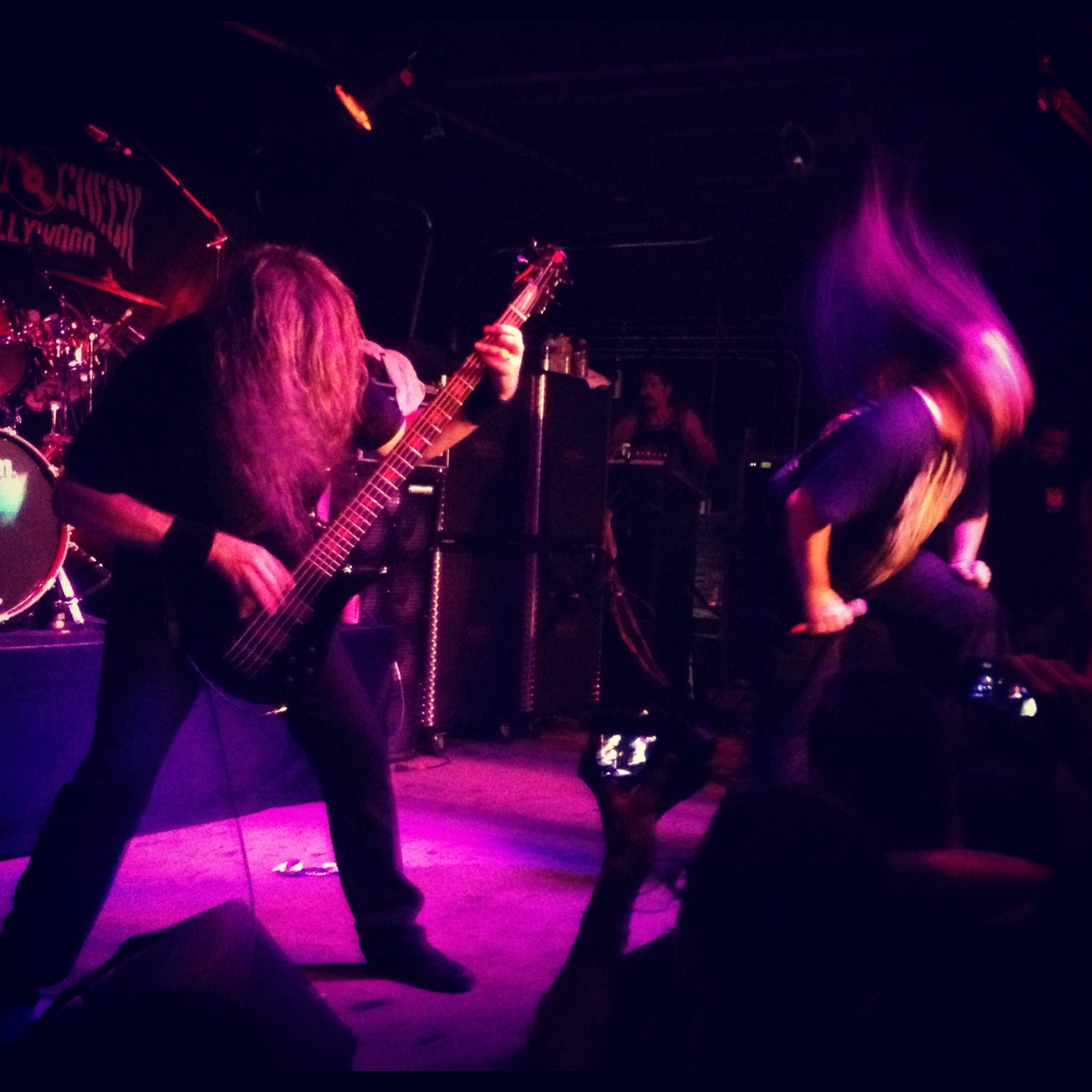 You know you’ve seen Cannibal a lot when you can scream along to Corpsegrinder’s introductions to songs. On this night, you could tell the band was enjoying the back to basics venue and feeding off the fans being right in their faces…though Corpsegrinder did send death threats out to someone who stole his water. By this point, for the first time EVER I saw actual security grabbing people who landed on stage. “Evisceration Plague” is my favorite newer Cannibal song, and it was wildly cathartic to whip my hair around to the heaviness of that song, and scream “I’ve lost control!!”. Corpsegrinder’s vocals on “I Cum Blood” sounded like a clogged drain of death, which creates the perfect disgusting visual for one of their most gut-wrenching songs. This time around, it was “Priests of Sodom” that was dedicated to the ladies instead of the usual “Fucked With A Knife”. What made the usual ladies dedication especially wonderful this evening was that suddenly it was all female crowdsurfers…one who landed on stage at least 5 times. I was this close to saying “fuck it” and jumping on that stage myself…but I’m getting old. But I was proud of those girls. 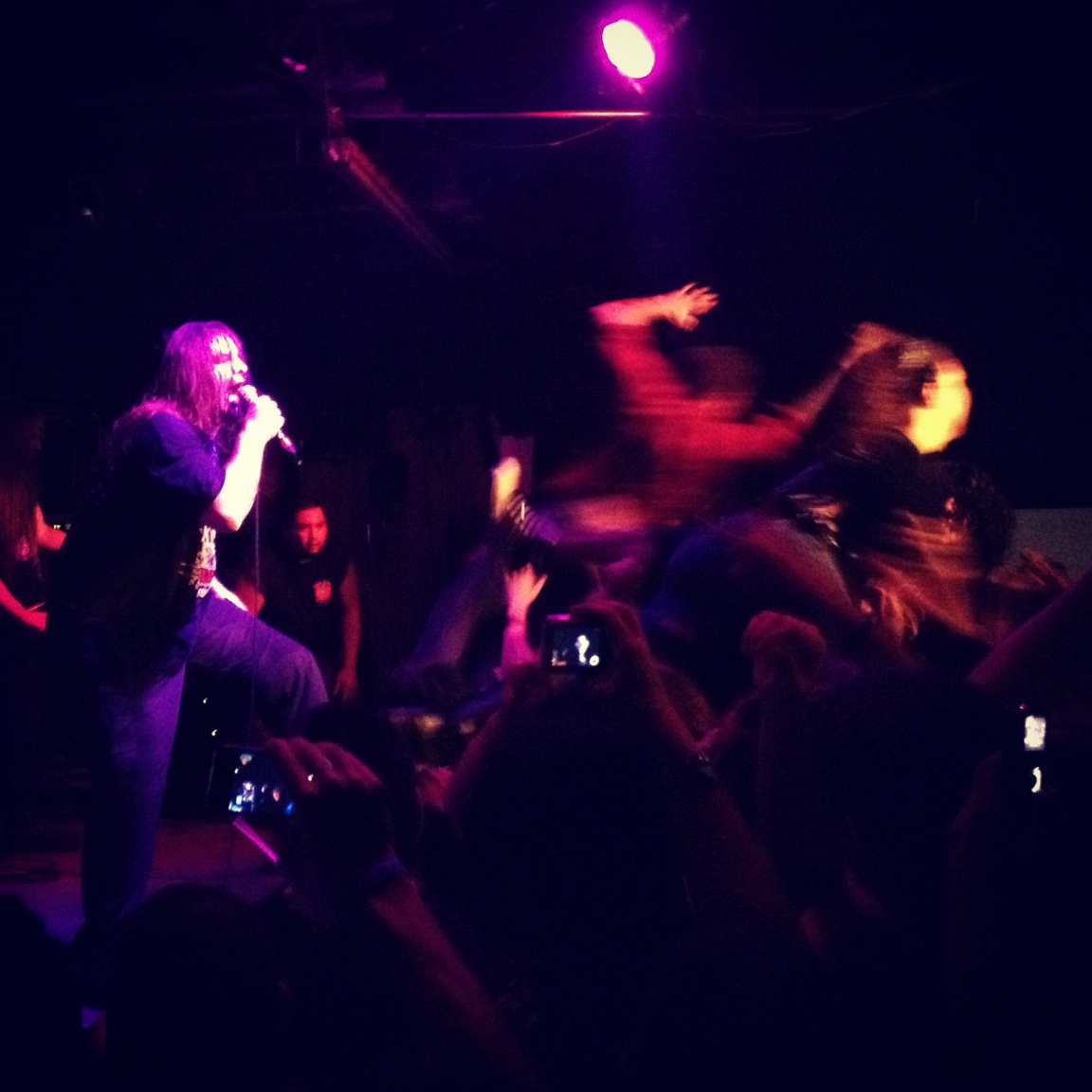 I was starting to go deaf in my left ear…so I backed up for the finale of “Hammer Smashed Face” and “Stripped, Raped and Strangled”. The riff in Hammer is one of my favorites in metal songs. But it’s “Stripped, Raped and Strangled that is my most played Cannibal track, and, admittedly, the one song that I know every single word to. I spent every last bit of energy screaming along, claws raised, “THEY THINK THEY KNOW WHO I AM…ALL THEY KNOW IS I LOVE TO KILL…FACE DOWN DEAD ON THE GROUND….FIND ME BEFORE ANOTHER IS FOUND…I COME ALIVE IN THE DARKNESS…” And so on an so forth, until the song ended and I felt like, for about three and a half minutes, I could completely lose my grip on reality.

Side note: how to make a merch dude uncomfortable: buy panties. 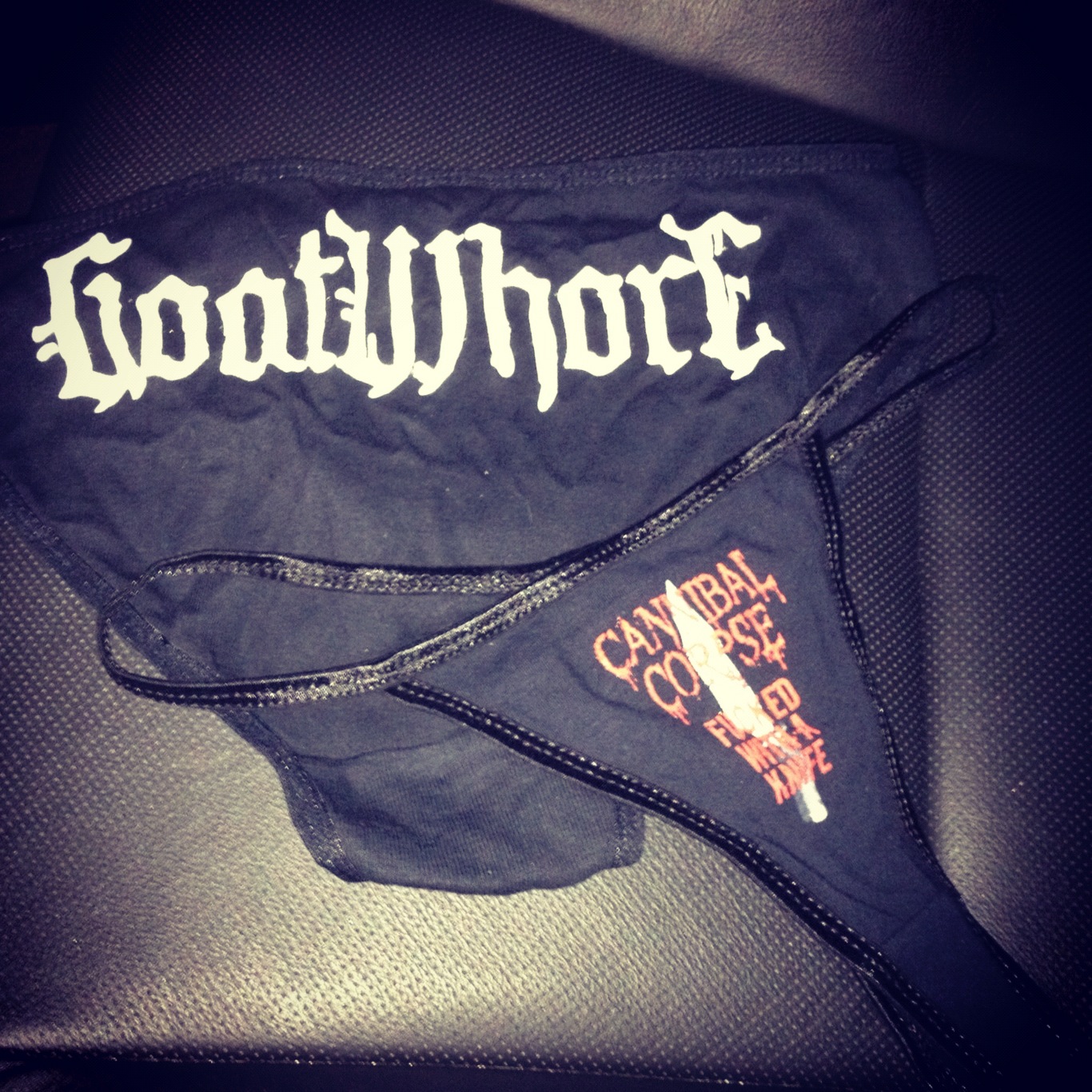