The day started off with an interview and much glaring at the additional people in green descending upon downtown Austin to celebrate St. Patrick’s day.

We made our way over to Emo’s, and as we joined the small line to get into the inside stage, I heard familiar notes wafting through the door.

Kvelertak were #1 on my list of about five bands that I HAD TO see at SXSW. My ears perked up, my eyes found the handwritten schedule by the door and sure enough, Kvelertak and The Funeral Pyre had switched set times.

I walked in as they were breaking down their equipment and my heart broke. I wanted to go hear the Norwegians in my little Texas venue before I go visit the land that made them in a few weeks….and I only had one more opportunity to catch them now.

It was Full Metal Texas, and the Emo’s patio was a who’s who of the small tightknit metal community to which I’m an outside observer. Luckily some of them are nice to me and I put some faces to names and then ran inside to catch The Funeral Pyre.

I’m pretty sure I’d seen them before, but it had been a while. I wallowed in my sadness with their heaviness serenading me, trying not to blame them for the schedule snafu. Then the crowd erupted and an unfitting borderline hardcore dancers’ pit broke out, leaving who I think was one of the Norwegians Caught in a Mosh with a guitar in hand. The only other thing I can remember from this set is the gutwrenching statements of the vocalist: 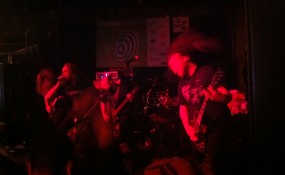 “If you have drugs give them to me after; if you think you have a reason to live, you don’t.”

Well…if so then shouldn’t I take my own drugs and not give them to you?

I spaced out for the rest of the set, and then it was off to the next thing.