I had seen The Click Clack Boom at last year’s SXSW and taken a liking to their lighter than what I’m usually into rock and roll. So when I saw how many shows they would be playing at this year’s fest, I made a point to catch one.

It was a rap/rock showcase at the Speakeasy….which was an odd fit for the band. Despite being to this bar many times in my college days, I had never entered through the front door and it felt like a completely foreign place. The band setting up on stage was definitely not who I had come to see, so I was afraid I had missed them but stayed put just in case.

I ended up watching Das Racist and another band. Das Racist had a lead singer who was dressed very hip hop except for a Poison shirt. And they played what ended up sounding remarkably like nu-metal versions of several rock songs…with the one that made me shake my head being ‘Man in the Box’. I was so confused. 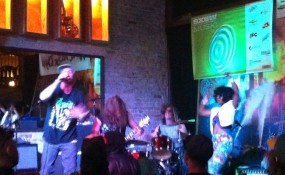 Luckily through twitter I was able to find out that the bands were just running late.

It was at this point that I started thinking of the theme ‘the spirit of rock ‘n roll’ and how it permeates downtown Austin during SXSW. Seeing TCCB set up and thinking about how many shows they’d be playing all over town that week- it just made me think about how SXSW is for real music fans. Unlike these big festivals where it’s more about being seen and saying you were there; here it is a lot of work to play and to see bands…you have to love it. And our presence there speaks to that love.

I’m standing there rocking out to CCB in what is normally a semi swanky bar thinking about the contrast to my last show an hour ago, and how awesome it is to be able to do that, for free! They laugh and they smile, even when there’s a drum mic issue that stops the show for a second. The set swells through the end as Nathanial presses his guitar to the speaker and the fuzz fills the room. 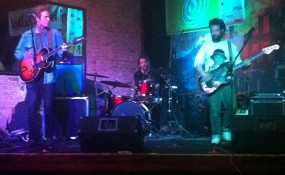 After their too short set, I spoke with them in person for the first time since keeping in touch online over the past year. What a group of nice, hard working guys. But those guys don’t need my help spreading the word….several major publications picked them as a band to watch!

Check out my interview with CCB here!