You never know how you truly feel about something until it’s gone.

I spent the past five months in LA trying to decide if I want to live there. To some people, it might seem easy to just move back to California. But I have certain unique considerations, namely, trying to be responsible to my family. Living in Texas is the life I’m supposed to lead, living in California has always been the life I want to lead. The problem lies in that, when I left Texas to pursue my own life, awful things started to happen back in Texas. So I relate the two together. I felt like I was punished for being selfish.

As I drove away from LA, I thought about my time there as a whole. I don’t believe that the city is my solution to happiness; but I do think that in my five months there I was happier than I’d been in a really long time. It wasn’t as big of a rollercoaster; a not so great show, a not so great date, some messed up plans…all this ended up being something to laugh about in the end. Even when I got my teeth knocked out.

I was not prepared for the way I would feel as I walked into my family home back in Texas. The looming sense of dread of the events that took place there last summer, mixed with the loss of my life in LA, were met with unexpected news. And that’s when I had a panic attack.

As I sat there and tried to calm myself down, all I could think of was ‘these are the moments that inspire great music’. Where your whole world shrinks and you get tunnel vision, and you only think in extremes. The faces of the people involved become grotesque. You feel like screaming, but you physically can’t…you see blurry and red….your limbs become numb, your heart races, and you lose your appetite. You can’t breathe, and you’re not sure you even want to, really. It’s the ultimate overreaction…but you know what? I. DON’T. CARE.

That night was a test of my willpower. There were a lot of things I wanted to do, but I laid there and I listened…and I listened….and I cried myself to sleep.

The next day, I collected myself to go to Austin. Despite the eyerollingly cheerfully named Fun Fun Fun Fest, I would have a day of music that matched the color of my soul in the most perfect way. This metal chick in distress was about to come face to face with the wailing despair of EyeHateGod, the violent gore of Cannibal Corpse, and the blasphemous rage of Slayer. 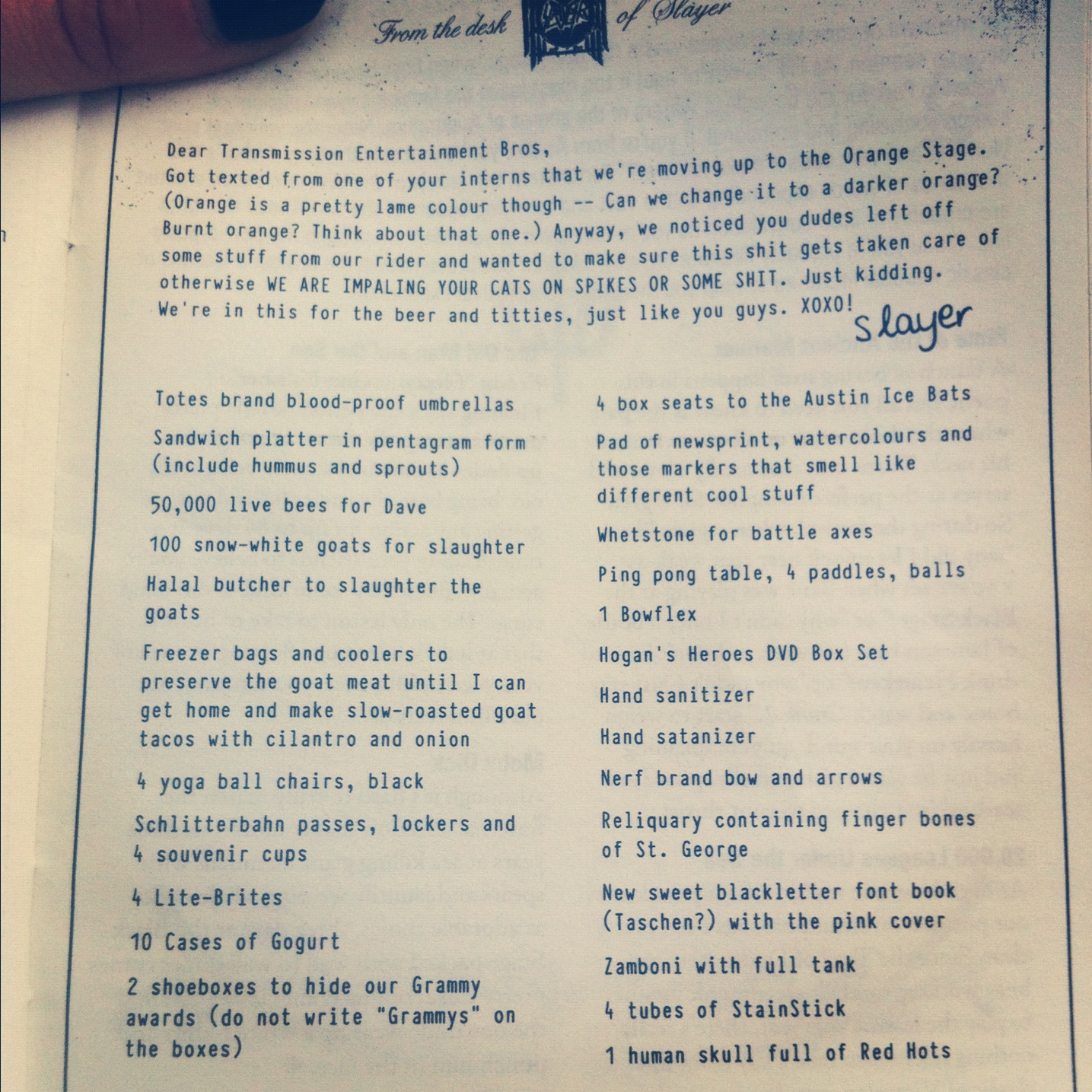 Read my review of the sets on GRAMMY.com.

Things that were prevalent at FFF Fest:

About halfway through my time at FFF, I remembered that this would probably be my last show for a while. It was during Cannibal Corpse, and I gripped the rail tight and yelled along to “Hammer Smashed Face” extra hard, and had one of those ‘how did I get here’ moments. 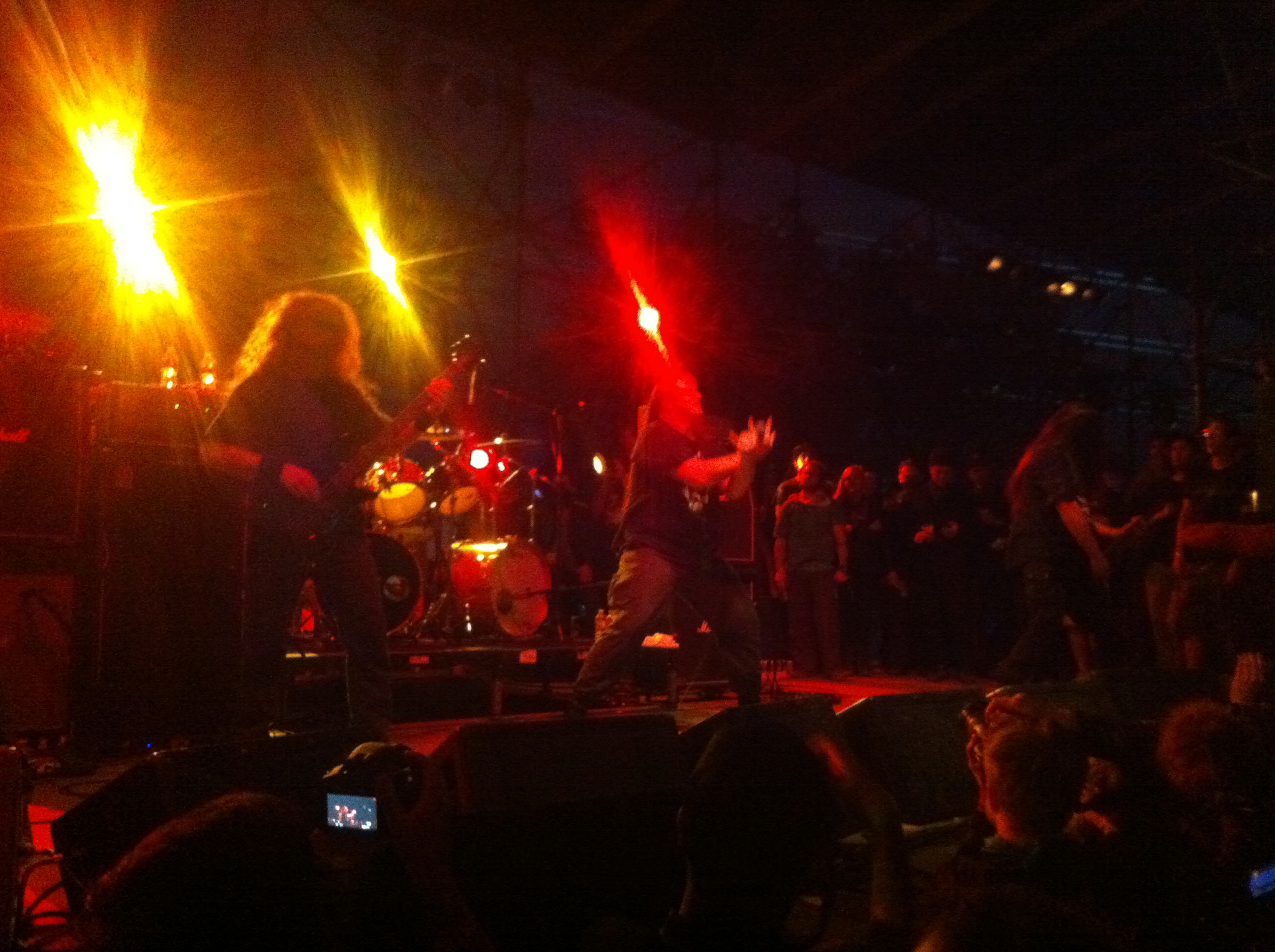 You see, I’m about to take off for a month of music-free travel. Cambodia, Thailand, Australia, New Zealand…it’s the final piece to my year of trying to find true happiness for myself. And when I’m finished with my adventure, I will sit down and write about how music and travel helped me through my darkest times, but not as HRC.

I was wondering when the time would come that I would start thinking about taking a break from HardRockChick. Oddly enough, it’s not that I’ve lost the desire to go to shows. I still love it. But there just comes a point when you’ve seen too much, most things have lost their luster, and even new stuff seems old. When you start recognizing the techs and the security, forgetting how many times you’ve seen a band but know it’s more than five, and you’ve become universally know by a sizable number of musicians as, “hey- you’re that girl who’s always in the front row!”…you might need a break. When you’ve made your blog your priority for five years and, though you’ve gained friends and memories that will last a lifetime (literally, all my thoughts, good or bad, have been broadcast for five years!); but turn down adult things like jobs that will make you money and dates that may lead to future happiness…you might need a break. When you can relate everything happening around you to a show you wrote about- example: I was actually at EHG’s last set in another city before this one, I saw GWAR at last year’s FFF and guitarist Cory Smoot just died, I also saw Mastodon’s set at last year’s FFF and I just saw them a few nights before, or that last time I saw Slayer, it was the day after my mother’s funeral…you might need a break. It’s been nearly 5 years and 500 musical adventures; if I conservatively estimate the amount of time spent at shows and writing about them and working on my site, I should be damn close to Gladwell’s 10,000 hour rule. Basically, it comes down to this: I want to get a little bit of the magic back, but mainly I want to be happy, and unfortunately other parts of my life have suffered at the expense of living as HRC. 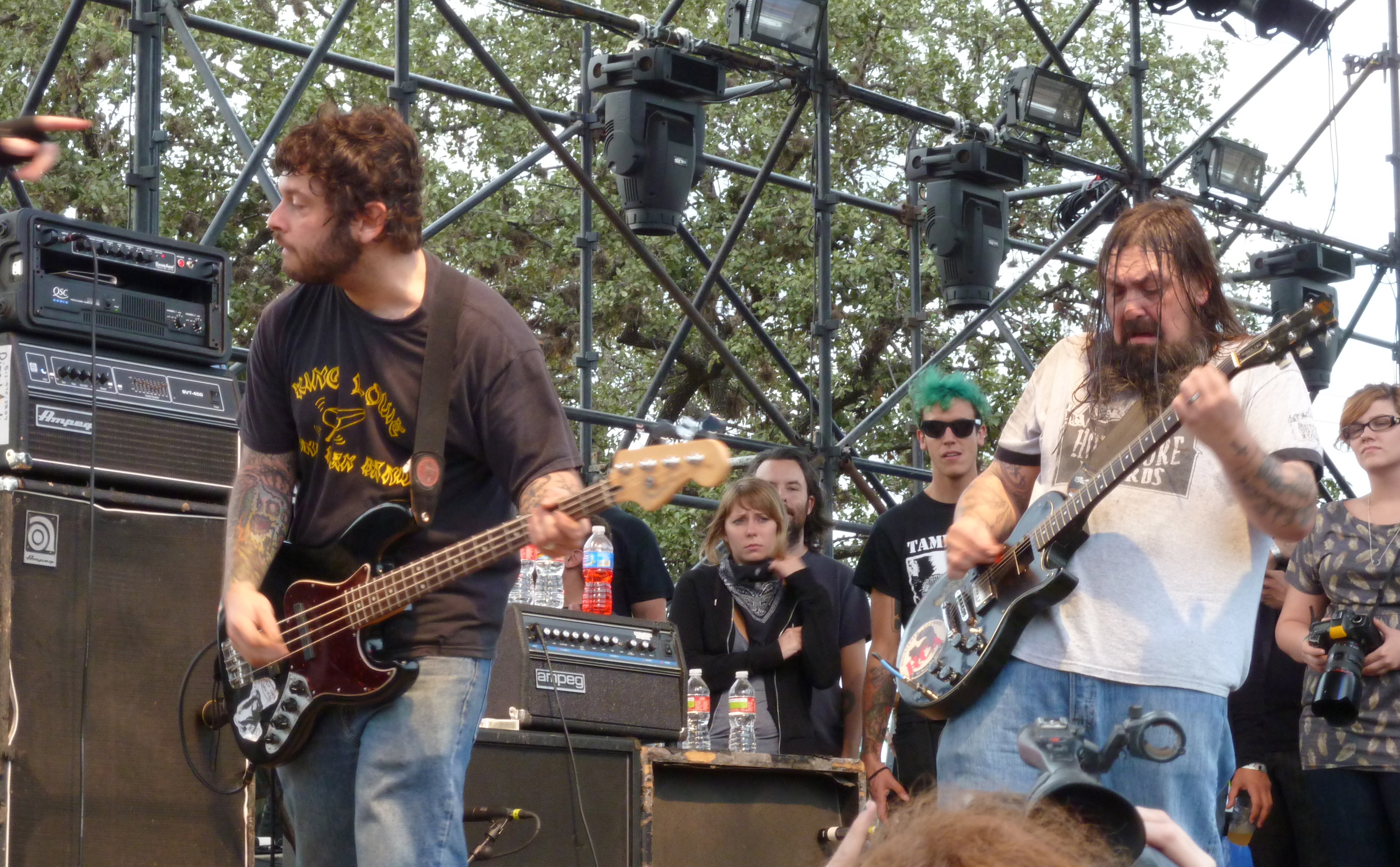 But for the most part, it’s been fucking FUN (FUN FUN)! After unsticking myself from the rail for Cannibal Corpse, I wandered over to see Boris gong-checking. I have never seen Boris before, but oddly enough, in the midst of my HRC photo shoot shortly before leaving Hollywood, my photographer and I unintentionally stopped at what happened to be the staircase leading to Southern Lord records, which the Boris crew happened to be using to load up to leave on this tour. See! There I go again. Anyway, about 2 songs into the set I realized that I did not want this to be my first Boris show, and caught up with friends instead and took a break. 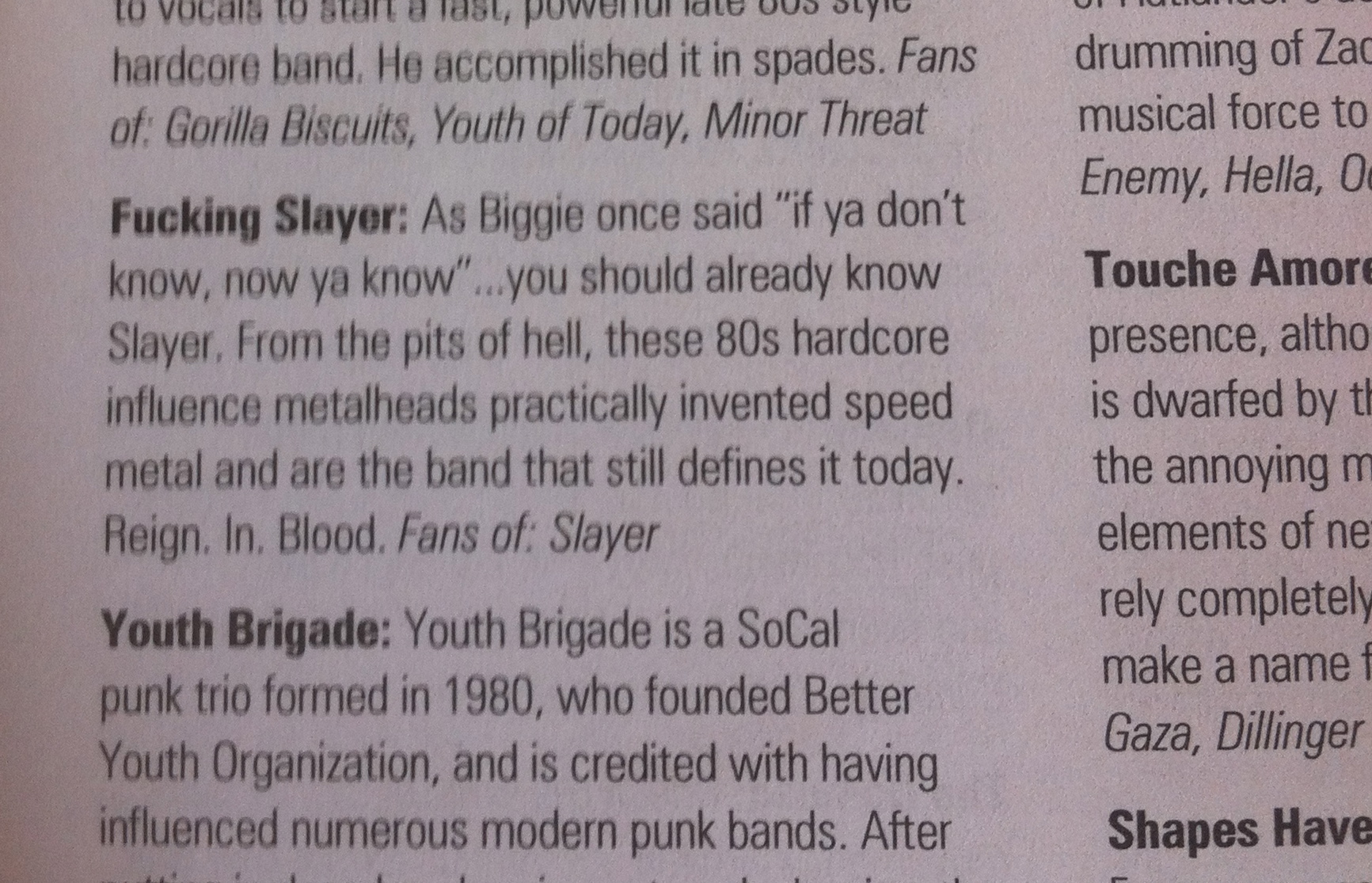 I wandered backstage, where the two usual benefits of being backstage were falsified (better restrooms, free booze). I did walk by Gary Holt, and watched a bit of Brian Posehn from behind the stage (best angle!). I didn’t want to watch Slayer from the side, though, so I wandered back out into the black masses.

I circled the crowd before finding a landing spot, and it was eerie to see everyone, weary from the weekend but staring longingly at the stage. It was during this time that I started feeling pretty sick. I held out as much as I could in a peripheral Slayer pit. I listened to the rest fade away as I walked very slowly back to my car. “Mandatory suicide…suicide….suicide“. 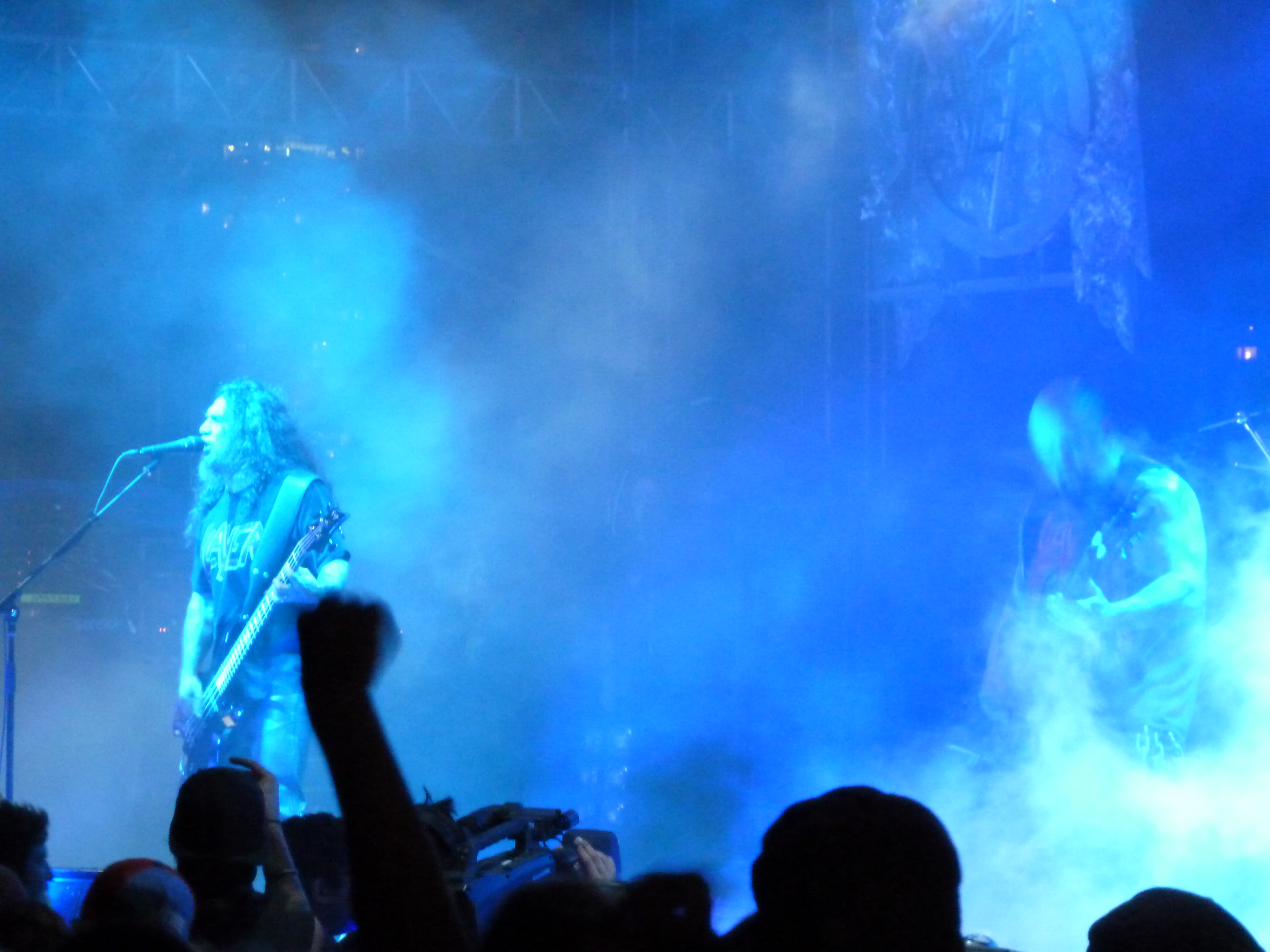 The word “jealous” has been said to me a lot over the past year or so. I can understand why, I’ve done some cool stuff. But the reality is that, after that part that makes you jealous, when the show is over, and after the long drive to wherever I happen to be pseudo-living at the moment, I close my eyes and dream about having a life more like your own. OK, maybe slightly more metal than your life, but still!

So I’m off to consult with monks and hobbits about the meaning of life in places far away from music venues. It’s kinda scary, but I’m hoping to emerge from all of this ready to live again.

As they say…see you on the other side…

“Torment, ill-forgotten
A soul that will never rest
Innocence withdrawn in fear
Fires burning, can you hear
Cries in the night” 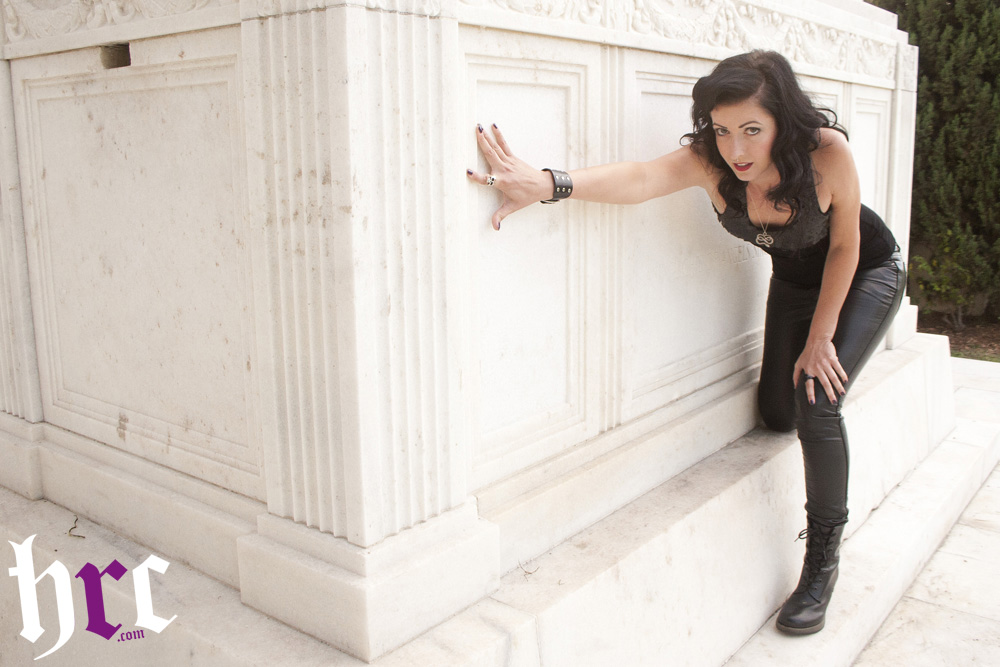