“Hear the music coming, loud as you can stand
You’ll never be the same again
Let the beat into you, let it turn you ’round
Let it be your best friend”

This was already heavily on my mind when I rolled into Austin and received the text message that Mike Starr had died. Now, this wasn’t surprising to any of us, really. But it was still a reminder, sad and tragic. 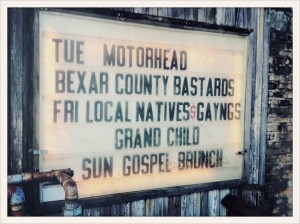 I was on my way to see MotÃ¶rhead, Clutch, and Valient Thorr play a BBQ joint in downtown Austin, and it was the night before my birthday. Now, I’ve reached the point where birthdays are just another day, but there is still something about them that applies pressure. After fretting a little about being alone, I didn’t hit traffic, found a spot around the corner from the venue, and waltzed right up to the guestlist and had my pass in seconds. What a sigh of relief…

My good luck continued….or perhaps it was my super awesome boots that everyone stops me about when I wear them: 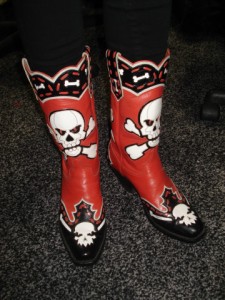 Everyone was just oddly nice to me…from the wristbander, to the guy who let me avoid using the awful port-o-potty to go inside and use a real restroom, where I bumped into one of the MotÃ¶rhead crew that I met at the Lemmy documentary premier back in January.

It was approaching the early 7pm start time, and I grabbed a beer and took a spot under VIP on the deck, slightly elevated above the pit but still nice and close. I think I’ve finally found ‘my spot’ at Stubb’s…I actually really dislike the VIP deck here…it’s hard to see and a crowded sceney mess….I declined several offers to go up there, even though it probably would be good people watching.

To be honest, I was kind of on a keep to myself vibe this evening, and as I settled into my spot, ‘Man in the Box’ started playing….followed by two other Alice in Chains songs.

That’s when I remembered that exactly 1 year ago today, I was seeing Alice in Chains in NYC. And at the end of the show, I picked up a Mike Starr pick off the ground. And that made me get goosebumps, even though it was nearly 90 degrees outside.

Going back and looking at that piece, I roll my eyes at myself. That’s the beauty of this site I guess….rather than it just being your cut and dry show review, I know exactly how I felt last year. And I can look back and mentally slap myself for being so retarded. This year I have learned that if I don’t like something about my life that I can change, I will get up and do it right then. Because we don’t have time to waste. And it’s dumb to just keep complaining.

Anyway, I was happy when the Valient Thorr guys came out on stage and Valient himself screeched “LET’S FUCKIN’ PARTYYYY!!!” At this point, I’ve seen VT many times and I find them to be really fun. Beyond musicianship and songs, they are great with the crowd. The highlight would be when Valient jumped into the pit, parted the sea, and had everyone crouch down: 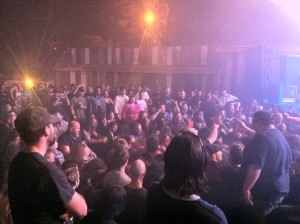 With all commentary followed by “you know what I’m talking ’bout?!”, a hand gesture known as the rocket launcher, and quotes like “for all you musicians aspiring to be up here some day, don’t eat before you play, because I feel like I’m about to shit on the stage. Thanks Stubb’s”, VT always entertains. 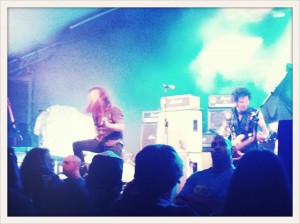 Between sets, a completely random guy walked up to me and gave me a beer (sealed of course, I’m not stupid). He just introduced himself and walked away…didn’t even try to make conversation like the other dude beside me did all evening. And Mastodon’s ‘Crack the Skye’ was playing over the speakers. It was just my lucky night.

I enjoyed this Clutch set much more than when I saw them on the same stage but from a different perspective late last year. I thought it was perfect that the band who’s hardcore fans call themselves ‘gearheads’ would open for MotÃ¶rhead. Neil Fallon walks the stage almost preaching to the crowd, which I especially liked during ‘Texas Book of the Dead’. For whatever reason, I could see the drummer, Jean-Paul Gaster, quite well, so I spent most of the time watching him pound away. Clutch are a very straightforward band that do what they do very well- play southern-tinged rock/metal with no frills for their appreciative fans. It’s easy to just space out watching them as the scent of BBQ, sweat, and beer waft through the air. The sun had now set, and the place was completely packed. 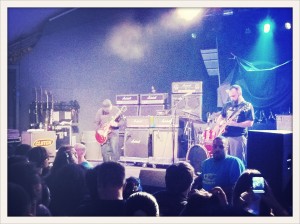 The day before the show it was announced that Austin had made today, March 8, 2011, MotÃ¶rhead Day. Unfortunately, they spelled Lemmy’s name wrong…..but I guess it’s a cool gesture. As I was watching the crew set up, I thought about how, over the past couple years, I’ve gotten to know several people connected to the MotÃ¶rhead camp in one way or another. I’d have to say that the closest thing I could compare it to is growing up around a bit of the Willie Nelson scene. The people involved are lifers: they live and breathe the band and are fully committed to making it work. In fact, there are a lot of similarities between Willie and Lemmy: they are iconic, appeal to people outside their genre, and are both old road warriors who have survived a grueling lifestyle almost to the point of mystery. I started geeking out on this so much that I had fantasies of Willie making a guest appearance that night that I could claim to be part of my birthday mojo; but alas, Willie was On the Road Again somewhere.

This time I was prepared for my ears to bleed the minute Lemmy fired up his bass and Phil Campbell started wailing on the guitar. The crowd was so excited; they were almost as loud as the band. This was technically my second MotÃ¶rhead show; though I’ve seen Lemmy perform other times outside of MH. I knew exactly what I was going to get, and that was exactly what I wanted. Things started flying on stage, bodies started flying over the barrier, and a couple chicks’ clothes started flying off. It’s funny to see Lemmy’s gaze distracted by a pretty, or just naked, girl. Granted it was Fat Tuesday, and there were several people with beads in the crowd…but the girl in basically just underwear….really?….if you were there you know who I’m talking about. 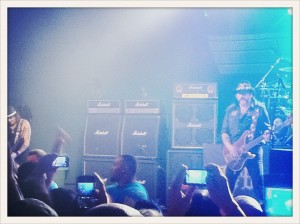 I was distracted for a while trying to figure out what was sitting on top of Phil’s amp…turned out it was a gorilla in a baby MH shirt. I inquired about it later and found out it was a prop they had bought for fun earlier in the day. I also kept watching a man side stage in a kilt with his kiddo on his shoulders in big headphones rocking out. I loves the metal kiddies….uh oh, my biological clock is tick-tick-ticking. 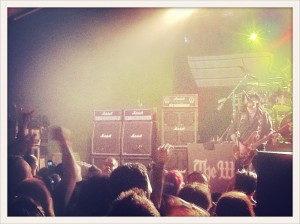 This show was exactly what I needed to kick off what is sort of a new phase of my life. Birthdays are kinda like New Year’s resolutions; a good time to put a fire under my ass to do things instead of talk about them. In the next month and a half, my new site redesign will launch, I’ll cover SXSW and do more interviews and show reviews in about 10 days than I ever have, and then I’ll go off on a three week soul-searching expedition in Europe. I may not have a lot of things 30-somethings do; but I do have my freedom, and I’m going to use it.

Leveling the Plane of Existence: Kataklysm, All Shall Perish, Abysmal Dawn @ White Rabbit, 3/13/11