“Tonight we’re summoned for a divine cause”

I can distinctly remember the first time I listened to Ghost‘s Opus Eponymous. It was after months of hesitation after hearing about it nonstop that I finally caved in. “Deus Culpa”…okay…”Con Clavi Con Dio”…hmmm, this wasn’t what I expected….”Ritual”…I was hooked. It was that natural feeling that I get with albums that become a part of the fabric of my life- it’s like I’d heard it before, it satisfied some kind of craving, and it felt new and different all at once. And I’ve played it nonstop since. To explain Ghost to others requires a short conversation about Satanic classic rock, which is confusing to many. You just have to listen to it. And Ghost appeals to a strange subsection of music fans: casual rock fans and the hardest of metal fans have found themselves bowing down to the genius of Ghost’s first album.

Last year, Ghost was supposed to tour with Enslaved in what was one of my most anticipated tours of the year; but “visa issues” caused them to cancel. And when they announced their small, headlining tour for early 2012, I was somewhere in a temple in Cambodia. But my friend snatched me a ticket, and I found a way to LA. It seemed an arduous path to this show as I walked into The Roxy to finally see this mythical act; it had been a long time since I’d been this excited to see a new band.

Pressed up against the stage, waiting in anticipation, I watched the expectedly mixed crowd file in. There was a certain tension in the air that was a misfit for a band this new. The lineup of bands was well curated: all featured satanic lyrics within unexpected musical backdrops set to theatrical-leaning performances. 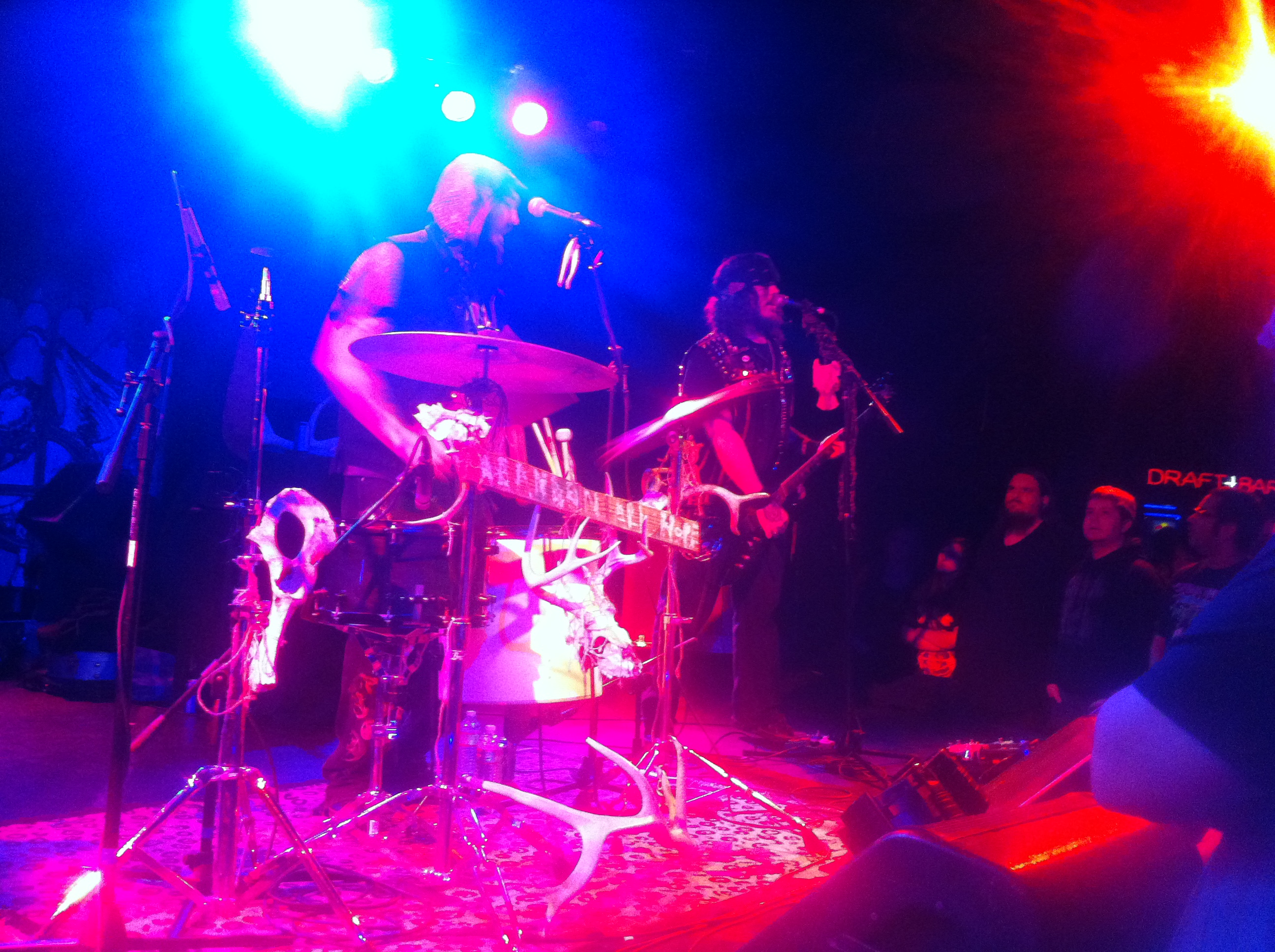 Starting off the evening was Ancient VVisdom, who hail from my homeland of Austin, TX, and feature an ex-member of Iron Age, one of my favorite newer bands who unfortunately have called it quits. A bizarre concoction of vocalist on drums, electric and acoustic guitar, and bass- there were parts of their set that drew me in, and others that did not. The drums were emblazoned with a sign stating “Abandon All Hope” as well as various skulls and bones and a machete was part of the kit for musical purposes. The band played intensely; even when I wasn’t digging the music, I appreciated their commitment to their cause. Blood Ceremony hail from Toronto, and consist of a female vocalist in a tight, fringed, shorts getup and witch shoes, a barefoot bassist, a hippie guitarist, and a mismatched drummer. She writhes around the stage giving the audience the eye, playing either keyboards or a flute. Yes, a flute. I can’t see a flute without thinking “this one time, at band camp” automatically, just like if I see a cowbell I have to go, “more cowbell”. Their sound was highly unique, especially when the eerie sounding flute stepped in. The crowd was really into it, but I just couldn’t get there.

“Lucifer. We Are Here For Your Praise Evil One”

As the curtain lifted and revealed Papa Emeritus and the Nameless Ghouls, you could almost feel the collective joy of the crowd to be in their presence. And as they began “Con Clavi Con Dio”, we all lifted our hands in the air, singing along that first line as if we’d been instructed to beforehand. That is the power of a strong song; it unites strangers. The Roxy stage is low and intimate, and I could see the color of the eyes of Papa Emeritus as he sang to us. It had been a while since I’d been that close to a band…especially one I hold in such high regard…and it felt overwhelming to all of my senses, especially since I was inhaling the strong smell of incense. 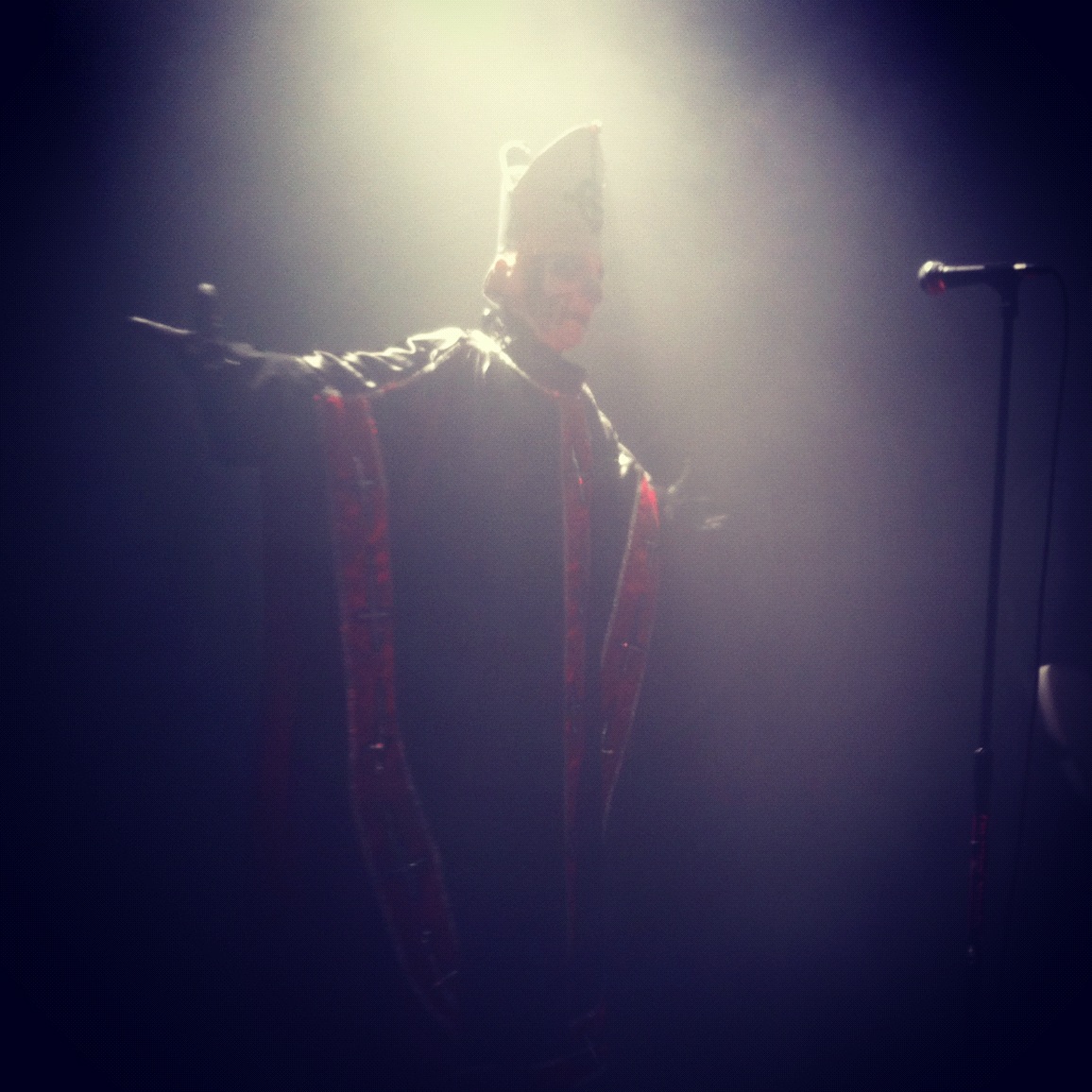 A good show is like a religious experience, and this one was literally so. We reached out our hands to touch the riffs as they emanated from the guitars, we sang along like disciples in church. I’ve seen many bands that dress up- from GWAR to Portal– but Ghost pulls this off in a very different, believable way.

I watched the Nameless Ghouls play effortlessly in their faceless attire. Seeing an album you love so much come to life in front of you is a magnificent thing; it gave another dimension to it that will imprint my listening experience of the album going forward. As the familiar songs kept coming, it only kept getting better…”Prime Mover”…”Stand By Him”….”Death Knell”….and “Satan Prayer”, which was rearranged into an extended version. 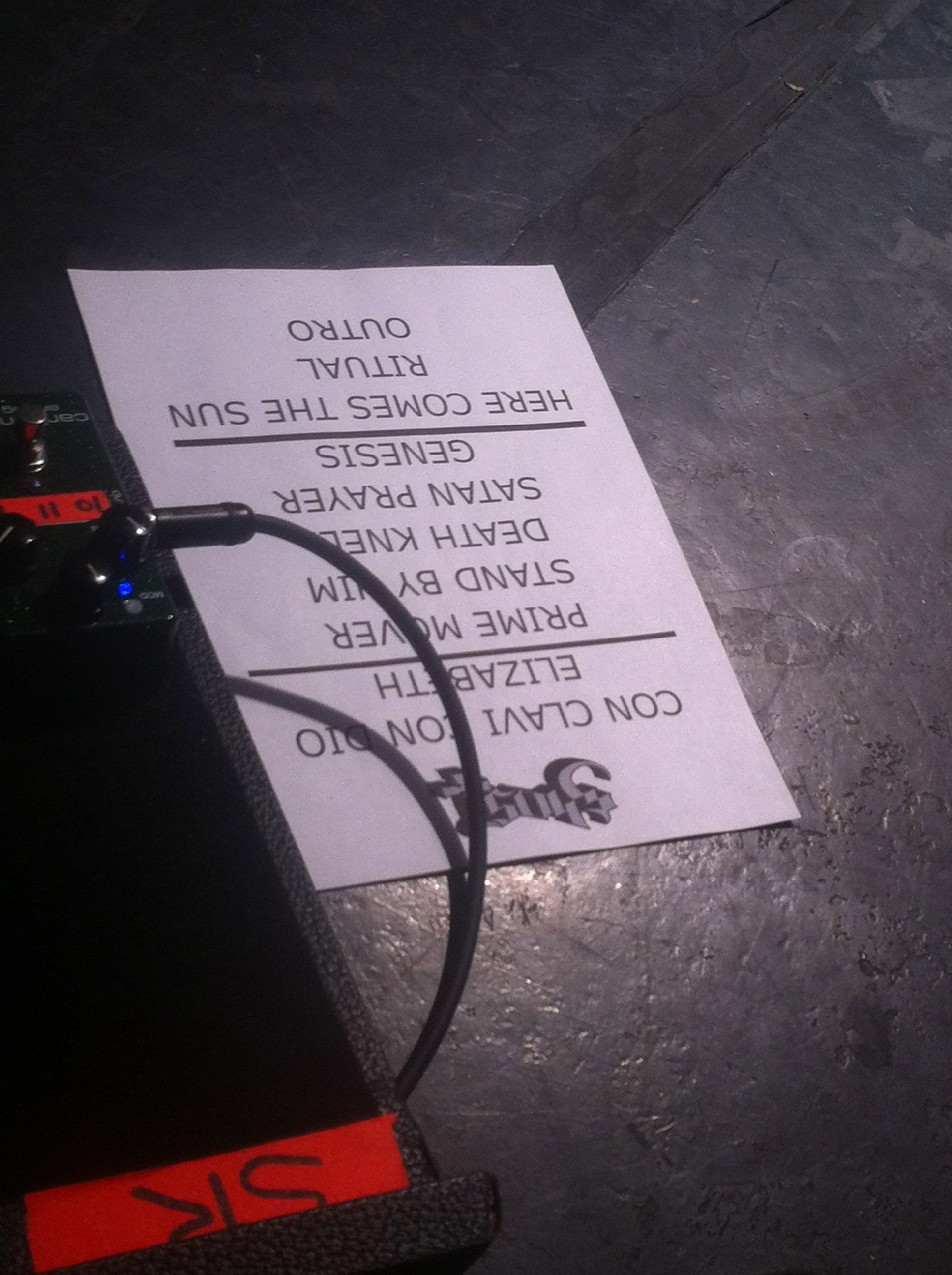 But it was the end that really did us in. “Here Comes the Sun”, their cover of the classic Beatles song, was an audience favorite; my eyes left the stage for one of the only times all night to watch the audience in ecstasy. And then “Ritual”, the song that started it all for me…the song that 15 seconds into it I knew it was going to become a part of me…was the final revelation. We were offered communion, and we accepted it. Forgive us, Papa Emeritus, for we have sinned. And I can’t guarantee we won’t do it again.

Which is ok, because I already have tickets to see them the next time they come around…