I will find a way
I’m confused, ohh
But I think I can try
I will save your life
I will try for you”

I left the show intent on sorting out matters of the heart with him.

The final song of the night, ‘7 Words’, had us geared up for the last push from the rabid fans surrounding us. Drenched in sweat, everyone is pogoing with their last ounce of energy as Chino screams “suck-suck-suck-suck….” above us.

The encore begins, and it takes a minute for the energy to get back up to that boiling over point that it had been the rest of the night.

‘Headup’ has the crowd going insane; people are crowdsurfing just to escape the pit at this point, emerging over the rail like shell-shocked war vets. 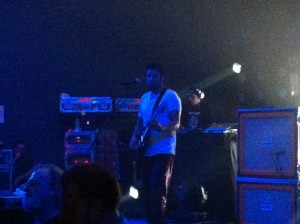 ‘Change’ is a song that has drawn me in since I first heard it nearly a lifetime ago. There’s something haunting about it…this is Deftones‘ ballad. “I pulled off your wings…then I laughed”. When this song released, that is exactly what someone was doing to me.

‘Risk’ was by far the highlight of the evening. “This one right here is for our boy Chi“. I had chills watching this performance, thinking about what this song means to them…to the crowd….to me. Chino is crouched down, an arm outstretched, “I will save your life”. To move on as a band when a member’s life remains in jeopardy…it must be difficult. You can hear it all over Diamond Eyes. And this is probably why people really connect with this album. Looking at the crowd, all the alternative kids high on seeing their favorite band, you can tell this music has probably saved a lot of their lives. Because that’s what the music of your favorite band is supposed to do for you. For me, this song stood out when I first put this album on in my car after my mom died. That desperation to try to save what might be unsaveable. The idea of risk and reward, and how that facilitates all of these highs and lows in my life. I take risks….maybe too many for my own good.

Props to this videographer:

‘You’ve Seen the Butcher’ had interrupted my interview earlier as they were soundchecking it, so the heaviness of this song was initially offset by my giggling about that. Then the song started crashing over me. “You enter slowly….You know my room…You crawl your knees off….And then you shake my tomb”. Such interesting lyrics. It was around this time that something fell a mere inches from our heads, landing on the ground in the photo pit. It turned out that it was a light from above us. That could have easily seriously injured someone.

“I relate to your kind…Your design…” ‘Prince’ has that balance of being hard and soft. “Itâ€™s a game that we like…We crave (yet nobody wins)” I’m familiar. A girl nearby me burned my arm with her swaying cigarette.

‘Minerva’ into ‘Diamond Eyes’ was like a giant pendulum swing. With Chino stepping back to play guitar, ‘Minerva’ was a quiet break in the set before ‘Diamond Eyes’ revved it up again. 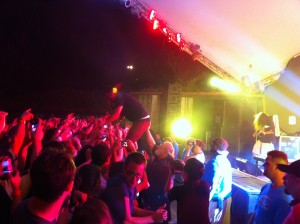 “SHOVE IT SHOVE IT SHOVE IT!!” And they do, hard. I can remember blasting this song in my car in high school. This is a song everyone’s excited to hear, everyone helps sing. And apparently it inspired someone to climb the tree close to the pit.

“Iâ€™m right next to you…” Deftones’ set starts off with a bang, the crowd brimming with excitement and the girls around me are swooning as Chino comes over and holds their hands. “GUNS! RAZORS! KNIVES! Fuck with me.” Everyone is screaming, pumping their fists in the air. This is the beginning, and you instantly know it is going to be great. “Letâ€™s writhe…Let me see you trip…One move that will keep you wet….Letâ€™s fall in a long sadistic trance….Put the keys in our hands.”

I spent the time between sets on my phone, trying to understand what I had done wrong.

Back at the rail, I took in the atmospheric qualities of EightFourSeven‘s set, listening to the electronic elements combine with the rock elements, reminiscent of two bands I have seen countless times: NIN and The Faint. 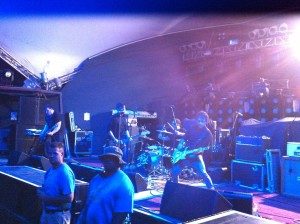 As I filmed the first three songs, I remembered how one of my first dream jobs was to make music videos. I guess it’s probably a good thing I didn’t pursue that.

EightFourSeven took the stage to a packed house. Their sound complimented the headliner while embodying a different realm; I think they won over some new fans with their set. Lead singer Lance has quite the voice, and the band plays dynamically. I was impressed. Their music is dramatic and has a certain melancholy feel to it.

We stayed after the interview to watch EightFourSeven’s soundcheck. Only when Stubb’s is empty do I realize how it’s such a small, weird venue. I mean, there really isn’t anything quite like it: there’s a tree, uneven dirt ground, the umbrella looking canopy encasing the stage, and, of course, the smell of BBQ.

We decided that a small area backstage would be the best spot for the interview. Soundchecks were running late, and we were worried that the Deftones’ soundcheck would start during the interview, and, of course, it did. Not only that, but Chino walked up on our interview and started talking in the middle of it, unbeknownst to my friend who was filming (she thought it was a roadie standing behind her).

Anthony, bassist/programmer for EightFourSeven, meets us at the front and hands us our passes, and we walk into an empty Stubb’s. We find the rest of the guys and start looking for a quiet place to film our interview.

“The doors are at 7, right?” a guy asks us on the street. “Yes” we say. “Then what are all of those people doing in line?” he says. “Waiting to get in, to be up front” we reply, with a silent ‘Duh’ on the end. He looks at us as if he doesn’t get it, and we look at him like we don’t understand how he can’t understand this. It’s 5:30pm. You’re asking two girls who have waited in lines for over 24 hours to be in the front to see their favorite bands.

Stay tuned for my interview with EightFourSeven.

Deftones Setlist: (might be slightly off)
Rocket Skates
Around the Fur
My Own Summer (Shove It)
Be Quiet and Drive (Far Away)
Hexagram
Minerva
Diamond Eyes
Feiticeira
Digital Bath
Knife Party
Prince
You’ve Seen The Butcher
Sextape
Risk
Change (In the House of Flies)
Passenger
Lotion
Headup