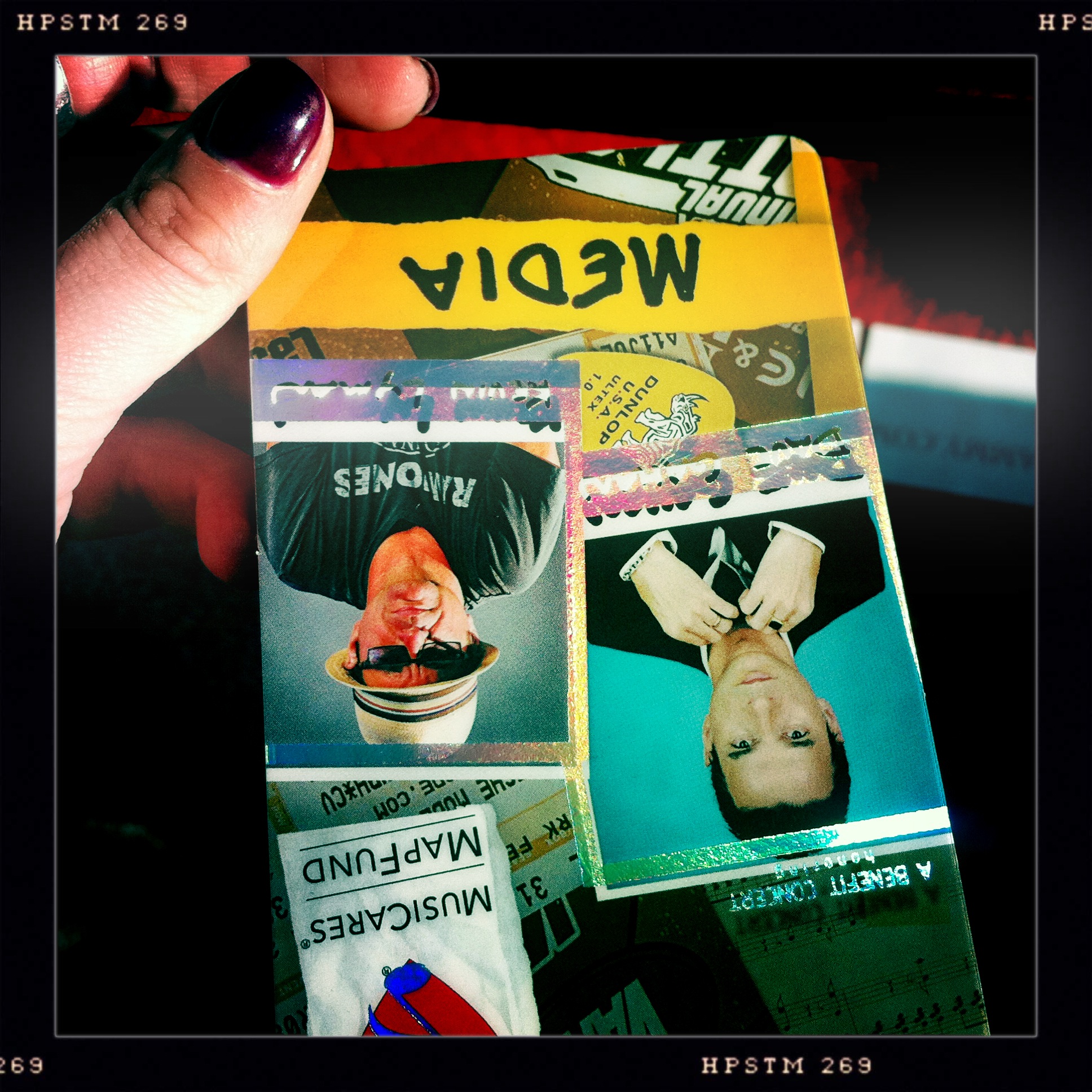 When your hobby begins to take more and more time and you don’t get paid for it but you treat it like a job, the inevitable happens. You begin to wonder if you’re wasting your time. You try to say you’re doing it for yourself and you do but at the same time you hope and wish that maybe even though you won’t ever get paid for it at least what you’re doing can be considered meaningful. And what does meaningful mean exactly? Perhaps it’s not ‘you saved my life’ meaningful but rather ‘I understand how you feel’ or ‘I enjoyed what you did’ or ‘you helped me out’ kind of meaningful. Or perhaps it’s another meaningful entirely: the kind that you would tell your hypothetical grandkids that become increasingly hypothetical as each day, err, month between now and your last date passes, that story about how you worked the red carpet for the GRAMMYs and musicians you admire walking down that very carpet actually knew who you were and stopped and talked to you. At the moment when you wonder if you’re crazy and should give it up to work on some career that you really don’t care that much for but that pays well, and that as a result of that your life will magically become ‘normal’ which means ‘stable’ and ‘comfortable’ and doesn’t elicit raised eyebrows and disappointment from family members who disapprove of how you recently pierced your nose at age 31 and don’t understand how you can love change and things that are unpredictable and loud music sung by ugly/hot guys and not Texas dudes who want to make you a stay at home wifey. And sure, you’d like to have someone to love, but in the meantime you’ll gladly take the way that music makes you feel. 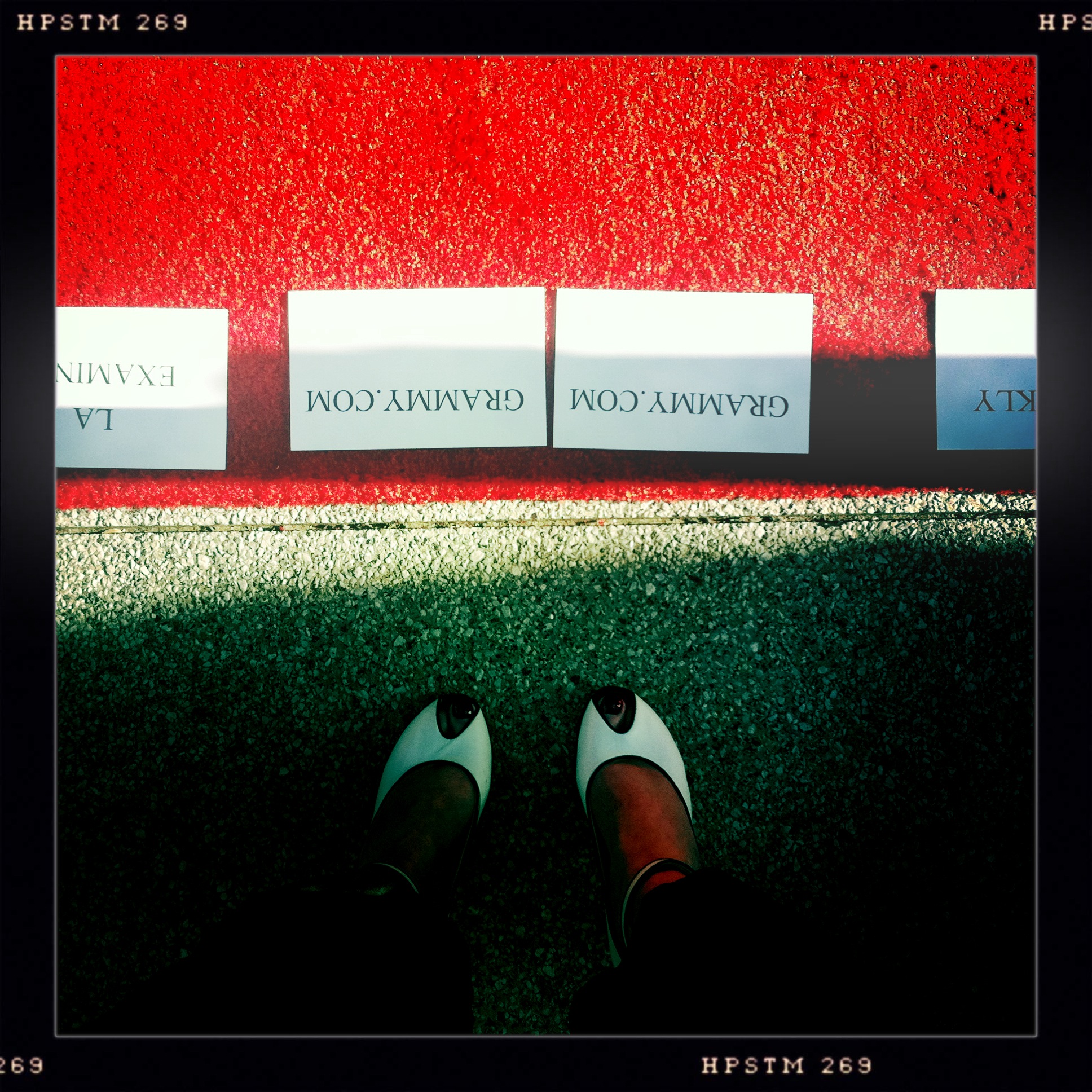 You is me, obviously.

Friday night was one of those evenings that just worked. It was the kind of thing that made me feel like someone told me ‘you’re doing the right thing’, because that person that used to tell me that isn’t here anymore.


The red carpet for the 7th Annual MusiCares MAP Fund Concert was small but with immense star power. I was standing amongst US Weekly, People, and the LA Examiner. While waiting, there were things going on like last minute nail painting and spot the crazy Depeche Mode lurkers. Once the celebs started to walk, there was the usual, ‘who is that?’ said sideways through clenched teeth as we tried to help each other out…luckily this time I knew pretty much everyone. I was happily snapping hipstamatics and tweeting away when a PR girl brings over Chester Bennington to me to interview; but then I realized it was probably for the GRAMMY TV crew so I directed them away. Oops, did I just turn down a Chester Bennington interview? Anyway, Justin & Adam of She Wants Revenge were DJs for the evening, so it was very cool to see them walk the carpet after following their career for years. And then I saw him.

People often ask me what band I want to see that I haven’t yet…and there are several but my #1 is Depeche Mode. Work, NIN, and a canceled DM show have prevented it from happening. So tonight was my little nibble at what that experience will be like until I get the full fledged thing. They’ve been a part of my musical DNA since the beginning, and though I wouldn’t consider myself a hardcore fan I listen to them all the time and consider them to be one of those bands that everyone seems to like, because they are just that good.

So I’m standing there and I see Dave Gahan down the line a bit, and I’m like, ‘wow’…..snap:

And then he gets closer, snap: 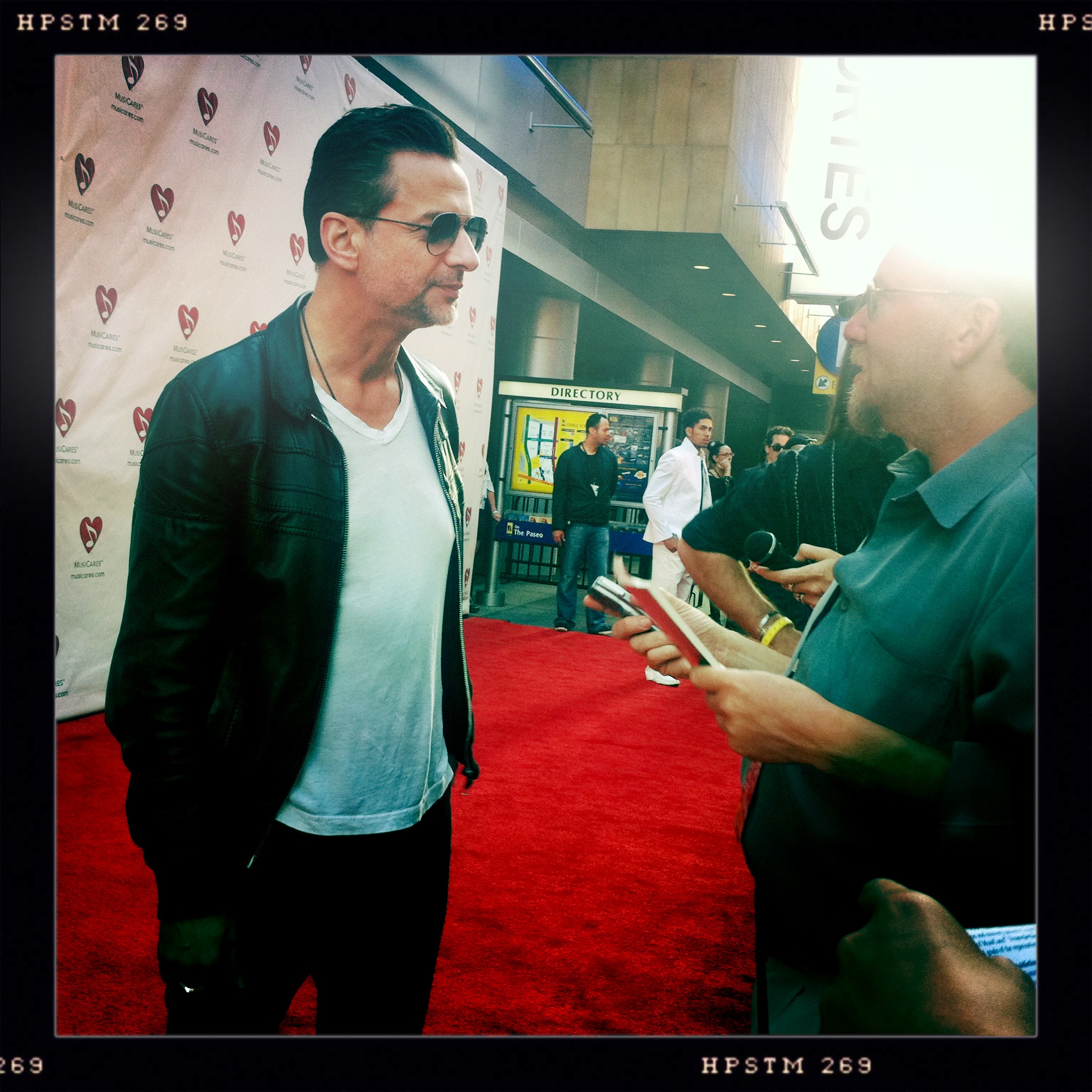 And then I listen to People’s interview that is entirely about his thoughts on American Idol and then he’s right there, snap: 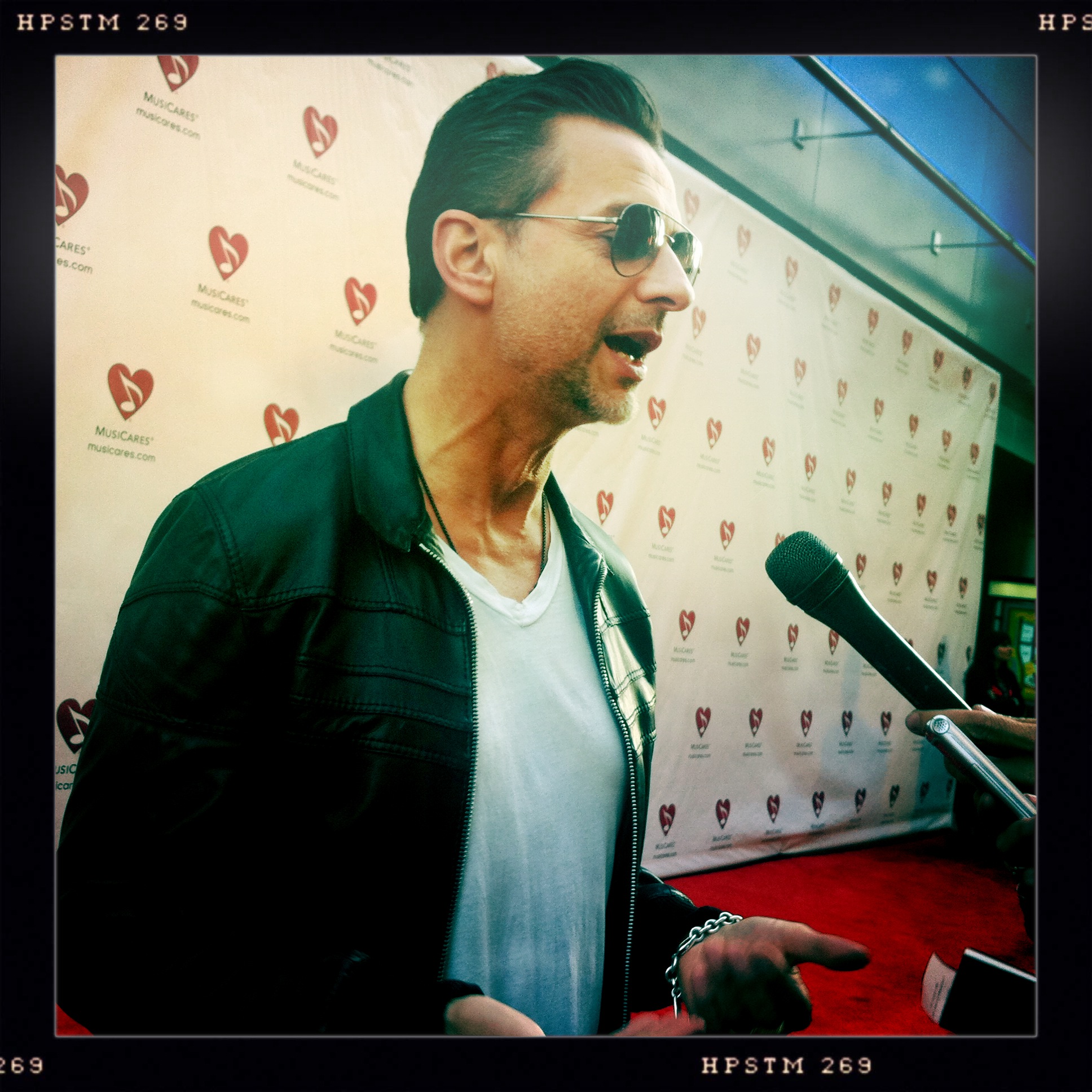 So I’m considering seeing if I can ask him a question, and the only thing that comes to mind is, ahem, a question of time, ‘why do men get better looking with age?’.


Don’t worry, I didn’t ask that…but I almost did to add some levity to the rest of the questions he was having to answer. Addiction was often the subject, given MusiCares mission to assist artists who need help. The subject is very dear to me; I’ve lost and almost lost many friends to it, and I’ve been around musicians enough to see how easily they can fall into it.

A funny moment occurred when Bob Forrest from Celebrity Rehab came down the line and proclaimed that we’d better not get him to spill the details of who’s on the next show, because apparently that happened last year. Billy Corgan and Jane’s Addiction were the last to come down the carpet, and seeing the Jane’s guys always makes me smile because it reminds me of how much fun I had following them and Nine Inch Nails around on tour in the summer of ’09.


After the fun that was the unique experience of the red carpet, I almost forgot there was a concert to go to! I met up with my concert buddy and inside we went, and I was reminded of how tiny this venue is. We had good seats in the lower part of the balcony, and watched Justin & Adam finish up their DJ set.

For a run down of what happened at the show, you can see my GRAMMY blog here. I will, however, rehash the final portion of the show.

When you go to an event like this, you have no idea what to expect. Things can either be really good or really bad. Like when I saw Metallica at a Bridge School Benefit and they played mostly covers. And that’s exactly how this one started. But Dave Gahan lived up to the myth of epic proportions that I had been reading/hearing/watching on TV my whole life; this honey voice (literally, he drinks honey on stage) emerging from this writhing sex pot of a man. It’s when you look at someone and think, that is exactly what they were born to do, can you imagine if he had never realized he was a performer and the only way you ever heard that voice was as your waiter or bank teller? And then came the screeching beginning of ‘I Feel You’, which may have been the first DM song I ever heard, if not the first one I fell in love with. It starts out all stripped down and quiet and then blossoms into the sexual rock song that it is. And Gahan is flapping his arms in a way that looks better than it reads and crouching down to belt out those simple yet extremely meaningful words, “I feeeeeeeeeeeeeel youuu”. And I’m like, wow, this may be a dry event due to the cause at hand but I feel drunk with excitement. I mean, I’ve waited 20 years for this! And it’s living up to every expectation, even if it’s Faux Mode. Because this is really all about that voice.

And then something happened that was as close to a religious experience as I think I can get. I heard something that triggered something reptilian in my brain, muscle memory of a song by a band that is also in my musical DNA and means so much to me that sometimes I can’t listen to it because it hurts. I think my rational brain said, ‘no, false alarm’ but then it kept going and then I heard those words:

“When routine bites hard, and ambitions are low…”

I looked at my friend and did the natural thing any blogger girl would do, growled “FUCKING PRESS RECORD!!!!!” since she had her camera in hand, like how Chris Farley talks to Adam Sandler and David Spade in the classic GAP SNL skit. And then my eyes welled up as I listened to that song be sung by the honey voice instead of the hollow voice and it took a whole new meaning. Twice I had to look at my friend and squeak out, “is this really happening?!”

Now, this may seem silly to you, that I would have this kind of reaction….but for someone who’s life occurs at concerts instead of between them, it was like the Holy Grail.

I was also pleased to hear him cover The Damned’s ‘New Rose’, which kind of lifted the heavy of what had just occurred. “I never thought this could happen to meeeeeee”….

And then it was time for the grande finale, as a familiar figure that is Depeche Mode’s Martin Gore joined them on stage to perform ‘Personal Jesus’. And the crowd is freaking out as Rev. Gahan is instructing us to ‘reach out and touch faith’, and everyone’s arms are outstretched and I can, for a second, catch a glimpse of why people go to church. But rock ‘n roll is my religion, and if tonight taught me anything, it’s that perhaps I should continue to have faith in what I’m doing a little while longer, just to see where it takes me.

“Feeling’s unknown and you’re all alone…”

See photos from the night here.