I was driving back to Austin for the third time this week, replaying a conversation in my head. Today was the day I realized that my readers – often strangers – know more about me than some people I know in real life. I was thinking about how messed up that is on several levels as I sped along to the beats of Combichrist.

I spent about a year or so as a club kid wannabe in the mid-nineties, sneaking off the Austin to go to raves and clubs with my friends. And here I am, driving the same path 15 years later, with a change of clothes in the car for the industrial club later just like I used to do, because bondage pants don’t look as good in the daylight.

It’s after 10pm by the time I make it into Elysium. Halloween may have been a few days ago, but here most are still in costume. I love goth kids…make fun of it all you like, but you have to admire the dedication it takes to dress up like they do. I’m like a kid in a candy store…there is so much to look at I barely notice that Aesthetic Perfection is on stage already. I’ve never been here, so I walk around before finding a spot on the stairs that elevates me above the crowd and gives me some space so that I don’t have to worry about getting hit by a guy holding a glowstick, or a girl’s large and intricate hair.

Aesthetic Perfection is a three piece with a lot of similarities to Combichrist – especially in the way the drummer plays. It takes a bit for me to adjust to this kind of music…I don’t go to industrial shows very often…but once I’m ‘there’ I remember that this type of music is a huge part of me. It takes me to a place I rarely get to go but am so comfortable in….and it’s as close to a NIN space as I’ll get nowadays. AP are good…I’d go see them again, but would get smart on their songs first. 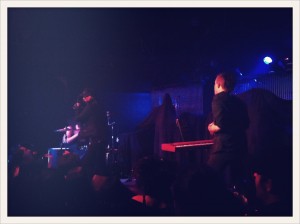 At a rock show, I bang my head…maybe tap my foot, and will throw the occasional horns if I’m particularly moved. But at a show like this, I full on dance.

I was supposed to be a ballerina. If I were genetically gifted with a talent, it was a dancer’s body, and a ballerina’s feet. I started when my mom snuck me in to a toddler’s class at a year and a half old. It was my life until I was 16. I was in toe shoes by 11 years old, played Alice in Wonderland in a huge production at 12 years old, was scouted for a fine arts high school, had dreams of Julliard. I won competitions, I taught little kids how to pliÃ©…and then at 13 my parent’s moved me to this stupid small town with a sorry excuse for a dance studio. I tried to keep it up for years, but by 16, I was done. I loved to perform as a dancer….as long as I don’t have to speak in front of crowds, I can turn it on. And between being a dancer and playing the violin, I developed a great ear for music. That’s pretty much the only thing from that experience that I still have…that, and jacked up feet from wearing toe shoes when my feet were still growing.

I miss being able to physically express myself. I used to go dancing at clubs when I was in college, but I’m too old for that now. So shows like this are all I have.

I don’t listen to a ton of Combichrist normally, but I will never miss them when they come to town. They are just one of those magic live bands. Last time I saw them was almost exactly a year ago….and it was one of my favorite shows last year.

It was odd not to see them descend the stairs of DNA Lounge, where I’d seen them several times before. Joe Letz – one of my favorite drummers- was dressed completely in white, with white face paint and a mostly blacked out mouth. When frontman Andy LaPlegua came out, I almost rubbed my eyes to try to see clearer because he looked so different. New wardrobe, hair, and he must be working out….yep, he’s Norwegian….one more reason I need to visit that country. Z Marr starts the beats and Trevor Friedrich and Letz begin pounding away and I’m swept up into an hour and a half of palpitating rhythms. 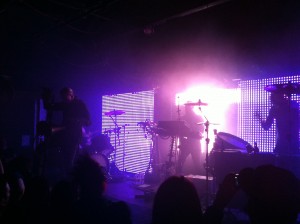 They played quite a bit of new material at first, and one of the new tracks ended up being the song of the night for me. You don’t find it, it finds you.

I split time evenly watching each of the four members do their signature moves. Z Marr headbanging and bending keyboards while balancing on his platforms….Trevor stepping on his drum and playing while sweat and water drips down from his hair….Letz, who seemed much more sober than when I usually see him, played in a trance-like state like a mechanical animal…so wicked looking….and LaPlegua, pacing the stage with demented eyes. 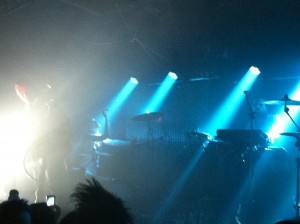 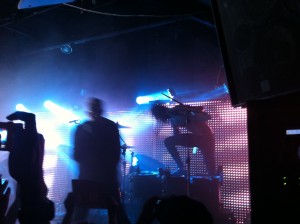 The temperature was swiftly dropping outside, but inside we were dancing up a sweat. The band did several encores…ending with the customary hits ‘What the Fuck is Wrong with You’, ‘This Shit Will Fuck You Up’, and ‘Blut Royale’ and some mild stage destruction. 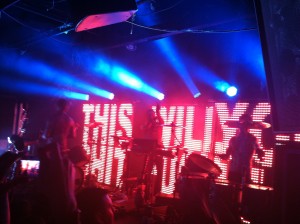 After the show, I was hanging out with some friends who had been in the front, when someone slaps me on the arm. I’m thinking ‘oh no, drunk pick up attempt’ as I turn around, but the look on my face must have been priceless when I see it’s Joe Letz standing there. He’s like, ‘hey, what’s up!’ like he knows me and I’m like…’umm…hi….’ when I notice that he is wearing the same NIN hoodie I have, so I say, “nice hoodie!”. Then he squints at me and leans forward and says, ‘ohhh…I thought you were someone else! I can’t see very well right now.’ Then he turns around and walks off and gets mobbed by the fangirls. I win the prize for having had the weirdest exchanges with musicians I admire.

With any luck, I’ll be seeing Combichrist again next month, opening for RAMMSTEIN!!!