As I worked on preparing all of my coworkers for me to be incommunicado for a full week, vacation brain started to lay itself on top of my already hazy mind. But I shook it off to get dressed for what would surely be an entertaining night celebrating 30 years of Metal Blade Records at the House of Blues. As I was thumbing through my closet deciding what to wear, I chose something that comes as close to wearing the band’s shirt to the show, usually a big no-no for me: 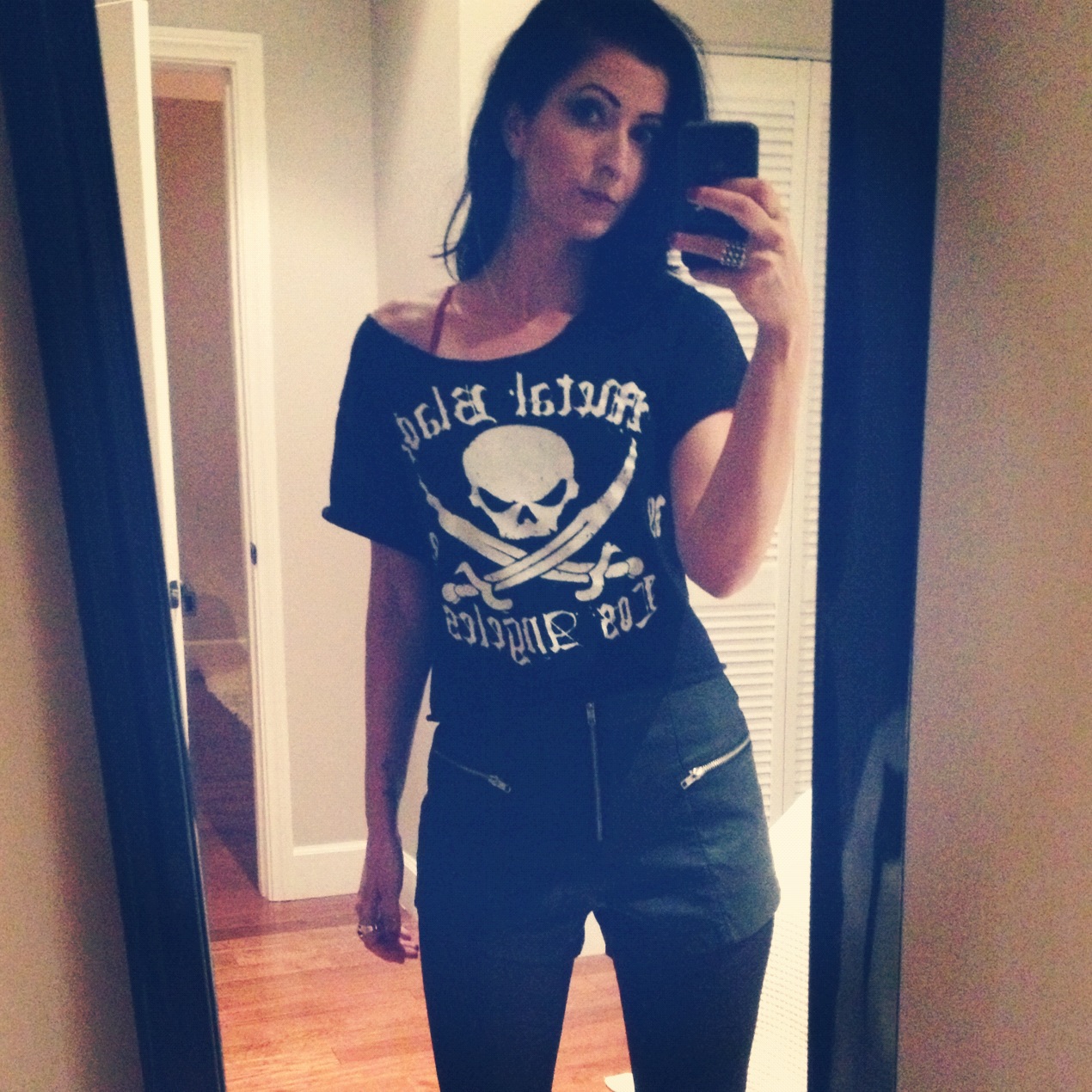 Upon arrival and sorting through various layers of laminates and wristbands needed to get to where we wanted to go, we surveyed what would become and ever-growing room full of who’s who in the metal scene. This would be closely followed by “WTF are they doing here?” and “wow, how drunk are they?” More on that later. 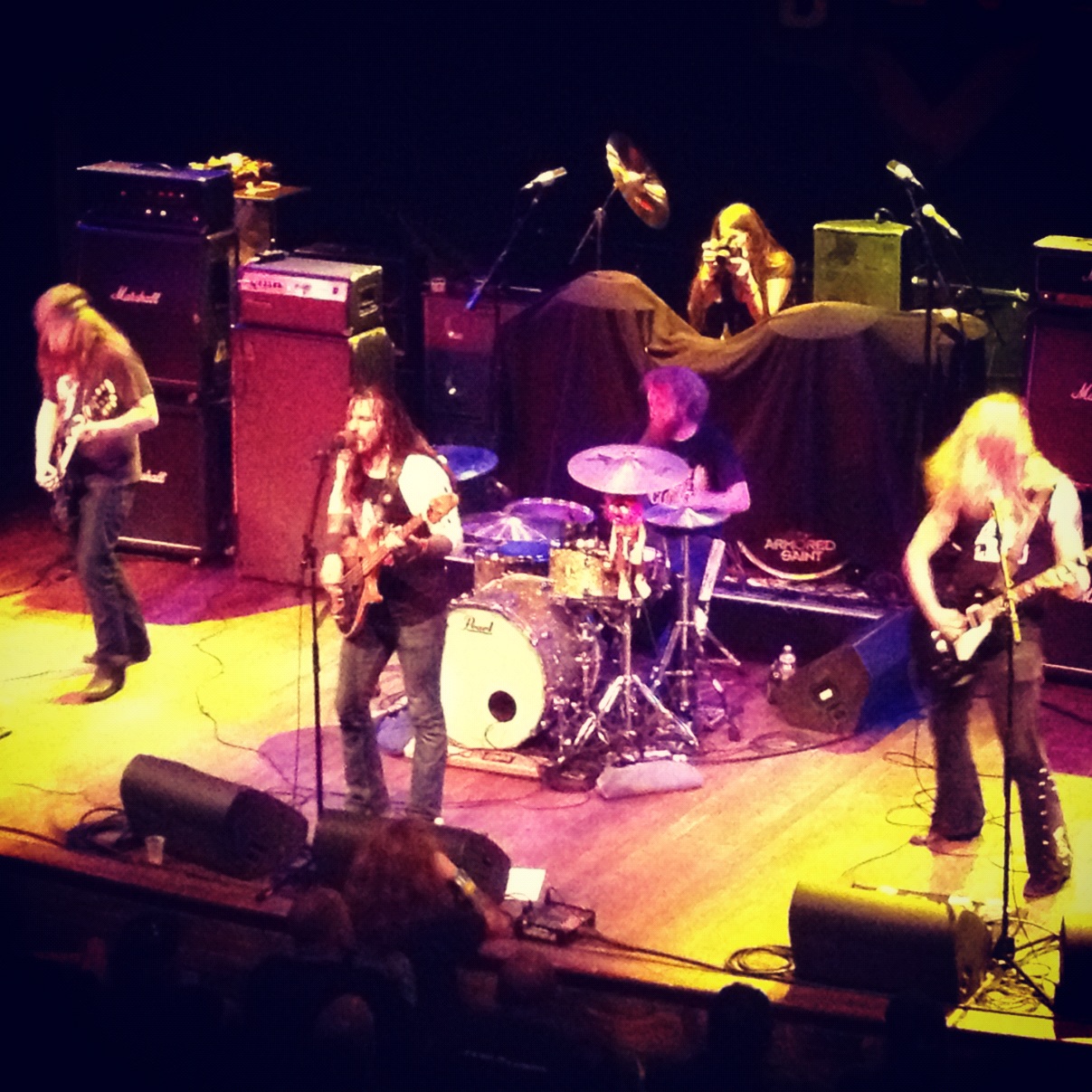 First up were my dear friends in Gypsyhawk. It’s been so awesome to watch their upward trajectory over the past year, and coming off a tour with The Sword seems to have made them as fierce as ever. As much as their new album released on Metal Blade this year is great, we were stoked to hear some of their older songs this evening.

At some point after this set, I looked over and suddenly had this song cut into my brain:

Why was Dylan McKay at the Metal Blade party? Apparently Luke Perry is a metalhead. Anyway, he will always be Dylan McKay to me, and I continually sneered at him all night because I hold that character responsible for causing me to be attracted to assholes for way too many years. 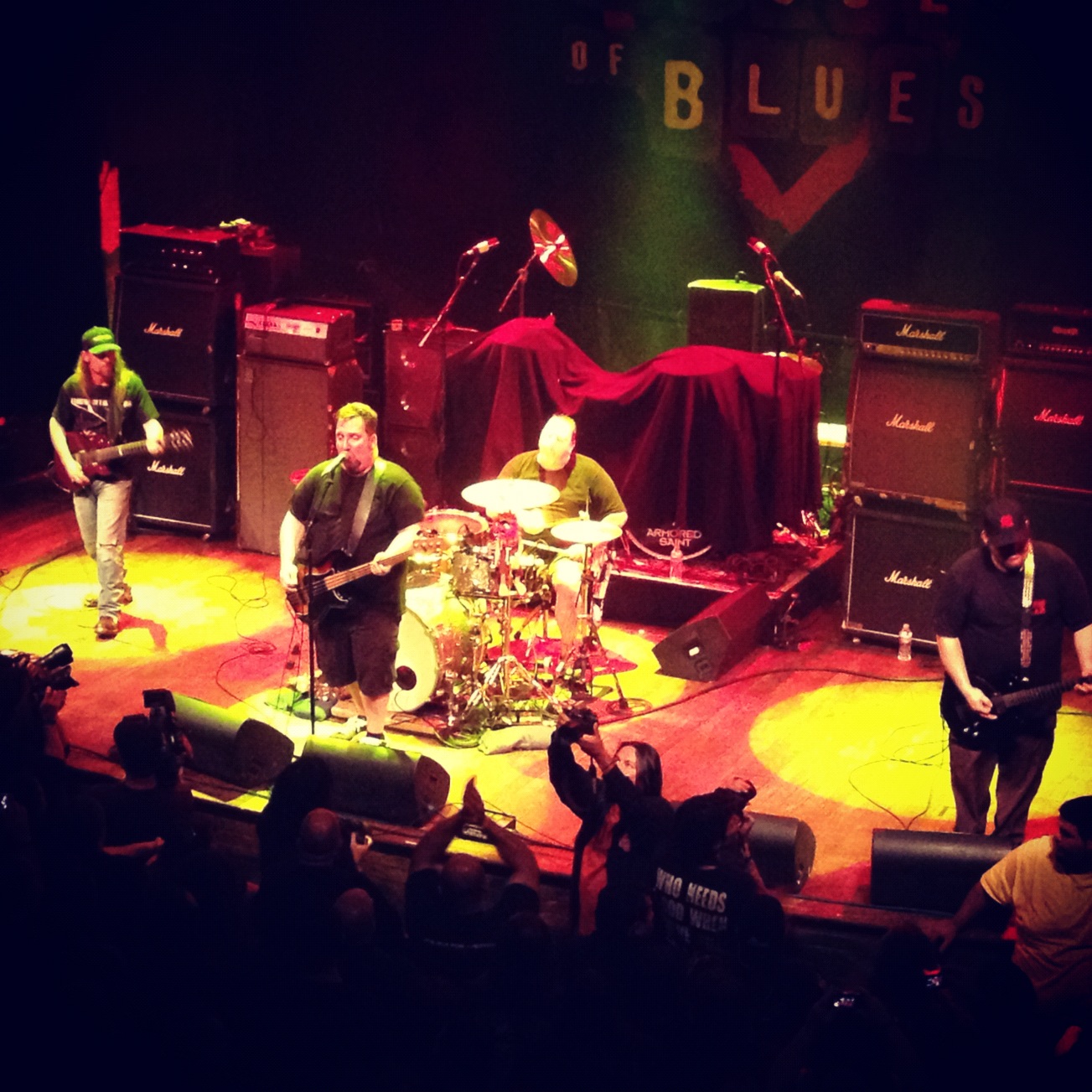 Sacred Reich performed next, who were an early signing for Metal Blade in the late eighties. I know zilch/zero/nada about Sacred Reich, but they played a nice cover of “War Pigs”.

It took FOREVER before Armored Saint came on…and during that time rumors started flying about who would be the special guests. Coincidentally, Metallica played over the speakers many times.

By this time everyone was wasted, as they should be at a metal record label party. As Armored Saint took the stage, me and my younger generation friend looked at each other and said, “Are they wearing wigs?!” And, during song two, two of the members indeed took off their wigs, in one of the stranger maneuvers I’ve seen at a metal show. 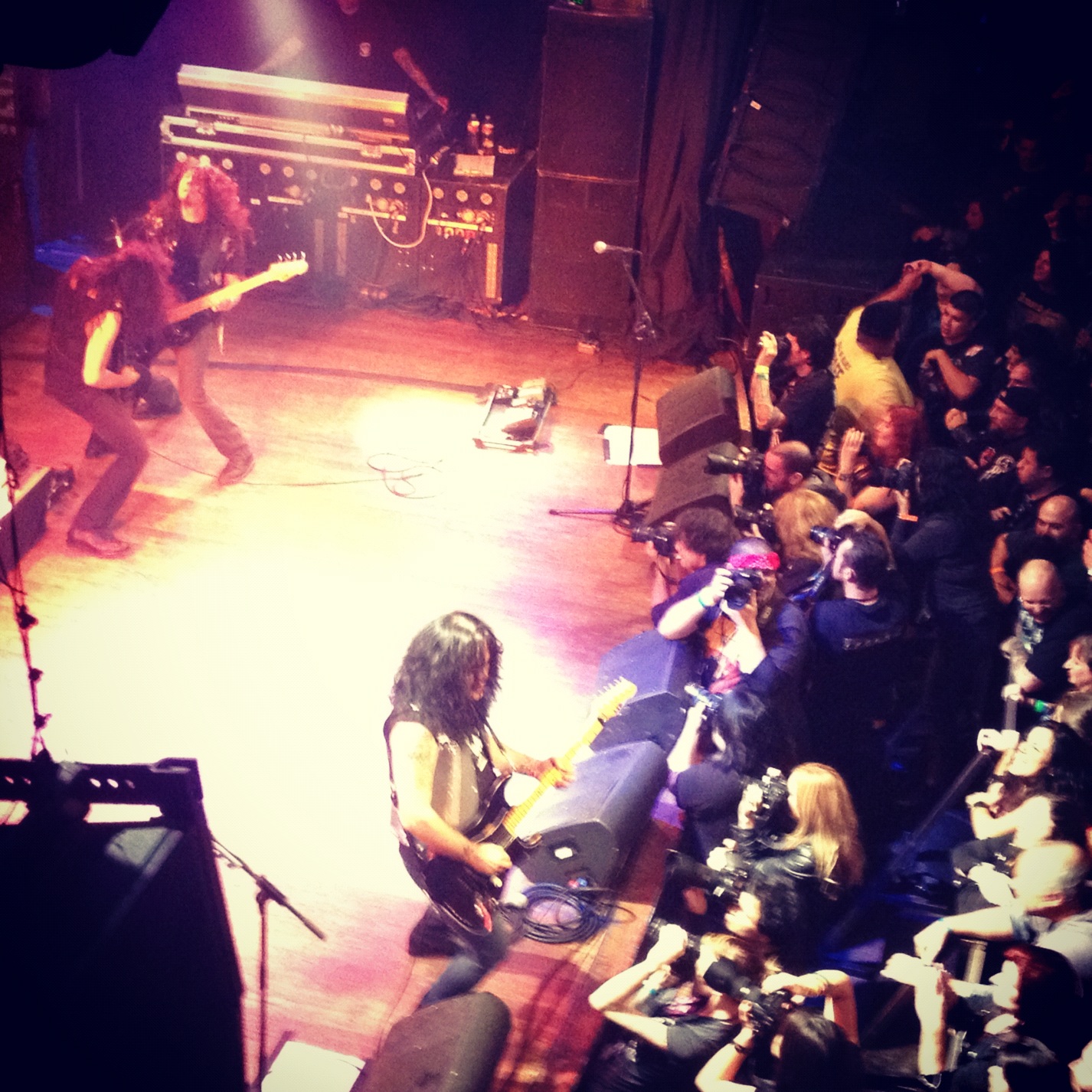 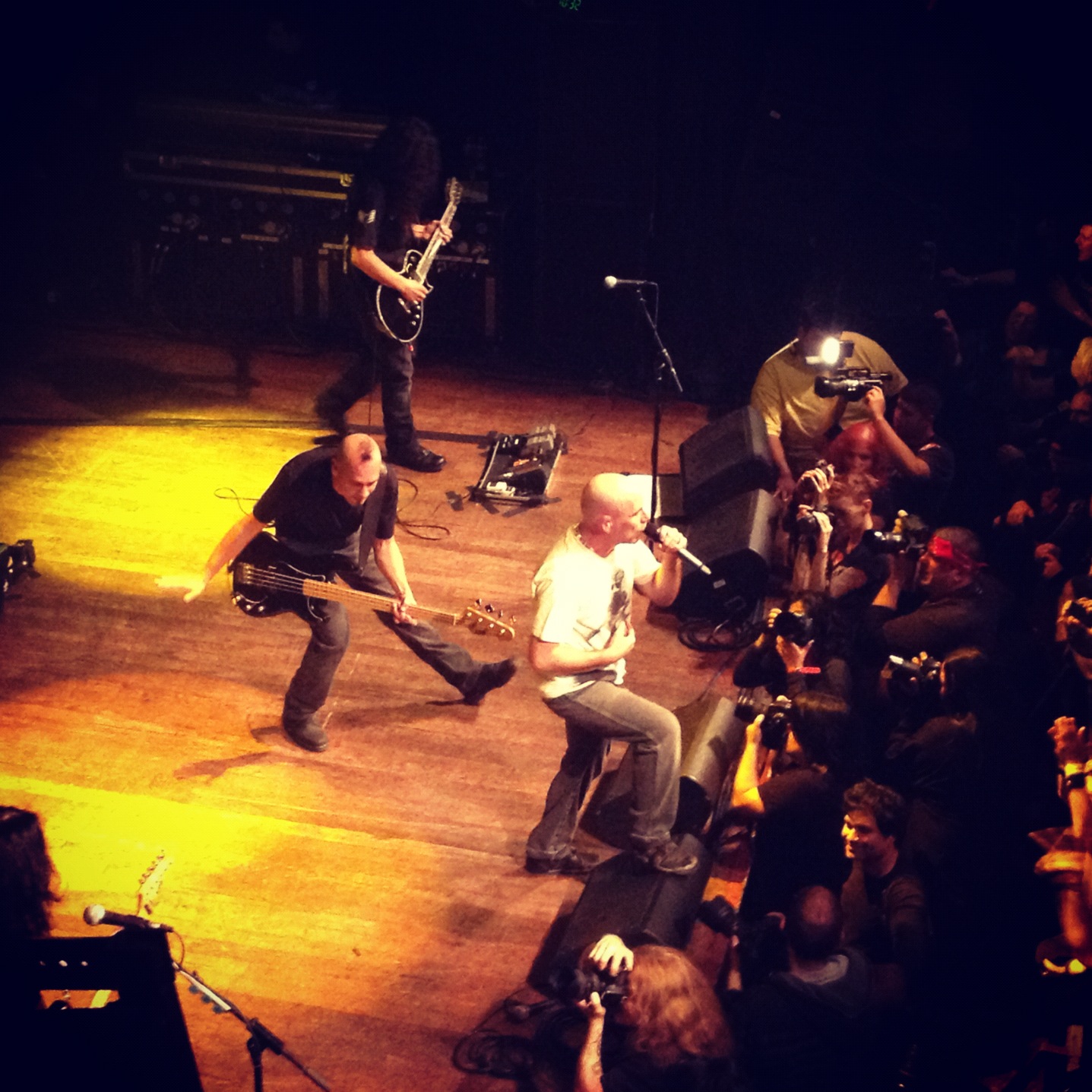 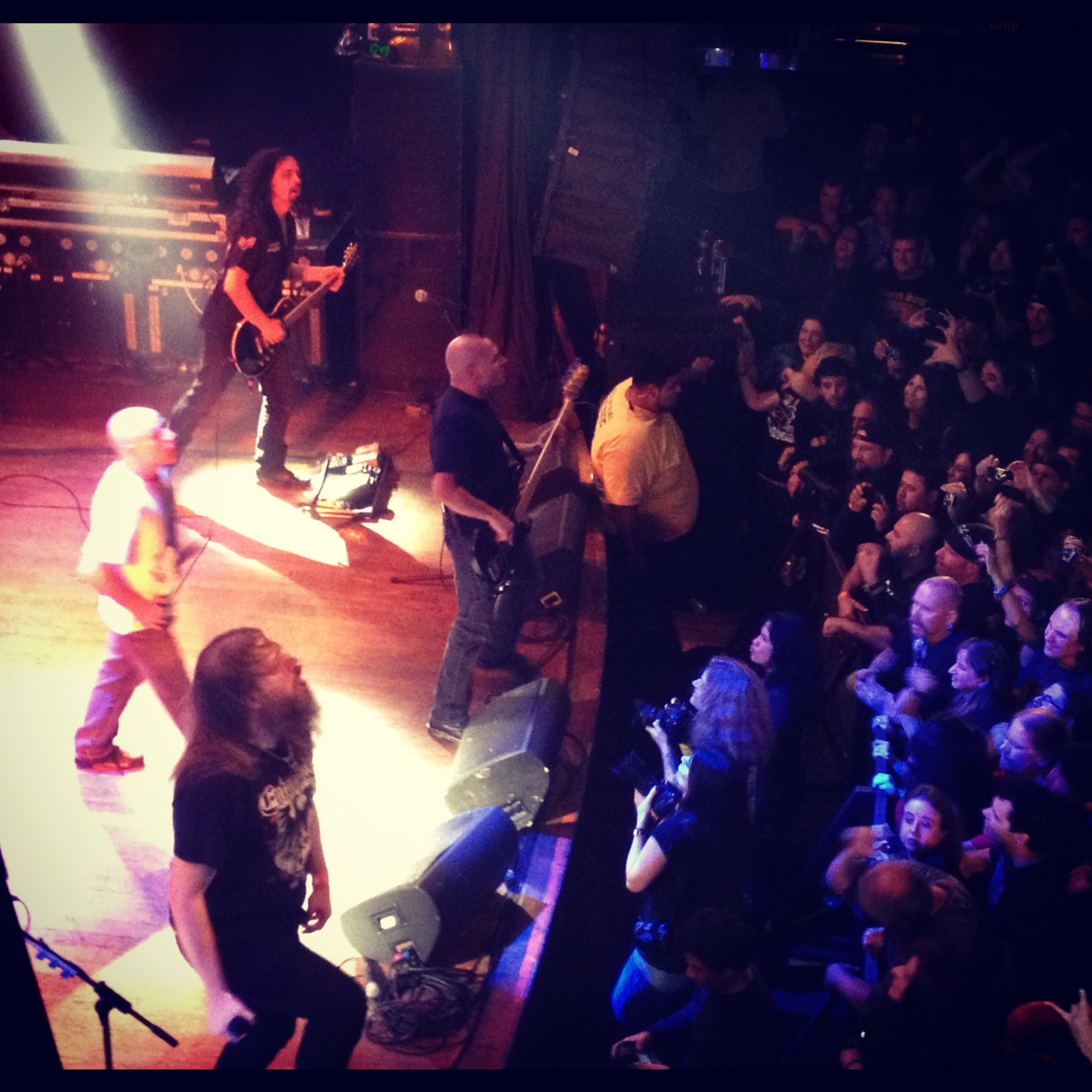 Anyway, it was fun to watch the crowd from my perch above go nuts. But the most fun came when the special guests started to come out. First was this little adorable boy on guitar, which I thought was a cool gesture to have on stage representing the next generation of metal. Somewhere around then I could easily see 3 of 4 members of Metallica sitting there, air drumming and banging their heads along. This made it surreal when Amon Amarth vocalist Johan Hegg joined the band onstage for “Hit the Lights”. My friend and I looked at each other and remembered that one time last year when we went crowdsurfing at Amon Amarth.

Then Dug Pinnick from King’s X and Eric Harris from Gypsyhawk came out for a song. We kept eying Metallica, who were comfortably roosted in their seats…and it quickly became apparent that they wouldn’t be setting foot on that stage.

By the time the afterparty started I was already spent; but it was hilarious and worthwhile to hang in there to witness the DJ playing all sorts of rap music that just really did not belong there. And if you thought white people can’t dance….you should try watching a bunch of metalheads attempt to. I may have busted out a move or two myself….