About a month and a half ago my heart sank as I hung up the phone after agreeing to go on a project in New York City that would cause me to miss seeing one of my favorite bands – The Dandy Warhols – play in Austin. But finally…I made a mature decision to work instead of turning the offer down because of a show!

A few hours later I had orchestrated a flight that would stop in Dallas on the way back so that I could see them still.

The morning of the show, I took an hour to walk around the area where I was staying in New York, visiting the new World Trade Center tower site, Battery Park, and Zuccotti Park. I’m in NYC about two times a year…and every time it’s the same. I try to love the city and I don’t. And everyone seems to be highly offended by this. I’ve never found Brad Pitt attractive, I’ve never had wedding fantasies, and I’ve never understood why people think New York is the greatest city on Earth. There, I said it. 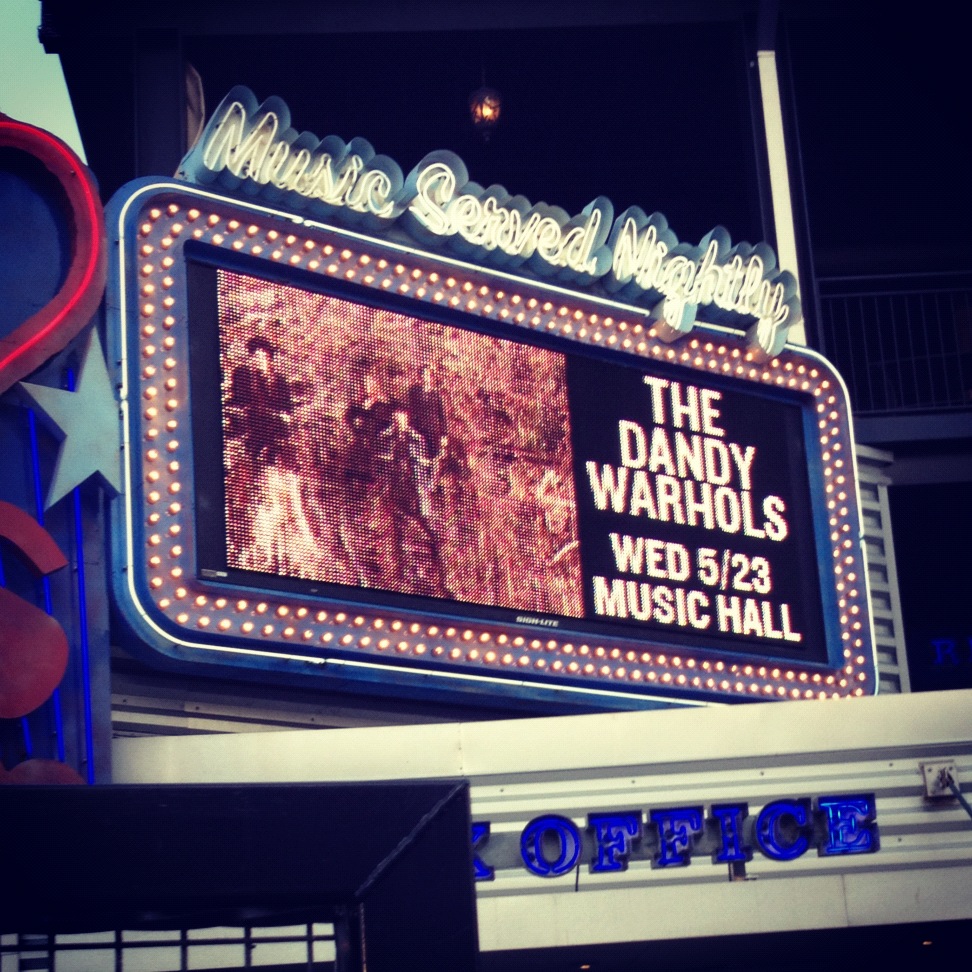 Even though I’m a native Texan, I’ve never seen a show in Dallas before. I was brimming with excitement as my show buddy and I dined before the show. The guy next to us struck up conversation and provided us with the quote of the night: “wait…you girls really like rock music?”. YOU DON’T SAY! 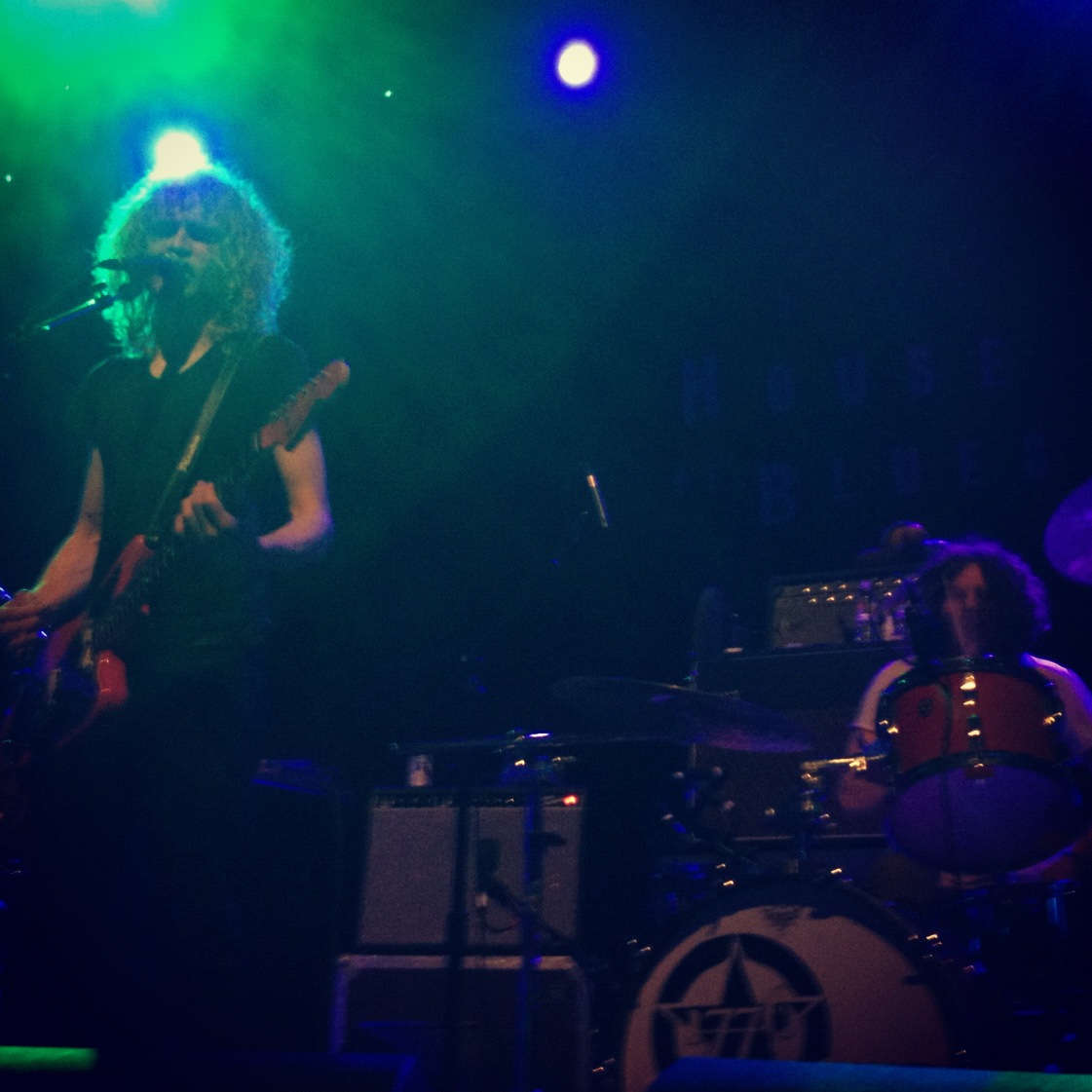 Every House of Blues is kind of the same, so even though I’d never been there before, it felt like an old haunt. We grabbed our desired spot and soon were watching the opener, 1776. The shoulder length curly hair of most of the band members may have evoked imagery of 18th century wigs, but they played a variety of rock music set in this century. I was extremely distracted by the fact that the vocalist had the same profile as Layne Staley. It was a pleasant set that provided a hilarious moment when we caught the drummer trying to remove a hair from his mouth…as a long haired girl I know all about that!

There’s a handful of bands that make me get butterflies in my tummy before they hit the stage, and The Dandy Warhols are one of them. The last time I saw them was an extremely emotional experience for me. As they hit the stage and I became enveloped in “Be-In”, all the stresses of the week melted away, and I was firmly placed in the bubble of their set. 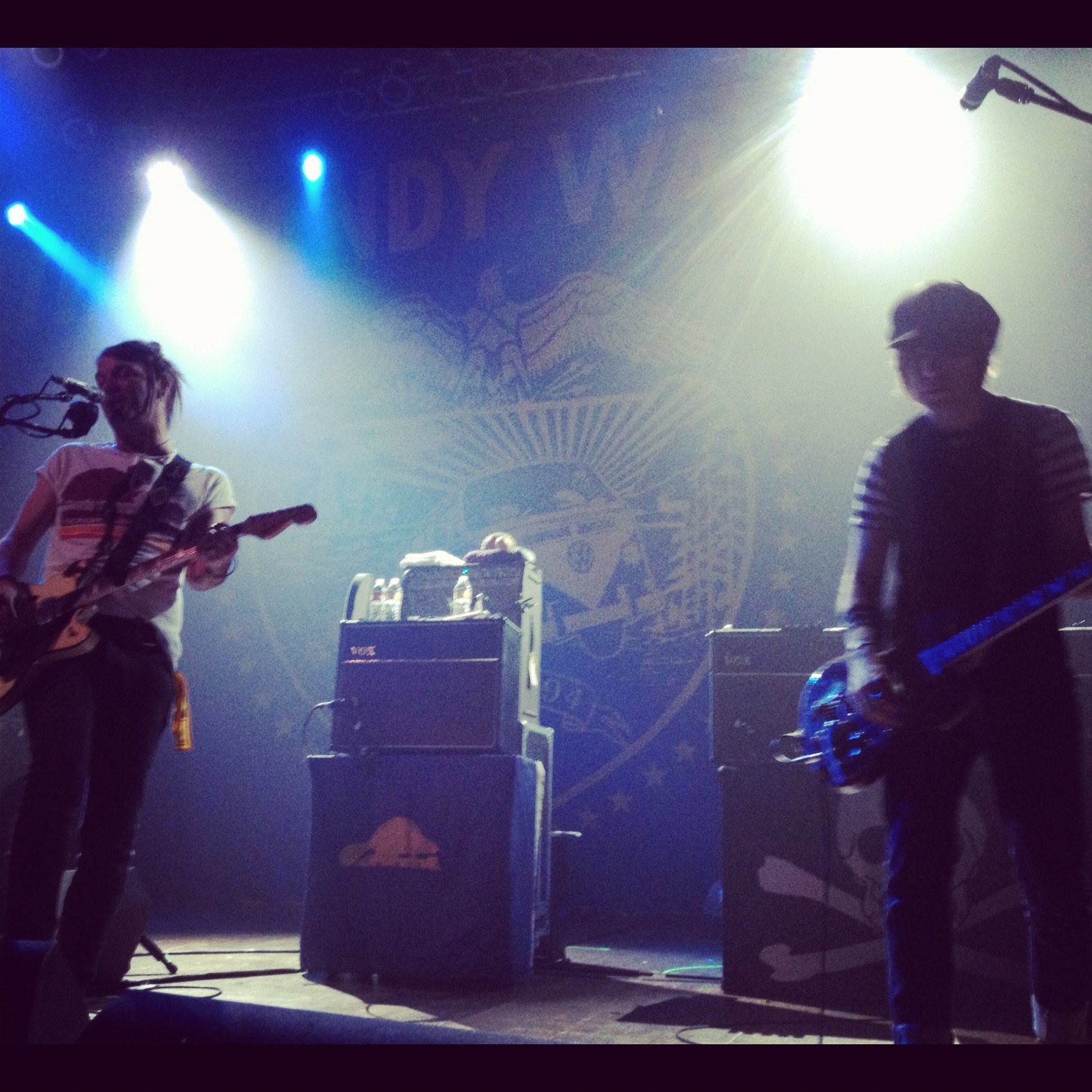 “In my gloom,
I’m only in my doom
And I’ll be in for a while.
I used to think
While I sit and wait for the phone to ring
That I’d be happier if just I am.

These past couple months I’ve been letting go, and it has been the most liberating thing I’ve ever done. It’s such a simple adjustment of the mind, but it affects EVERYTHING! Finally, I’ve just come to terms with my weird life and the fact that I love it as it is. It doesn’t have to be anything else, I don’t have to please anybody else. I’ve never felt better.

“We Used to Be Friends”. People will come in and out of your life and even though they may be close to you, it’s often people’s nature to try to bring you down. Not any more. Bring it on, bring it on, yeah. 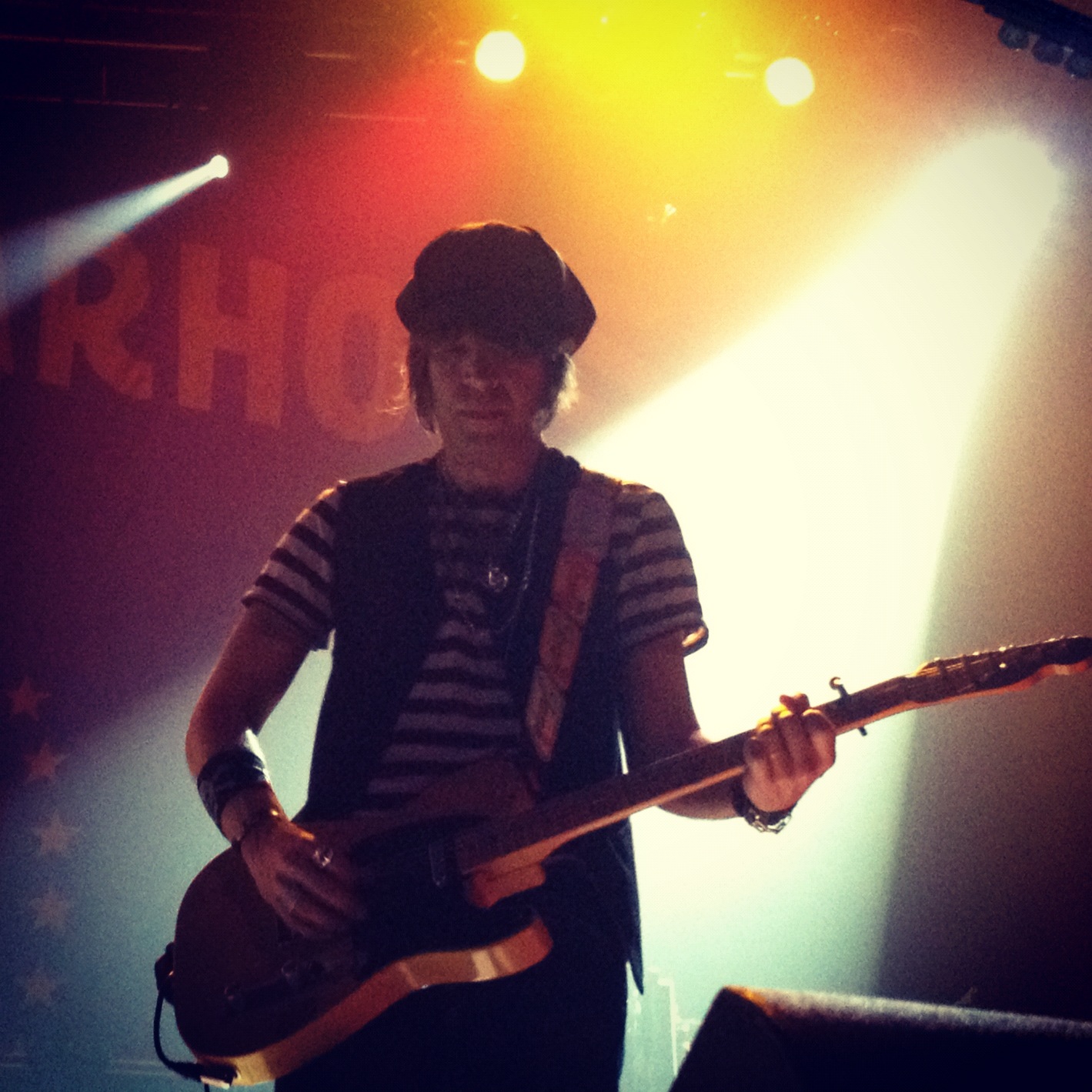 The thing I love about seeing The Dandy Warhols live is that the space between songs makes it feel like you’re almost watching them at rehearsal. Front man Courtney Taylor-Taylor, especially, really gets into the songs as they were just performed and the setlist as it plays out (he commended Zia McCabe that night for the particular order she selected). Wearing a bun atop his head, he’s the ultimate stoner rocker, getting lost in the songs as he plays.

“I never thought you’d be a junkie…” The Dandy’s music is so varied, it mimics the rollercoaster of life. We danced along to the poppy sounding but heavily themed “Junky” before diving into the almost uncomfortably obsessive “I Love You”. For “Good Morning”, I immerse myself in the subtle intricacies of Peter HolmstrÃ¶m’s guitar playing. I think he’s highly underrated, I love to watch the way his playing really takes each song to a new area of the spectrum. CTT plays “Every Day Should be a Holiday” alone while the others leave the stage so “Zia can have a potty break.” 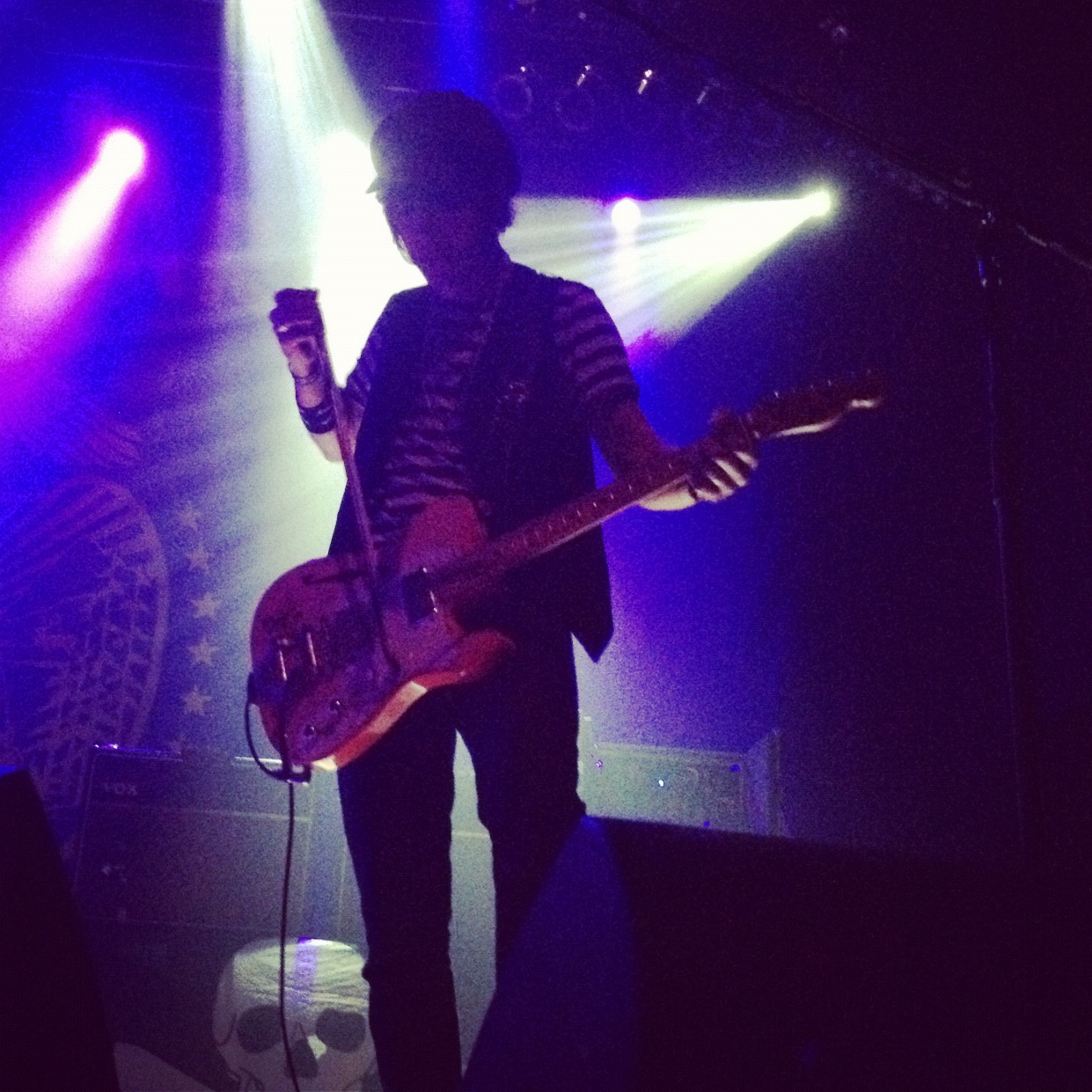 “The next song is one of my favorites” says CTT before launching into “The Last High”. One of my favorites is “You Come in Burned”; a disorienting song that feels like I’m floating in a black lake. Faster and heavier for “Horse Pills”, we’re dancing to the rock/rap. “All I want to do is get off” we sing, but I was with this set.

I had waited to hear the new songs in the live setting, and they melded well into the set. I really liked “Autumn Carnival” musically, but “I Am Free” lyrically hit home.

And when all of my friends forgive me of the worst Iâ€™ve been
Do they let me back in so I can begin again?

And now I am free”

And then “Well They’re Gone” features HolmstrÃ¶m implementing the bow on guitar move…always a winner in my book! That song sounds very different for them; yet another new space of music for The Dandy’s to inhabit.

The e-bow on “Godless” always gets me, that form of distortion so pure it pulls at my heartstrings. But it was “Pete International Airport” (which is also HolmstrÃ¶m’s side project – check it out!) into “Boys Better” that was the highlight of the night. That whole sequence is a total trip of pop/psych/rock, and HolmstrÃ¶m goes full Angus on guitar with his windmills. “Boys had better beware!”

Instead of leaving for an encore, they took a request from the audience that was nicely typed up on a sign by a girl in the front. “Gold Dust” was the surprise of the night, followed by “Country Leaver”, appropriate for their last night in Texas. I love the country guitar in this song.

I’ve had people call me out for loving bands like this when I’m into a lot of metal. I don’t care if it confuses my readers; good music is good music, and you should never apologize for liking something. Or disliking it, for that matter.