Once upon a time, there was a teenage girl who was into rock music. Her room’s centerpiece was a stereo system, otherwise decorated with Rolling Stone magazines and posters of musicians on the wall. She hand-painted her converse, wore hand-me-down clothes, and had self-dyed hair. While she was friendly with the jocks, the preps, the nerds, the drop outs, the thugs, and even the huckle bucks, she was mostly a loner. She always dated the wrong guy. She drove a fast car with a custom speaker system and had a giant binder filled with CDs. She occasionally snuck away to the big city for a concert.

I walked into the Regency Ballroom feeling off already. But as soon as I saw the Dommin backdrop on stage, I smiled. This would be my fifth time seeing Dommin. Since discovering them early last year, and interviewing Kris Dommin, they’ve been touring nonstop. What’s cool is that nothing has really changed about Dommin’s set since last year- the way they look, the roses, that backdrop- it’s only been the number of screaming girls that has increased. I’m so happy for them.

Screaming girls. I never was one. As I look around me, I realize that I’m surrounded by pairs of BFFs, holding onto each other in some sort of embrace of mutual rock star admiration. It’s such a fascinating study of behavior, the way these girls both cheer each other on and somewhat compete with each other at the same time. I was so involved in this ethnographic crowd study that it became more of the show to me than the actual show.

As Dommin came onstage, opening with ‘New’ into ‘My Heart, Your Hands’, I watched the crowd. The way the ones that already knew them swooned, and the way those that didn’t were converted. It’s a really powerful thing. When it comes time for Kris to remove the first rose from the keyboard to throw into the crowd, I watch the girls turn on each other, hissing with claws out. I hope they remove the thorns. Dommin’s current cover song in their set is ‘(I Just) Died In Your Arms’, which was great, especially with their gothy take…..better than ‘People Are People’….but I still preferred when they did ‘I Want To Know’ when I first saw them. Kris told the crowd that they’d be around merch and in the crowd all night, and want to talk to each and every one of us…..which got a deafening girl roar. They finished up the set with the fantastic ‘Without End’. Kris threw out the rest of the roses, starting mini girl mosh pits wherever they landed.

You know, I kinda thought that maybe they’d do a Type O Negative song in honor of the recently deceased Peter Steele. Oh well.

Next up was We Are the Fallen. As soon as the female singer hit the stage, I instantly recognized her, but could not place her at all. I spent the entire set trying to remember where I had seen this band before, and it was freaking me out that I couldn’t recall anyone else in the band, or when and where I might have seen them. Have I really reached that point where I’m starting to completely forget shows? Their music is really not my style, but still. They had two covers in their set, a rather enjoyable ‘Like A Prayer’ and a less enjoyable version of Iron Maiden’s ‘Flight of Icarus’. That should have tipped me off, but it wasn’t until researching this piece that I realized that the vocalist is Carly Smithson, from one of the two seasons of American Idol that I’ve watched. HAHAHA!!! Whoa…..and the rest of the band is from Evanescence and Static-X. Weird….anyway, the girls really loved her, and I think she seems like a good role model type. The guitarist kept coming up the the corner of the stage where I was standing, and that would cause the girls to shriek even louder. At some point during the set, someone entered or exited the dressing room, causing the girls in front of me to nearly faint with excitement.

Before the main set, I was given ample time to eavesdrop on the conversations around me. The girls in front of me with X’s on their hands adjusted their clothing as one proclaimed the she would flash Ville. The girls behind me plotted to get in front of me. The girl next to me that had obviously dragged her boyfriend with her informed him that she hoped ‘her boyfriend’ would come to this side of the stage.

When the genius that is the Heartagram was revealed on the drums, the excitement level went up another level, and I told myself I would try to hang in there for four songs.

When H.I.M. came out on stage, all hell broke loose. “VILLE!!! VILLLLLLLLLEEEEEEEEE!!!!!!!” they screamed. I’m looking at this guy up there, and I’ll admit, I kinda get it. The Scandinavians have good fucking genes…..if my biological clock goes off someday like I read about and I haven’t met Mr. Right yet, I’m definitely spending a summer in Scandinavia. But I’m listening to him sing, and watching his stage presence, and I’m literally scratching my head.

Security has their hands full. Dealing with raging males at a metal show is one thing, but girls in the midst of rock star hysteria is an entirely different matter. I’ve had my fair share of rock star crushes and all, but you’ll never find me screaming their names clutching onto my best friend, trying to crawl my way over the rail, not even when I was a teen.

Song 2. What is going on? It sounds the same….not sad, not happy, not fast, not slow….maybe there are amazing lyrics that I am not getting. I’m starting to get really uncomfortable. I feel like everyone is in on something that I’m too dumb to understand. These were the girls with Tiger Beat, lipstick stained NKOTB posters, friendship bracelets, and mall clothes that I went to school with. Maybe for these girls, it’s US Weekly, Fall Out Boy, and Hot Topic. Whatever it is, I did not belong.

As I turned to leave, the girls behind me gave me a look that started out as ‘what the fuck is she thinking?’ that quickly turned into a mad dash for my spot. Wriggling my way out of the crowd, I passed the neglected boyfriends area. I shot them all sympathetic glances.

And then she lived happily never after. 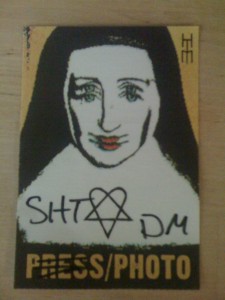