My friend and I are finishing up a chocolate souffle and a glass of champagne all the while enjoying fewÂ live dealer casino online games on our phones at a French restaurant overlooking Las Vegas in Mandalay Bay when something catches my eye. A table of women near us get up to leave, stumbling in their high heels and mini skirts with botox-blank faces. ‘Eyes of a Panther’ starts playing in my mind.

Steel Panther has been on my radar for some time now. I can remember the day the video for ‘Community Property’ released, quickly spreading like….syphilis through the interwebs. But I don’t think that I ever had a clear understanding of what Steel Panther is; is it a joke? Is it a cover band? Or are they serious?

After picking up our passes at will call, we joined a rather sizable line featuring a hodgepodge of patrons. There were some fratty guys dressed up like the band, bachelorette parties, couples, metal dudes, and some of your typical Vegas tourists who somehow stumbled into this show. And then of course there was us, in our outfits that managed to transition nicely from fine dining to metal show. 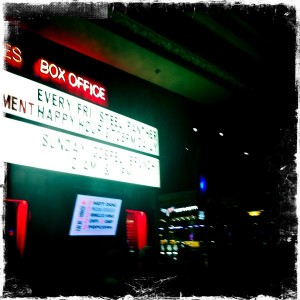 When the show began, I was transformed into a giggle box. The outfits, the moves, the music…there is a lot to make fun of in the ’80s hair metal genre. Add heckling the crowd on top of that and you have a full on metal tinged Vegas act.

For some reason I didn’t realize how over the top vulgar the show was going to be….it takes a lot to shock me, but there were some moments were my mouth flew agape. And once they started bringing the crowd into their jokes, I found myself shrinking back into the shadows.

They play as many covers and they do original material. During their songs, their over the top videos would play on screens at the side of the stage, generating extra laughs even though they were disturbingly pixelated. Once they got to ‘Community Property’, girls were brought on stage from the crowd, and were promptly made fun of. And there was really no limit to what they would say, and apparently no limit to what these girls would take. It was hilarious to watch people’s reactions to the commentary. 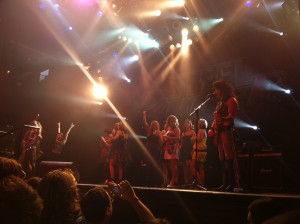 Lead singer Michael Starr starts reading off a piece of paper, calling someone on stage. A guy appears, with his lady friend trailing him. There’s some confusion, but it turns out that this is a marriage proposal. A MARRIAGE PROPOSAL! I thought it might be fake, but it ended up seeming pretty real. They request ‘The Shocker’ and celebrate on stage through it. How romantical….they were doing the hand motions and everything. 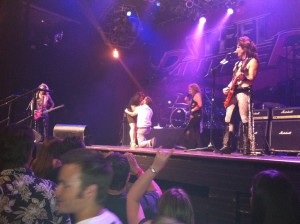 Somewhere between watching bassist Lexi Foxx primp in the mirror and guitarist Satchel lick his guitar I thought about what it would be like if I wrote this site in the height of hair metal. I mean, I think I would have a much tougher time working my melodramatic life into a piece about Warrant, W.A.S.P., or Cinderella….but there would be a plethora of aesthetic elements to discuss. 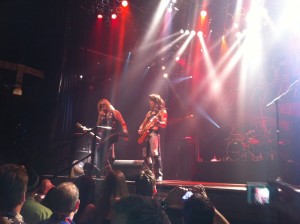 As the show started wrapping up, I began to wonder how Steel Panther came to be. Were they entertainers first, musicians second, or the other way around? Their musical talent is as good as their comedic talent. It must be interesting- and exhausting- to play multiple residencies in multiple states like they do.

And then that moment I was trying to avoid happened: the singer points at me and starts talking about my toes and my eyes and I’m bracing myself for the punchline…..and then there isn’t one. WTF?! Not sure what happened there…I was hoping for some good blog fodder…but, thank you for not making fun of me.

Finishing up with G ‘N R’s ‘Paradise City’, it was nearly 2am before we walked back out into the casino. While it felt more like a comedy show than a concert to me, seeing Steel Panther in Las Vegas went together like chocolate souffle and champagne, or hair spray and spandex….it just works.