As I walked into the power plant on day 2 of Austin Psych Fest, I pondered the whole festival thing. 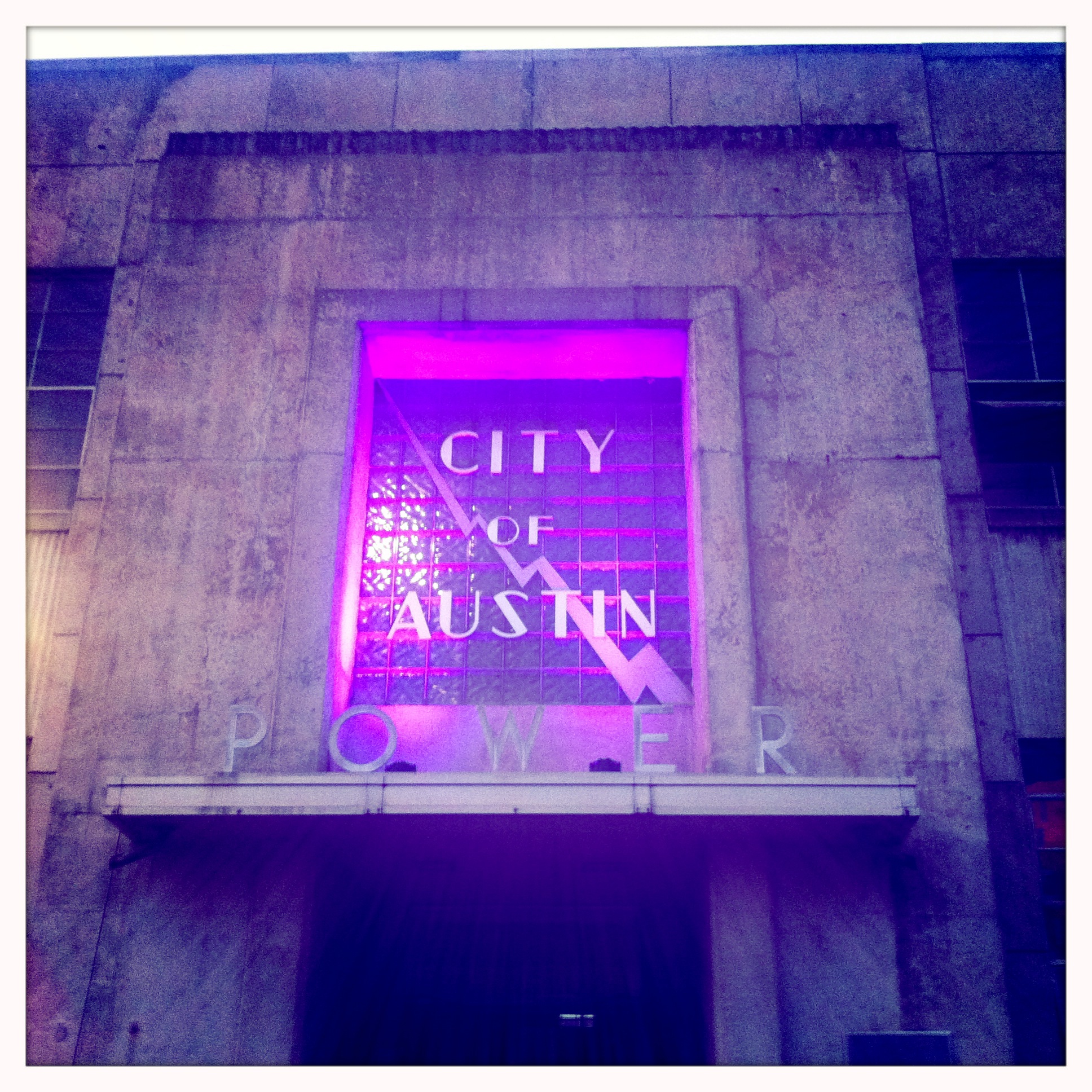 My infatuation with the idea of the live music experience started at an inexplicably young age. When I learned about Woodstock and Monterey Pop I asked my parents if they were there, and when they told me no I was highly disappointed….like, how could you NOT be there if you were the right age at the right time? Those festivals by virtue of the bands that played those festivals were the epitome of cool for me, and I desperately wanted my parents to be cool so that, you know, they could teach me how to be cool and I could attend a festival like that as soon as I could dress and feed myself properly. OK, so maybe my dad did see Roy Orbison in a dance hall in East Texas and my mom was there when ZZ Top began, but whatever…that was not Janis Joplin and Jimi Hendrix!!

It would be pretty early in my concert going experience that I would decide that festivals were not as cool as I had imagined, and that I’d rather see my music in the more intimate and intense small venue. But I do have to say that as I walked into that power plant, seeing the familiar layout and familiar faces, I remembered that there are things that I like about the festival experience. When you go to one show for a few hours you don’t really have time to develop a bond with the people and place whom you are sharing the experience with. Granted Psych Fest is a very small festival, but the setup is the same.

It was very hot outside and I had spent the day on a bit of a coffee shop tour meeting up with several friends and remembering how much I love Austin. The power plant absorbed a lot of that heat, and it was steamy inside. 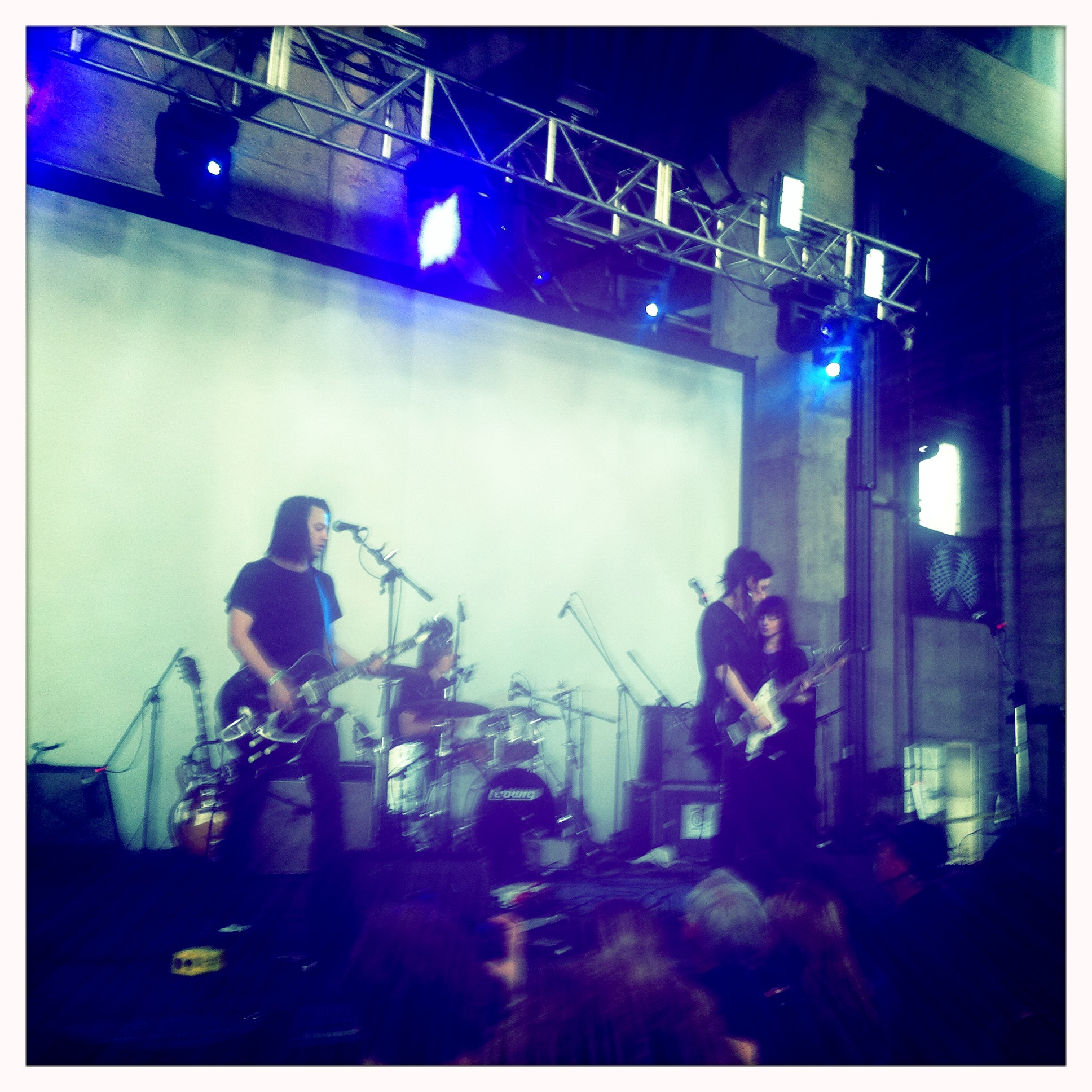 I’ve been aware of The Black Ryder for a long time, but since they live way over in Oz, this was my first time seeing them. They totally lived up to expectations. Their semi-goth appearance was an interesting contrast to the light streaming in from outside. I like that their vocal duties are split between the two guitarists; it gives the dreamy music a bit of variance. I had heard of this band because several bands I love are into them: Black Rebel Motorcycle Club, Brian Jonestown Massacre, and The Black Angels, and I immediately got it. They just have that vibe that you look for but can never describe. 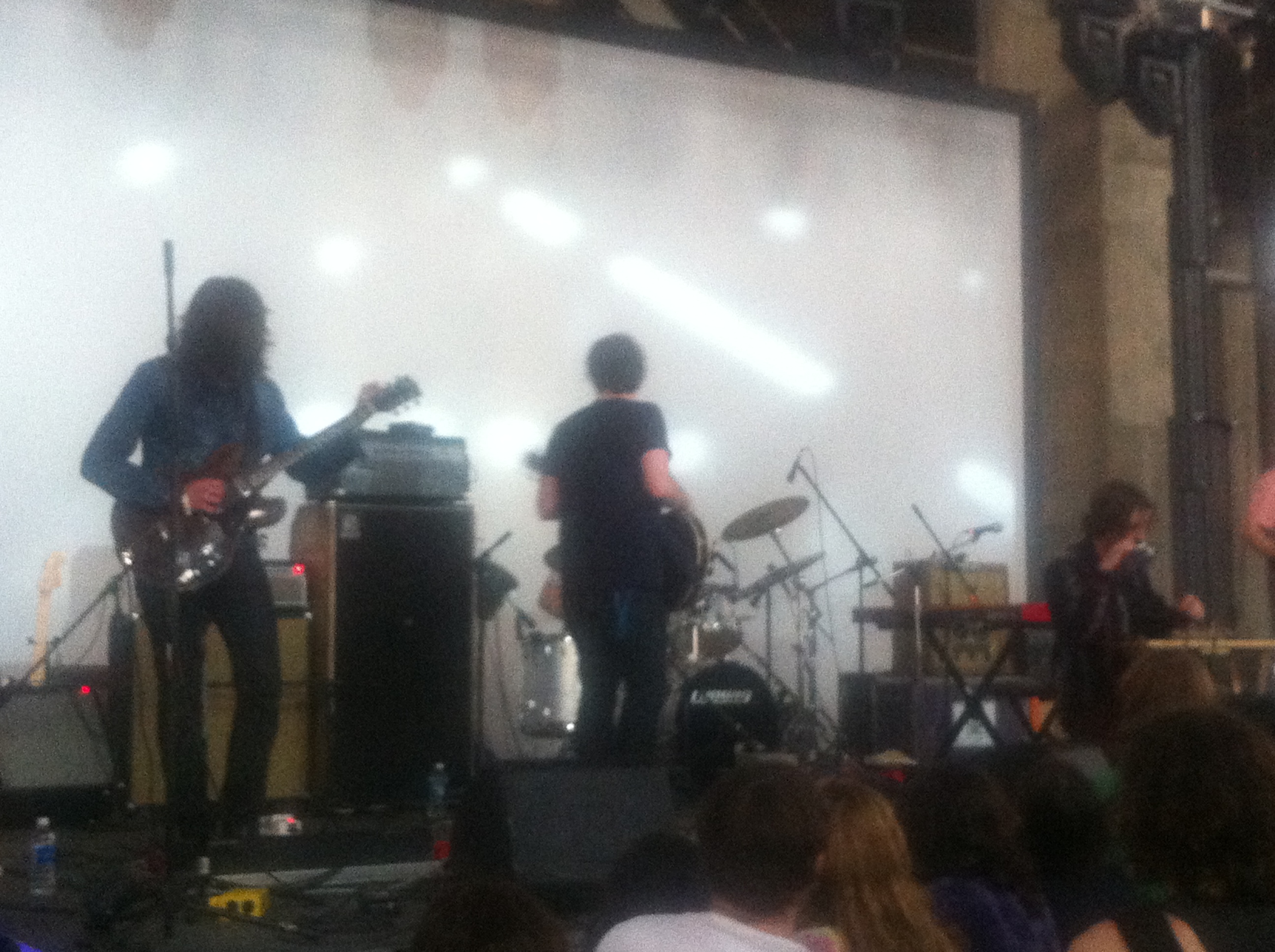 Next up, Sleepy Sun from San Francisco. I don’t recall this band from when I lived there so they must be pretty new. As Austin and San Francisco were the hubs for the initial psychedelic music scene, it makes sense that so many bands today are still from these two cities. I enjoyed the set; their funkier psychedelic sound stood out. There were some scorching guitar solos in their songs.

At this point we went outside to get some fresh air. As I went down the steps I saw a group of guys that caught my eye; it took me about 5 seconds to register that one was Peter Holstrom, guitarist for one of my favorite bands, The Dandy Warhols, and another was Joel, mr. tambourine man for Brian Jonestown Massacre. Now, I just returned from a month in Europe and didn’t have time to research all of the bands, so I spent a bit of time trying to figure out if they were just there hanging out. But I soon learned that one of the bands playing the next day, Pete International Airport, is Holstrom’s side project. And that was when I got a wee bit excited; and Sania got to experience a rare sighting of me fangirling out in a corner unable to make any sort of conversation. 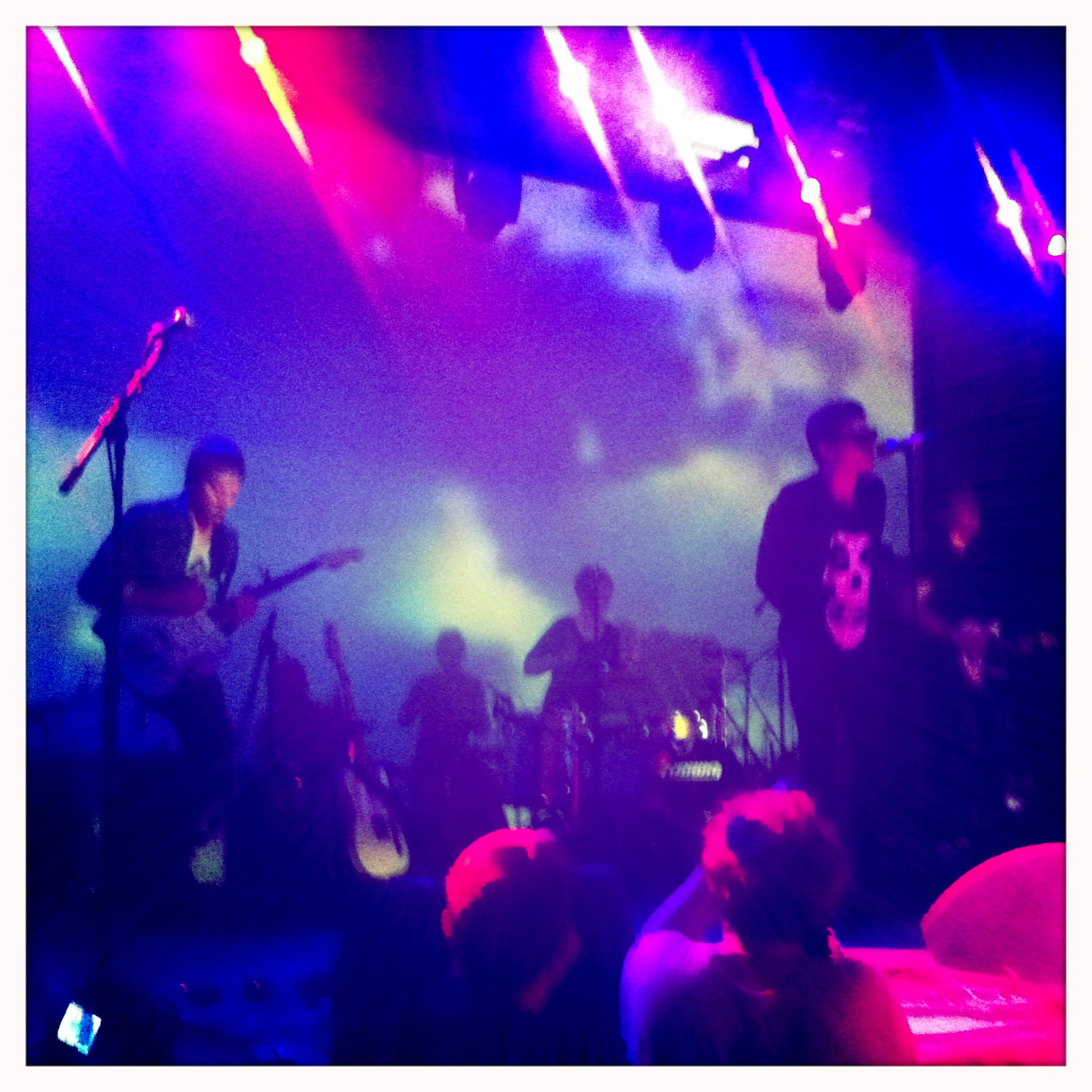 Back at the main stage, it was time for Crocodiles. I’ve seen this band go from two dudes and a drum machine to a full on band. They have still kept their same raw energy and nice dance moves. ‘Summer of Hate’: love that song. 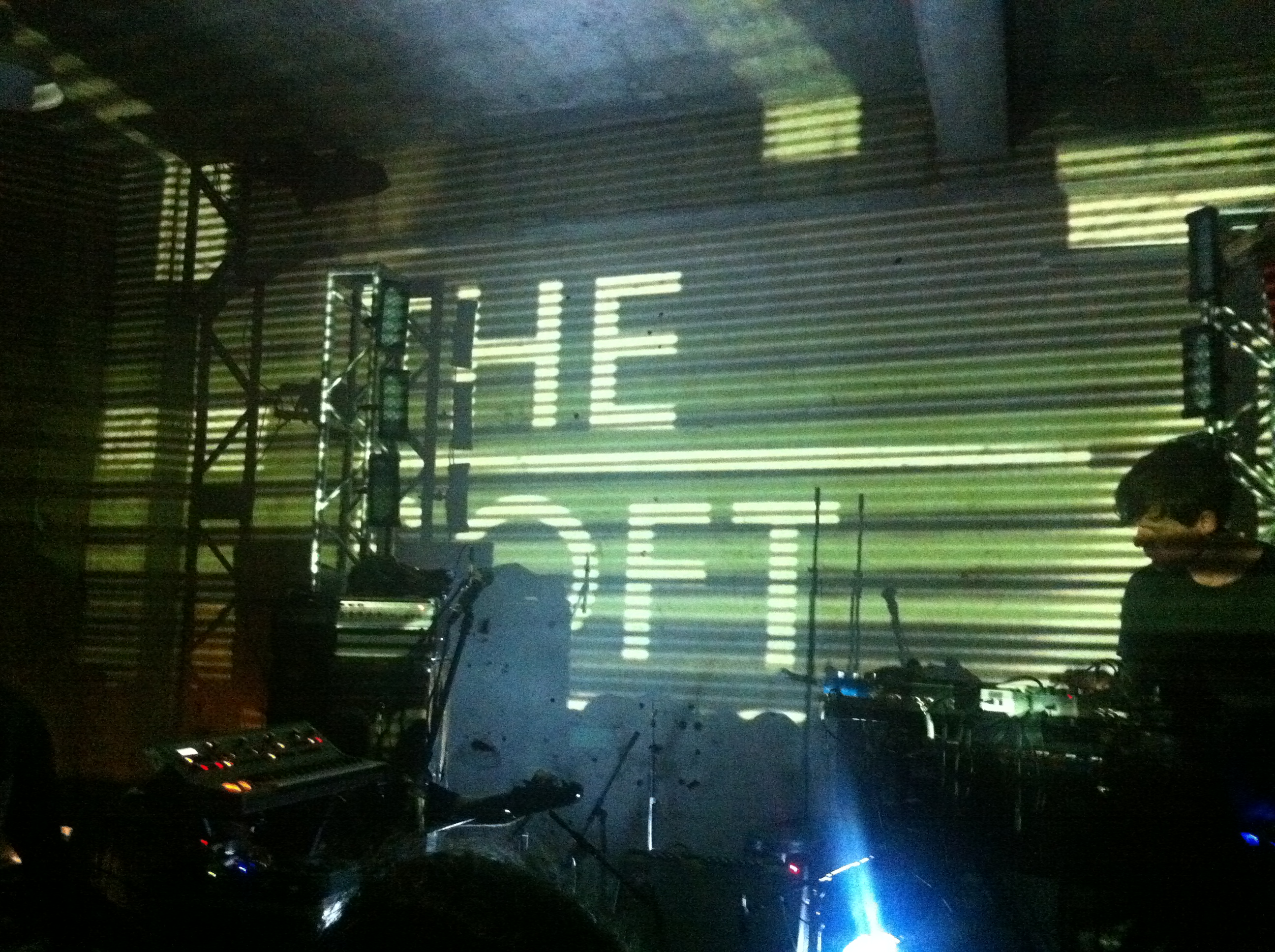 The Soft Moon were probably the most buzzed about band at the fest; it seemed like everyone I talked to was recommending them. Also from San Francisco, they broke the loop of background visuals by sporting their own logo behind them. Whenever I hear about a band a lot I enter into the set with expectations, and while I could see what all the hype was about I have to say I was a little disappointed. They definitely have a sound that I like: electronic infused psychedelic rock; darkbeats and reverb. But I found the electronic elements to be overly simplistic and repetitive to the point that it drove me a little crazy like when something mechanical starts squeaking. I was willing the music to move on at times; some songs were better than others but most made me want to yell, “ok, now go somewhere with this and you will win my heart forever!!!!”. Or perhaps, something strange will happen and I will like them recorded better than I did live.

I watched a bit of Black Moth Super Rainbow, who shares the same ninja drummer as Tobacco, so I realized those two projects are related. Seriously, a ninja drummer: genius! 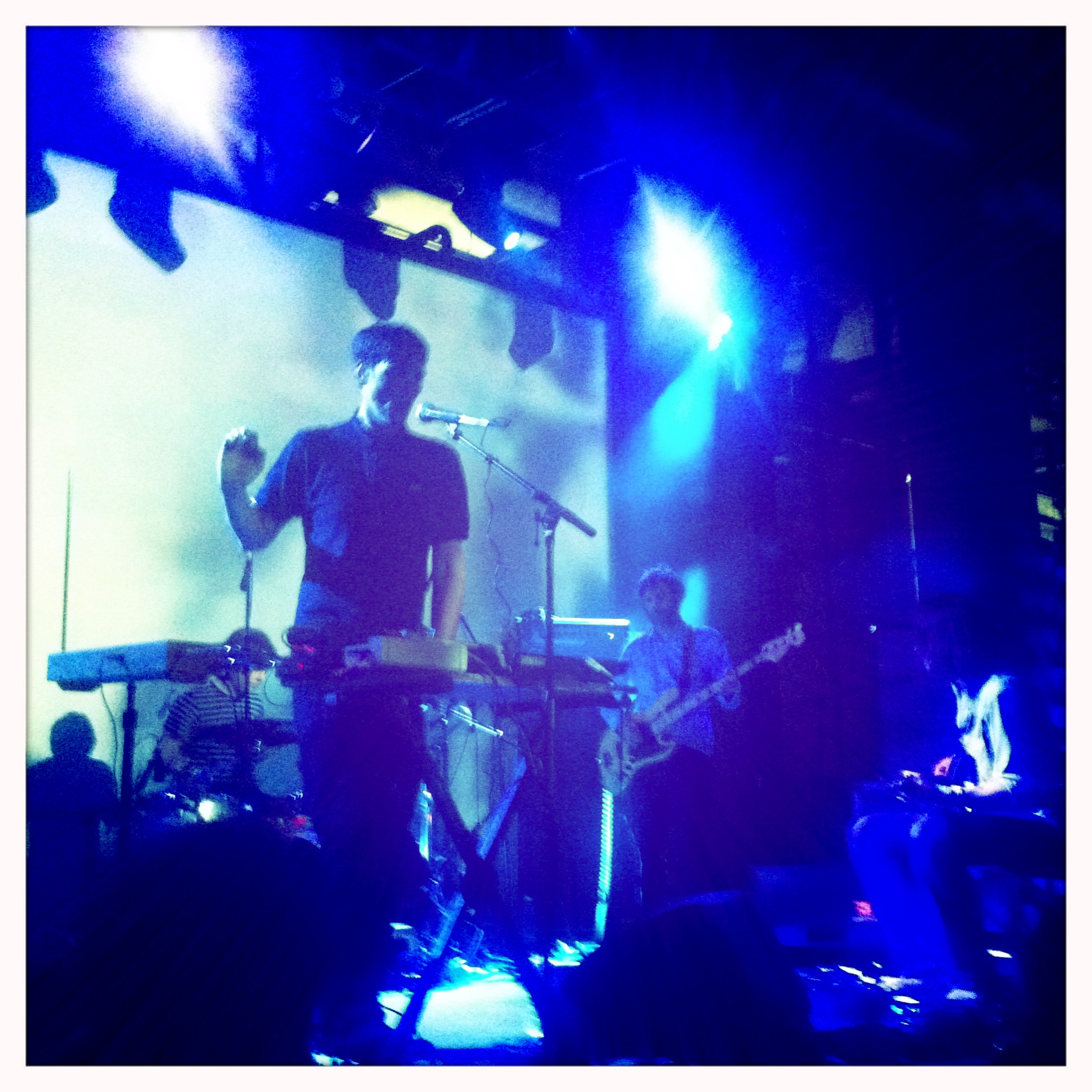 Spectrum closed out the main stage. I had sort of seen them once before, opening for My Bloody Valentine, one of the most controversial pieces I’ve written. I understand that this band has been highly influential to many of the other bands playing the fest; but my music geekdom is not nuanced enough to fully enjoy them. 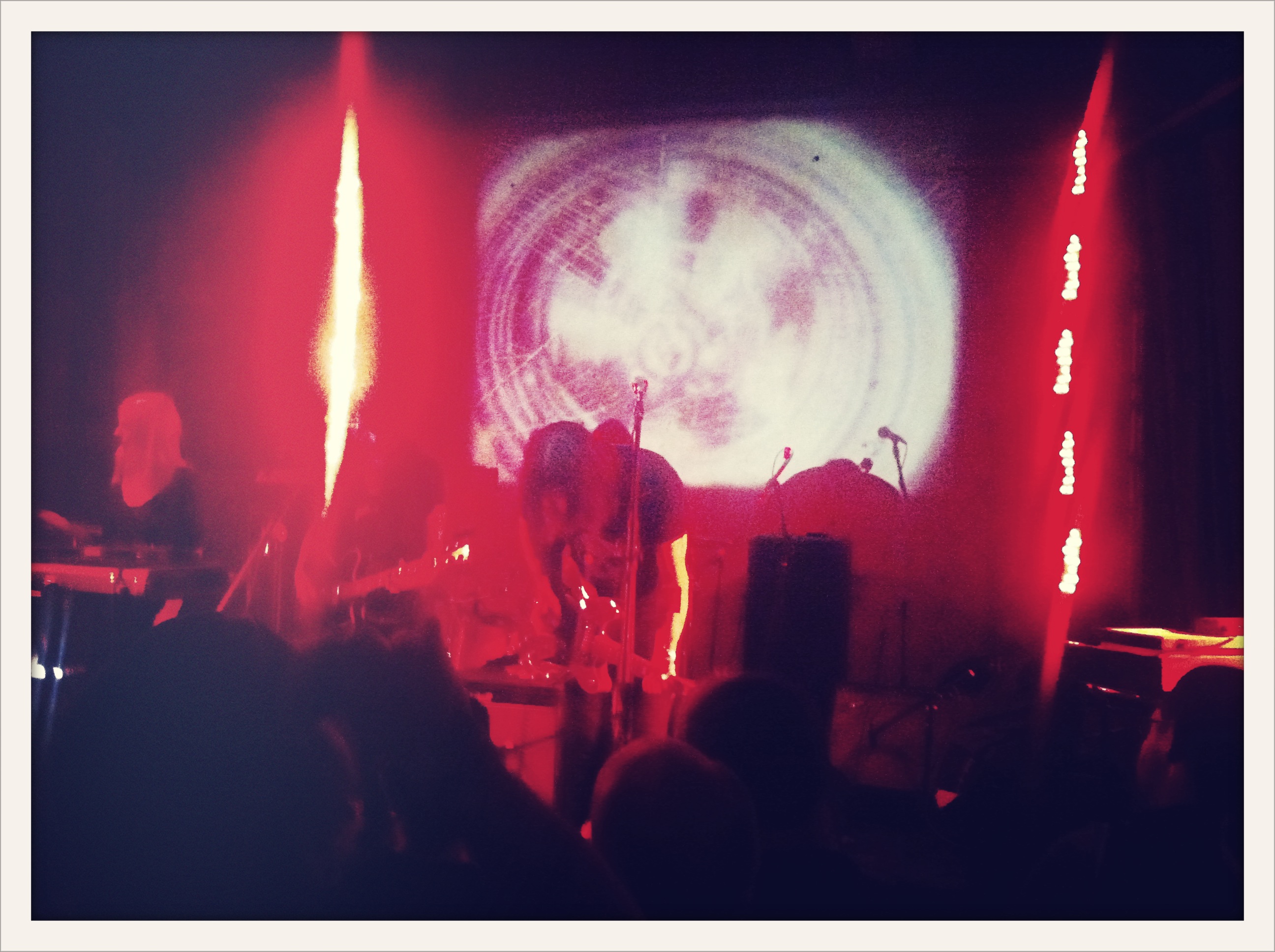 Afterwards, I caught The Meek on the second stage from about 2-3am. I’m glad I did, because they were one of my favorite discoveries from the fest. Like the first band I saw that day, they also have split male and female vocals. Searing guitar and pounding drums just sound best in the middle of the night. And it was weird to look around at the handful of us that could hang this late, and see a lot of the musicians that I’d seen on stage earlier enjoying the show as well.

By the end, even though I hadn’t had a thing to drink, all of the distortion, the heat, and standing made me feel crazy, but I had a long drive home ahead of me. Once I got to the middle of nowhere, I had an incident with a drunk driver that really tested my ability to handle weird situations. But I’ve gotta say, going from 65 to 100 to 20 is best done with this playing very loudly: