You will never understand what Madonna meant to a little girl unless you were born around 1980. 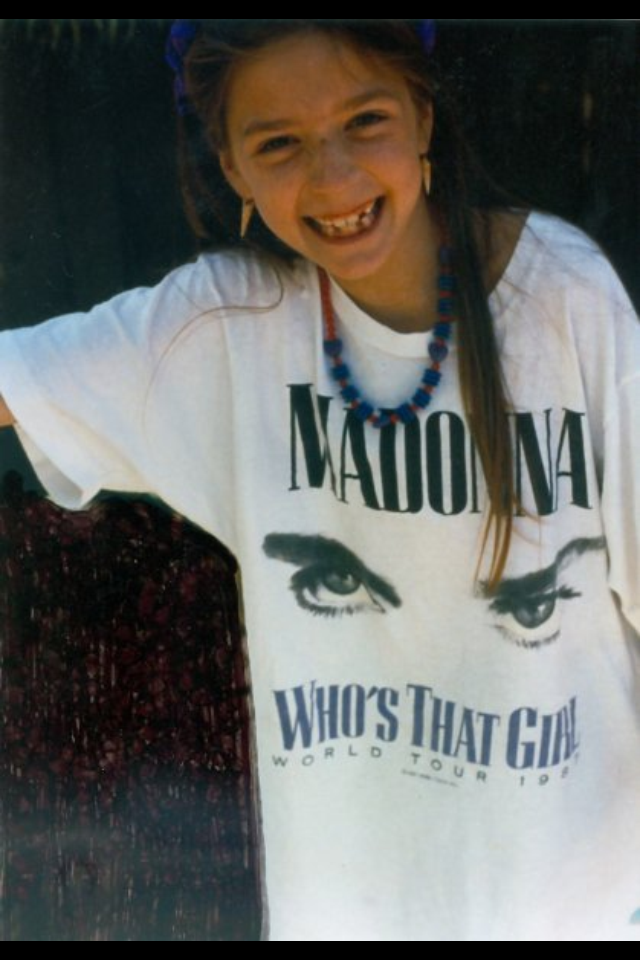 What’s above is an admittedly embarrassing picture of me at either 6 or 7 years old wearing a 1987 “Who’s That Girl?” World Tour t-shirt that is much too big for me.

I did not go to that tour.

Probably within that year, I visited the magical Sound Warehouse next door to my parent’s gun store in Houston, TX and somehow walked out with this:

That is a Papa Don’t Preach 45 record that went in my Fischer Price or something like that record player. It was definitely one of the first pieces of music that I owned. At this point in my very young life, music was something that was made for me to dance to, and in 1987, Michael Jackson and Madonna were IT.

When you are in your late single digits, your world is really small. Especially when you are an only child. And there was nothing more bad-ass than Madonna. I looked at her like the cool big sister I always wanted. I think it’s fortuitous that she was the most mainstream thing that happened to make it’s way down to me and infected my emerging personality in ways that would potentially shape the rest of my life. I mean for a pop star, Madonna was pretty fucking cool. She wasn’t sickly sweet, she was edgy…rock & roll in many ways.

I have several distinct memories of Madonna after obtaining that 45 and that t-shirt. Dancing to “Lucky Star” with my Madonna-lookalike dance instructor in a studio wearing scuffed up jazz shoes and a scrunchy. The song “Vogue” and her role in Dick Tracy, and rewinding the tape over and over to hear that song. Seeing a risque photo spread of her in a friend’s mom’s Vanity Fair. And then walking into a Hastings music store and seeing the large yet decidedly off to the side display of her book “Sex” that my parents wouldn’t let me go near, but I snuck over to anyway.

I guess you could say that, in a Texas society that dictates you’re supposed to do things a certain way, and with parents that let me watch all the bloody gory horror films and westerns that I wanted to, but made me leave the room for sex scenes…Madonna instilled in me that it’s ok to feel like I don’t want to be a part of all that. Madonna taught me that I could be empowered by rebelling.

Fast forward many years, and somehow, at age 32, I still had yet to see her in concert.

This was my time. I happened to be able to get a great ticket from a friend who unfortunately had to sell hers, and finally, my little girl dream was going to come true.

It is not a cheap ticket….in fact, out of the hundreds of shows I’ve been to, it’s one of the most expensive ones I’ve ever purchased. But as I boarded what ended up being a private shuttle from parking to the Staples Center…I didn’t give a fuck! I was by myself in a sea of people, but for some reason this felt like it was exactly how I was supposed to experience this moment. As I walked into Staples, a father/son duo stopped me, looked me up and down, and the father said, “are you too old for my son?”. I looked at the son, who was not mortified enough by this fatherly gesture, looked back at the father and said “yes..I’m not into that cougar thing yet.” And then he said, “Oh come on! You look like you could teach him a thing or two.”

Oddly enough, this did not offend me as much as it should have. I smiled and walked away, noting how this was the perfect beginning to the Madonna experience. She was a driving force in getting me to connect with my sexuality, and, while I’m far from a slut, I’m definitely not a prude…and I realize that comes across in my physicality. And I own that.

Madonna did not come on until 10:30pm…late for a large show like this, so I had a lot of time to people watch and take in DJ opener Martin Solveig. He had one of Madonna’s sons come up to “DJ” and dance with him, which was cute. 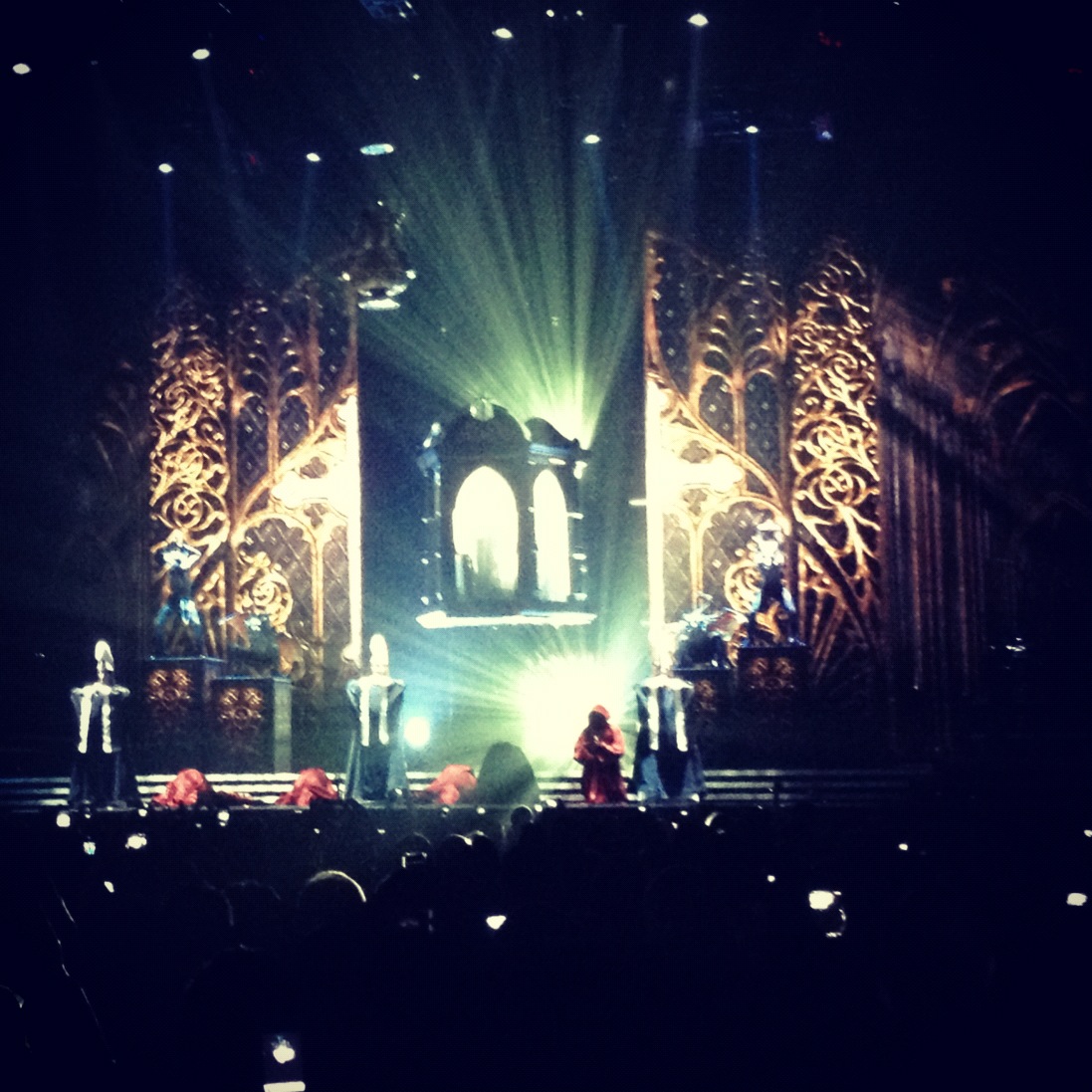 OK, seriously, the lead up to the meat of this post is almost as long as the time it took me to get to this point of finally seeing her.

Went the lights went out, and a church setting with pope-like figures came on stage…for a second I thought only of Ghost…until I heard her voice.

At first it was hers….and then it was mine. And I hate that phrase, I’m not religious, why would I say that?! But it’s honestly the only thing I could think of when I realized she was RIGHT THERE! I’ve only gotten ‘I’ve lost my mind star-struck’ when seeing a handful of musicians: David Bowie, Trent Reznor, and Radiohead earlier this year. This was a mythical creature finally materializing for me.

Her shadow was kneeling in a confessional booth sailing above the stage. Besides teaching me to question constraints of sexuality, Madonna also helped me to not feel ashamed about thinking religion was a bunch of boloney…I mean, what a relief to see this when you’re being forced into Sunday School! 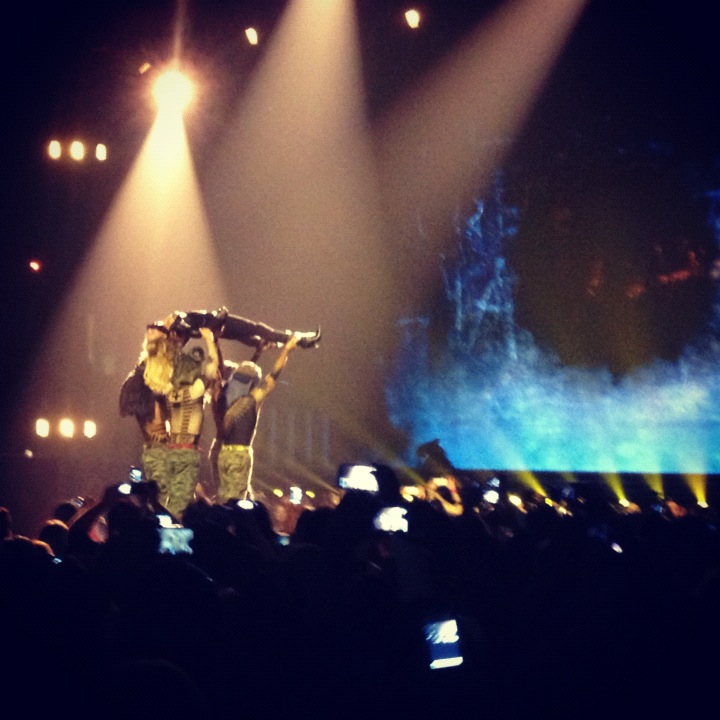 It was easy not to care that the first few songs were off her new album, the somewhat annoyingly titled MDNA…the production was so impressive. I’d only experienced the round catwalk setup through Metallica, and to be in seats pretty close to it’s apex lent an impressive view. I’m a “Girl Gone Wild”, I’m dancing like I’m 7 in my room again. 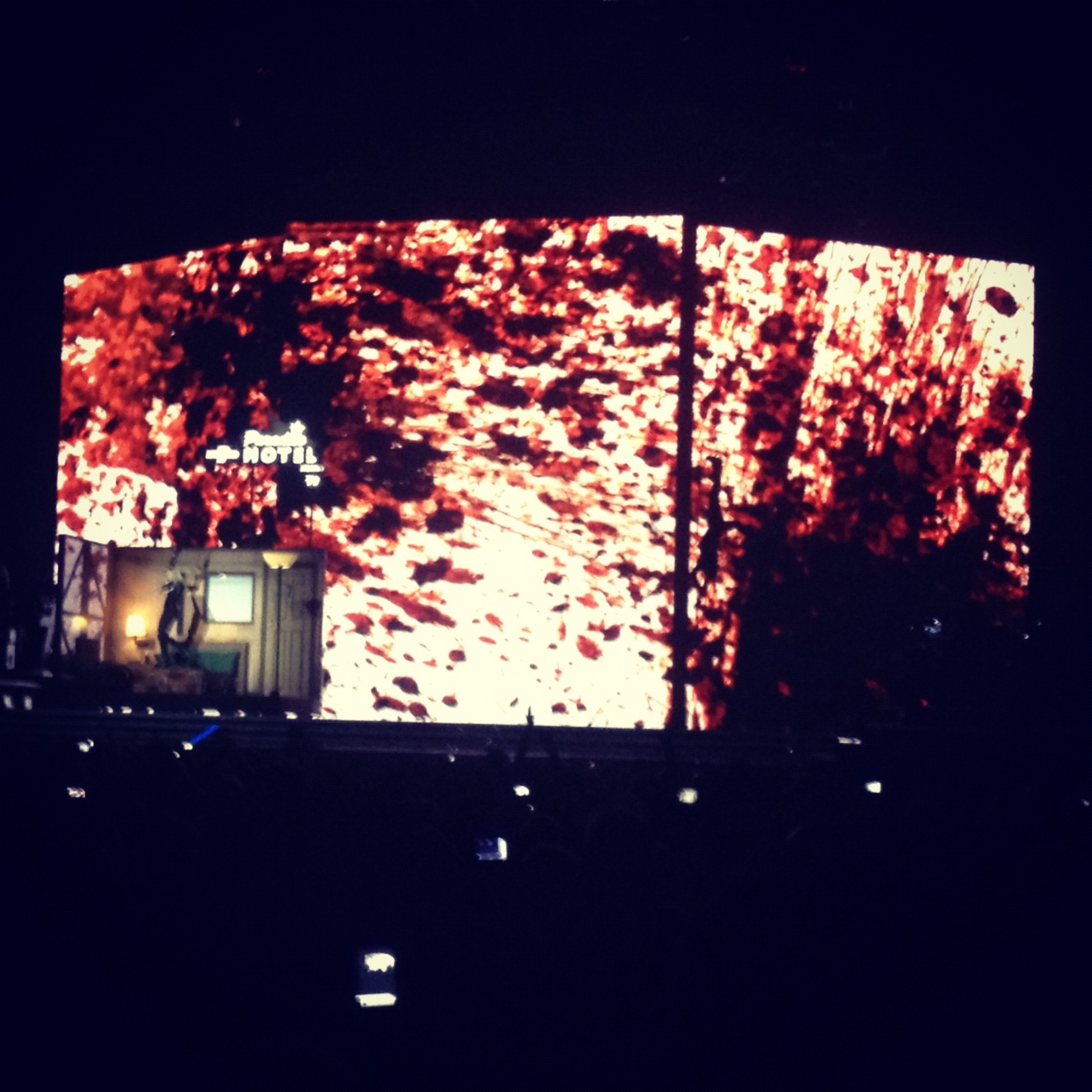 I don’t really care for the song, but the production during “Gang Bang” was one of my favorites I’ve ever seen. The blood spatter behind this ‘no tell motel’ facade was impressive…not to mention dark and pretty gory. Someone’s video:

But it was really on when she came to the front of that catwalk near me and launched into “Papa Don’t Preach”. She’s lying there, rolling around…and I’m just like…wow. It was a surreal moment to be in, very reflective and intense in the sense that I had literally been waiting for this for 25 years.

“Hung Up” is one of my favorite newer Madonna tracks, a solid dance song. I was fully enjoying this darker-toned production that made up this first act, entitled Transgression. It mirrored exactly what she represented to me when I was younger. 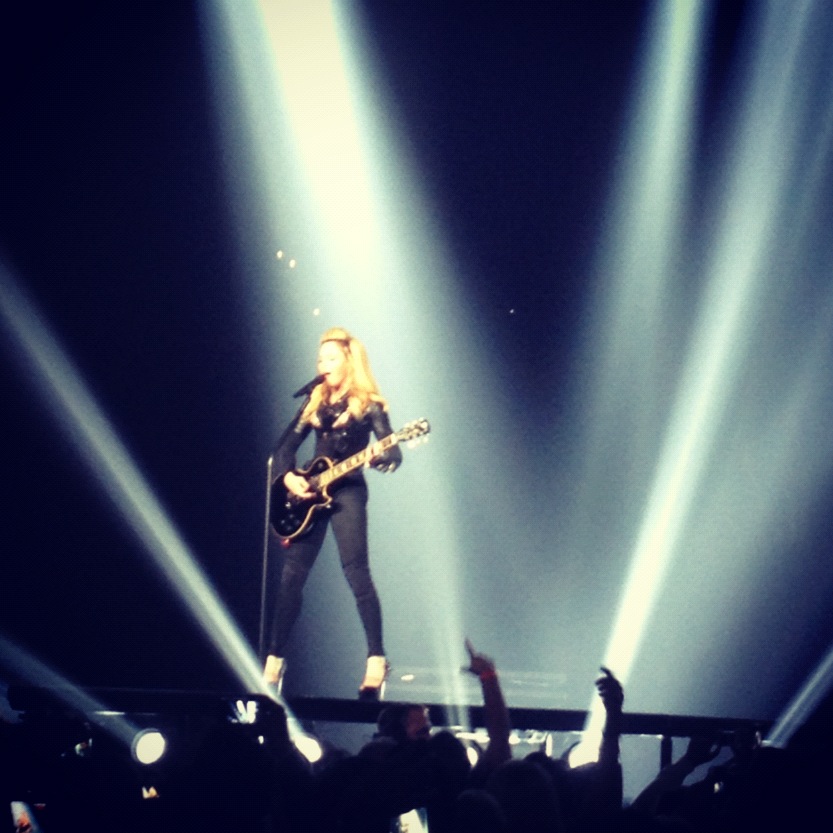 A video interlude that spanned the years brought us into Act 2: Prophecy. This is when we started to get parts of saucy Madonna, as she took a jab at Lady Gaga within “Express Yourself” by putting a “Born This Way” segment in there. I don’t hate Lady Gaga, but I definitely knew I was old when I found myself ‘not getting it’. “Express Yourself” is one of those songs I wish I would have taken the advice of earlier in life….but I do now.

Seeing her on guitar during “Turn Up the Radio” was awesome…even if she didn’t play anything crazy and even if I didn’t get to her her riff on Pantera:

“Open Your Heart” into “Holiday” sent me straight into the heart of nostalgia…making me wonder how the hell I went from this to Death Metal. Somewhere around here Madonna started to poke fun of the LA crowd. Actually it was more like scolding…she called us “jaded”…and rightfully so, but she kept going on about it. Dropping quite a few f-bombs and exuding that poised but pissed off stance that I’ve always admired, 54 year old Madge looked great. More voluptuous than the past 10 years, where I felt like she was trying to be somebody that even she is not, she was a golden goddess. It goes without saying that Madonna’s multiple reinventions over the years have also been inspirational to me, I’ve had MANY physical reinventions throughout my lifetime, with more to come. 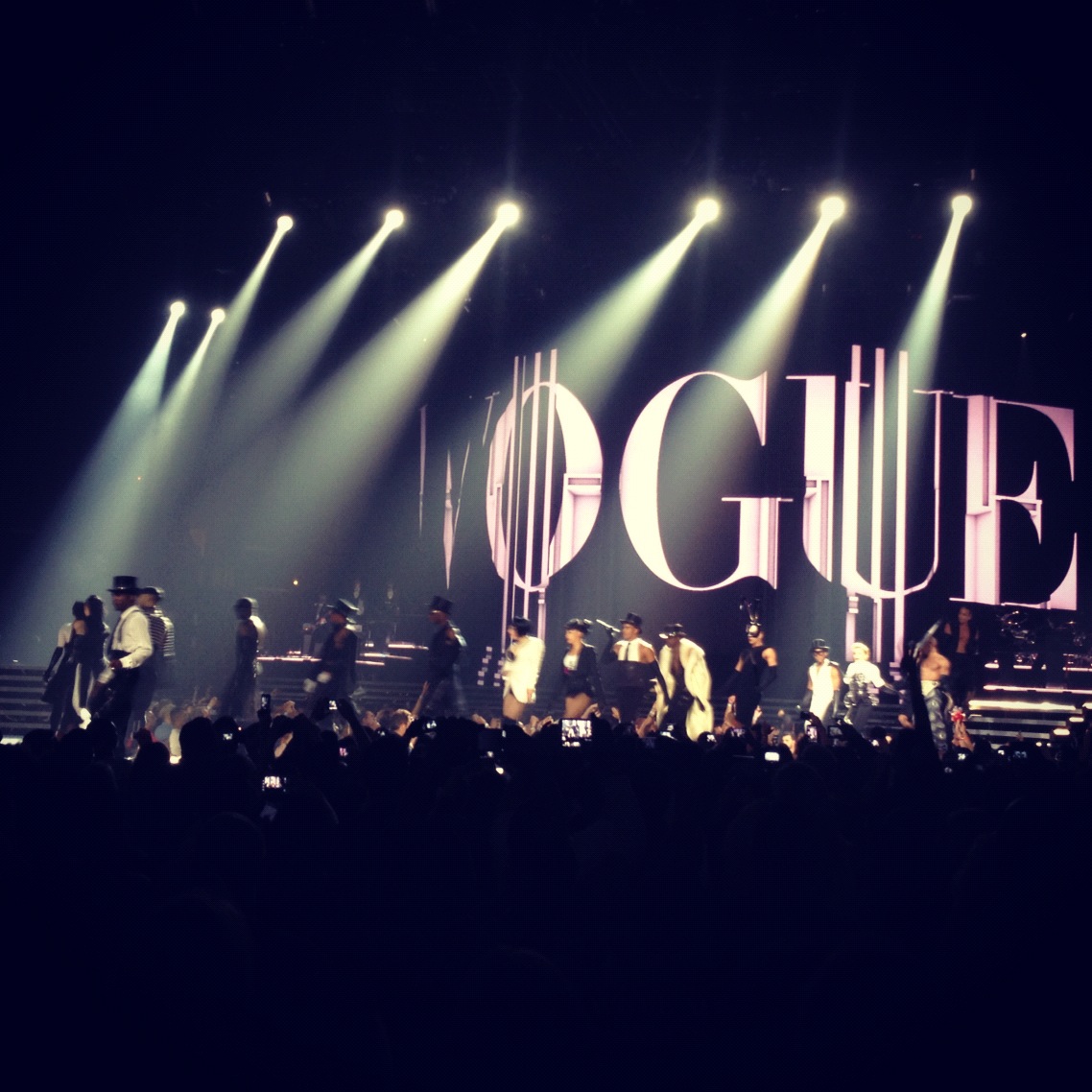 The next act, Masculine/Feminine, was the one I was waiting for the most. As soon as you hear the first beats of “Justify My Love”, I’m taken back to that magical period when you thought about sex before your actually had it. And then onto “Vogue”, where a multitude of gender bender characters prance across the stage, tantalizing the crowd. “Human Nature” was phenomenal live…and this lead into a stripped down, extremely raw and sensual version of “Like A Virgin”. Madonna literally stripped down on the apex of that catwalk right in front of us, baring her stocking and thong ass to the crowd. That, my friends, talks BALLS. Someone’s video:

The only thing I didn’t like is what followed…and I’ll say this carefully. She had MALALA stenciled across her back, and went into a speech about her. A tragic story that definitely deserves attention, I just felt the placement within the show seemed really off.

“Love Spent” was also stripped down, and featured her being tightly corseted and then crawling around a piano. I bet when that guy learned to play he never thought he’d have to play while Madge’s legs were over his shoulders!

The final act, Celebration, began with “I’m Addicted”, which is a good dance track off the new record. But it was the almost final song, “Like A Prayer”, that had the lasting impression. To hear those first lines echo through Staples, ugh, I get chills thinking about it!

“Life is a mystery, everyone must stand alone
I hear you call my name
And it feels like home.” 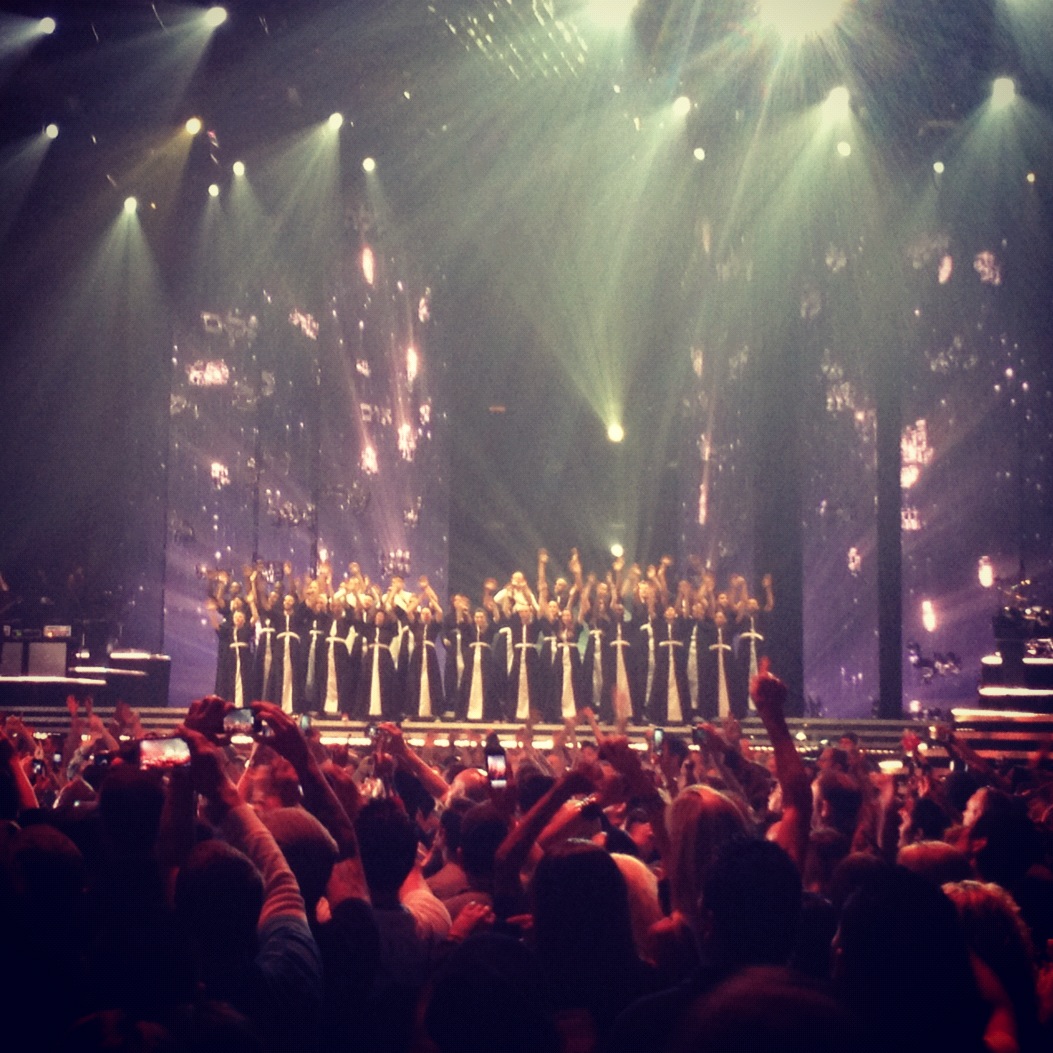 This is where I got a little teary eyed, thinking about how only my momma would understand what this show meant to me. And having that entire chorus singing along, with every being at Staples chiming in, it was really powerful.

So there you have it. 1633 words gushing about something that was 25 years in the making. From a chick that listens to Black and Death Metal.

“Come on girls
Do you believe in love?
‘Cause I got something to say about it
And it goes something like this”