It was the name that drew me in. The word ‘offend’, posed as a question, Austin Powers style….I had to check it out. And I liked what I heard. 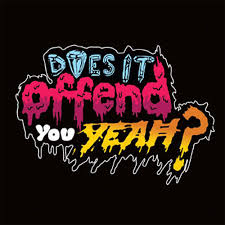 It’s my fifth night at GAMH in 2 weeks. The crowd is light but young, with a glint of angst in their eyes. As soon as the band hit the stage, they exploded. It was my first GAMH mosh pit spotting.

I hadn’t looked at images or video of this band before the show. They were not what I expected. I thought for something a bit more loud and punky, with a distinctive style. In fact, their stage presence only showed glimpses of raw energy, when I expected a frantic, slightly crude show. Their aesthetic was forgettable. The crowd made up for it, and their energy was infectious.

A few songs in, after the initial high wore off, I noticed that their sound was a bit flat. It was when ‘Let’s Make Out’ came on that I knew I was a bit let down. Not a lot, but just enough to notice. I was listening to the songs more in my head than to what was coming out of the speakers, and this is what I was dancing to.

It’s not that they sounded bad, it’s that they were too serious, and lacked the X factor. They asked for a show of hands on who stole their album, and who bought it, and pointed out that the hands were not statistically accurate. Really? That’s kind of a downer. I don’t wanna hear the word statistics at your show, that’s a work term.

Crowd surfers were flying around, and after a couple landed on stage, one of the vocalists waved off the rest. Then I realized, they are trying too hard. Why so serious? It was only at the very end during ‘We Are Rockstars’, and the encore, a cover of ‘Whip It’, that they let loose a bit more. I saw a smidgen of Aaron North style guitar action go down, but unfortunately, the knock-you-over distortion didn’t blast me to match what I was seeing.

The set was maybe 45 minutes to an hour. And that was with a decent amount of band banter. I knew there wasn’t a lot of material, but you should never leave your audience going, “well, it was only $13”.