I was chatting with a friend of mine at a show on Monday, asking him what he had coming up this week. When he mentioned Insane Clown Posse, I wrinkled my nose. He proceeded to tell me about their live show, and in my partially inebriated state, I became intrigued. One thing led to another, and somehow I ended up at the Warfield at 7pm Saturday night with my name on the list. 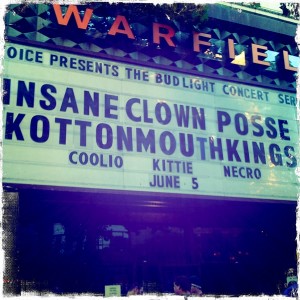 My only memory of ICP is from about 10 years ago. The monster I was dating at the time didn’t come home one night. When he did show up, and I inquired about his evening, he proceeded to tell me he had gone to an ICP concert and things ‘got crazy’. Being my young and dumb self, I jokingly asked if he had been kidnapped by clowns, and I think that was the extent of it….but looking back, he was probably fucking a juggalette.

I did not think or hear of ICP for years, until last year when they started popping up in pop culture references in unexpected places, like Saturday Night Live. They also seemed to be the butt of many jokes in the metal community. Also, ICP consider themselves horrorcore, which is the genre associated with that crazy kid killer Syko Sam that made headlines last year (who was from around here). Being the ‘I’ll try anything once’ girl that I am…curiosity just really got the best of me.

I am indeed one of those people that are frightened by clowns, though not full on scared of them. The only things I’m really scared of are falling in love and being alone forever, which could explain why I didn’t have anything better to do on my Saturday night. Oh, and body hair. I’m very scared of body hair. So, I figured I could endure being in the presence of clowns for a few hours.

The scene inside was something that I could not have mentally prepared myself for. It seemed that everyone was in some variation of a costume. The best way I can describe the general aesthetic of it is this: recently returned from a vacation in Cancun where their hair was braided, they accidentally electrocuted themselves, causing the braids to stand on end. Then, they decided to don the jersey of their favorite sports team for the game, but changed their minds and went to clown tryouts at Barnum & Bailey instead.

As I entered the main floor, I noticed that everything was covered in plastic, like for a GWAR show. The floor is shaking with the deep bass of the rap coming from a DJ, who is perched up in the VIP box that I’d always wondered about. He looks like Dr. Horrible with clown hair. I take a spot at the extreme left of the first tier, where I can be close enough to observe, but hopefully out of harm’s way. 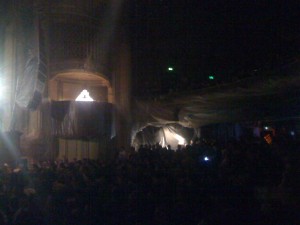 Kittie comes out as soon as I’m settled. I thought they were an interesting addition to this bill, and feared for the crowd’s reaction. It was good to see them after listening to them on and off for years. They play barefoot and angry, and with little sass that you see in many of the female metal musicians. I enjoyed watching Ivy on bass the best; she handles that piece of equipment well, and has a tremendous helicopter headbang. They are the kind of band that, after they initially come out, you forget that they are girls playing metal, as any gender bias evaporates. However, I do think that because they are girls, the crowd was more accepting of them, because they saw it as a novelty. 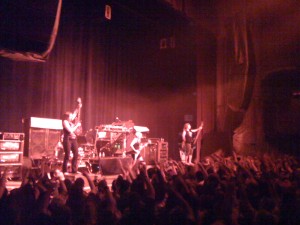 It was during this set that I really started to experience the ICP culture. Kittie started pandering to the ICP crowd- as would the other opening acts. This included some grunt-like whooping thing, the whole juggalo/juggalette nomenclature, and the chanting of ‘family’ and ‘clown love’. Apparently it was towards the end of the tour, and the support seemed to be well initiated into the clown culture- or clown cult….because that is what it felt like in there.

Coolio was next…..and I officially entered the twilight zone. Coolio tracks mixed heavily into NIN, Pantera, and Smashing Pumpkins for me in the summers of ’94 and ’95. I mean, ‘Gangsta’s Paradise’ was HUGE. In fact, I can close my eyes and remember sitting in my guy friend’s trailer (yes trailer- I’m from Texas), it being 110 degrees outside, and my friends and I are all sitting around a table with the buzz of the window unit A/C in the background and smoke heavily in the air. My friend, the biggest pothead I’ve ever known, is reading from a piece of paper. He basically turned ‘Gangsta’s Paradise’ into ‘Smoker’s Paradise’- Weird Al style. “Got a blunt in my hand and some smoke in my eye”. HAHAHA. Anyways- Coolio was brought out in a body bag, and was quickly unleashed on the crowd by his entourage of three, one of which was his son, as he mentioned like 40 times. Between songs, it looked like Coolio took swigs of honey out of a honey bear. At one point a necklace was thrown into the crowd and some girls fought over it. Towards the end of the set came ‘Fantastic Voyage’, and then a gunshot introduction to ‘Gangsta’s Paradise’, where Coolio proceeded to remove his shoes and throw them into the crowd, then his shirt, and socks….I was starting to worry that I was going to see more of Coolio than I wanted to. But there was a live sax. Seriously. And people were crowd surfing! What…. 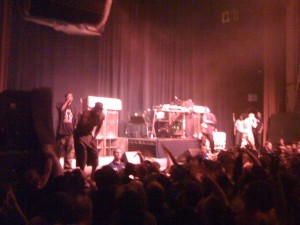 After the set, the DJ in the box perch came back out, and all of a sudden everyone broke into something called the Chop Chop Slide. This was the point when I really got scared because everyone around me was shouting “fuck…shit…pussy…ass….”

But I learned the dance moves pretty quickly. Maybe I’ll show you sometime.

Kottonmouth Kings. I had heard of them, but knew absolutely nothing about them. This tall white dude with bleached blond hair with these two weird little spikes in the front and an X drawn over one eye bounces on stage, followed by three other guys. They are all dressed in green button front shirt and shorts uniforms, with matching soccer socks and shoes, all heavily branded with their names. The heavy, old school hip hop beats are actually infectious- I will admit this- but the content…oh my god. Let’s rap about weed. Now let’s rap about sex. Weed and sex. Name drop ourselves. Now let’s get drunk. Weed…sex…..weed….sex. I inhaled the secondhand smoke from the plethora of large joints around me, hoping to get on their level for a second. Nope. It was very interesting, though, and you could tell they love NorCal, as they talked about this being the epicenter for legalizing weed, which we’re getting very close to. I will, however, cite them for a highly inappropriate use of the devil horns, and for making me talk to my neighbor as they told everyone to high five the people around them, which said neighbor made me do. 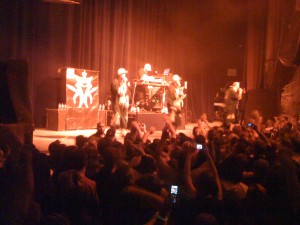 I look around me and watch the excitement brew as everyone gears up for what they’ve been waiting for. I see the dedication of these fans- the time they spent doing their hair and putting on this makeup, the money they spent on the merch. I haven’t seen such heavily branded attire since a BLS show. The girl in front of me has an ICP belt, and she is with what I assume is her mom and dad. Mom is in an ICP shirt. In fact, I’m surrounded by families.

It was then that I truly got it, I think. ICP is a perfect case study of how a band or an act or whatever they are can be successful if they have a point of view. ICP is a very defined entity- there’s a lot to latch onto when you tell someone about the band. They’ve crafted a story, and thus an entire subculture that their fans can literally buy into. And that taps into something deeper- the need to belong. I look around me and I see all these little groups of people of all ages, all shapes and sizes and colors, having the time of their lives. They are all partaking in this event together, which is even blatantly called out as an ICP thing: ‘family’ and ‘clown love’. Everyone wants to belong. It is a cornerstone of our existence. Now, why someone would choose this particular ‘family’ of clowns is up for debate, but my guess is that it’s very accepting. I mean, the ‘family’ that I experience in my metal adventures is extremely picky and often downright unaccepting.

The set begins as it should, with a ringmaster…..and two grim reaper looking individuals. And then the part I feared- a bunch of people in freaky clown masks came out and danced around. There are giant containers of this Faygo thing I had been informed of earlier that week- some dark soda in liter bottles. The giant letters ‘ICP’ light up at the back of the stage. Then came the two ICP guys, and the music officially began. 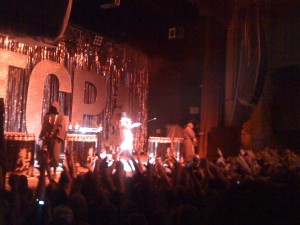 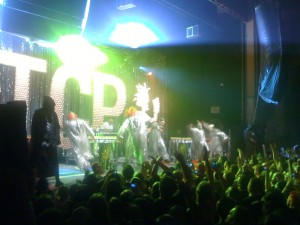 However, I could not tell you what the music was about, because I was either a) dodging Faygo bottles and spray or b) watching the crowd. So I have no idea if this magnet song that everyone was blowing up my twitter about even happened. Granted I had to leave about an hour into it.

“This shit will blow your motherfuckin’ mind.” Seriously. People know every word, every move. A girl in the balcony is tits out singing along. Having spent my time in a NIN pit where the tambourine is the ultimate prize- here the prize is the damn Faygo bottle. Those guys- especially the bigger one- know how to tear open those bottles and shake them up so they sail high into the balcony, or spin into the crowd. I was doing ok at first, only getting a few droplets on me, but then the stageclowns brought out buckets and these watergun type things, and I got fully drenched. The shit smells, is really sticky, and I found myself wondering if the calories could be absorbed through my skin. Then they started feathering the front- the feathers stick because of the Faygo. 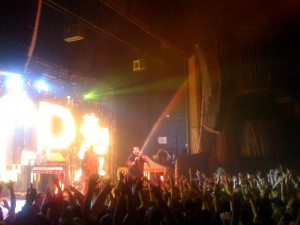 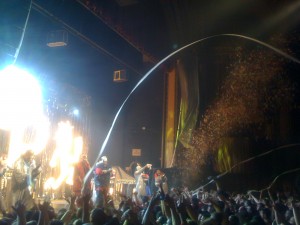 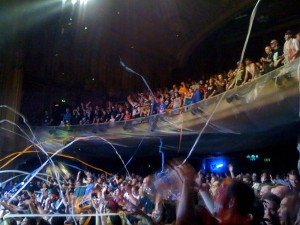 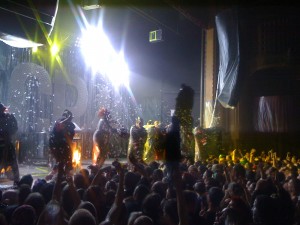 Drenched in Faygo, I had to bail. With an abundance of material, my investigative journalism piece felt complete. Did I become an honorary juggalette? No, I don’t think I’ll ever go to another ICP show again. But do I understand the allure of it? Sort of?

Yes, clowns did indeed haunt my nightmares, but my real nightmare began when I awoke the next morning.