On Tuesday morning, I was working away and took a quick Facebook break when something popped up in my feed regarding Marilyn Manson. It was about a book signing taking place within walking distance of my place in two days. It was a small miracle that was my only free night for a long time, so I snatched up the limited to 150 preorder as a piece to add to my music memorabilia collection. 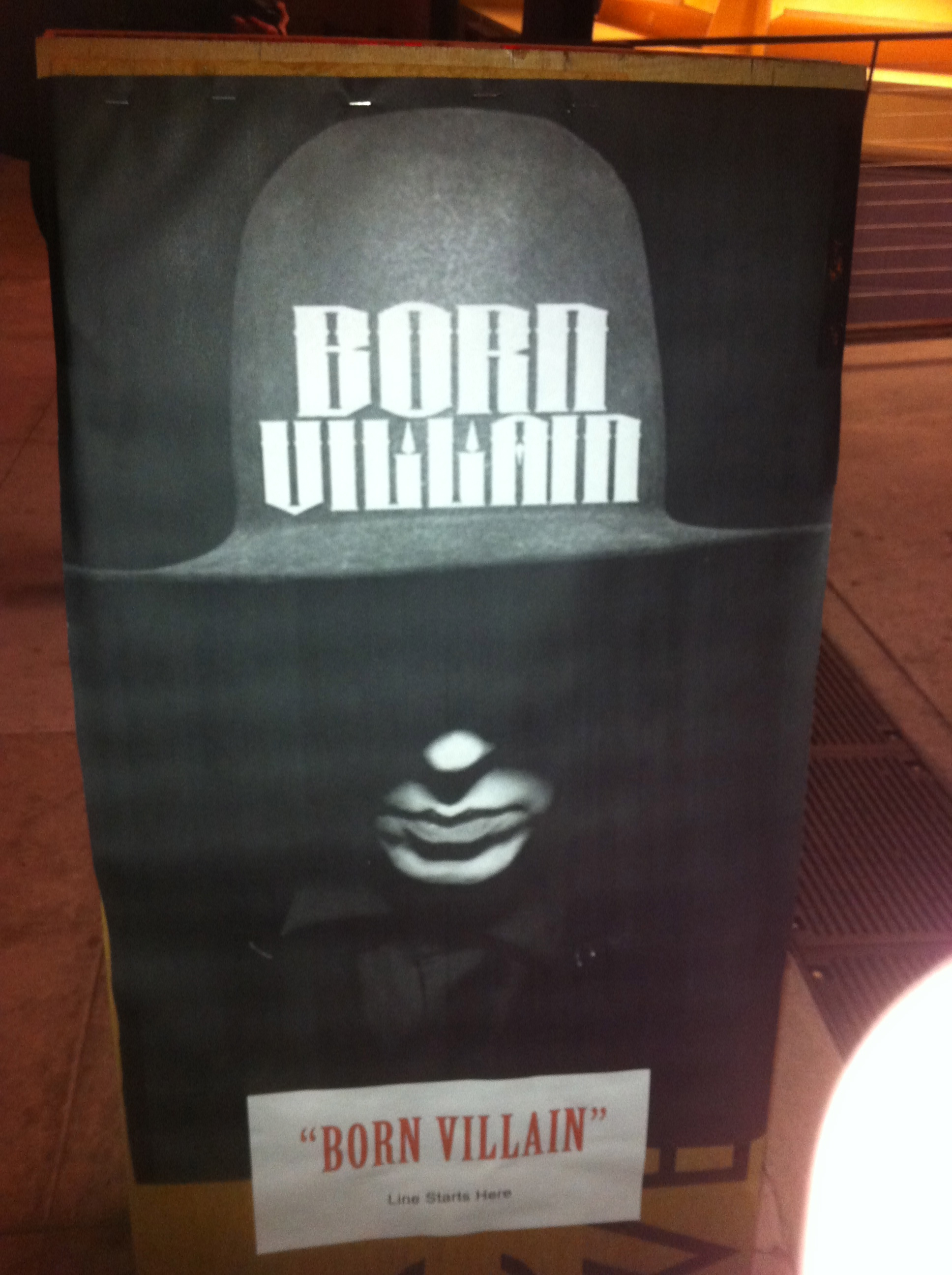 I’ve gone in and out of hardcore Manson fandom for what seems like my whole life….since I was 14 I guess. The only thing I’d really heard about him this year was murmurings about this unlikely collaboration with Shia LaBeouf and that Fred Sablan was now the bassist. The entire night and day before I went back into Manson mode…from the grittiness of those early albums, to the produced industrial masterpiece that is Antichrist Superstar…to the couple of albums with a few decent singles and hidden gems, to Eat Me, Drink Me, which I love but most people hate, to the last one, which I’m kind of ambivalent about. I’ve heard from some insiders that this next album really takes it back, and my ears are yearning for it so badly.

There are few people left in this world that actually make me a little star struck, and Manson is one of them. It’s beyond the music; it’s the whole package…I really love his artwork and his image regardless of what most people say. I think he’s an intelligent, unpredictable, and open person, and that’s why I call myself a fan. So I actually got kind of nervous before this thing!

The event was well organized and it wasn’t a terrible wait to get inside for the signing. Shia LaBeouf looks different than I expected, but he was super nice and funny. I knew of his work with Cage and I do like that video, so I was interested to see it. So I shook Manson’s hand and sort of fixated on his knuckleduster ring thing laying by him. My friend starts talking about his sharpie being blue as opposed to black and that messing up the color scheme to which he said something about black & blue. Since the color change happened while signing my book, I said I am black & blue, referring to my bruises on my arm that Manson had already spotted. And then he asked how I got them, and I said “a mosh pit”. 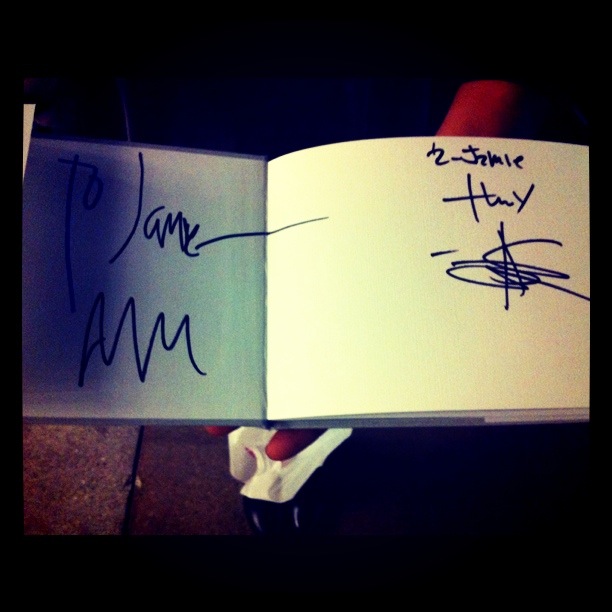 There was a brief awkward silent moment that captured both LaBeouf and Manson’s attention.

I realize that the girl standing before them in a silver pencil skirt, red Jeffrey Campbells, fake eyelashes and pin up hair did not look like the mosh pit type…but I couldn’t think of a funny lie and the duality that is the reality of my life makes for a good response I guess.

So then Manson starts saying something about how he thought I got them from not performing sexually for someone or something along those lines, at which point things became a little hazy as I tried to think of how to properly respond to this. When it was time for the photo he said to please not sue him for sexual assault, or something.

I should start a tumblr entitled ‘Things Rock Stars Have Said To Me’. 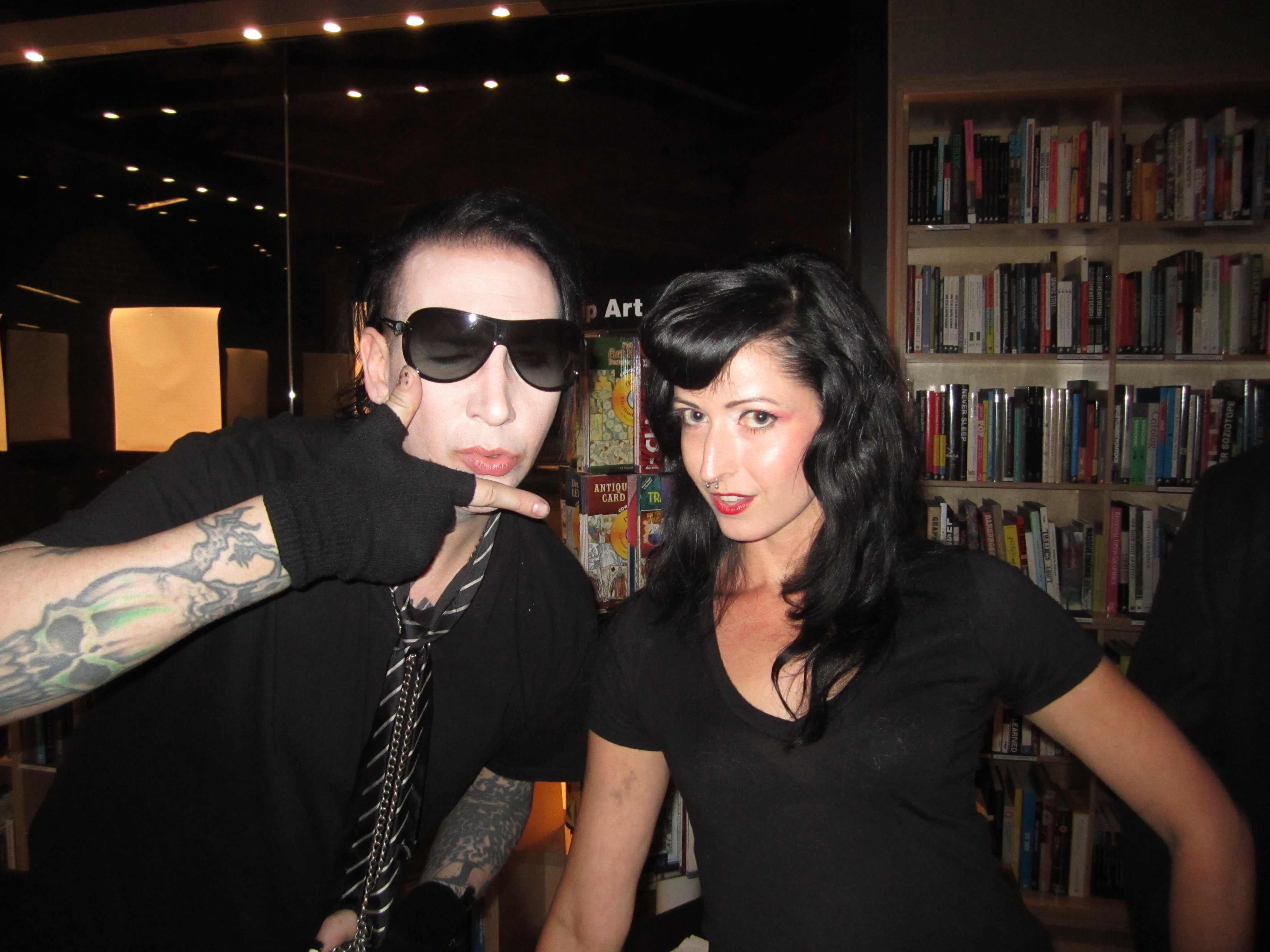 Afterwards, we gathered outside for a screening of the video…which took WAY too long to come on. I had snuck a peek earlier in the day, but it was great to see it with a group and super loud on a big screen. It’s titillating, for sure…and the music sounds promising as well, which is the most important part of it all.

It was a fun night with the Manson gang…I love the ‘freaks’ (me included) that come out and dress up for his shows…though the nurse girl infiltrated my nightmares, along with the imagery from the video and the masterpiece that I watched later that night: