Everything old is new again.

As I removed the gum from my purse in preparation for the Regency Ballroom security guidelines, I laughed at how ridiculous it is. Regardless, I was excited to return to one of my old haunts in SF for a metal show.

The experience wouldn’t have been complete if I didn’t encounter a list issue. Luckily, I happened to be on 2 band lists that evening. I get by with a little help from my friends.

I walked into the main room and was shocked by how it seemed smaller than I remembered. Then, just like old times, I walk right over to my spot, stopping to chat with my old friend Photo Ray on the way.

The crowd for Cradle of Filth is like walking into a Hot Topic convention. I have never been a fan- and only made it through a few songs last time I saw them. But I was willing to give them another chance.

I was worried when the only stage decor the opener- Daniel Lioneyes- had was a frilly white curtain hanging from the keyboard….just like the one I had in my childhood bedroom. If you’re going to do something like that, take it over the top…one piece of flair looks like someone forgot to do something. The band was actually heavier sounding than I expected based on that curtain, but the singer’s persistent addressing of the crowd as ‘ladies and dudes’ got on my nerves- even if it was in a British accent. The best part of the whole set was a few 18ish year old girls who kept squealing when any band member looked in their direction. “He just smiled at me!!! Eeeeeeeeeee!!!!” 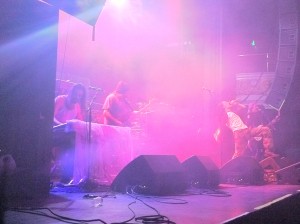 Nachtmystium are a band that I’ve been following for a few years now. I feel like they truly do something different: American black metal played through a filter of someone who grew up listening to the bands I did: Ministry, NIN, and all the grunge bands. The latest album is heavily influenced by Pink Floyd. When I first heard them, I realized this was a different kind of black metal, and I wasn’t sure if I liked it. But after reading a few interviews with Blake Judd, I got it, and I’ve been hooked ever since. This was my third time seeing them, and they’ve gotten better each time. The only thing I was caught off guard about was how much talking Judd did to the crowd….surely a consequence of the CoF fan base. I think they are a super weird fit for this bill, but, good for them.

I really tried to give Cradle of Filth another go, but I just could not get into it. There’s something about Dani Filth that creeps me out- and not in a good way- and this has been enhanced since he cut his hair. Now he looks like a demented little sprite squealing into the mic. The crowd went bonkers though. The vocals did not come across well to me, and the energy level of the performance was kinda blah….so I made it another handful of songs before saying goodbye to the Regency Ballroom again, and SF a few hours later. 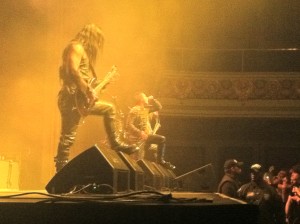 Til next time, my former home…..I left a piece of my musical heart in San Francisco.