Like the song “Keep Your Eyes Peeled”, from Queens of the Stone Age’s GRAMMY-nominated …Like Clockwork, December is the time when we start reflecting on the year. Was this a good one? A bad one? So-so?

Rock music’s still in a rocky period; we may have not had any rock stars have an infamous twerking moment, or a couple to talk about like Kim and Kanye, or an album release to buzz about like Beyonce, but this year, rockers steadily chipped away at making their mark with solid albums, loud tours, career comebacks, and iconic departures.

I could barely keep up with all of the great albums released this year. Starting with Depeche Mode’s Delta Machine, Nick Cave & The Bad Seeds’ Push the Sky Away, Atoms For Peace’s Amok, David Bowie’s The Next Day, The Black Angels’ Indigo Meadow, Ghost B.C.’s Infestissumam, and Orchid’s The Mouth of Madness, I was all set with new tunes for the year before winter was even over. But then spring sprung, and the new blossoms on the rock tree were The Dillinger Escape Plans’ One of Us Is the Killer, My Bloody Valentine’s m b v, Alice in Chains’ The Devil Put Dinosaurs Here, Uncle Acid & The Deadbeats’ Mind Control, QOTSA’s …Like Clockwork, Black Sabbath’s 13, and Kvelertak’s Meir. Then the summer heat wave brought Iggy & The Stooges’ Ready To Die, Volbeat’s Outlaw Gentleman & Shady Ladies, Soilwork’s The Living Infinite, Savages’ Silence Yourself, True Widow’s Circumambulation, Scorpion Child’s Scorpion Child, Shining’s One One One, and Palms’ Palms. and then in the fall, I fell for Watain’s The Wild Hunt, Nine Inch Nails’ Hesitation Marks, Carcass’ Surgical Steel, In Solitude’s In Solitude, MotÃ¶rhead’s Aftershock, Satyricon’s Satyricon, and Toxic Holocaust’s Chemistry of Consciousness. Between Bowie, Carcass, Sabbath, and MBV’s first albums after a long hiatus, newcomers like Savages and Scorpion Child, unexpected sounds from Watain and Satyricon, huge sophomore efforts from Ghost B.C., Kvelertak, and Uncle Acid & The Deadbeats, “supergroup” albums from Atoms For Peace and Palms, and career gems from The Black Angels and QOTSA….rock music had a lot to say.

But my favorite thing to reflect on every year are the great shows I saw. This year I focused on quality over quantity, and checked off a lot of artists on my bucket list. From being in a room with a handful of people for Rob Flynn’s of Machinehead’s acoustic set at the beginning of the year, to watching Nick Cave shout “motherfucker” in front of a children’s choir, to seeing Nirvana remnants, to the crazy production of How To Destroy Angels and NIN, to dancing on stage with Iggy Pop, to crying while Heart performed Zeppelin songs, to being amidst bonfires at Iron Maiden…this year was full of big memories. Rock music has always shined brightest in the live setting, and at a show I can become part of the magic. Full reviews of all shows are below.

Robb Flynn, On the Rox

How To Destroy Angels, The Fox Theater Pomona

Unfortunately, 2013 was a big year in losses of legendary rock musicians: Chi Cheng, bassist for Deftones, Jeff Hanneman, guitarist for Slayer, who’s public memorial I attended, Ray Manzarek, keyboardist for The Doors, Clive Burr, drummer for Iron Maiden, Allen Lanier, guitarist for Blue Oyster Cult, Joey LaCaze, drummer for EyeHateGod, and Lou Reed, vocalist and guitarist for The Velvet Underground. Sadly, I had a ticket to see Lou Reed earlier this year- it would have been my only time- but it was canceled due to illness. We also lost Storm Thorgerson, who was behind many of rock’s most iconic album covers, including Pink Floyd’s Dark Side of the Moon.

As we cross the threshold into 2014, I’ll be playing the newly added Led Zeppelin on Spotify, and listening to the new QOTSA on my record player at the wrong speed on accident…because after a year where the future met the past, and I’ve been blogging for 7 years, Tweeting for 5, Facebooking for 4, and Instagraming for 2, everything old is new again, and everything new suddenly became old. But even if it, yet again, wasn’t the most shining, solid year for rock music, rock ‘n’ roll will never die. Not on our watch. 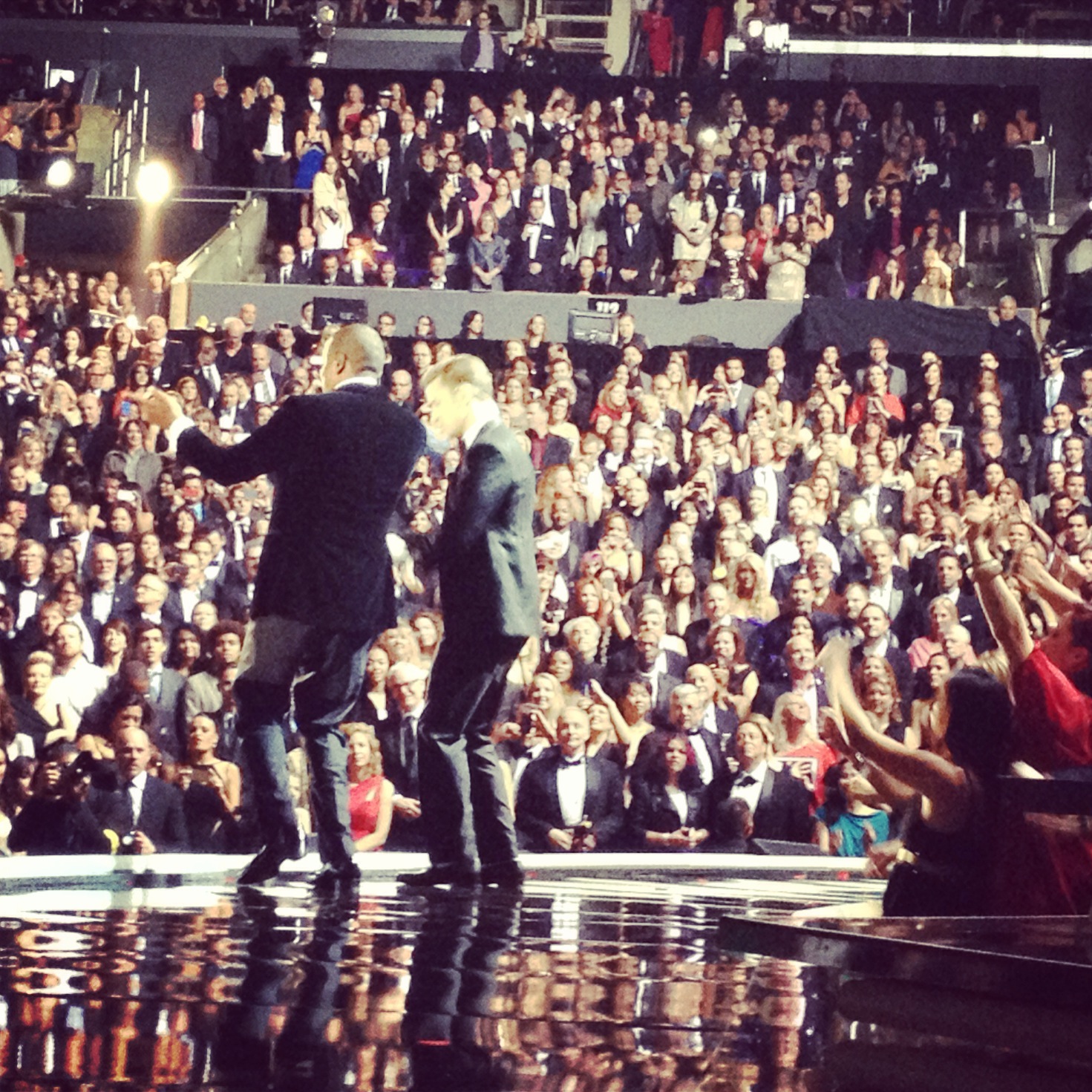