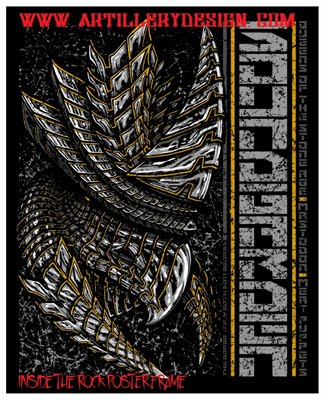 By the end of it I decided that I will never do rail at a big show again.

After years in the front lines of rock and metal shows all over the country, I have never had as trying an experience as I did when Soundgarden, Queens of the Stone Age, Mastodon, and Meat Puppets played The Gorge. But even though I may never be tweeting from the front again, it was The Show To Go Out On. 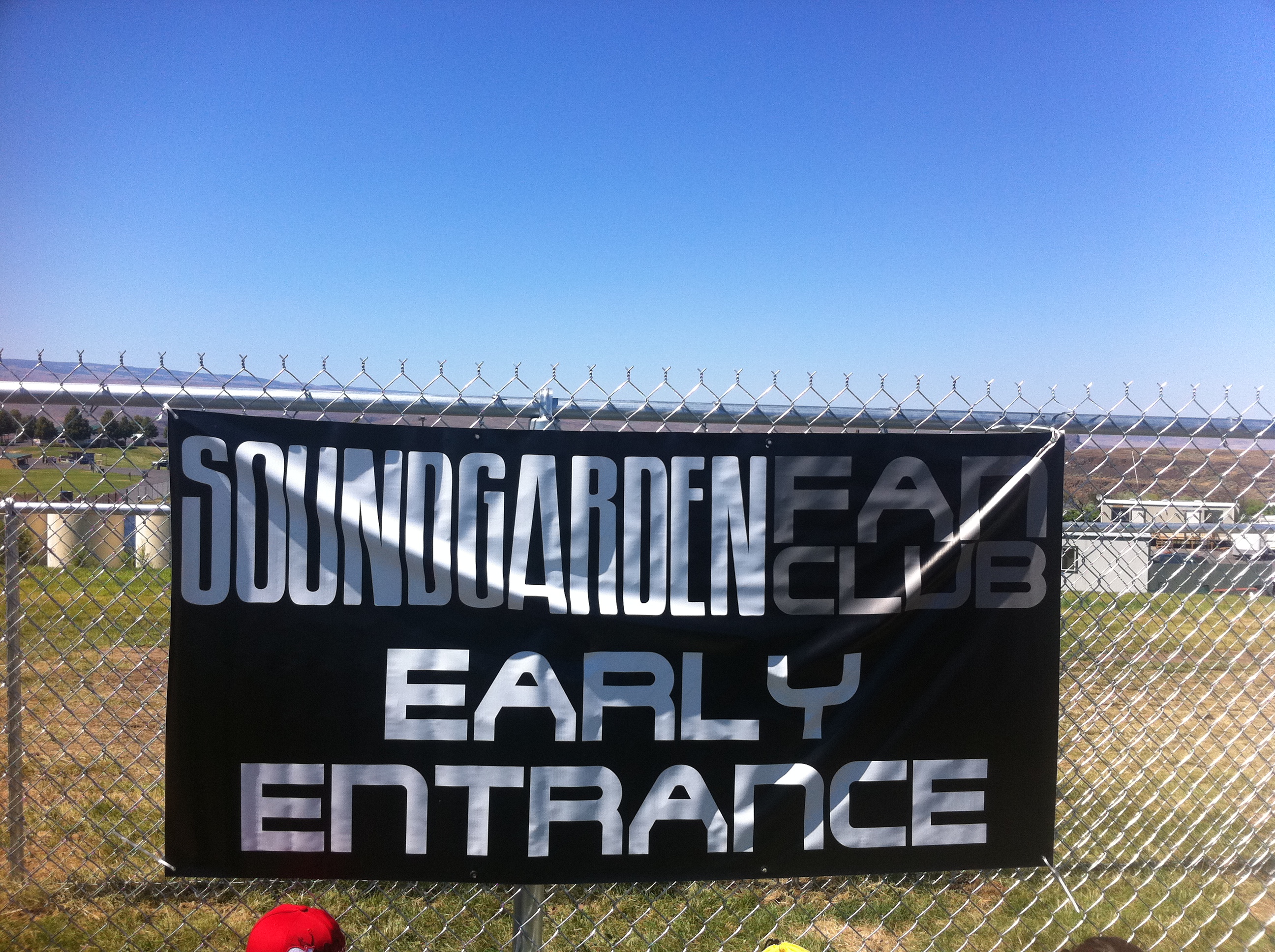 I had always wanted to go to The Gorge, and a line up like this made it an easy decision. I mean, really, how killer is that line-up?

We flew to Seattle early that day, and made great time getting to the venue, which is nearly three hours east of Seattle, in the middle of nowhere. It was about 1pm when we somehow became one of the first few people in line. Here is where the problems that plagued the day began; we had no idea it would be in the 90s and we would be waiting in the sun. We’re vets at this, but we’re ill prepared, and my goth skin was only saved by the generous sharing of sunscreen from someone in line. 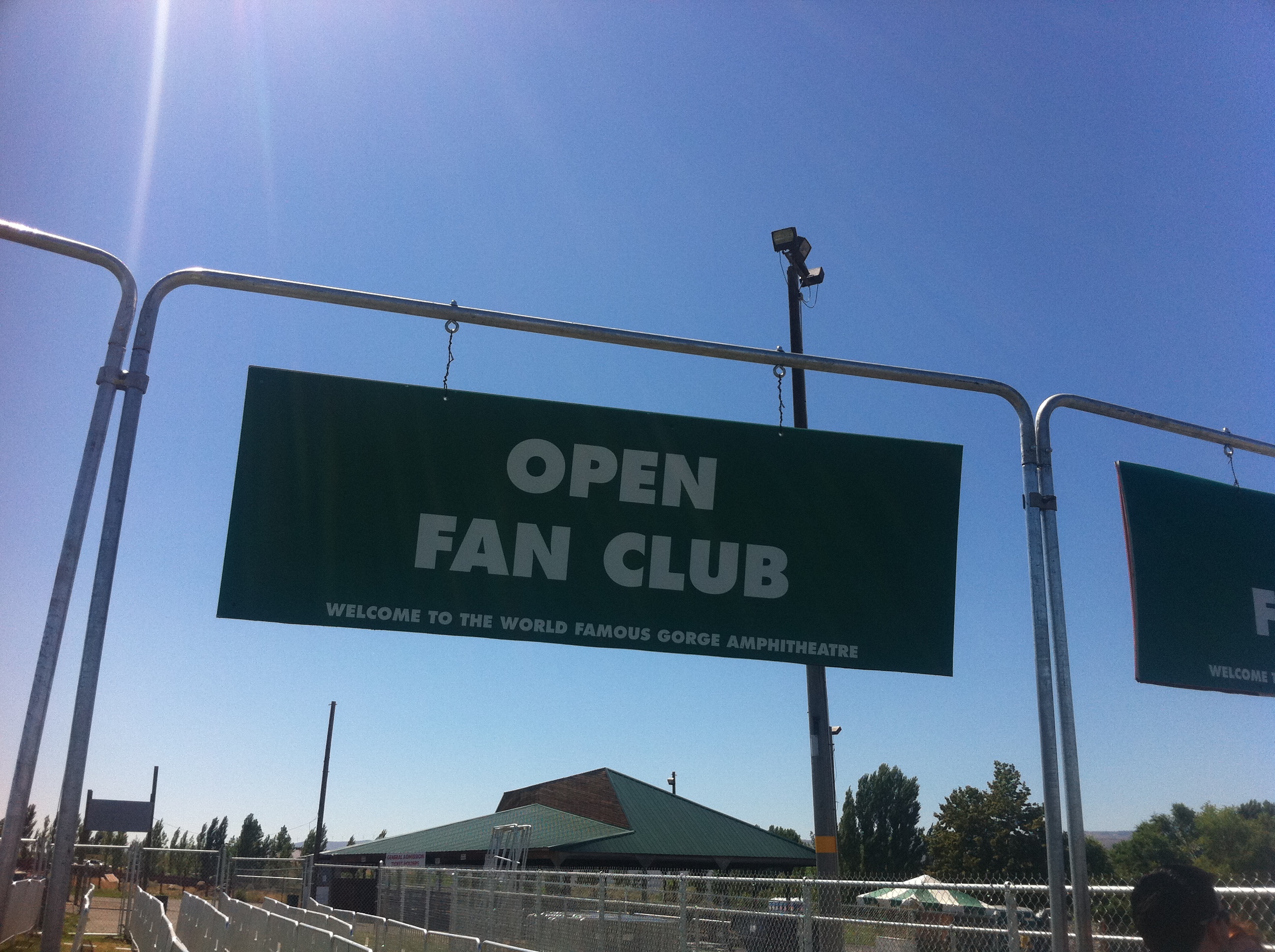 As the line moved to its first phase of security, we were held in cattle runs to really boil under the sun. I’m pretty sure dehydration set in here. And then about three hours after waiting in line, I found myself running alongside a bunch of dudes while I was wearing heeled Doc Martens- not knowing that the trek to the front lines of The Gorge are about a mile away from where I began. While I schooled a lot of those boys who were lured by women selling cold drinks, the wheezing set in (I have asthma) when I reached the top of the hill. I almost rolled down it going “as you wishhhh” but instead continued to run because I couldn’t give up now. By the time I made it to the floor, I could see MastoBrent and MastoBill on stage soundchecking and it was the only thing that got me to the spot I had my eye on. I promptly sat down on the hot concrete and spent the next hour thinking I might have to get a paramedic. You know it’s bad when strangers ask you if you’re ok….

For those of you who don’t get this, there are some of us who like the risk/reward of being up front. It’s a commitment, but it also yields some of my best work. It’s how I catch all the details, take the good pictures. But this time, before the show even began, I found myself wondering if it was really worth it. 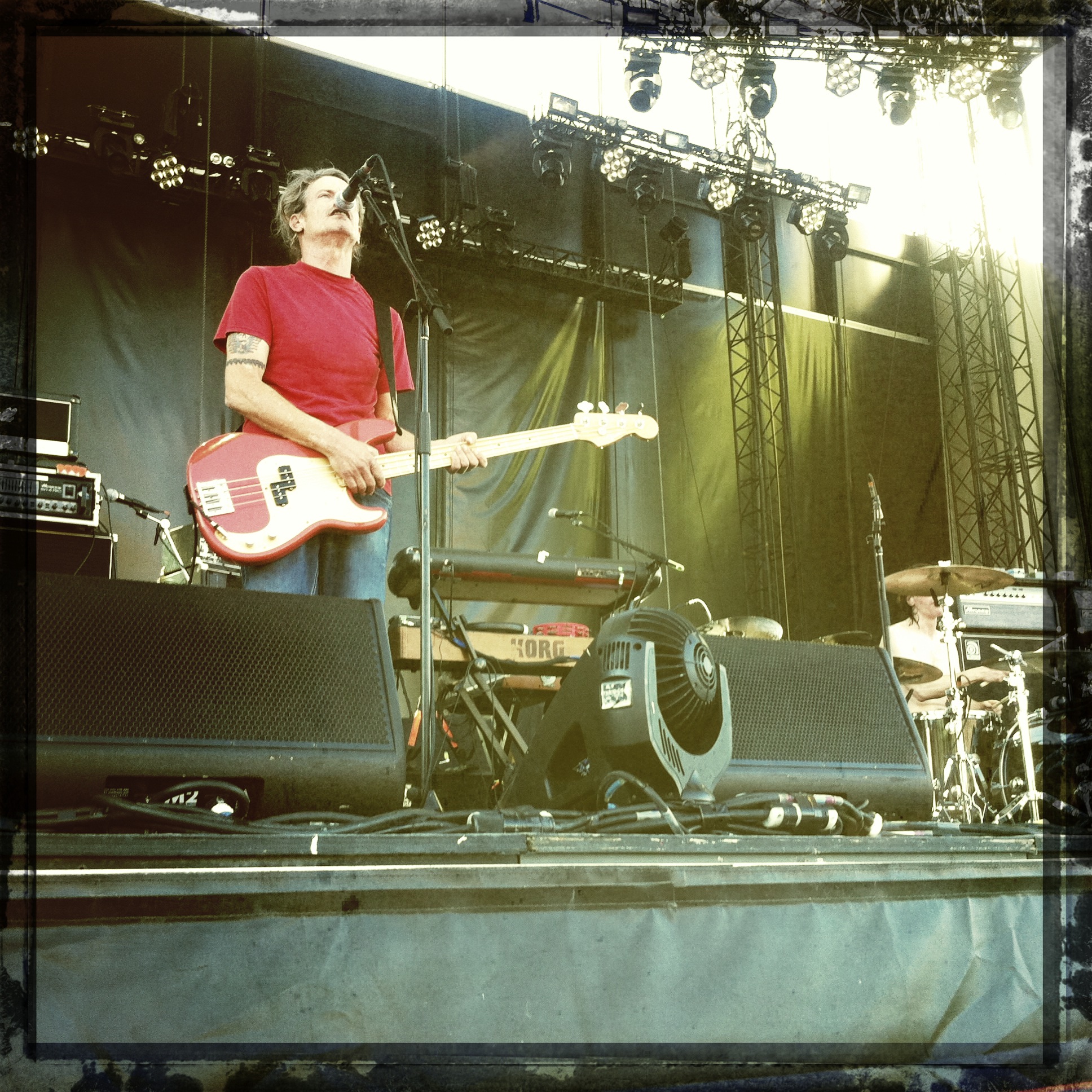 We had about two hours to wait and rehydrate and make friends with our neighbors and security before the Meat Puppets came onstage. I had seen them once before and was a little bored, but that was a not the case this time. The songs Nirvana made famous were laced throughout the set, but their other songs shined as well. While watching them, I thought about how they wore their hard living like a badge of honor, and played like they were proving that even though they weren’t one of the Big Four of Grunge, they wrote great songs, too. Unfortunately, the trouble began in this set as some drunk girls tried to push their way onto the rail, and one actually pinched my friend…who does that?! Security told us the two X’s on their hands meant they had already been cut off from drinking…the incident ended in me trying to talk my friend out of punching one in the face so we didn’t get kicked out before the show even began. 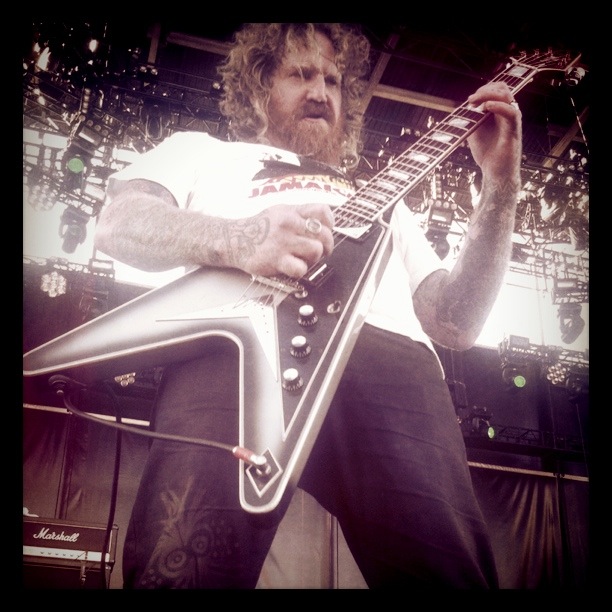 I was positively giddy as Mastodon took over the stage. This was probably my tenth time seeing them in five different states and it seems to get better each time. I was expecting them to play a song or two from their soon to release album, The Hunter, but instead they reached way back into their catalog, playing some tracks I don’t think I’d ever heard live before. Hearing ‘Bladecatcher’ was incredible live….it was like foreshadowing to how I would feel the rest of the show. The old songs gave the band a raw energy that really took over the set, which was matched by the crowd going completely bonkers. 45 minutes into what would be a five hour show, and I already felt beat up. But, man, they sounded and looked so good! You know you love a band when you have nightmares about them breaking up; they are one of those bands where every member holds equal weight to me, and I couldn’t even imagine what it would be like without one of them. Hearing a set so heavily weighted in the old material made me even more excited for the new stuff; each song feels like a masterpiece to me. You’ll rarely catch me doing air guitar at a show…Mastodon inspires me to do so. 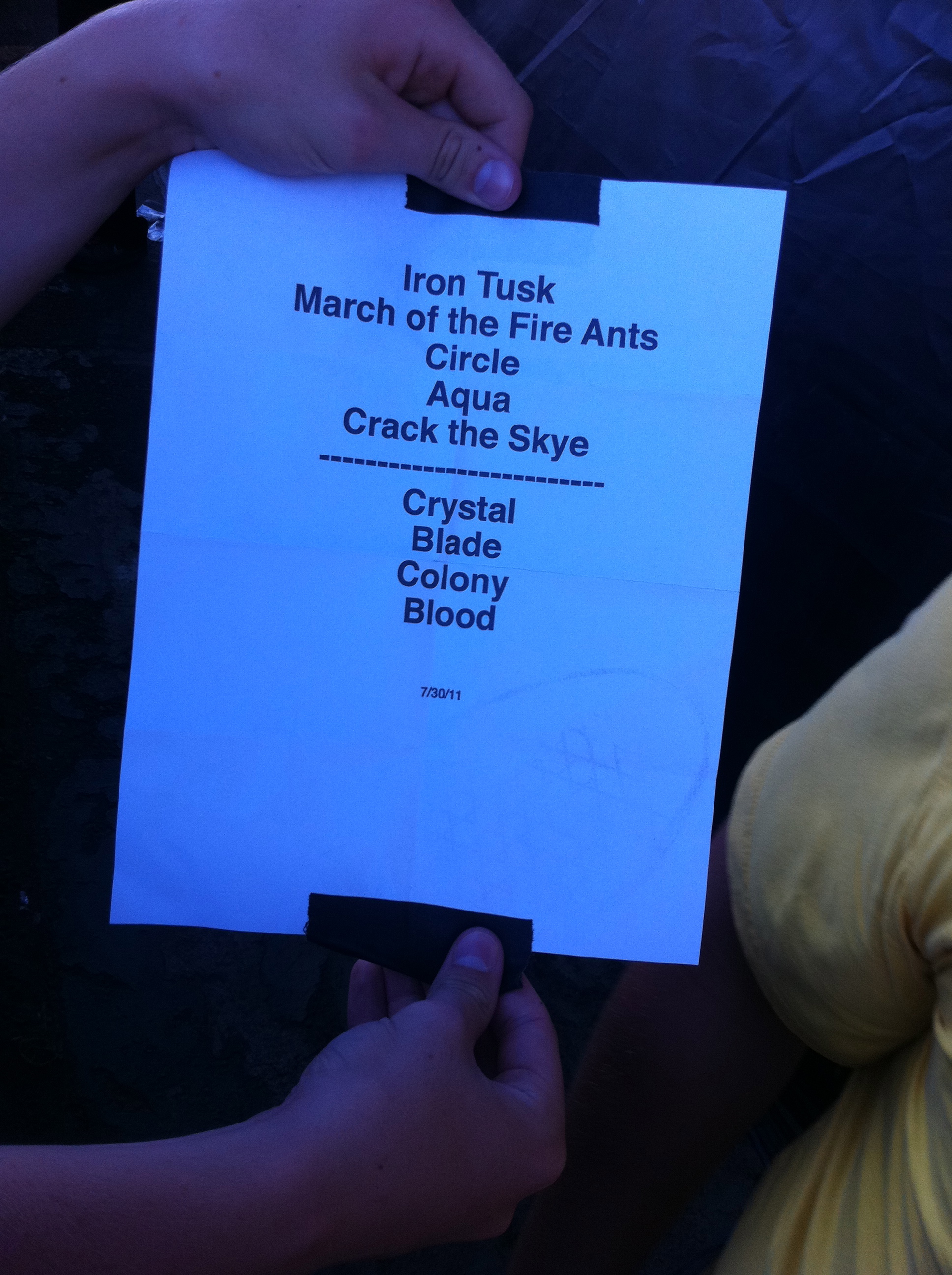 I’d seen Queens of the Stone Age a couple times over the years, but I’d never really taken to them, even though my concert mate for the show is a fanatic. This would be the show that did it for me…I get it now. One of the best things about going to shows for me is when you walk away having really fallen for a band. Now I’ll be there whenever I can. It was more than just the heat hanging in the air as the sun went down; they were on fire. So was the crowd, as we entered our third hour of getting crushed from all directions, getting kicked in the head by crowd surfers, sweating every last drop of fluid out. 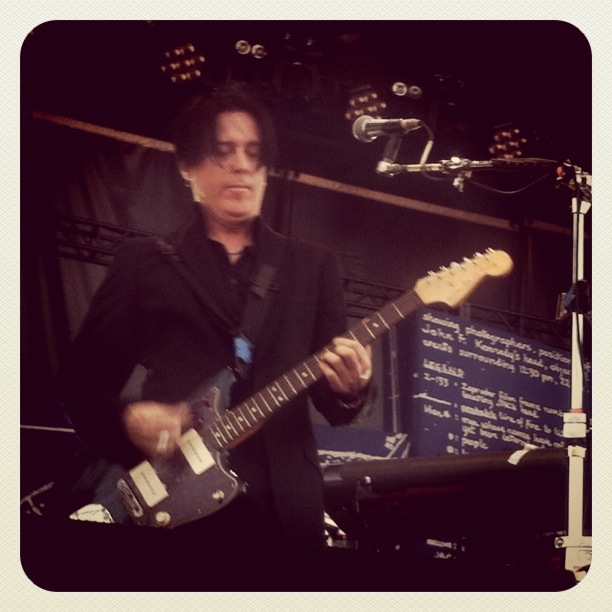 But as I basked in Troy Van Leeuwen’s guitar playing, hanging on every note as he flitted around and whipped the cord to his amp, my body started telling my mind that I should really start thinking about getting the fuck out of there. Then I’d get distracted by Dean’s keyboards or Josh’s vodka swigging, and think, I can do this. I’m supposed to be right here, right now. QOTSA exuded rock star qualities that seem more rare as each day passes.

I’m a very stubborn person, but about three songs into Soundgarden I thought this might be the show where I needed to get pulled out. I could feel blood seeping into my socks, I was starting to hallucinate. But there was really no way I was leaving, as glances between my friend and I revealed we were thinking the same thing. When you do this, it really is like going to war together up there, and somehow the two of us, two of the only girls, had to school some of the guys on how to hold your spot and deal with people who try to pry you off the rail. As soon as Cornell walked over to us, I managed to whisper “Oh my god, totally worth it!” to my friend, even though he would not touch our hands, only every single guy around us…it was so blatant it was hilarious!!! The set was very similar to LA, but they had that ‘last show of the tour’ meets home show energy about them…Ben Shepard was particularly fun to watch this evening as he brought his weird energy to our side of the stage several times. To me, he’s like Eric Avery of Jane’s Addiction, a bit of a misfit and a monster on the bass. Rumors were flying that there was a special guest…and apparently the most solid one was that there would be a Temple of the Dog reunion…but alas, nothing happened.

You can read about the Soundgarden set in a piece I wrote on GRAMMY.com here and my more detailed account of the LA Forum show here.

By the time the show was over, I could barely talk or move. The ground was littered with so many shoes and broken glasses it was unreal. We had to walk the mile uphill and back to the car in small spurts, once resting on the hill where I had a charming conversation with a bunch of guys on mushrooms who were waiting on their spaceship to pick them up. I couldn’t even think about the show as I tried to do a scan of my body to figure out what didn’t hurt, knowing something was mentally wrong with me when we got going down the road and I spent five minutes maniacally laughing about an irrigation structure that had broken in a field and shot water at us just as we drove by with open windows.

Is it time I stop killing myself for music, to get the story for the handful of people who read this? Perhaps dying at a show would be the way to go. I left traumatized enough to rethink everything.

Not sure how she did it, but my concert mate filmed this at the very end:

As I sit here and write this four days after the show, bruises are still popping up, and my neck hasn’t regained full mobility. But I can now say I’m glad I got to go through this experience for one of my ’90s bands…and I celebrated things I love from the ’90s for the rest of my time there, as we visited the Nirvana exhibit at Experience Music Project, saw the condo building Layne Staley died in, the Black Sun sculpture that inspired “Black Hole Sun”, and visited Snowqualmie, where Twin Peaks was filmed. I also visited this place: