“I killed you in me,
I’m willing to live to start over,
No sign of love, it’s obsolete,
I still feel lust in power,
I’m still on the run,
I’m still running away from you,
And in this shadow I wait for you,
Strip for you
In white light, my fearless mind,
Falling through again,
I’m invincible
In white light I see my soul, drowning in a well,
Lonely…

I’m on my deathbed…”

It came to me in a dream.

I’ve been infatuated with tattoos my whole life, but I could never commit to something that I could see myself living with on my skin for the rest of my life. I think I was having a sleepless night in a hotel room in LA, thinking about being alone and the heartbreak of my past year, and I woke up with the vision in my head of a broken heart and two long stemmed roses.

The tattoo would become another item on the list for my year of doing things instead of just talking about them….it began with my solo European pilgrimage and getting my septum pierced, and is soon to be followed by moving to LA and closing out the year with my first trip to Asia.

My mom was weird about tattoos; she always thought she spotted one on me when I’d come home to visit. In fact, when I was caring for her in the hospital after her unsuccessful cancer surgery, to get her to snap out of it once I said, “Mom, look! I got a tattoo!”, and boy did she become present to try to see what I’d done to myself. So to say that this is for her isn’t it; this is in memory of her. In a week I will not be living in the constant memory of her death in this house; I won’t be able to walk out to her grave in the yard. I will carry this mark around with me forever as a reminder of the pain that I went through. I selected the inside of my left wrist because I wanted it to be something I could easily see, and there was also something about that part of my mom that was broken. The love of her life was her horses, and she shattered her left wrist in an accident when I was a teenager. Several years later, she lost the tips of two fingers on her left hand in another horse accident in a trailer. And then there’s the notion that I feel that I’ve been left.

Layered on top of that is the perpetual state of broken heartedness I’ve been in throughout my whole life, because I’m the kind of girl who wears her heart on her sleeve. Over the past year, I’ve reconnected with the guy that I was with for over 7 years, the one I thought would be the death of me. He serves as a big brother figure nowadays, and earlier this week he lectured me about how if I continue to live my life like this, I’m going to wake up and and realize that I should have settled down and gotten married and had kids; how he thinks that potential men for me don’t see that I’m a nurturing person that would make a good partner for this tough exterior that I’ve built. Perhaps he is right, but I just can’t risk putting myself out there again. So the tattoo also works as a reminder of all the broken hearts of my past, and those that will surely come in my future.

The missing piece was to determine who I would chose to make the mark, and that happened easier than I thought. Because everything in my life revolves around music, who would be better to do it than someone in a band that I respect? I asked Trevor Friedrich, drummer for Combichrist, Imperative Reaction, Suffer Well, and more, if he would be able to do it, and the date was set for before his San Antonio Combichrist show. I absolutely love the mood and tone of his tattoos, and after giving him a minimal description- broken heart, two long stemmed roses, inside left wrist- he came back with a design that I didn’t even modify even though originally I had envisioned it to have color. It was perfect.


That said, in the days coming up to it I found myself getting really nervous about it, both on the commitment aspect and the pain. Because I live fairly far away from San Antonio, I got a room at the very cool Hotel Havana. Watching Trevor set up shop in my room probably added to the nervousness, but it really became more of an emotional affair as I noticed he has ‘mom’ tattooed on his neck. This month has been all about coming full circle after this last year: I started consulting for my old job, I’m getting ready to move back to California, and now this tattoo….it has cemented that this all really happened to me. There’s a certain discomfort in coming out of the grieving period, as the memories fade and I realize life just goes on. 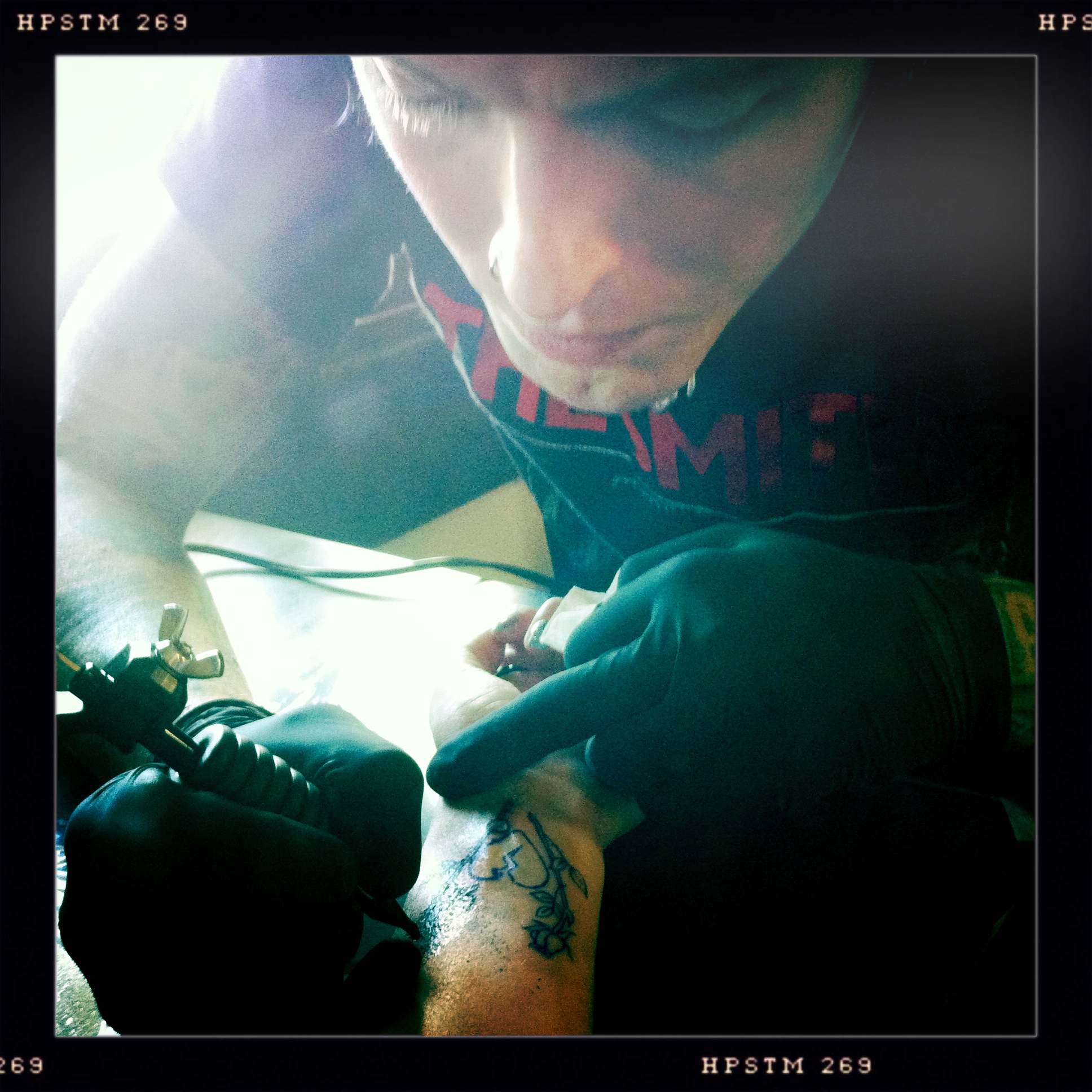 It didn’t take long after the actual tattoo began to realize that this wasn’t going to be painful for me; in fact, I kinda liked it….but I’m a weirdo like that. When you’ve spent a good part of the last year numb, it feels good to feel anything; I had insight into the psychology of cutters through this process. Trevor was very gentle and professional and I was fascinated by watching this piece of art come to life on my arm. It was a very intense, emotional experience for me….I don’t see how people just walk into a random tattoo parlor and get stuff done. My ink has 10 layers of meaning.

My soundtrack through the whole process was Nine Inch Nails, Pretty Hate Machine -> The Downward Spiral -> The Fragile…with the process literally ending with ‘The Mark Has Been Made’.

I couldn’t think of a better way to follow up my tattoo experience than with a Combichrist show.


At one point on that day, the temperature gauge in my car read 110 degrees. I couldn’t even stand the idea of going inside the White Rabbit at first, and opted to listen to Starkiller from the warm breeze at the picnic tables with friends. Then, armed with a $2 vending machine water bottle since they don’t sell it inside, we braved the pit for Ivardensphere. Two guys stomped in unison in front of their electronics in butcher’s aprons and gloves; sweating to the beat since they were ‘from the frozen tundra of Canada’. It was already disgusting in there, and the hypnotic music was making me woozy. I could tell this show would be like an exorcism of sorts; I was often reminded of the new tattoo as little fits of burning sensations shocked me as I sweat under the plastic.


By the time Combichrist hit the stage, the air hung so thick with the fog and the sweat of the attendees that it was almost suffocating. Between the evil rabbit painted on the wall behind the stage, the unicorns adorning Joe Letz’s drum kit, and the scene hair of the girls in front of me, my muddled mind was lost in the idea of this industrial adult playground for the My Little Pony generations of kids like me who grew up to be ‘different’, until the words of ‘Shut Up and Swallow’ invaded my ears.

I’ve written about Combichrist many times in this space; they are one of my favorite live bands. After seeing them the previous weekend with Rammstein, I spent a lot of the set thinking about whether or not I like the presence of Abbey Nex as a guitarist. At first I didn’t feel like it really added much to the set; I couldn’t hear anything additional really and I constantly felt compelled to hop up on stage and close his mouth for him. But by the end, he had melted into being part of the band, kind of like we were all melting due to the heat.

The White Rabbit is lawless; one girl watched the set standing on the lip of the stage in front of a speaker no questions asked; others easily hopped up on the barrierless stage to crowdsurf….if they took too long they were escorted off, or received an assisting push on the butt by lead singer Andy LaPlegua like one girl did.

About half way through the set I was taken by the sensation that someone was standing too close to me, and that was quickly followed by some grinding action that was also quickly followed by me moving the fuck out of that guy’s way to let him by. It’s one thing if it’s a packed house and you can’t help it; it’s another to stealth grind on me without being invited first when there’s plenty of room around….next time, dude, at least time it to ‘Fuck Machine’.

The encores became a blur of sweat, unicorn piÃ±atas, crowdsurfing band members, and flying drums. It was one of those I-want-it-to-keep-going-but-need-it-to-stop-before-I-pass-out shows. As the industrial beats played on in my head, a shower never felt better as I washed away everything but the new part of me. 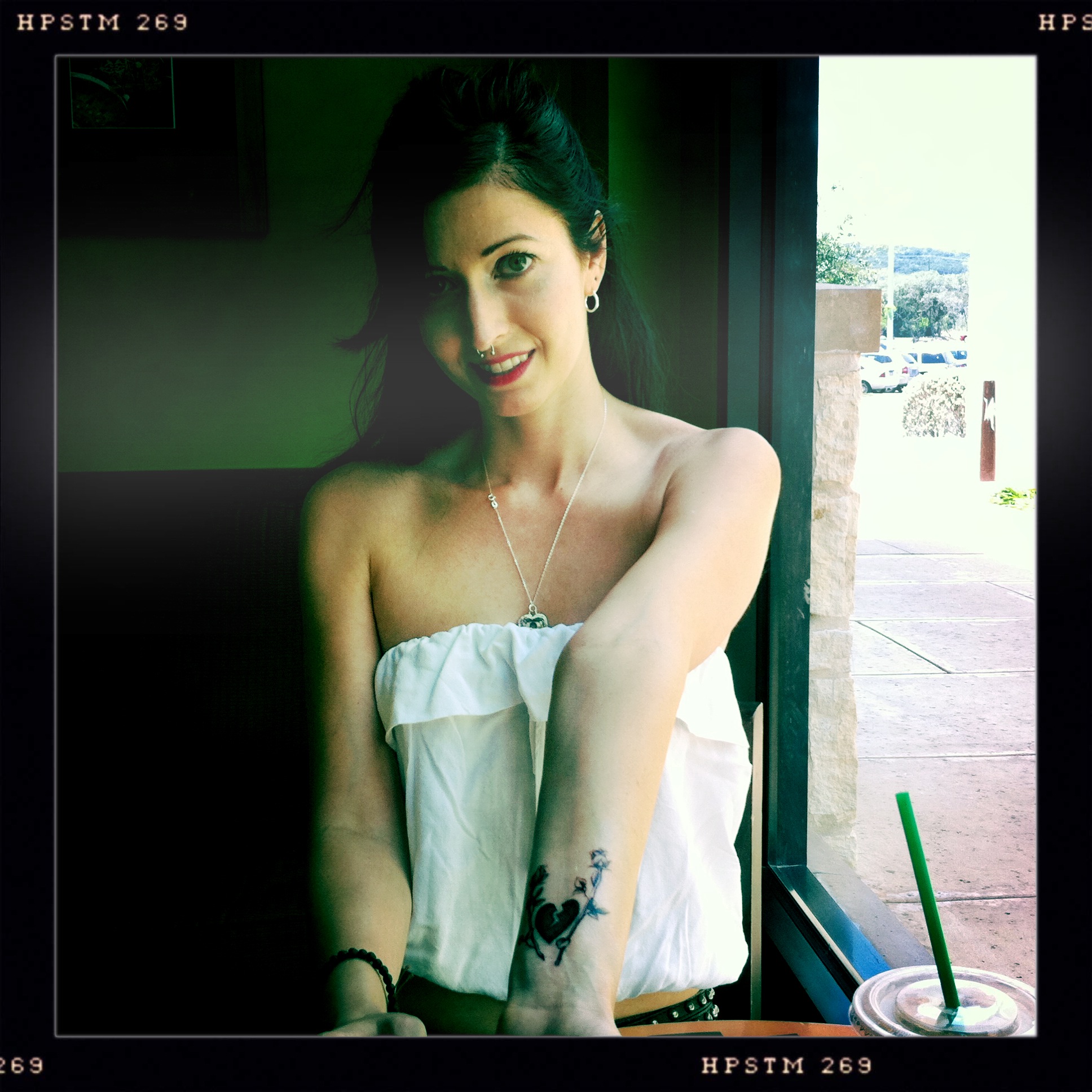